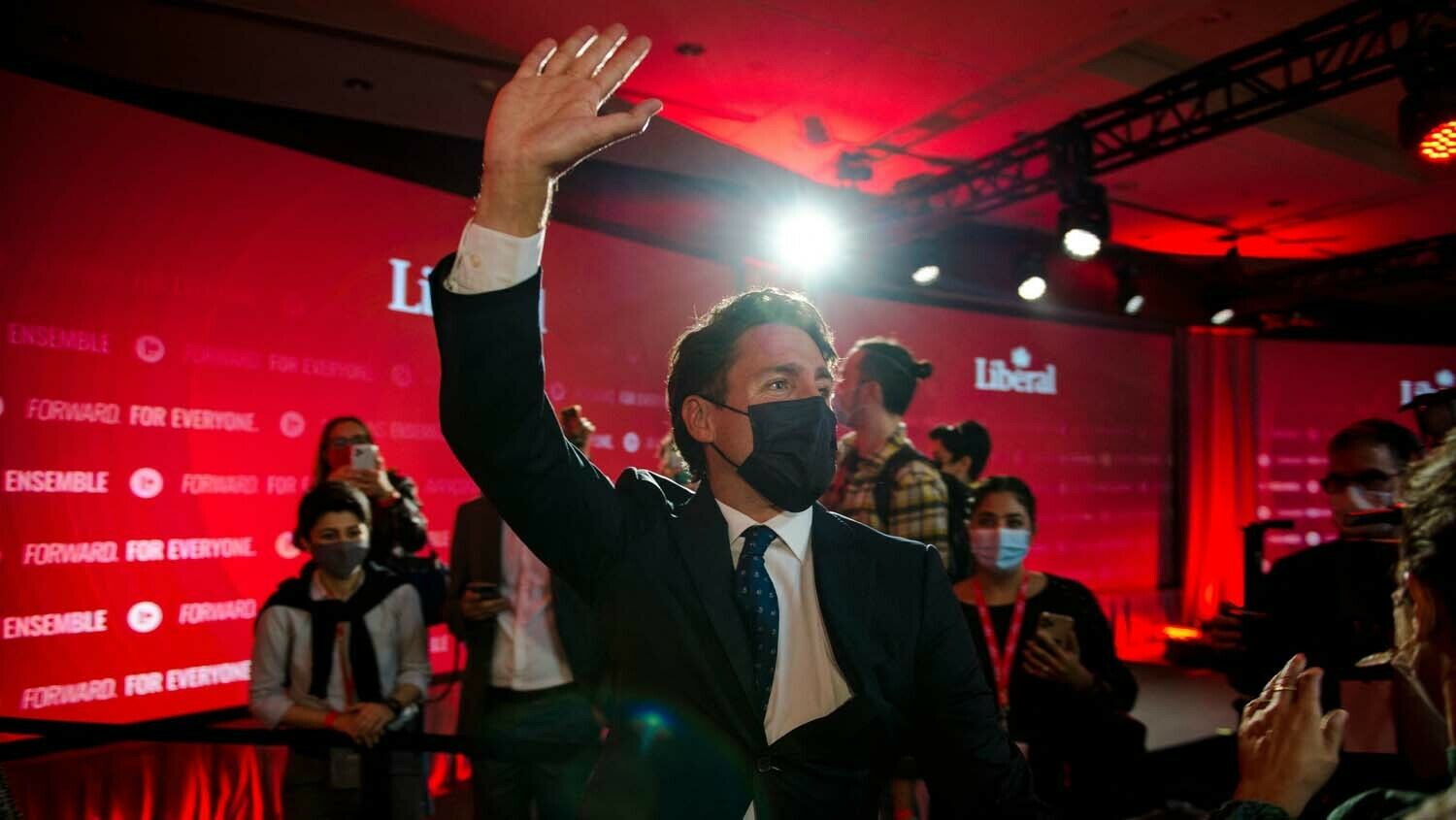 Irregularities are beginning to emerge from the 2021 election.

During the current political crisis, Canadian Prime Minister Justin Trudeau declared before the House of Commons that any views of the Freedom Convoy were irrelevant because the Canadian people at the last election gave the Liberals a mandate to continue vaccine requirements and lockdown measures. Trudeau also referred to the Freedom Convoy as a “fringe minority,” not representing the views of most Canadians.

The last election in Canada took place in September 2021. It was a snap election called during the peak of the delta wave. It was Canada’s first pandemic election, which saw unprecedented measures in mail-in voting, an emphasis on disseminating election disinformation, and covid-19 rules that limited capacities of polling stations.

The Liberal Party won 160 seats; the Conservatives, 119; the Bloc Quebecois, 32; the New Democratic Party, 25; and the Green Party, 2. This allowed the Liberals to form a minority government.

Did Trudeau win a majority mandate from the Canadian people? Did Trudeau even win the election fairly? There is growing evidence of election irregularities that benefited the Liberal Party of Canada—and Trudeau has a history of corruption since becoming prime minister.

The first irregularity is foreign interference. It is beyond reasonable doubt that China interfered in the Sept. 20, 2021, election to benefit Trudeau. DisinfoWatch did an in-depth report on the irregularities and stated: “After analyzing available open-source data and consulting with key stakeholders, we believe that the timing and content of narratives indicate the likelihood of a coordinated influence operation targeting Chinese-Canadian voters.” The Conservative Party has indicated that 13 electoral districts were affected by Chinese intervention.

The 13 districts include some the Conservatives were not competitive in, but some of the results saw long-time Conservative members of Parliament lose their seats by surprising margins. There is also a correlation between the candidates targeted and their stronger views criticizing China.

Some of the interference was obvious, such as Chinese ambassador to Canada Cong Peiwu warning Canadians not to elect parties that “smear” China. The Chinese Communist Party-run Global Times had an editorial priming a “strong counterstrike” if the Conservatives won.

“The Chinese government has repeatedly demonstrated its readiness to advance its interest in Canada by directly manipulating Canadian political debate and policy through the use of disinformation, threats, intimidation and influence operations directed at Canadian diaspora groups,” continued DisinfoWatch. “Such interference threatens to undermine the integrity of Canadian democracy and erode public trust in our democratic processes and institutions.”

A specific attack was directed against Conservative candidate Kenny Chiu for Steveston–Richmond East in Vancouver. The main method of attack was through the Chinese WeChat social media app, which over 1 million Chinese-Canadians use. Chinese state-controlled media published misinformation on Chiu and the Conservative Party and propagated it on WeChat. “A recent report published by the Atlantic Council’s dfrLab identifies an organization named HuayiNet as a ‘principal actor behind the Canadian election case,’” DisinfoWatch wrote. “According to the report, HuayiNet offers translation services and works very closely with China’s consulates and groups linked to the United Front Work Department, a Chinese government external propaganda organization that is active in Canada. One WeChat account associated with HuayiNet is named torontolingshiguan (Toronto Consulate in Chinese). … The torontolingshiguan account reposted the disinformation article targeting Kenny Chiu on September 10, one day after it was posted to WeChat.”

This method was used several times in the 13 districts. Chiu led Steveston–Richmond East in many polls, but the election results saw a dramatic double-digit swing to the Liberal candidate. This happened in other districts as well. “South China Morning Post correspondent Ian Young also noticed a phenomenon of heavily Chinese-Canadian districts turning dramatically against the Tories,” the National Post wrote. “Richmond, Canada’s most Chinese city, bucked national trends by defeating Richmond Center Conservative M.P. Alice Wong—despite the fact that she won the riding by more than 20 points in 2019.” The Liberals generated more votes in metro areas than anyone expected.

This was not the only irregularity during the 2021 election. The other outstanding feature of the 44th Canadian General Election was the massive increase of mail-in voting: 1,274,447 mail-in ballots were issued for those living in Canada, residents outside of Canada, and members of the Armed Forces. Elections Canada published a report that indicated 205,000 mail-in ballots were not counted, even though they were requested. Some of these ballots were late or not returned, and should not have been counted.

The irregularity is in the 123,000 mail-in ballots that were delayed being sent to voters until less than one week before election day. That left little chance that any of those ballots could be returned in time. Why were so many ballots delayed being sent to voters? That proves to be a decisive amount of votes in a tightly contested election. According to official Elections Canada data, 34 electoral districts had a margin of victory of 2,000 votes or less. The margin of victory in those districts totals 33,665 votes. In 21 of those districts, the Liberals won.

Another interesting facet to the data is that within these 73 districts a majority are in strategic urban districts. Thirty-three of the districts are in Ontario, a majority in the Greater Toronto Area, which alone has 50 districts. And Trudeau managed to win nearly all of them and gain the main power bloc in the 160-seat minority government.

This correlates with other irregularities that were specifically observed in Toronto, as the Election Canada report states: “In Toronto, 15 electoral districts had 448 fewer polling places than in the 43rd general election. In some of these electoral districts, the number of polling locations decreased by 75 percent, and the available polling places were not big enough to set up individual voting desks for all required polling stations.” In one Toronto district, Mississauga–Streetsville, 1,589 mail-in ballots accumulated outside a mail room not controlled by the elections officials, and therefore could not be counted. Did that occur in other districts across the country?

The Western Standard reported: “In other cases, building owners who agreed to lease space to Elections Canada for polling stations withdrew the contracts. ‘This forced returning officers to identify new places and secure leases within a very short time,’ wrote staff. As a result, the number of polling stations across Canada was cut 7 percent and ‘resulted in bottlenecks and lineups,’ said the report.”

This might help explain why there was a record-low turnout of 17,034,243 voters out of 27,366,297 registered electors. Despite that, the Liberal Party was able to win all of the close races it needed to despite losing the popular vote. The Liberals had a total of 5,556,629 votes while the Conservatives finished with 5,747,410 votes, a difference of 190,781 votes. Why did all of these irregularities favor Justin Trudeau?

This data raises more questions than the answers provided by Elections Canada. The only way to know if there was election fraud is to have a full audit of all the mail-in ballots, practices and foreign interference.

The Trudeau government has a constant pattern of corruption since he took office in 2015. First was the aga khan scandal, where Trudeau vacationed on the aga khan’s private island and used his helicopter—after the Aga Khan Foundation received millions of dollars from the federal government. In 2018, allegations of Trudeau groping a female reporter surfaced. Then in 2019 several photos emerged of Trudeau wearing blackface from different points in his life. There was the snc-Lavalin Affair, in which Trudeau attempted to change prosecution laws so indicted executives at the company could accept a plea bargain and not face prosecution. He then interfered with the investigation by Attorney General Jody Wilson-Raybould. Trudeau lied several times, and several prominent officials were forced to resign.

In 2020 came the WE Charity scandal, in which the prime minister directly influenced a decision to send a nearly $1 billion contract to the WE Foundation in which his family, and then Minister of Finance Bill Morneau, had financial interests. “Morneau’s daughter works for WE. His other daughter has spoken at WE events,” the National Post wrote. “And he’d been on trips paid for by WE in 2017—Morneau has since paid back the $41,000. As for Trudeau, his family has been involved with and paid by WE. WE initially denied they had paid Trudeau’s mother, Margaret, his wife, Sophie Gregoire Trudeau or his brother, Alexandre. As it turned out, Margaret has been paid $250,000 for speaking at 28 events, and Alexandre received $32,000 for speaking at eight events.” This was the third ethics investigation into Trudeau in five years. The prime minister prorogued Parliament in order to shut down the investigative committee once damning documents were made public.

Many members of Parliament have had to resign for far less, but Trudeau remains in office and has just invoked more emergency powers. Trudeau was elected with only 32.6 percent of the popular vote, which is an all-time low. Only 14.6 percent of all Canadians voted for him. Does Trudeau really have a mandate from the people to suspend civil liberties? Why would a legitimately elected leader take dictatorial power if the Canadian people truly did support him?

All of these questions need to be answered. Trumpet editor in chief Gerald Flurry has written extensively about fraud in the 2020 United States election. “Mail-in ballots open the door for terrible fraud,” he wrote in the January 2021 Trumpet issue. “A great deal of disturbing evidence has been emerging of voting irregularities and fraud—and it always favors Joe Biden!” We are seeing the same trend in Canada with Justin Trudeau. More evidence is being exposed of corruption at the highest levels of government.

All over the world the radical left is being exposed. In “Barack Obama Exposed,” Mr. Flurry wrote: “But I believe the tide is turning. We are about to see a sizable amount of this corruption brought to justice.” Bible prophecy reveals these crimes will see the light of day. The corruption of the radical Trudeau government is being exposed. Will we learn about more election fraud in Canada?