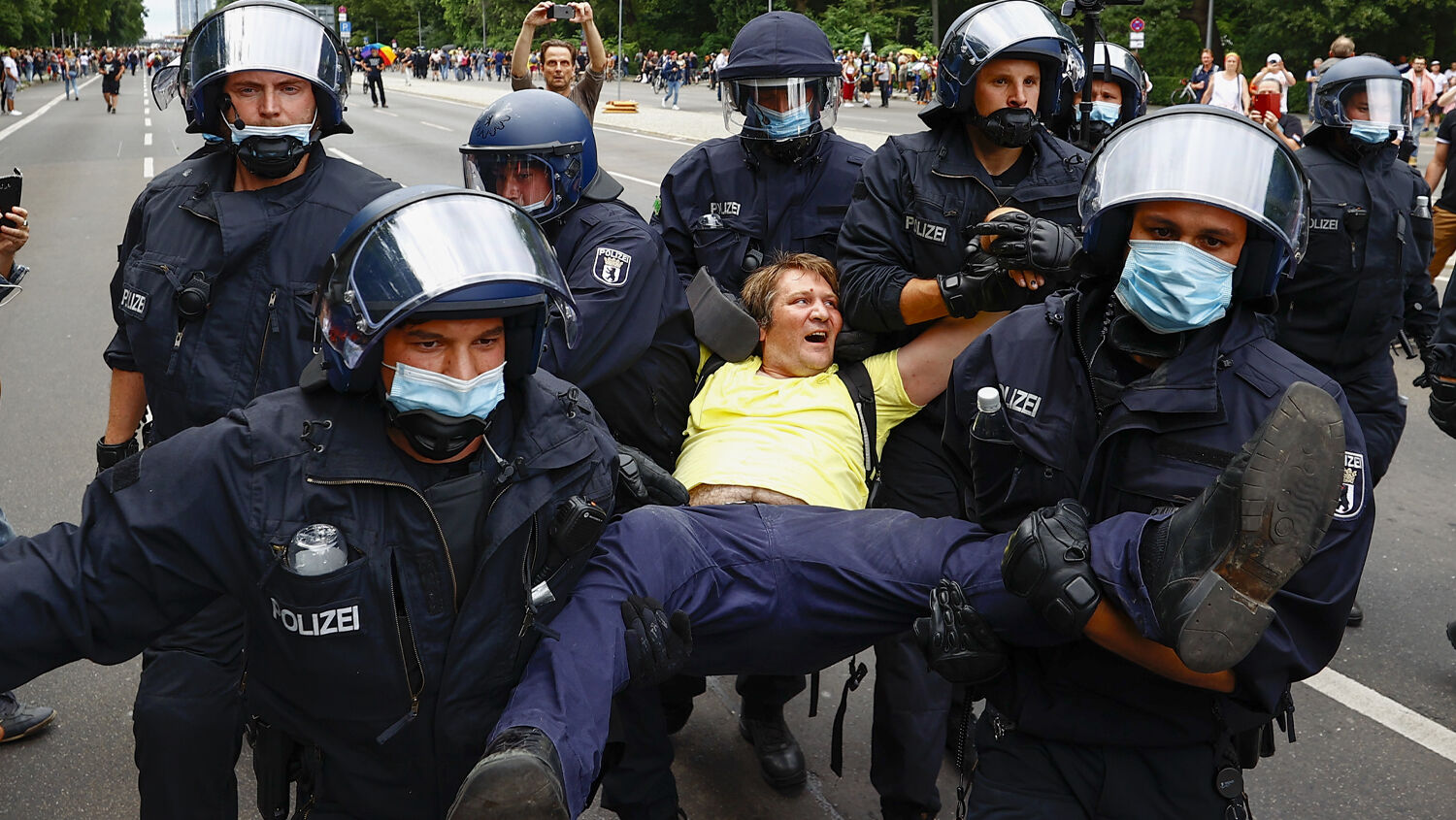 Police officers intervene in anti coronavirus vaccine protesters during a demonstration against the covid-19 restrictions of government in Berlin, Germany on August 01, 2021.
Abdulhamid Hosbas/Anadolu Agency via Getty Images

Where is our world heading?

Every fourth German believes his or her country is heading toward a dictatorship. This is according to figures presented by Hermann Binkert, managing director of the social research institute insa to members of the Christian Democrats in the European Parliament on January 18. Many of the recent fears appear to be a result of coronavirus measures.

Germany’s Welt am Sonntag spoke with Binkert about his findings. Of the 2,130 respondents, 20 percent of West Germans and 30 percent of East Germans considered democracy under threat. The survey also found that about 15 percent are considering emigrating from Germany. Politicians like Bundestag Vice President Wolfgang Kubicki (Free Democrats) and Sahra Wagenknecht (Left Party) believe that doubts about democracy have increased due to the coronavirus measures.

“There is a real danger that a large number of people will turn away from democracy because they no longer perceive the government’s coronavirus measures as pandemic countermeasures, but as educational measures,” said Kubicki (Trumpet translation throughout).

A representative survey conducted by the market research institute YouGov for Welt also found that 46 percent of Germans believe that it is no longer possible to express one’s opinion openly in Germany. Eighteen percent of Germans said they are prepared to take part in protests if the coronavirus measures were to last longer. In the 35-to-44 age group, the survey found that almost 30 percent shared that view.

This is not surprising. German Health Minister Karl Lauterbach said in an Agence France-Presse interview: “In Germany, it’s not enough just to get on the nerves of the unvaccinated, you have to do more. I am a very clear supporter of a general vaccination obligation.” On February 8, Lauterbach expressed fear that 400 to 500 people would die per day, instead of 100 to 150, if Germany were to ease lockdown restrictions. He noted that these were his own calculations. Due to the mass hysteria and propaganda, a slim majority oppose easing lockdowns anytime soon.

However, an analysis of numerous studies from all over the world published by the renowned Johns Hopkins University found that lockdowns in Europe and the United States have had virtually no effect on the number of coronavirus deaths. According to the studies, the coronavirus death rate was reduced by only 0.2 percent. This small percentage is far outweighed by the number of deaths caused by lockdowns.

Is it any wonder that trust in the parliamentary system is eroding?

Tens of thousands have protested in the streets, but so far to no avail. The media has portrayed protesters as a fringe group with extremist ideologies. But much evidence indicates that it is Germany’s middle class that is marching in the streets, as Welt noted in “Germany’s Angry Center: A Dark Field.” The article quotes cultural scientist Piotr Kocyba of the Berlin Institute for Protest and Movement Research (ipb) saying: “No one can seriously tell you how many people take to the streets and how many registered and, above all, unregistered events take place up and down the country.”

The protest movement is ignored and in some cases various videos show protesters brutally beaten down. Others are surveilled. Many people already feel like they are living in a dictatorship. Their lives are curtailed, and no matter how they vote, the situation remains the same. While millions are deeply concerned, millions more have grown accustomed to dictatorial measures and appear to follow like sheep.

That’s exactly what Trumpet editor in chief Gerald Flurry warned about at the start of the pandemic. “European leaders are increasingly behaving like dictators and assuming dictatorial power,” he wrote in “Coronavirus and the Holy Roman Empire.” “The people of Europe are being conditioned to accept more tyrannical leadership. Yet these rising strongmen are not yet united as the Bible says they will be. The Holy Roman Empire yet lacks its overarching leader.” Many Bible prophecies for our time are about to be fulfilled in a dramatic way. Even many Germans appear to sense what the Bible prophesies is about to happen.

Daniel 8:23-24 warn about the rise of a dictatorial leader in Europe: “And in the latter time of their kingdom, when the transgressors are come to the full, a king of fierce countenance, and understanding dark sentences, shall stand up. And his power shall be mighty, but not by his own power, and he shall destroy wonderfully, and shall prosper, and practise, and shall destroy the mighty and the holy people.”

As explained in A Strong German Leader Is Imminent, a German strongman is prophesied to hijack Europe. Interestingly, Germany’s current government is extremely unpopular. German Chancellor Olaf Scholz’s popularity fell by 17 points in January. This is “a negative record for the Federal Republic,” Welt noted.

Prophecy foretells that the fears of many Germans are justified: Europe is heading for another dictatorship. The warning signs are in both domestic and foreign policy. The stage is set for a tyrant to rise. Yet people know little about what this will mean for the future. Most everyone ignores the Bible’s warnings. I encourage you to request a free copy of our booklet A Strong German Leader Is Imminent to learn about the truth revealed in the Bible and how it needs to change your life.