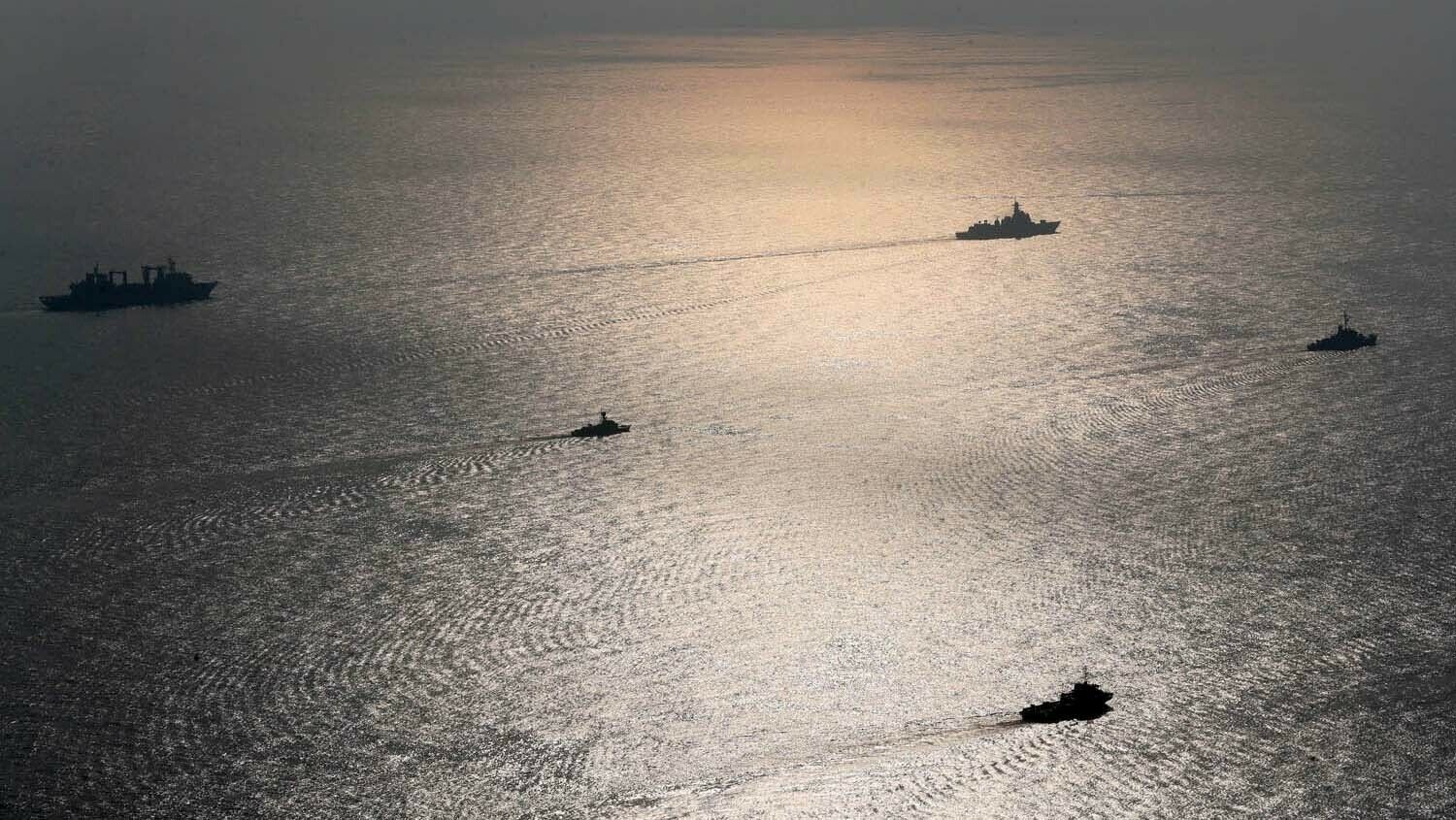 Iranian, Russian and Chinese warships during a joint military drill in the Indian Ocean on January 21
Iranian Army office/AFP/Getty Image

Supporting the North Korea of the Middle East

Iran held naval drills with Russia and China in the northern Indian Ocean on January 21, the third such drill since 2019. The exercise parallels talks held two days earlier between Iranian President Ebrahim Raisi and Russian President Vladimir Putin. Increasing cooperation between Iran, Russia and China threatens commercial traffic in the Persian Gulf and could greatly embolden the Islamic regime.

According to Reuters, the exercise involved training Iranian armed forces for “releasing a hijacked vessel.” This involves rapidly approaching the target vessel by helicopter or ship, then boarding, storming the narrow confines of the ship, and seizing control as quickly as possible. The Islamic Revolutionary Guard Corps Navy has been known to employ these tactics—not to rescue hijacked vessels but as the hijackers themselves. 2021 saw several hijackings of tankers and even a lethal drone attack by Iran.

“Anti-piracy” tactics were also practiced in similar exercises held in 2019, according to the Jamestown Foundation.

Beyond the military front, economic cooperation is also deepening. Tehran and Beijing signed a 25-year strategic partnership agreement in March 2021. This deal injected $400 billion into Iranian infrastructure and drew Iran into the China’s Belt and Road Initiative. Iranian Foreign Minister Hossein Amir-Abdollahian visited Beijing on January 21 to discuss it further. Raisi met with Putin on January 19 to discuss increasing security cooperation. “We have presented to our Russian friends a draft of our vision on the strategic agreement between both countries,” stated Raisi. “We have been confronting the United States with Russia for 40 years.”

At first glance, Russia and China supporting Iran may seem illogical. Analysts point out that it could damage China’s attempts to gain favor with other Middle Eastern nations. Iran has little to offer Russia and China economically. “While China needs Iranian oil to enable Beijing’s key political priorities of economic growth and domestic stability, the bilateral dynamic is asymmetric: China supplies nearly a quarter of Iran’s foreign trade, while Iranian trade represents only 1 percent of Chinese imports,” wrote Jamestown in 2020.

Oil is Iran’s most important export (69 percent of the Iranian export economy). A quarter of it goes to China. Yet this equates to only 0.37 percent of all China’s imports, according to Trading Economics. If Iran were to cease to exist overnight, China could make up for the loss by increasing imports from Iraq, the United Arab Emirates or other oil producers.

Russia is a similar story. Tehran has expressed interest in purchasing Russian jets and surface-to-air missiles. Even if Iran did buy Russian arms exclusively, it would be economically insignificant to Russia; Russia’s state-sponsored arms industries could get by without Iranian cash.

Why, then, is the Russia-China-Iran axis continuing to strengthen?

Russia and China can use Iran in the same way they use North Korea. Aiding the despotic regime bring it under Russian and Chinese influence, and they can then use the nation to oppose the U.S.

By helping Iran develop its navy, counteract U.S. sanctions, and sell its oil, China and Russia are helping make Iran the North Korea of the Middle East. This trend will only accelerate when Iran gets nuclear weapons.

Of course, there are some differences between Iran and North Korea. North Korea’s threats have been aimed mainly at the United States. However, a nuclear-armed Iran funneling advanced Russian weapons to radical Islamic terrorists is a threat to Europe, the Mediterranean and vital shipping routes that supply the Continent with oil.

The Trumpet has been watching Iranian military developments closely since the 1990s. In our free booklet The King of the South, Trumpet editor in chief Gerald Flurry states: “The blatantly bold and aggressive foreign policy of Iran must lead to war. It will either conquer or be conquered.”

Modern Russian weapons or assurances of support from Russia and China could greatly increase Iran’s boldness.

Bible prophecy indicates Iran will become much more aggressive than it currently is and Europe will be forced to unite to conquer Iran. The European response will shock the world.

Mr. Flurry explains: “Bible prophecy makes it clear that Iran will be conquered—but not at the hand of America and Britain. … A new superpower is rising in the European Union. The Bible labels this conglomerate the king of the north.”

We identify Iran and its radical terrorist proxies as this “king of the south” that will clash with Europe. The prophecy, found in Daniel 11:40, reads: “And at the time of the end shall the king of the south push at him: and the king of the north shall come against him like a whirlwind, with chariots, and with horsemen, and with many ships; and he shall enter into the countries, and shall overflow and pass over.”

Watch for Iran’s aggressiveness to increase, culminating in a major push against Europe. This confrontation will lead to nuclear World War iii. To understand in detail why we believe Iran and Europe fulfill these prophetic roles, and what lies beyond this approaching confrontation, read our free booklet The King of the South, by Gerald Flurry.