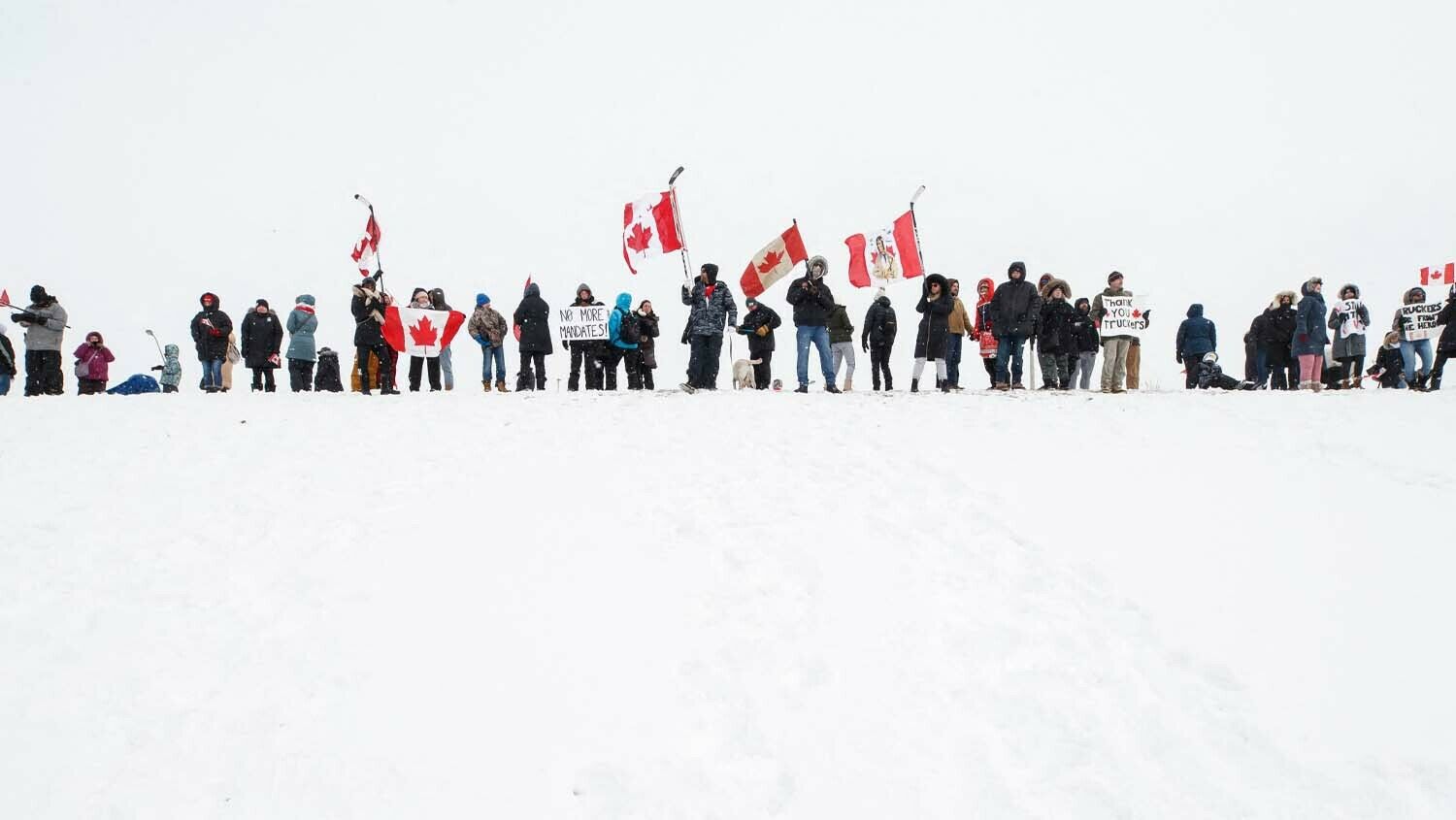 Supporters of a convoy of truckers driving from British Columbia to Ottawa in protest of a Covid-19 vaccine mandate for cross-border truckers gather near a highway overpass outside of Toronto, Ontario, Canada, January, 27.
COLE BURSTON/AFP via Getty Images

The tide is turning against the radical left across the continent.

They have had enough. Thousands of truckers in Canada formed the longest motorcade in human history this past week. Starting in British Columbia and traveling 2,000 miles in seven days, as many as 11,000 rigs joined the motorcade, extending for as long as 93 miles, on the way to the nation’s capital, Ottawa. The first of hundreds of trucks in the “Freedom Convoy” entered the city on Saturday. Thousands of truckers and their supporters are there right now.

Importantly, thousands of Canadians in small towns and cities along the way came out to the roadside and lined overpasses holding signs, waving flags, setting off fireworks, and cheering the truckers. One online fundraising campaign has received more than 120,000 donations worth $7.6 million, and counting, to help pay for fuel and other expenses. That’s more in about a week than Canada’s five largest political parties raised in the entire fourth quarter of 2021, combined.

What has brought all of this about? Prime Minister Justin Trudeau and his government’s vaccine mandates, the latest oppression of Canada’s flourishing tyranny.

Trudeau himself went into hiding, literally, before the truckers arrived in the city and parked on Wellington Street and in the city’s core. He claimed to have contracted covid-19 (asymptomatic) and therefore needed to quarantine himself in an isolated, undisclosed location. He delivered some recorded remarks yesterday to associate the truckers with Nazism, racism, vandalism and hate.

According to a number of reports, the truckers in Ottawa at Parliament Hill and elsewhere are far better characterized as nonviolent, polite and happy. Videos show truckers and other protesters in large crowds waving Canadian flags, playing ice hockey, receiving coffee and other gifts from supportive Canadians, and chanting, “Freedom!” Many have promised not to leave until Trudeau’s draconian mandates are repealed. Trudeau says he is not “intimidated” by the protesters and refuses to meet with them or to reconsider his vaccine orders. He has identified the Freedom Convoy not as a massively popular protest against his policies with shows of support from masses of people literally across the country, but as a “small fringe minority” who hold “unacceptable views” and are not “following the science.” More than once, he has painted those opposed to forced vaccination as being “misogynist” and “racist,” even though they and their many supporters among everyday Canadians come from different races, languages, countries, heritages, cultures and religions and are united over one thing: their rights.

Trudeau also painted the protest as a result of his political opponents stoking fear about supply chain problems, even as thousands of these same truckers are already back to work keeping the nation’s damaged economy running. Liberals in the media have gone so far as to say it’s Russia.

Several Canadian members of Parliament have cheered the convoy and condemned the Trudeau regime’s vaccination mandates. Conservative Party leader Erin O’Toole is trying the balancing act of condemning the mandates, yet declining to publicly support the Freedom Convoy, yet agreeing to meet with its organizers.

“You’ve probably noticed some empty shelves at your grocery store,” O’Toole said in an online video posted January 27. “That’s because Justin Trudeau put in place a mandate that all truckers entering this country, either Canadian or American, have to be fully vaccinated.” He went on to say that the mandate will put tens of thousands of Canadians out of work, increase scarcity and prices for produce and food, and leave produce rotting in the warehouses of Canada’s largest trading partner.

Trudeau characterized such statements as fear-mongering, and he has strong support in his government and among Canadian news corporations. But a lot of Canadians aren’t buying it.

When he first started lockdowns two years ago, Trudeau praised truckers for keeping the shelves stocked. But truckers who want to keep doing what they have been doing—which happens to be driving a rig full of goods to where they are needed, having little social interaction and even less risk of spreading infection, and not being forced to inject themselves with new experimental drugs that would not even be considered vaccines (at least in the United States) if the government didn’t keep changing the very definition of vaccines—are villains.

Despite the derision coming from Trudeau, the Freedom Convoy has fired up some patriotic zeal in the hearts of millions of people in Canada and beyond. The Trumpet’s Canada correspondent reports that he “has never seen a cause unite Canadians and inspire patriotic displays as this movement has done.”

The obvious truth demonstrated by the trucker convoy is that millions across Canada, as well as the U.S., are starting to resist the tyrannical orders coming out of Ottawa and Washington. (An American version of the convoy is currently being discussed.) People are traveling hundreds of miles, braving frigid temperatures, and risking significant income to show the political elites that they have stolen one right too many.

Fox News host Tucker Carlson interviewed Freedom Convoy spokesperson Benjamin Dichter, who said truckers are particularly worried about vaccine passports. What he said gets to the heart of the issue.

“Yesterday, it was my first time ever crossing the border in my truck with my digital passport,” he said. “I held my phone up to the border agent to give him the QR code, and do you know what he said to me? He said, ‘Oh, it’s OK; I don’t need it. Your phone has already popped up on my screen and is correlated with your passport.’ Think about that: Can you believe that? They know everybody who is coming up to the border before they are there, and are tracking them. Maybe it is outlandish, but what is to prevent the government from introducing that across Canada and not limiting it to just borders.”

covid-19 infection rates in Canada are similar to those in the U.S. Canadians are no more likely to catch the virus from an American trucker than from anyone else, and vice versa. And as Justin Trudeau’s case at this very moment illustrates perfectly, you can be triple-vaccinated and surrounded by the most stringent restrictions in the nation and yet catch covid.

If you follow the science, there is no reason to prevent unvaccinated truckers from crossing the border. So why is Trudeau forcing them to get injections?

The only logical explanation is illustrated by Dichter’s experience. Vaccine mandates are a way to transfer control of citizens’ lives from the citizens themselves to the government. They are a way to expand government tyranny, a major feature of socialism. They are a way to condition people’s minds to accept government tracking of your health, your location and more, like China. This goal is so important to radical socialists like Trudeau that they will plunge the national economy into crisis to achieve it.

In November, my father, Trumpet editor in chief Gerald Flurry, said the tide is beginning to turn against the radical left, and he was right. From coast to coast in the United States and Canada, along every interstate and national highway, everyday people in cities, towns and out in the countryside realize that their nation and their future and the future of their families is being consumed by supply chain disruptions, runaway inflation, vaccine mandates, illegal immigration, rising crime and radical government oppression. That’s why you’re seeing people finally stand up.

A prophecy in Amos 7 states that God will save the modern descendants of Israel from the abyss, one last time. These descendants include the Canadians, the Americans and the English-speaking nations. (Request your free copy of The United States and Britain in Prophecy, by Herbert W. Armstrong.) But why? Is He saving us just to “get back to the way things were,” as many of the truckers and others have expressed it?

Getting back to the way things were two years ago or 20 years ago is not the answer. As you look over the precipice, as you feel yourself getting pushed toward it, it’s time to realize that you have only one hope. That hope is not in patriotic truckers or in a political party or in Erin O’Toole or in Donald Trump. Your one and only hope depends entirely on repenting of sin (Amos 7:8). It depends on recognizing not only that our leaders are flawed, that our parties are flawed, and that our movements are flawed, but that, yes, you yourself are flawed.

“God has made Canada one of those nations which cannot be conquered and cannot be destroyed,” British politician Norman Angell said, “except by itself.” If you’re ready to face what you need to face, ready to realize the individual accountability each of us has toward the God who made America and Canada great in the first place, request your free copy of The United States and Britain in Prophecy, by Herbert W. Armstrong.