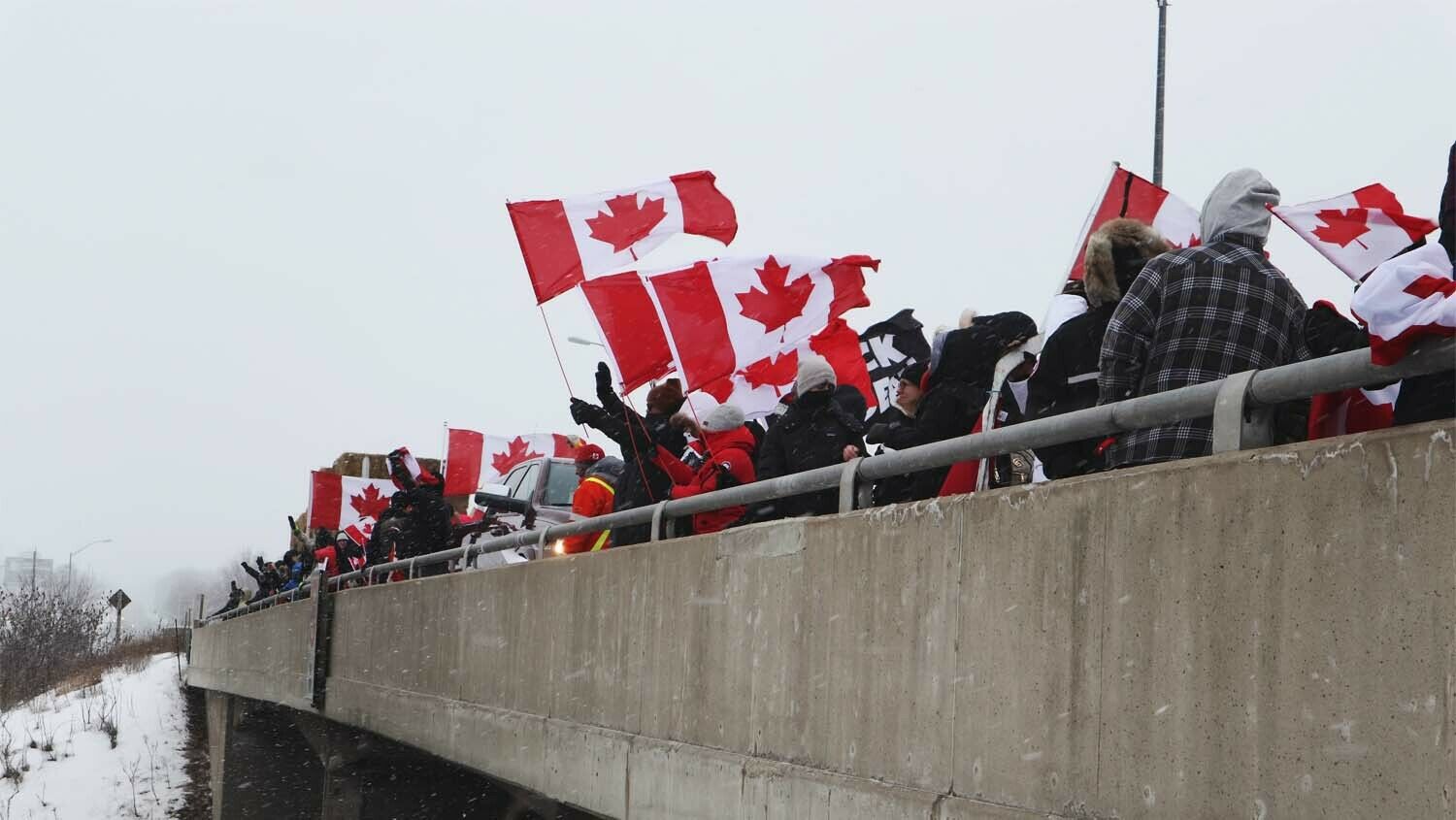 Around 50 people gathered on the Guelph Line 1 / 401 overpass to support the southern Freedom Convoy as they make their way to Ottawa, January 27.
Trumpet

Is the tide turning in Canada?

ontario, canada
Around 50 people gathered on the Guelph Line 1 overpass at Highway 401 on January 27 to support the southern Freedom Convoy as it makes its way to Ottawa. The young and old braved the negative temperatures and chilly winds to hold up Canadian flags, placards supporting the truckers, and to express support for the mandate of the convoy: freedom from government overreach. It was one of dozens of groups that gathered around the country.

There are at least seven different convoys from all over Canada that are going to converge on the national capital on Saturday, January 29. The western convoy started in Vancouver, British Columbia, and began making its cross-country journey on January 22. The southern convoy began rolling toward the capital on January 27. Overpasses and the sides of roads became filled with hundreds, and perhaps thousands, of people as the convoy moved along Highway 401. Similar scenes have been happening all over Canada. I have never seen a cause unite Canadians and inspire patriotic displays as this movement has. It really is unprecedented.

In response to the convoy, Transport Minister Omar Alghabra said the government will not be removing the vaccine mandate and that he was concerned about far-right voices entering into the debate. Prime Minister Justin Trudeau in a January 26 press conference called the convoy and supporters a “fringe minority” and said they had “unacceptable views.” This statement by Trudeau has seemed to unite the country against his administration. The sheer numbers of Canadians willing to stand for hours in below zero temperatures demonstrates this is clearly not a “fringe minority.”

The Freedom Convoy started as a movement to protest the January 14 vaccine mandate imposed on Canadian and American truckers by the government of Prime Minister Justin Trudeau. Any unvaccinated drivers must quarantine for 14 days; unvaccinated American drivers will be turned away at the border. What began with a small group of truckers from western Canada has become a grassroots movement on a scale that is difficult to quantify. Donald Trump Jr., Elon Musk and Tucker Carlson have voiced support for the convoy.

A GoFundMe page organized by Tamara Lich, a political party member of the Alberta Maverick Party, was created on January 14 with a goal of raising $700,000 to help pay for the cost of the convoy. At the time of writing, the GoFundMe has now raised over $6.1 million. The average donation amount has been $100, meaning ordinary people have been supporting the movement at a time when 60 percent of Canadians can’t afford to feed their families.

The western convoy has grown to be the largest convoy in human history, stretching over 48 miles. In some towns and cities it has taken two hours for the convoy to pass by on the Trans-Canada Highway. That is only one of seven convoys. Becoming larger than anyone ever imagined, the organizers are estimating that between 50,000 and 90,000 semi-trucks will be in Ottawa on January 29, with possibly 500,000 supporters to attend the rallies. The government has placed their estimate between 1,000-2,000 people.

The convoy is making it’s way to Ottawa to protest mandates and restrictions in the country.#FreedomConvoy2022 @BezirganMocha pic.twitter.com/LfDsmEi6A8

It has been astonishing to see the level of support being given by the Canadian people to the trucker convoy. Communities have come together to feed the convoy by making sandwiches, preparing hot food at rest stops, and even walking along the highway and handing out ready-made meals to the drivers. In Manitoba, the Hutterite communities intended on giving food to the convoy but were blockaded by the police. Undeterred, the Hutterites followed the convoy, from Winnipeg, Manitoba, to Kenora, Ontario, 129 miles.

In the prairie provinces, where temperatures were 34 degrees below zero Fahrenheit and the highway is in the middle of open stretches of farmland, people lined the streets and overpasses to show their support. In Winnipeg, the streets were lined for 12 miles with Canadians waving flags and holding signs. They also launched fireworks on the side of the road as the convoy rolled past.

Crowd lights up fireworks on the side of the highway in support for the #TruckersForFreedom as they pass by Moose Jaw, Saskatchewan.

When the different convoys reach Ottawa, the sheer amount of trailers will shut down the city and surrounding area. The Western Standard is reporting they are planning five days of rallies. If the government does not give an answer to their demands, they intend to continue. There is no centralized leader, but several groups cooperating together, each with slightly different aims. But the overall goal is to force the government to remove all government restrictions, including travel and vaccine mandates.

The mainstream Canadian media has had a blackout of coverage on the convoy, neither reporting on its size or scope of support. The major networks reported that the GoFundMe had been frozen, which was a half-truth at best. GoFundMe never froze the page, and people could continue to donate. A terrorism expert interviewed by CP24 claimed that anyone who donated to the convoy could become guilty of funding domestic terrorism.

This is the same pattern that preceded last year’s January 6 riot in Washington, D.C. The media crafted a narrative, even ahead of time, that a large protest could become violent, setting up protesters to be characterized as domestic terrorists. This, despite the fact that, as Trumpet executive editor Stephen Flurry has explained, the actual violence on January 6 was largely due to leftist infiltrators. We do not know what is going to happen when the truckers reach Ottawa, but a Canadian version of the January 6 insurrection hoax is within the realm of possibility.

The Royal Canadian Mounted Police (rcmp) is a federal police force. It works with the United States Federal Bureau of Investigation (fbi), within Canada. Both organizations have over 100 years of close partnership. The rcmp have also been caught “manufacturing terrorism” on multiple occasions. These include planting a bomb in an Alberta oil field, helping drug addicts build a bomb, and possibly aiding the largest mass shooting in Canadian history. These incidents are well-documented and reported by the legacy media.

Barrie Zwicker, an investigative journalist, wrote a brief to the House of Commons Standing Committee of Public Safety and National Security, in which he stated: “This brings into sharper focus the ever closer association of Canada’s intelligence agencies with the fbi, that has built manufactured ‘terror plots’ into a bizarre industry. Investigative reporter Trevor Aaronson, author of the 2013 book The Terror Factory: Inside the FBI’s Manufactured War on Terrorism 3, writes that as of 2011 the fbi was involved in more than 500 cases of ‘manufactured’ terror. The fbi, he wrote, targets the mentally ill, the homeless, sometimes diagnosed schizophrenics, people unable to distinguish reality from a dream world.” This is relevant because the rcmp is one of the federal agencies involved in policing the protest.

Another factor involved is that Canadian law allows for the prime minister to invoke wartime power if there is justifiable threat of an insurrection. By invoking the Emergencies Act (formerly the War Measures Act), the prime minister would have the authority to deploy the army, make arrests without warrants or trial, and charge individuals with treason with limited oversight from Parliament. The only prime minister to ever do this was Justin’s father, Pierre Trudeau, who gave himself these powers during the October Crisis in 1970 and declared a state of “apprehended insurrection.”

There have already been some cases of government interference in the convoy. In one instance the police blocked off a truck stop where supporters had prepared food, saying they had coordinated with the convoy, but that appears to not be the case. As the southern convoy made its way through Ontario, traffic cameras were shut off, hiding their movements and size of the convoy.

Police close off Truck rest stop where supporters had prepared hundreds of pounds of hot food.

Police claim they’re coordinating with convoy organizers, but that doesn’t seem to be the case.@TheLastRefuge2 #TruckersConvoy2022 pic.twitter.com/KH4eF3dcCj

The triple-vaccinated prime minister announced yesterday that he was exposed to covid and would have to self isolate for five days. This quarantine does not follow any government guidelines but does conveniently coincide with the Freedom Convoy’s arrival and rallies in Ottawa. In 2019, the United We Roll protest of truckers went to Ottawa and the Liberal government was concerned the truckers would overthrow the government and arrest Trudeau, according to Blacklock’s Reporter. Extraordinary security measures were taken, but the protest went peacefully and was only a fraction of the size of the Freedom Convoy.

Most Canadians have been compliant with the government policies. The Trudeau government has aggressively pursued implementing a Communist agenda. This is the first significant push against that agenda in a generation. Why this sudden groundswell of discontent?

Trumpet editor in chief Gerald Flurry wrote in “Why Your World Is Changing So Suddenly,” “Leaders in politics, business, education and media are ignoring the law, violating freedoms, and enforcing radical policies on unwilling people. They are turning coronavirus, the environment, race and other issues into weapons for forcing through their agenda.” This is fulfilling a prophecy in 2 Kings 14:26, that the end-time nations of Israel would face bitter affliction. These nations are America and the British Commonwealth, including Canada, which you can prove in our book The United States and Britain in Prophecy, by Herbert W. Armstrong.

While the power of the radical left is surging, the Bible reveals God will intervene. “But I believe the tide is turning. We are about to see a sizable amount of this corruption brought to justice,” wrote Mr. Flurry in a February 2022 Trumpet article. “God is at work. As 2 Kings 14:27 says, though Satan is working to destroy America and to ‘blot out the name of Israel,’ God is going to stop it—‘by the hand of Jeroboam,’ speaking of a modern-day type of King Jeroboam ii of ancient Israel. That man is Donald Trump.” This change will center on the United States but could also take place in the other nations of Israel. The Freedom Convoy could be the first wave in the turning of the tide in Canada.

The world scene is about to dramatically change, and you need to keep tuning into the Trumpet to know how Bible prophecy is being fulfilled. Please read our free booklet America Under Attack to know the truth about the radical left agenda.