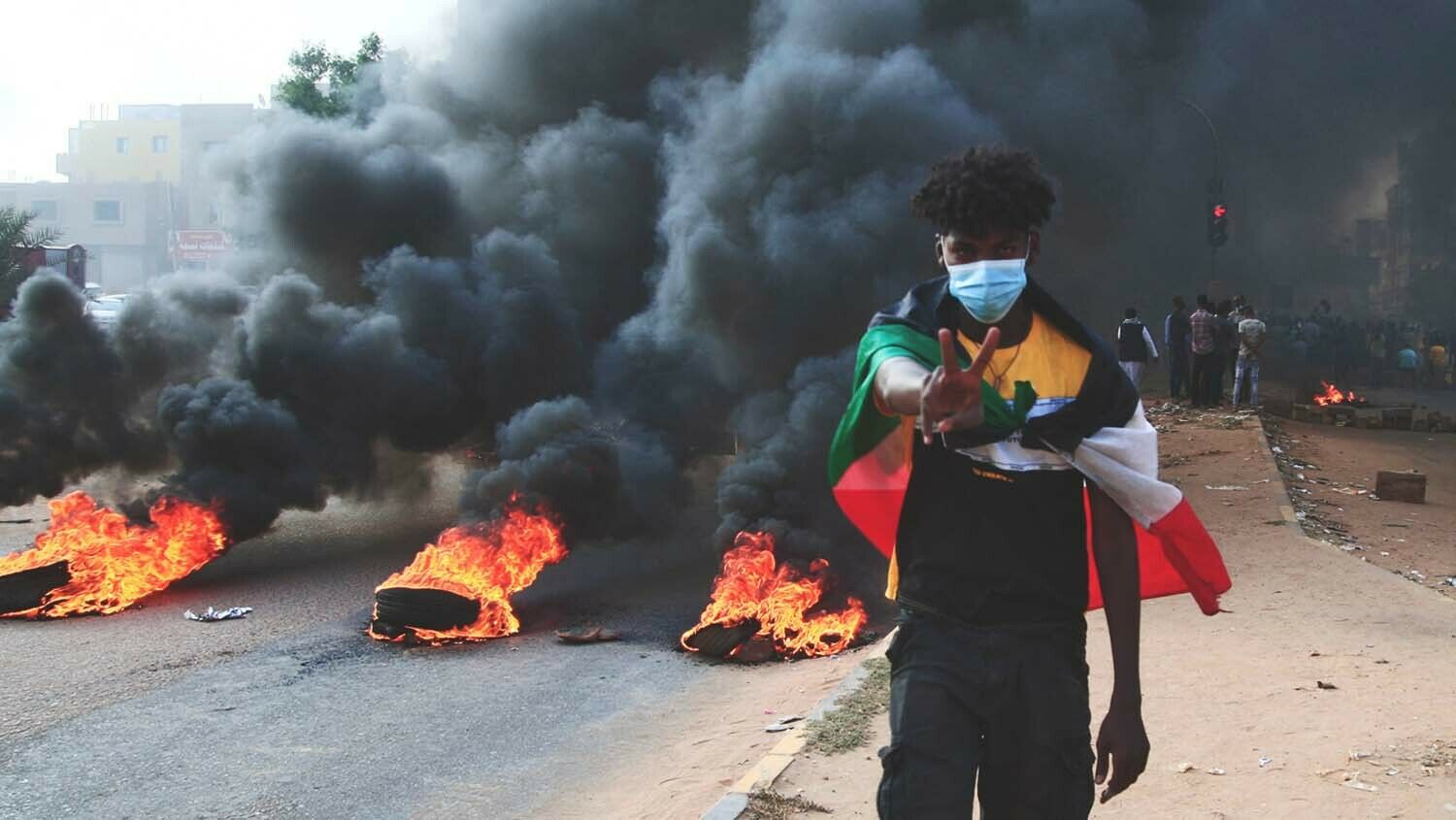 A Sudanese protester draped with the national flag flashes the victory sign next to burning tires during a demonstration in the capital, Khartoum, on Oct. 25, 2021.
AFP via Getty Images

Sudan suffered a coup in October. Since then, the Arab state has been reeling from constant unrest and instability. Mass protests started when the military removed Prime Minister Abdalla Hamdok in October. Hamdok was shortly reinstated, but many saw this as a “fig leaf” to legitimize their takeover.

Hamdok resigned on January 2. According to Al Jazeera, “Reports citing sources close to Hamdok say he was fed up with the decision of Abdel Fattah al-Burhan—the top military commander and leader of the coup—to restore the widely feared intelligence service, as well with his refusal to allow the prime minister to freely appoint members of his cabinet.”

Both Hamdok and Burhan gained power in 2019 after Sudan’s longtime dictator, Omar Bashir, was ousted. Hamdok, a former United Nations economist, was appointed prime minister to head the government until elections could take place later this year. His resignation takes Sudan into uncharted waters.

Burhan still controls the power behind the throne in Sudan. But his hold is tenuous. Many in Sudan oppose military rule. More than 70 people have been killed and over 2,000 wounded in the military’s crackdowns since October. But it’s not just the people causing problems for Burhan.

Sudanese analyst Jihad Mashamoun told Al Jazeera that the risk of other officers in the military revolting against Burhan was real. “Al-Burhan is always worried about junior officers orchestrating a coup,” he said. Meanwhile, on January 20, 55 Sudanese judges issued a public statement condemning the military leadership. The statement says the military has “violated agreements and covenants since the October 25 coup, as they have carried out the most heinous violations against defenseless protesters.”

Then there is Sudan’s precarious relationships with the outside world. Under Bashir, Sudan became one of the most isolated countries in the world. Bashir brought Sudan under strict Islamist rule. He supported al Qaeda and Hamas. He was a friend of Iran. He was even the first sitting head of state indicted by the International Criminal Court.

Burhan, Hamdok and others have tried to repair Sudan’s reputation. The new administration recognized the legitimacy of Israel and was subsequently removed from the United States list of state sponsors of terrorism.

Since the coup, Sudan’s return to the international community is regressing. In early January, the U.S., European Union and others threatened economic sanctions. On January 1, U.S. Secretary of State Antony Blinken issued a statement condemning the coup. “[We] are prepared to respond to those who seek to block the aspirations of the Sudanese people for a civilian-led, democratic government and who would stand in the way of accountability, justice and peace,” he stated.

Sudan was an enemy of the West for decades under Bashir. His military still held the puppet strings after his ouster. The chance of Sudan turning into a Western-oriented democracy is being nipped in the bud.

So where is Sudan turning to? Other pariah states in Africa.

Ethiopia is in a bloody civil war between the state and the Tigray People’s Liberation Army (tplf). The tplf represents the Tigray ethnic group. The Tigray make up a small percentage of Ethiopia’s population but have powerful armies. Ahmed has done everything he can to snuff out the tplf. This includes ethnic cleansing using (most likely) weapons banned by the Geneva Convention. There are even allegations of genocide.

This has alienated Ahmed from much of the international community, including the U.S., normally a strong partner of Ethiopia. Ahmed has looked to less savory characters to support his war, including Turkey, China and Iran.

Sudan borders Ethiopia to the north, including the Tigray region. During the course of the war, there were several border skirmishes between the two last year. So Sudan and Ethiopia aren’t on the best of terms. But they are two African neighbors shunned by most of the international community. Dagalo’s visit to Ethiopia suggests that Khartoum and Addis Ababa are turning to each other for support.

It is worth noting that Sudan, like Ethiopia, is also accused of ethnic cleansing. Sudan became notorious under Bashir for the Darfur conflict. Darfur is a region in western Sudan populated by sub-Saharan (black) Africans. Most Sudanese are Afro-Arab (descendants of mixed marriages between Arabs and black Africans). Sudan’s forces have been waging ethnic cleansing against the Darfuri for years now. The violence has continued even after Bashir’s ousting.

Sudan is also warming relations with Eritrea. Even more of a pariah state than either Sudan or Ethiopia, Eritrea has been ruled by ironfisted strongman Isaias Afwerki since 1991. Under Afwerki, Eritrea has gone to war with all of its neighbors and received a worse press freedom ranking from Reporters Without Borders than North Korea. But a report from Africa Intelligence suggests that Afwerki is actually mediating between Sudan and Ethiopia. Eritrean Foreign Minister Ousmane Saleh Mohammed has made repeated trips between Sudan and Eritrea to mend ties. In May 2021, Afwerki reportedly visited Khartoum.

It’s unclear how the events in Sudan will play out. But the associations with Ethiopia and Eritrea are intriguing.

The Trumpet bases its Africa analysis on a Bible prophecy in the book of Daniel: “And at the time of the end shall the king of the south push at him: and the king of the north shall come against him like a whirlwind, with chariots, and with horsemen, and with many ships; and he shall enter into the countries, and shall overflow and pass over. … He shall stretch forth his hand also upon the countries: and the land of Egypt shall not escape. But he shall have power over the treasures of gold and of silver, and over all the precious things of Egypt: and the Libyans and the Ethiopians shall be at his steps” (Daniel 11:40, 42-43).

The prophecy dates to “the time of the end,” far in the future from when the book was written. Trumpet editor in chief Gerald Flurry explains in his booklet The King of the South that a radical Islamist bloc, led by Iran, is “the king of the south.” The “king of the north” is a united European bloc that clashes with Iran. Verses 42-43 show who some of Iran’s allies will be: Egypt, Libya and Ethiopia. “Whoever heavily influences or controls Ethiopia will undoubtedly also control the small areas of Eritrea and Djibouti on the Red Sea coastline,” writes Mr. Flurry. “These areas only recently became independent of Ethiopia. Also, I believe the Bible view is that these small areas are included as a part of Ethiopia.” (Request a free copy of The King of the South for more information.)

Egypt, Libya, Ethiopia, Eritrea and Djibouti are all within the same general area. But there is one country in the region conspicuously not mentioned: Sudan.

Under Omar Bashir, Sudan was an Islamist state and a friend of Iran. His successors have jettisoned Islamist rule. But it’s Bashir’s military that controls the country. They may turn to their old friend to prop up their struggling country. And Sudan entangling itself with Ethiopia and Eritrea may suggest that it will share their fates.

On the other hand, much of the Sudanese people are fed up with military rule. Africa Intelligence reported on January 14 that American officials are working with the military’s opponents. Many Sudanese are looking to organizations like the United Nations to put an end to the crisis. If something were to happen to remove the military from power, Sudan could turn to the West. Europe would become a natural partner. Sudan could become an ally of Europe in its fight against radical Islam. We’ll have to wait and see.

To learn more, please request a free copy of The King of the South.