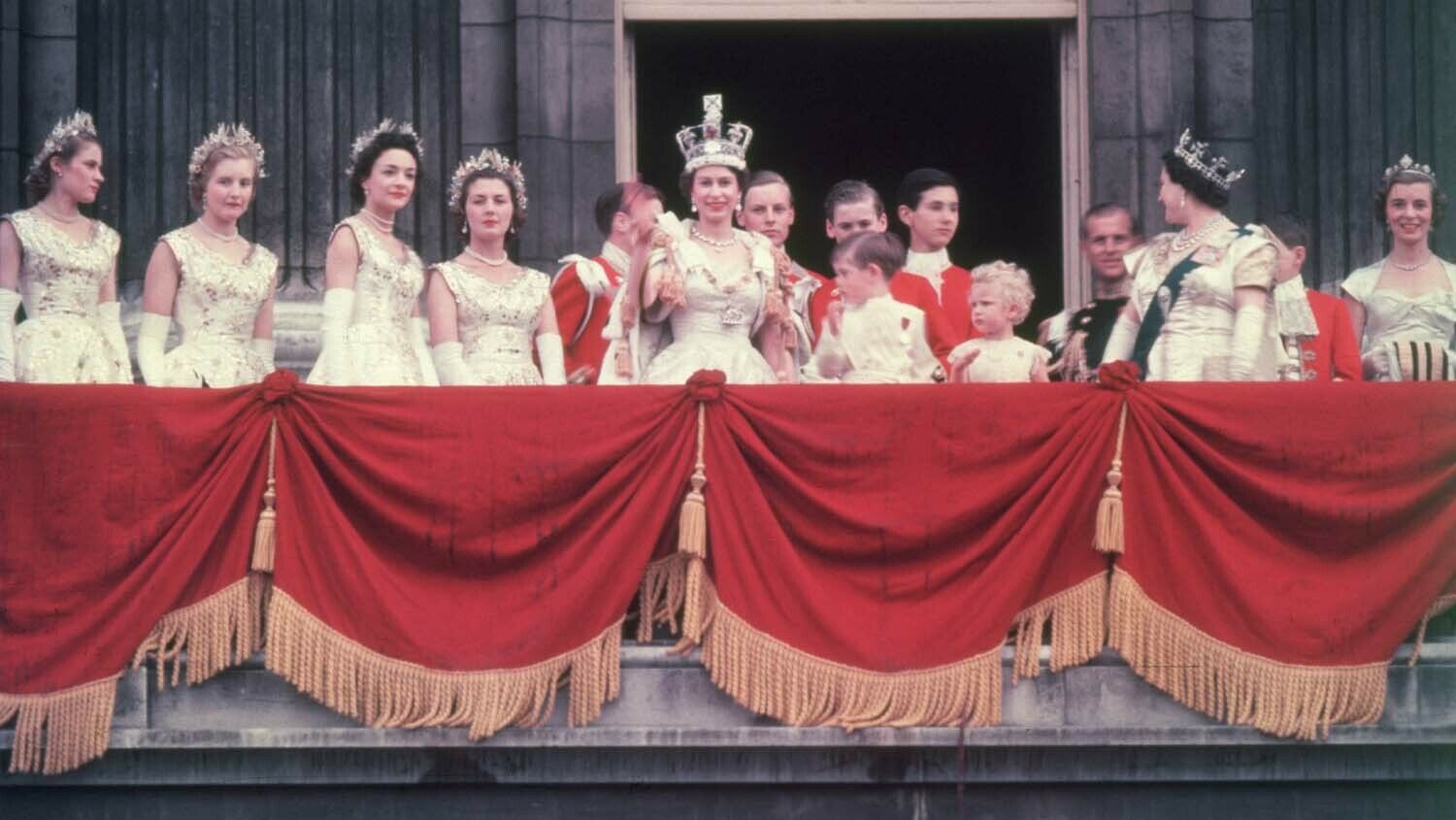 The newly crowned Queen Elizabeth ii waves to the crowd from the balcony at Buckingham Palace on June 2, 1953.
Hulton Archive/Getty Images

The Queen begins celebrating her Platinum Jubilee this month. But rich traditions around the celebration raise the question—how much longer can the monarchy last?

Queen Elizabeth ii will begin celebrating her Platinum Jubilee this month, marking 70 years on the British throne. Her Royal Highness is already the longest reigning monarch and the first to celebrate a Platinum Jubilee. Special events will take place throughout the year, culminating in a special long holiday in June.

The Queen has an impressive record of dignified public service. At age 21, then Princess Elizabeth declared her motto, “I serve.” On Feb. 6, 1952, King George vi died suddenly, and the young princess ascended to the throne at the age of 25.

She was coronated on June 3, 1953. Only eight years after the end of World War ii and in the midst of economic hardship, the coronation was a moment of national celebration. King George vi had provided quiet and courageous leadership during the war, and the young Queen represented an opportunity to showcase the glory of British traditions and power.

The coronation was watched by more than 20 million people on television and listened to by millions more on radio. It featured displays of military pomp and ancient ceremony, and it took place in Westminster Abbey, where all monarchs have been crowned since 1066.

The coronation ceremony was religious and deeply symbolic. The Queen took the oath of state, acknowledged her power under God, was endowed with the crown jewels and regal symbols, and anointed by the archbishop of Canterbury.

The most important part of the ceremony comes straight out of the pages of the Bible. “The coronation of Queen Elizabeth ii in 1953 was filled with evidence of this inspiring biblical history,” wrote Trumpet editor in chief Gerald Flurry in “Threatening the Crown That Binds Britain.” “The choir sang ‘Zadok the Priest,’ which describes the coronation of David’s son Solomon in 1 Kings 1:38-40. The ceremony was performed by priests who gave the Queen a Bible, which they called ‘the most valuable gift this world affords’ and ‘the lively oracles of God.’ They read to her God’s instructions to monarchs in Deuteronomy 17 and anointed her with holy oil, just as Moses anointed the first Levitical priest. She was crowned while seated over the stone of destiny, the very stone used by the patriarch Jacob during his vision of ‘the Lord God of Abraham’ (Genesis 28:10-15).”

(You can watch part 2 here or a color video of the ceremony here.)

Why is there a direct connection between biblical and British traditions? “Today most historians trace the English monarchy back about 1,200 years to King Egbert,” Mr. Flurry continued. “But in the 1800s, during the time of Queen Victoria, historians and possibly the Queen herself traced the British throne back nearly 3,000 years to King David of Israel! The British throne traces back to the throne of Israel, King David and God!” You can read this incredible true history for yourself in The United States and Britain in Prophecy, by Herbert W. Armstrong.

The British peoples are descendants of the biblical tribe of Ephraim, and the British monarchy descended from King David. The Bible is full of prophecies revolving around the throne of David, but there is one message in particular the world needs to know. This vital message is symbolized in the heir apparent’s plan for a woke coronation.

Coronations are not just a ceremonial display or legal tradition; they are demonstrations of a nation’s culture and character. Besides the Bible, many of the traditions seen in 1953 came from the legacy of the empire. “Empire building required not only economic and military prowess, but also intellectual and imaginative effort—for Britons to imagine and justify their national and imperial enterprise and to explain their national values to themselves and others,” writes Holger Hoock in Empires of the Imagination. “Ceremonial occasions were particularly potent moments to build this imaginative effort, and none more so than the rituals of a coronation.”

The coronation ceremony demonstrated national values, but was also linked to the thinking of the people. A coronation could enlighten and inspire people’s imaginations. A properly organized coronation could actually fill people with hope! Hoock examines the coronation of King George iii in 1761 and how it was designed to “convey a confident, patriotic message of British imperial triumph under a reinvigorated monarchy.”

Some of the ceremonial traditions used in 1953 were established in 1761. “[T]he backdrop for the most sacred act of the entire ceremony was Handel’s now famous setting, composed for George ii’s coronation in 1727, of the ancient coronation text from the First Book of Kings, ‘Zadok the Priest,’” writes Hoock. “This text had been sung at English coronations since Edgar’s in 973. … Thus was founded the tradition of performing Handel’s masterpiece of musical drama at every British coronation since.” The biblical traditions used in the coronation are packed with vision. Few have truly understood how the stone of destiny, the lyrics to “Zadok the Priest” and the anointing could connect people to God’s master plan for mankind. Far beyond stoking people’s imaginations for a physical empire, it can actually kindle our imaginations for God’s family empire ruling the universe.

When King George iii was crowned, Britain was at war with France and was at the threshold of receiving the birthright blessings of Abraham and becoming a globe-girdling empire. The coronation ceremony actually prepared people’s minds for that imminent destiny. “The crowning of George iii allowed the nation at war to imagine itself,” continues Hoock. “The all-enveloping sounds of drums, trumpets, chants, and cannon, and the sights of splendid robes and impressive processions, formed the backdrop to a confident, nationalistic message of British imperial triumph under a young new monarch. A coronation was an exceptional moment in the life of a nation.” The British people were not only inspired by the event, but inspired to undertake their imperial destiny. It sent a clear message to the world of who Britain was.

Queen Elizabeth ii is now 95 years old. During her 70-year reign, Britain has radically transformed. The empire began to collapse less than 10 years after her coronation. Marxist educators cast Britain’s legacy as racist and oppressive. God and the Bible have been sidelined in society, yet multiculturalism flourishes.

Eventually, there will be another coronation ceremony. The next in line to the throne is Prince Charles. What will that coronation look like?

We have a few insights for what to expect. Prince Charles has stated that he may consider changing one of the royal titles from “Defender of the Faith” to “Defender of Faith.” Max Hastings wrote in the Times of London: “[I]n the 21st century the service needs to be a multi-faith, multi-ethnic affair. … Prince Charles once said that, unlike Henry viii, he wished to be a defender of all the faiths, a fine ambition that should be reflected in the manner of his coronation. God cannot be left out but it would be soppy to pretend that the divinity of kings remains credible.” This sentiment reflects modern Britain, a multicultural nation that pays little mind to God’s history with their own monarchy.

The title “Defender of the Faith” comes from a time when there was an existential battle between the throne of David and the Catholic Church. The pope wanted to usurp the heritage and promises that God placed in the Davidic dynasty. The Anglican Church was created as an institutional protection against such attacks. Changing this title would also weaken the integrity of Britain’s independence from papal ambitions.

Historian Carolyn Harris has suggested that Prince Charles’s coronation could include readings from multiple religious groups, following the trend from the wedding of the duke and duchess of Sussex and the Diamond Jubilee. Both events focused less on tradition and more on ethnic diversity and celebrities. When the Queen ended the celebrations for her Diamond Jubilee, the stage was shared by pop celebrities Cheryl Cole, Will.I.am, Sir Elton John and many others.

Recent remarks by Prince Charles in Barbados at the ceremony removing the Queen as head of state indicate the coronation may reflect a more woke agenda: “‘From the darkest days of our past, and the appalling atrocity of slavery, which forever stains our history, the people of this island forged their path with extraordinary fortitude.” The entire focus of the speech was on the legacy of slavery. This message could be included in the coronation. Hastings continued: “The planners must create an event that possesses color, pageantry and dignity, but which also reflects the Britain of now, rather than as the heart of a bygone empire.”

What about the most biblically inspired parts, the most important parts, of the ceremony? Will the stone of Scone even be used? Will there be an anointing? Will “Zadok the Priest” be sung, or is it too offensive? Will people shout “God save the King!” or will it be joined by other affirmations? There is a strong chance these will be changed or absent.

The next coronation will not inspire, evoke confidence or kindle national imagination, but will reflect a humiliated, timid, woke people. Mr. Flurry wrote:

The British royals, busy trying to reinvent and “modernize” the monarchy, are wracked with problems and scandals in their own lives. Prince Charles may soon become king. He had a terrible, unfaithful marriage. He has not shown leadership. He has advocated for the false narrative of climate change. He has indicated that he will liberalize the monarchy even further, including changing one of his titles as king to include non-Anglican and non-Christian faiths. After the Church of England has already liberalized almost every moral teaching, this will leave Britain even more faithless, divided and vulnerable.

The coronation will not only reflect how Britain and the monarchy have changed, but also how God’s view of the British monarchy has changed. Prince Charles’s changes coincide with a massive change that the Bible says has taken place in the British throne. The British monarchy has failed to keep the biblical vision of David’s throne alive. But that vision has not perished. It is burning brighter now than ever before because of a miraculous and inspiring change made to the throne of David. To understand this all-important change, please read our free book The New Throne of David.