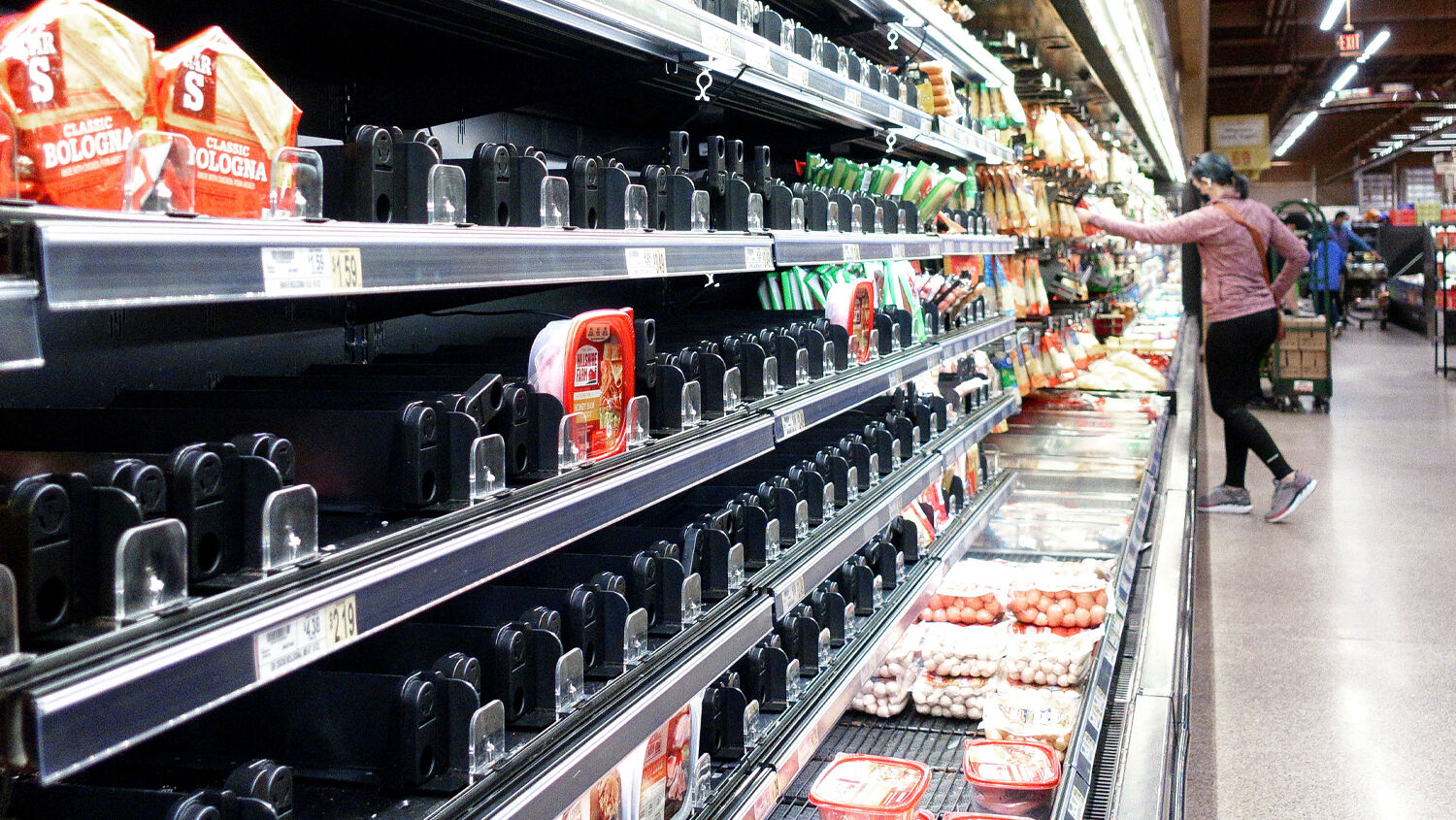 Shelves that held ham products are partially empty at a grocery in Fairfax Virginia, on January 13.
OLIVIER DOULIERY/AFP via Getty Images

Half of America’s population has never experienced inflation this high. Yesterday, the Bureau of Labor Statistics reported that the Consumer Price Index rose 7 percent in the 12-month period ending December 31, a level not seen since June 1982. The biggest contributors were gasoline (up 56 percent), car rentals (up 36 percent), hotels (up 28 percent), beef (up 19 percent), furniture (up 14 percent) and jewelry (up 8 percent).

These statistics are bad news for the Biden administration; polls show that more than two thirds of American voters disapprove of how Joe Biden is tackling inflation. These statistics are also bad news for the dollar’s status as world reserve currency. The U.S. Dollar Currency Index, which tracks the dollar against six major currencies, fell to a two-month low after the federal government released its latest inflation data.

George Boubouras, an analyst at K2 Asset Management in Australia, is now looking for opportunities to move away from the U.S. dollar by buying everything from Chilean pesos to sovereign bonds in Southeast Asia.

“The dollar’s peak is definitely behind us,” Boubouras told the Business Standard. “Currency traders are factoring in the Fed’s hikes and economic recovery well and truly now. There’s plenty of opportunities across sovereign bonds, credit and stocks from emerging markets to Europe with convictions the dollar could weaken further.”

In fact, a chorus of investors is betting the world’s reserve currency has reached its peak and is selling their dollars for gold and emerging-market stocks. Many analysts expect the Federal Reserve to raise interest rates in March to tamp down inflation by encouraging savers to pull their dollars out of circulation. This move would reassure Treasury Bond holders that the dollar is still an investment that will yield a profit not immediately eaten up by rising inflation. Yet America’s $30 trillion national debt complicates things.

Under normal circumstances, a Federal Reserve interest rate hike to tamp down inflation is long overdue. But America spent $562 billion in interest on its national debt during fiscal year 2021—up $40 billion from the previous fiscal year. So even the slightest rate hike will end up costing the government billions of dollars.

Financial historian Niall Ferguson has warned that nations and empires usually fall when the cost of servicing their debts exceeds the cost of defending their borders. The U.S. is dangerously close to this tipping point. Last fiscal year, the federal government spent $526 billion on interest and $753 billion on defense; it would take only $227 billion in additional interest to bring America to Ferguson’s tipping point. That might sound like a lot to some people, but $227 billion is less than 0.8 percent of $30 trillion. All it would take is a meager 1 percent increase on America’s de facto interest rate to push the nation to the point where the cost of servicing its debts exceeded the cost of defending its strategic assets around the globe.

Worse yet, data from the U.S. Treasury Department’s Office of Debt Management shows that the government is only a few years away from the point where every new dollar it borrows will have to be paid as interest on the debt. Called a debt death spiral, this means the government will soon be borrowing money to pay the interest on the money it has already borrowed unless it drastically slashes government spending or starts printing money like crazy. The first option will lead to economic depression and the second to hyperinflation.

The late Herbert W. Armstrong taught that the peoples who settled the U.S. and Britain descended from ancient Israel. And an end-time Bible prophecy says that God will suddenly break the power of Israel because of its sins, including materialism. The people worship the work of their hands more than they worship God.

How will this collapse of U.S. military power come about? Mr. Armstrong predicted that a financial crisis would likely devastate the U.S. and prompt Europe to unite into a superpower even stronger than America. In 1984, he warned that a massive banking crisis in America “could suddenly result in triggering European nations to unite as a new world power larger than either the Soviet Union or the U.S.” (co-worker letter, July 22, 1984).

Such a crisis is closer than people think. Donald Trump’s return could restore stability to financial markets, but America has not saved the money necessary to weather its next financial storm. The next recession might force America to stop projecting power against China, Germany and Russia to avoid bankruptcy.