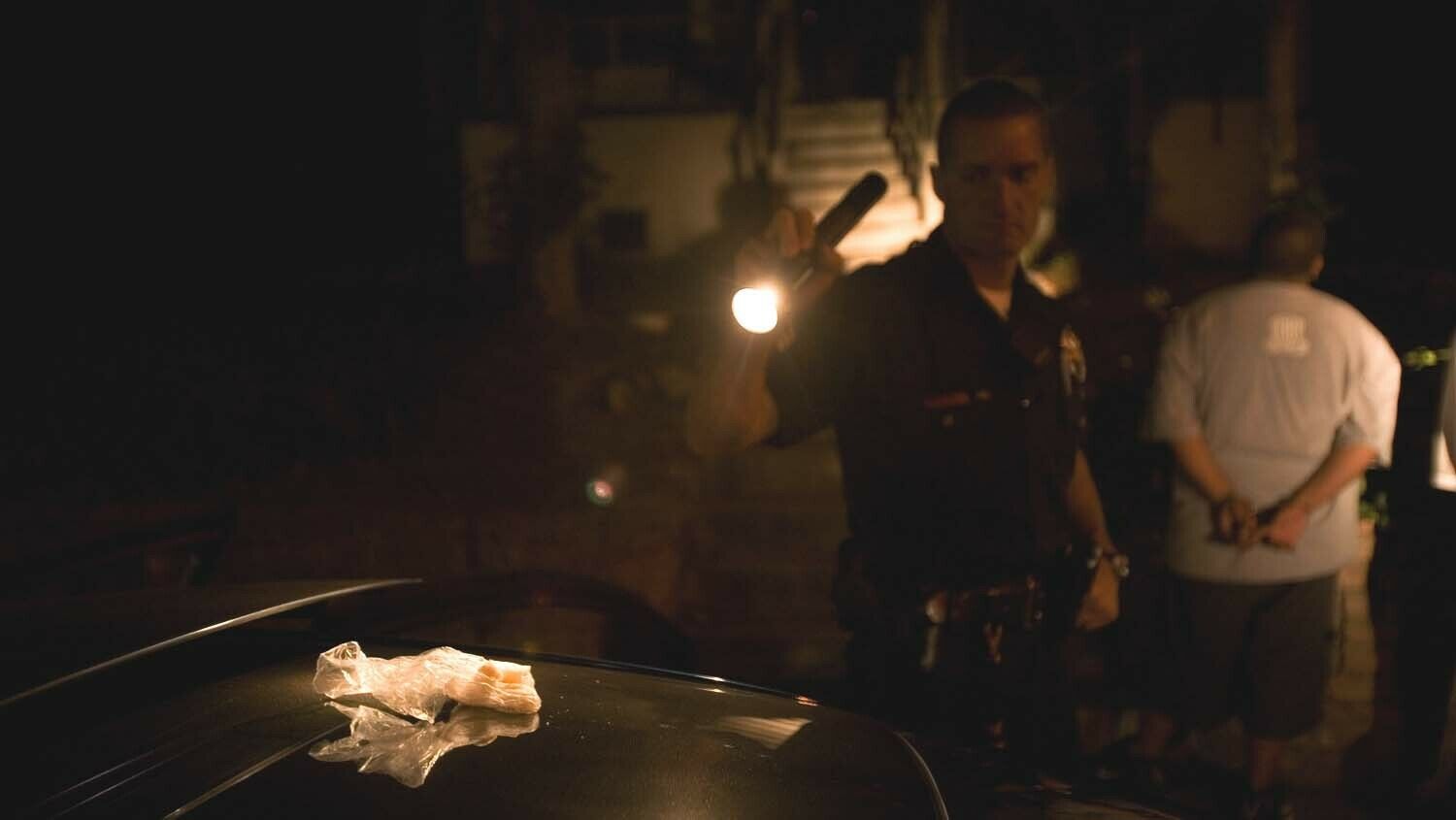 A bag with 3 ounces of pure crack cocaine lies on top of a vehicle pulled over by officers from the Los Angeles Police Department gang unit in California.
Robert Nickelserg/Getty Images

A destructive drug is enabling criminal organizations to muscle into the country.

People are going missing across Humboldt, Mendocino and Trinity counties as dangerous drug cartels move into northern California. Local sheriffs say they do not have enough deputies to investigate all the missing people claims but believe most of them are linked to the marijuana industry. Detectives found the headless bodies of a 17-year-old boy and his father last April under a pile of burned tires in Mendocino County. A marijuana farmer murdered both victims after a drug trafficking dispute. “It’s a punishment to the person who stepped out of line,” Mendocino County Sheriff Matt Kendall told the Courier Journal. “And a message to the next person: ‘Don’t step out of line.’”

In 2016, Californians legalized marijuana after years of listening to politicians say marijuana should be regulated, taxed and taken out of the hands of Latin American criminal syndicates. Yet California’s cartel problems have only gotten worse since legalization. Instead of giving up on drug trafficking, many cartels decided to cash in on America’s “green gold rush” by undercutting the price of legal products offered by farmers who follow the rules and pay their taxes. These cartels are abandoning decades-old marijuana farms in Mexico and moving to northern California.

Mike Sena, the executive director of Northern California’s High Intensity Drug Trafficking Area task forces, summarized the situation to the Courier Journal, saying: “Why try to bring that bulk marijuana into the United States when you can just grow it in the United States in remote locations like Mendocino County and then move it across the entire country?”

Like the Sinaloa and Cártel Jalisco Nueva Generación, major cartels are now ditching marijuana and heroin production to focus more on the traffic of synthetic chemicals from China. They are trafficking fentanyl, a synthetic opioid that is 50 times more potent than heroin, directly to American consumers. And they are trafficking toxic fertilizers, pesticides and rodenticides to black-market marijuana farms in the United States. The result is, marijuana is far more accessible and affordable than it was five years ago, and the Latin American criminal syndicates are still making record profits.

Many California farms are as bad as the old Mexican ones. “It’s the Wild West,” Sena continued. “We’ve got people in gunfights on a regular basis over marijuana. And the number of missing people is insane. During the growing season, people call the sheriffs’ offices up there looking for loved ones who may never be found. … Some of the marijuana being moved across the country is born on the back of slave labor. Often the people brought in to do labor are mistreated.”

Many drug cartels are selling people to California marijuana growers, in addition to fertilizers, pesticides and rodenticides. In one recent case, Mendocino County police rescued a 16-year-old Mexican girl who did not know where she was or how to speak English. Law enforcement believes she was brought in to have sex with the workers at a blackmarket marijuana farm in Covelo but was discovered by police deputies before she reached her destination.

Many who buy marijuana do not realize that the money they are spending could be financially supporting sex trafficking, but California policymakers recognize this fact. Yet they still support drug legalization and illegal immigration. California Sen. Scott Wiener told the Marijuana Moment that he wants to legalize psychedelic drugs, and California Gov. Gavin Newsom has promised “sanctuary to all who seek it.” The Emerald Triangle may soon be just as violent as the worst drug-producing regions of Sinaloa.

“This ain’t Mexico City, but it’s happening here,” said Joel Merrifield, a councilman for the Round Valley Indian Tribes. “It is alarming our elders, 80 years old and up, who don’t feel safe here.”

This situation is a textbook example of the natural consequences of breaking God’s law. Many people view drug addiction as a moral crisis, but it is also an undeniable national security crisis. If the American people had not abandoned biblical family values, an entire generation would not have been driven into hopelessness and hedonism. They would not have turned to drugs as a form of escapism. The alliance we see today between Chinese chemists, Mexican crime syndicates and American marijuana farmers would have never formed. But the American people have abandoned biblical family values, so now the worst drug cartels in Mexico are moving north into California and other states.

“Strong marriages build strong children,” Trumpet editor in chief Gerald Flurry writes in No Freedom Without Law. “We need strong children who are not vulnerable to drugs. Why do children want to take drugs and destroy their minds? The mind is the only thing that really sets us apart from animals. What is lacking in their lives that would make them want to do that to themselves? Why even take a chance on something so destructive? Because their wills are so weakened, they must have something to fill the void their parents have left—in most cases. Of course, drugs don’t truly fill that void at all—they only bring people into slavery of the worst possible kind. Drug addiction destroys the will!”

America could mitigate some of the threats it is facing by increasing border security and domestic law enforcement, but ultimately drug addiction and crime are not problems the White House can permanently solve. They are problems that must be solved in the 128 million households across America. For information on Bible-based solutions to drug-induced crime, please read “You Can Conquer Addiction!” and “The Evidence Shows Family Is Under Attack.”