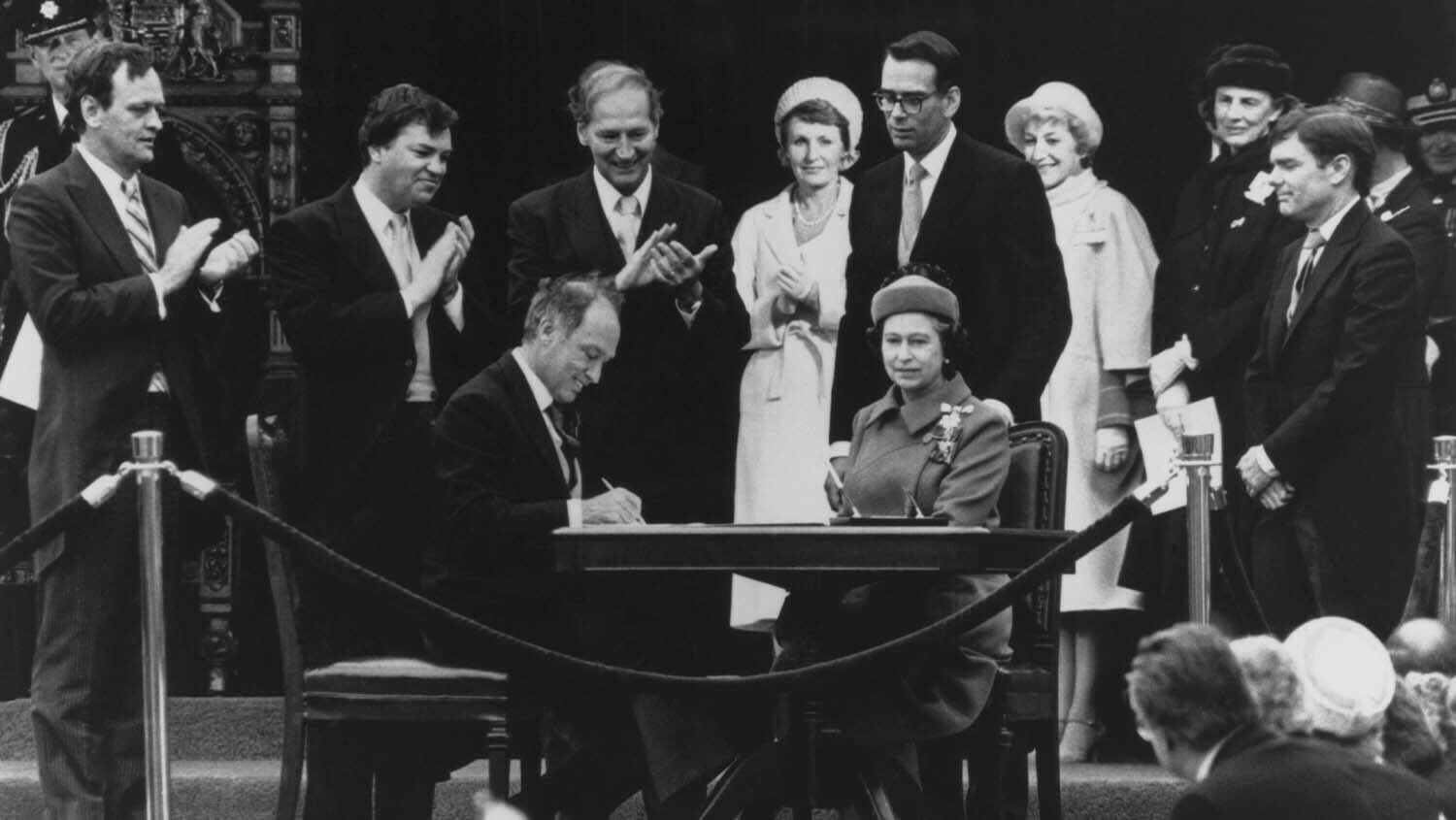 The most successful and dangerous revolution in Canadian history

On April 17, 1982, Queen Elizabeth ii sat across from then Canadian Prime Minister Pierre Trudeau in Ottawa and placed her signature on the Canadian Constitution. This was a transformative moment for Canada. It altered the function of government, the legal landscape, and the lives of every Canadian. At the heart of this change was the Charter of Rights and Freedoms. The charter was meant to protect the rights of all Canadians regardless of race, religion or creed. It was also meant to be a unifying force in a country with deep regional divisions.

When the Queen signed those documents 40 years ago, it completed Pierre Trudeau’s coup d’état: a 20th century French revolution inside Canada. The charter guillotined Canadian liberty.

Canada was ruled by Imperial Acts of Parliament until 1867, when, under the British North America Act, Canada was granted responsible government. This formed the Dominion of Canada, which unified the former colonies into a confederation under a federal system. Canadians could now vote their own representatives to a Canadian government, instead of being ruled over directly by the British Parliament.

The Fathers of Confederation, led by Sir John A. Macdonald, created the new Canadian constitution in less than two weeks. These delegates chose to implement the Westminster system of government, which is the British-style Parliament, with no written constitution or separation of powers: the legislative and executive branches are combined in the ruling cabinet, and Parliament can make and unmake any laws as it pleases.

The British monarch was still the head of state, and there was no supreme court. (The British Privy Council would function as the highest court of appeal in Canada until 1949.) There were provisions set forth outlining federal and provincial jurisdictions, but the balance of power always favored the federal government. However, the foundation of the Canadian government was the British traditions of freedom and common law. The only exception was Quebec, which still used the Napoleonic Code as the civil law.

Following Canada’s contribution to victory in World War i, Canadian Prime Minister Robert Borden pushed the British government to give Canada, and the other dominions, more influence on foreigners and world affairs. This pressure eventually led to the Statute of Westminster of 1931 by the British Parliament, which gave the dominions legislative independence. This was a quiet “Independence Day” for Canada. Now for the first time Canada had complete say over all domestic and foreign affairs. The Canadian government could not decide upon a method to change the constitution in the future, and so that power was retained by the British Parliament until a method could be created.

“This hopeful regime lasted a mere 115 years until 1982, when Prime Minister Pierre Trudeau muscled into existence a French-style Charter of Rights and Freedoms,” William Gairdner wrote at the Epoch Times. “Why? Because he despised and publicly mocked the English concept of government by a Parliament … absent any higher guiding principles.” The agenda and intent behind the charter has not been realized by the Canadian people.

Pierre Trudeau grew up in Quebec and was a Jesuit-educated intellectual. He emerged into the national spotlight during the fervor of Quebec separatism, which he opposed. Trudeau published the Cite Libre, a pamphlet that carried radical and contrarian views. It was during these formative years in Quebec that Trudeau established the desire to reform the Canadian constitution. His own writings at the time reveal the agenda behind that plan.

Gairdner wrote, “In his first book, Federalism and the French-Canadians (1968), Trudeau displayed a Machiavellian awareness that although our founding bna Act of 1867 was designed precisely to block heavy-handed rule from the top, what he pejoratively called our ‘checkerboard’ federal system might serve as ‘a valuable tool which permits dynamic parties to plant socialist governments in certain provinces, from which the seeds of radicalism can slowly spread.’ But who said Canada wanted socialist government? Who said Canada wanted to be radical?” Trudeau had keen insight into how weaknesses in the Canadian system could be exploited for radical change. A new poll by the Angus Reid Institute shows that this spread of radicalism has been very successful: Most young Canadians think society needs to “start over” and “restructure” in order to improve.

According to Gairdner, “Trudeau persuaded himself that ‘there is a greater need than ever for an enlightened socialist approach ….’ But what kind of enlightened socialism was he thinking of? In January of 1969, in response to a question from British students, ‘What kind of country would you like to make Canada?’ he replied: ‘Labour Party socialist, or Cuban socialism, or Chinese socialism-socialism each according to his means.’” These statements are on top of the infamously long history of Trudeau admiring Communist dictators. Trudeau’s own words should leave no doubt about his agenda: a synergy of Gallic and Communist thinking.

Trudeau’s self-proclaimed motto was “La raison avant la passion” (“Reason over passion”). This way of thinking was at the heart of the French Revolution. When human reasoning is elevated to the ultimate authority, it becomes twisted by human nature, which the Bible explains is desperately wicked (Jeremiah 17:9). Gairdner pointed out this flaw, writing: “[P]hilosopher David Hume … shook all confidence in mere human reason by arguing persuasively that ‘reason is the slave of the passions.’” It’s a tool that can be turned to any purpose and therefore gives a false confidence.” The British system sought to limit the devastating effects of human nature. Any system of government that elevates human reasoning over law, over God, is destined for failure. This is the fundamental flaw in the charter.

There are two ways the charter deliberately undermines the freedom it is meant to uphold. First, it gave unelected judges the power to create law. Gairdner explained that “because abstract terms such as ‘equality,’ ‘freedom,’ ‘rights,’ and so on are never self-interpreting, [Trudeau] set in motion a long and continuing stream of judge-made personal interpretations of those terms ….” This “charter law” has been made by Supreme Court justices who are not held accountable by the people. The Supreme Court has a long history of being left-wing activists.

Second, two clauses in the charter allow the federal and provincial governments to create laws that override rights and freedoms. “Charter rights are not meant to be absolute,” LawNow explains. “In Section 33, a Canadian invention called the ‘notwithstanding clause’ allows the federal and provincial governments to ‘override’ charter-protected fundamental freedoms, legal rights or equality rights if they disagree with them. … Section 1, another section of the charter which can be used to limit protected rights, allows the government to argue that certain laws need to exist, even if they do violate charter rights.” The very first section of the charter allows the government to legally infringe on freedoms.

These two flaws were exploited in the 1986 R v. Oakes case. This created the “Oakes test,” which outlines three questions a federal law must pass in order to invoke Section 1 of the charter. It has been used over 1,700 times since and has enabled the advancement of radical left culture in Canada.

The Charter of the General Will

Trudeau’s vision for the charter centered around the ideology of the man who inspired the France’s Reign of Terror. According to Graidner, Trudeau “embraced … the writings of the main French artist of totalitarian socialism Jean-Jacques Rousseau, the inspiration of Marat, Robespierre, and Danton-murdering revolutionists all-who justified all their actions according to Rousseau’s conception of ‘the general will’ ….” In 1990, Trudeau urged Canadians to create a general will, which is “the theoretical root of all totalitarianism.”

Gairdner wrote that the general will is “a wholly abstract, totalizing concept created from the belief that for any problem concerning all the people, there must be rationally speaking … one best solution, one general will for the common good. Therefore, the general will is always correct and for the good of all ….” That perfectly describes Canadian society, especially since the covid-19 pandemic began. Any criticism against vaccine mandates or government health measures is censored and labeled misinformation, because it goes against the general will.

Canadian Prime Minister Justin Trudeau is finishing what his father started: fundamentally transforming Canada into a Communist state through the rule of will. There are several authoritarian laws facing charter challenges in the Canadian court today: air travel ban on unvaccinated, mandatory vaccination, and the Quebec health tax on the unvaccinated. These laws are possible due to sections 1 and 33. If history is a guide, don’t count on a court overturning them.

The Bible warns that we live in an age of will worship. Trumpet editor in chief Gerald Flurry wrote in the article “A Dangerous New Age of ‘Worshiping the Will’”:

The radical left is casting aside the foundational law of the land, telling us that it is just getting in the way. We don’t need that old law, they insist. We know what justice is. You can trust us!

Such reasoning paves the way for tyrants! Tyrants hate facts and truths that limit their power. So they ignore reality in favor of their own “magic interpretation” of the world. Every tyrant is a tool that the devil can use to cast God’s truth to the ground (Daniel 8:12).

We must recognize the evil spiritual force behind this push to undermine the law!

In Canada, the supreme law of the land, the Charter of Rights and Freedoms, actually enables worshiping the will. The general will of the Justin Trudeau government is part of a broader attack against the Canadian people. There is an evil spiritual force behind this agenda.

The Achilles’ heel of Canada has always been the compromise between the English and French peoples. The Bible warns that such compromises will ruin a nation. Please read the February 2022 Trumpet magazine for an in-depth explanation. You need to know more about the spiritual dimension of this attack on the rule of law. God has a solution to this evil corruption. Please read “A Dangerous New Age of ‘Worshiping the Will’” and the February 2022 Trumpet magazine to learn God’s solution of hope.