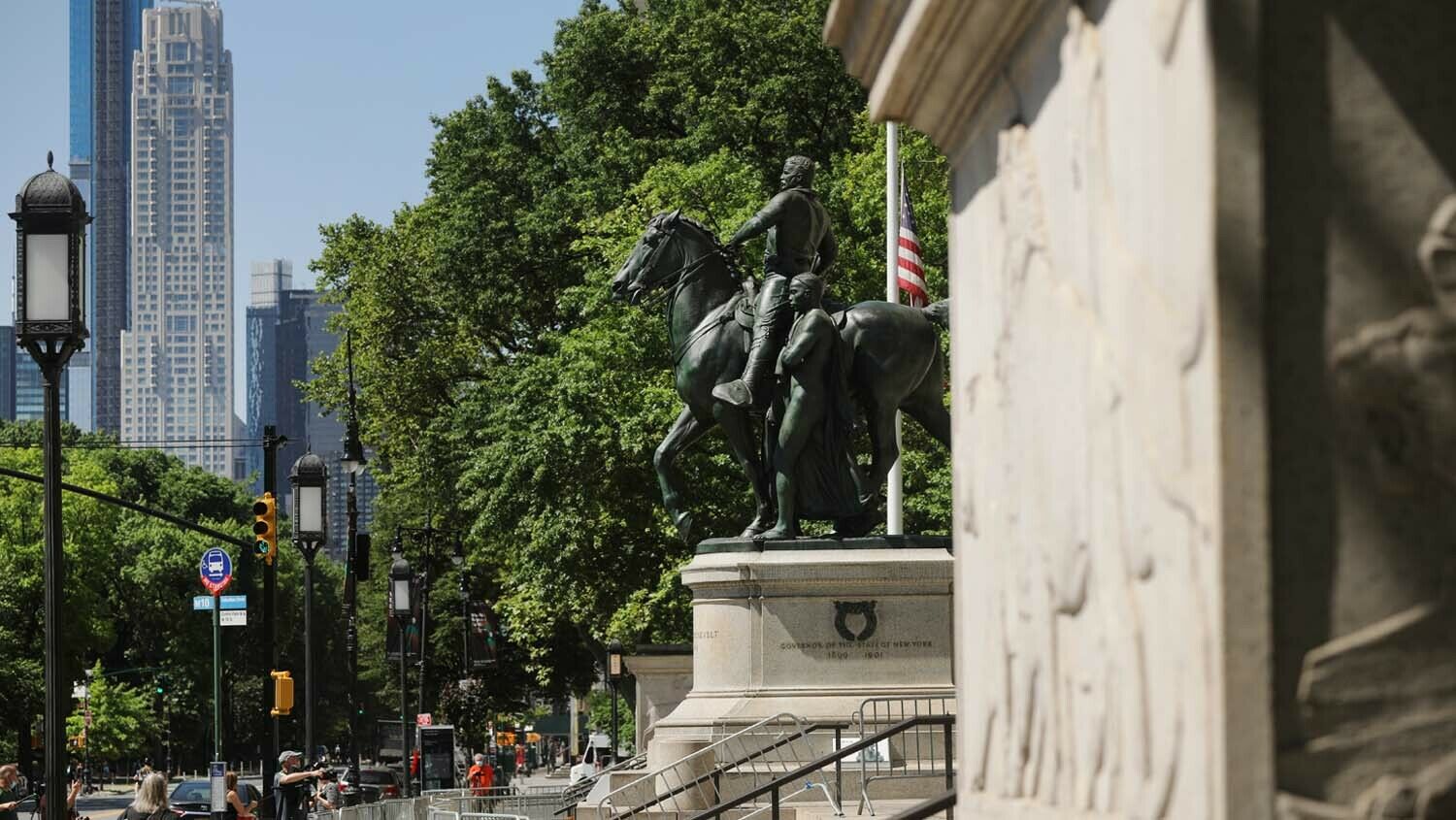 The statue of former President Theodore Roosevelt stands in front of the Museum of Natural History.
Spencer Platt/Getty Images

If you were to visit the Museum of Natural History in New York City right now, assuming you were able to make it past the vaccine mandates and restrictions, you would see a massive plastic block gracing the front of the building. Underneath the plywood boards and plastic sheeting is the statue of Theodore Roosevelt, the 26th president of the United States, which has been in front of the Manhattan Museum for more than 80 years.

The statue is being moved to the Theodore Roosevelt Presidential Library in North Dakota. Following the death of George Floyd in 2020, the nation began attacking historical figures deemed racist or colonial. Former Mayor Bill de Blasio said the Roosevelt statue “explicitly depicts black and indigenous people as subjugated and racially inferior.” Museum President Ellen Futter said, “Over the last few weeks our museum community has been profoundly moved by the ever widening movement for racial justice that has emerged after the killing of George Floyd.”

“What does Teddy Roosevelt, the 26th president of the United States, have to do with George Floyd, the career criminal with serious cardiac issues and a fondness for fentanyl and methamphetamine who died in police custody at the end of May?” asked Roger Kimball at the Spectator. “If you said ‘Nothing,’ congratulations! … The total lack of connection didn’t matter, though. When the mob decides to move, it consults not reason but (apologies to Pascal) raisons du coeur,” or reason of the heart. These decisions are being made by raw emotional will, divorced from the facts.

John Russell Pope, the architect of the museum, and James Earle Fraser, the sculptor, found creative inspiration for the statue from classical European artwork. The equestrian statue drew heavily from a statue of Bartolomeo Colleoni by Andrea del Verrocchio.

Equestrian statue of Bartolomeo Colleoni, Captain-General of the Republic of Venice - Verrocchio, 1481-95 pic.twitter.com/2N3te33t0p

“In the center of the terrace … will arise a polished granite pedestal bearing an equestrian statue of Roosevelt with two accompanying figures on foot, one representing the American Indian and the other the primitive African,” Pope wrote in the 1928 Memorial Commission. “This heroic group … will symbolize the fearless leadership, the explorer, benefactor and educator.

Fraser remarked in 1940: “The two figures at [Roosevelt’s] side are guides symbolizing the continents of Africa and America and, if you choose, may stand for Roosevelt’s friendliness to all races.”

The design was intended to symbolize unity, boldness and Roosevelt’s legacy as an American hero. The statue’s design has many details that should remind the observer of why Theodore Roosevelt should be remembered, not canceled. The design is not a statement of racial supremacy, but hearkens back to a time that defined Roosevelt’s life: San Juan Hill.

When the Spanish-American War began in 1898, Roosevelt was serving as assistant secretary of the Navy. He resigned that post and accepted an appointment as a lieutenant colonel of the 1st U.S. Volunteer Cavalry Regiment. “Despite [limited military experience], he plunged into the task of recruiting a force consisting mostly of cowboys from the country near his ranches, plus some former ‘Buffalo soldiers’ (African American cavalrymen from segregated U.S. Army units), Native Americans, and somewhat incongruously, a handful of kids from the Ivy League,” Alan Axelrod writes in his book Theodore Roosevelt, CEO. Roosevelt sought out African and Native Americans to be brothers in arms with him. The statue honors the memory of those men.

This unit became known as the Rough Riders. Although trained as a cavalry regiment, incompetence in logistics by the U.S. War Department left the men without horses for the duration of the war. However, Roosevelt took the initiative and attacked the San Juan Heights in Cuba in an attempt to decisively end the war. Roosevelt led the Rough Riders in charges up Kettle Hill and San Juan Hill. Roosevelt had to use a borrowed horse in the battle. He recalled the experience in his book The Rough Riders:

A curious incident happened as I was getting the men started forward. … As I rode down the line, calling to the troopers to go forward; and rasping brief directions to the captains and lieutenants, I came upon a man lying behind a little bush, and I ordered him to jump up. I do not think he understood that we were making a forward move, and he looked up at me for a moment with hesitation, and I again bade him rise, jeering him and saying: “Are you afraid to stand up when I am on horseback?”

The courage and spirit of Roosevelt at San Juan Hill is captured in the statue at the Natural History Museum. It also encapsulates his mantra, the strenuous life. In nearly all endeavors in his career, Roosevelt faced hardship, personal tragedy, and matters of state from a figurative horseback, always challenging the leaders around him who lacked the same courage, daring and strength of character.

How can Roosevelt be a symbol of racism and colonialism when he led a group of racial minorities to fight against colonialism in Cuba?

Removing the statue is also an affront to the people of New York City. The Roosevelt family was instrumental in creating the Natural Museum of History. Around 5 million people visit the institution each year and it has some of the most impressive collections in the United States. This museum is part of Roosevelt’s legacy of conservationism and natural sciences.

Roosevelt was also one of the few leaders in 1890s New York who fought against the rampant corruption in the city. New York City is one of the most corrupt cities in American history. The Democratic Party machine became connected to the political patronage The Society of Saint Tammany, or Tammany for short. This setup allowed powerful political positions in the city to be given to members of Tammany, who awarded lucrative government contracts to businesses they owned. These corrupt leaders also sought to influence elections, as in the case of the 1868 governor race. Which, as American Heritage wrote was “an election ‘secured’ … ‘by the grossest and most extensive frauds ever perpetrated in the city, e.g. illegal naturalization of foreigners, false registration, repeating of votes, and unfair counting.’”

Tammany helped millions of immigrants get a job, housing, food and protection in exchange for their vote. Admittedly, Tammany was more efficient than the government bureaucracy at helping the immigrants, but it used it for political power and corruption.

Theodore Roosevelt constantly fought against corruption and machine politics as a New York assemblyman, a member of the Civil Service Commission, president of the police commission, and governor of New York State. Roosevelt was deeply unpopular with all establishment parties because he was against corruption, regardless if it was Republican or Democrat.

When Roosevelt became president of the police commission, the New York Police Department was one of the nation’s most corrupt. “The average cost of obtaining an appointment in the department, the committee learned, was $300,” American Heritage explains. “Promotions also had to be purchased. A captaincy in an area known for its expensive brothels went for $15,000. Once a man had joined the force, he could extort payments from prostitutes and madams, gamblers, and saloonkeepers who wanted to operate illegally on Sundays—anyone who needed police ‘protection.’” This is the situation Roosevelt entered in 1896.

“He approached the problems of the police department hands on,” writes Axelrod. “By day, he performed administrative duties from behind his desk. By night, he personally patrolled the meanest of the city’s mean streets, rousting loafing beat officers, disciplining some, praising others. … He faced the possibility of assault nightly.” Roosevelt would disguise himself and walk the streets at 2 a.m., observing the corruption with his own eyes. The leaders could only stand the upheaval of reform for two years, and then a Tammany candidate returned to power.

The leaders of New York who are ejecting Roosevelt’s statue today, such as former Gov. Andrew Cuomo, former Mayor Bill de Blasio and Gov. Kathy Hochul, are corrupt and extremely radical in their policies, increasing crime and poverty in the state. Around 300,000 New Yorkers have left the state this year.

“It takes courageous leaders like Teddy Roosevelt to lead a nation to greatness!” wrote Trumpet editor in chief Gerald Flurry in “The Rise and Fall of Theodore Roosevelt—and America.” “It takes that kind of leadership to deal with Cuba or Panama, or Iran or Antifa. Teddy Roosevelt demonstrated the spirit that made America great. Any good history book should teach us that America has changed radically since the time of Theodore Roosevelt. If he was right, we are about to lose our superpower status—and a lot more! America the superpower has a terminal illness and is about to die. All you need in order to understand that is a basic education in history.”

The contrast between Roosevelt’s leadership and the current leadership of America today is a major warning of national decline. Removing statues of leaders like Roosevelt deprives people the opportunity to ponder these questions from history and realize how dangerous leaders are today. This attack on history, the decline of American leadership, and the decline of America can all be explained by Bible prophecy. God is sending curses on the nation to bring people to repentance from sin.

“If the nation won’t heed, you can do so individually, and God will protect you,” Mr. Flurry wrote. “But you can’t be weak like the U.S. God wants us to be strong, physically and spiritually.” Embrace the spiritually strenuous life and the courageous spirit that can make your family and nation great!

To learn more about Bible prophecy and lessons from Roosevelt’s life, please read “The Rise and Fall of Theodore Roosevelt—and America.”