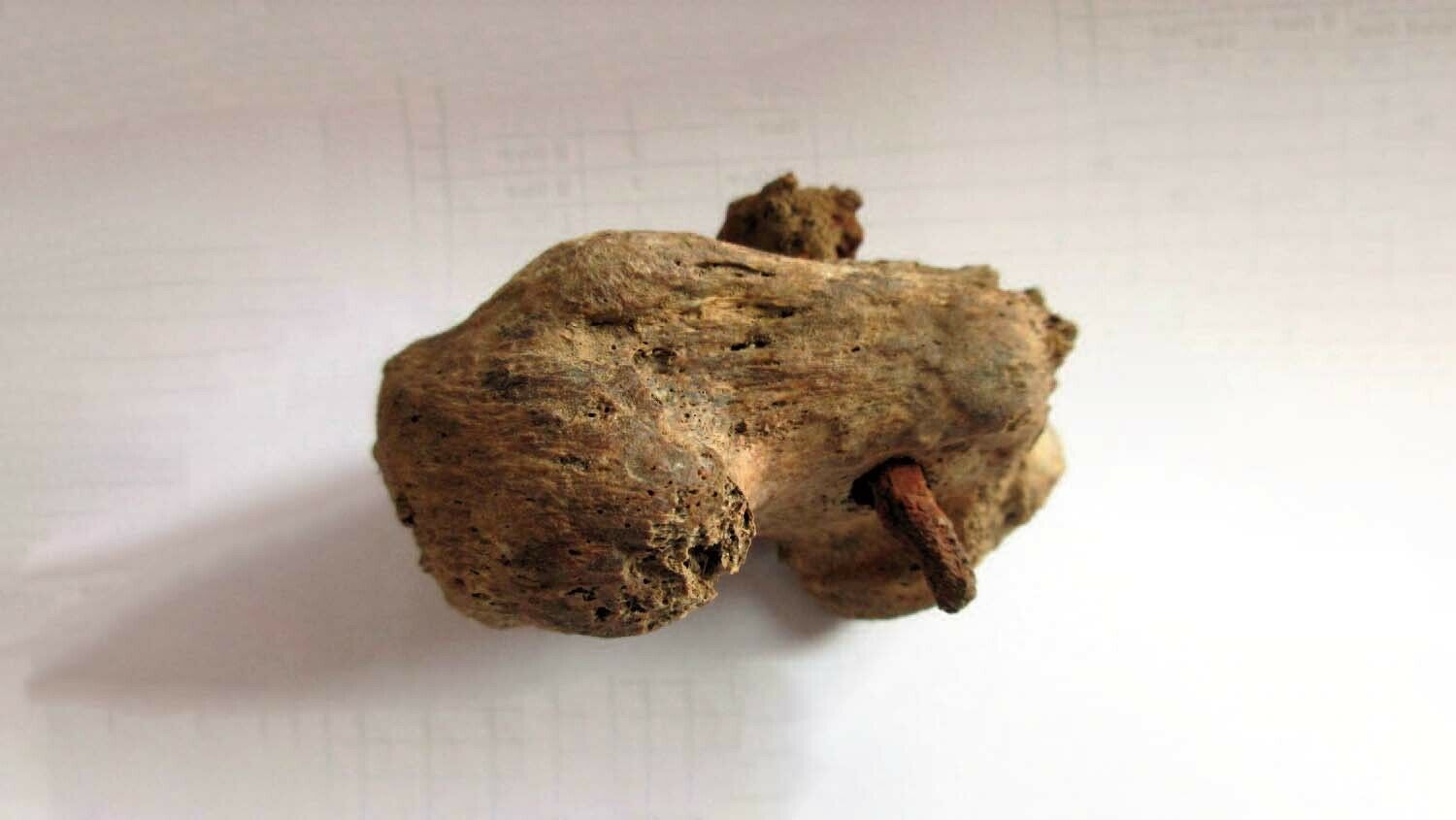 A heel bone and nail from Fenstanton, Cambridgeshire, is best explained as a case of crucifixion.
ALBION ARCHAEOLOGY

A new find sheds light on an old execution method.

Albion Archaeology, a British private archaeology firm, announced the discovery of a Roman skeleton that shows evidence of a crucifixion. Researchers believe these are the first remains of such from northern Europe. The scientists involved published the excavation results in the magazine British Archaeology on December 9.

The skeleton was found in Fenstanton, a village near the famed university town of Cambridge. Anciently, Fenstanton was located near the Via Devana, a major Roman road. With plans to develop a certain section of the land for housing, the developer hired Albion Archaeology to first examine the land for archaeological remains. This led to several Roman remains being excavated between 2016 and 2018.

Among the discoveries were several cemeteries. Altogether, they found the remains of 48 individuals in the archaeological site. One skeleton had a nail in its heel. According to the archaeologists, this likely means the person was crucified. The archaeologists call the evidence “unequivocal.”

dna samples confirm that the figure was a male, between 25 to 35 years old. Carbon dating suggests he lived sometime between a.d. 210 and 340, meaning he would have lived 200 to 300 years after Rome annexed Britain. Rome banned crucifixion for Roman citizens in a.d. 212, except in certain cases. This suggests that the victim could have been either a slave or convicted of treason. How well the ban was enforced in Britain, a faraway outpost of the empire, is anybody’s guess.

Most people associate crucifixion with the New Testament sacrifice of Jesus Christ. But crucifixion wasn’t exclusive to the Romans. The Persians practiced it centuries before Rome. Crucifixion was common among the Hellenistic Greeks and Carthaginians. Even Medieval Japan practiced it. But crucifixion became most associated with the Romans. After the famed slave revolt by Spartacus, Rome crucified some 6,000 slaves along the Appian Way. The future Emperor Titus, when besieging Jerusalem in the Jewish War of a.d. 70, punished captured Jews by crucifying them. Emperor Constantine outlawed crucifixion in the fourth century a.d.

Crucifixion was a particularly painful way to die. According to Roman law, a criminal sentenced to death was to be scourged beforehand. Soldiers would strip the victim naked and tie him to an upright post. He would then be beaten with either wooden staves or a whip. The whip would have metal balls or bits of bone attached. F. P. Retief and L. Cilliers write for the South African Medical Journal: “The extent of the scourging therefore depended largely on the inclination of the [soldiers], was intended to weaken the victim significantly, and invariably resulted in deep wounding, severe pain and bleeding. Frequently the victim fainted during the procedure and sudden death was not uncommon.”

After the scourging, the victim would be led away, sometimes carrying his cross or crossbeam, to be crucified. The common image in many minds is that of a two-beamed cross shaped like a giant, lowercase “t,” with the victim’s hands outstretched on the crossbeam. But crucifixion happened in a variety of manners. The crux immissa (Latin cross) was a common instrument to crucify a person. But it wasn’t the only one. The Romans sometimes used upright posts without a crossbeam (the crux simplex). They even sometimes crucified people on trees (infelix lignum).

The latest discovery from Fenstanton demonstrates this variety of execution methods. Found with the skeleton was a wooden board assumed to be what he was crucified on. According to the Telegraph, “using a wooden board instead [of a Latin cross] is thought to be a local variation in this case.”

This is one of the most important aspects of this discovery. The instrument of crucifixion sheds light on the crucifixion of Jesus Christ.

The typical view of Christ’s crucifixion is that He was executed on a Latin cross. But the original Greek of the New Testament suggests otherwise.

The word “cross” used in the New Testament comes from the Greek word stauros. Strong’s Exhaustive Concordance of the Bible translates it as “a stake or post (as set upright,) i.e. (specially), a pole or cross (as an instrument of capital punishment).” In other words, nothing to suggest two beams intersecting.

[Stauros] denotes, primarily, an upright pale or stake. On such malefactors were nailed for execution. Both the noun and the verb stauroō, to fasten to a stake or pale, are originally to be distinguished from the ecclesiastical form of a two-beamed cross. The shape of the latter had its origin in ancient Chaldea, and was used as the symbol of the god Tammuz (being in the shape of the mystic Tau, the initial of his name) in that country and in adjacent lands, including Egypt.

The Fenstanton discovery then becomes an amazing way for archaeology to confirm the veracity of the Bible. Even for something as specific as Roman execution methods.

Our sister website watchJerusalem.co.il offers a free bimonthly magazine (recently renamed Let the Stones Speak) on biblical archaeology. Each issue is packed with articles about archaeological discoveries—some current, some older—corroborating the biblical account. If you’re interested in archaeology and the Bible, then you’ll love this magazine. Request your free subscription today.

Special thanks to David Ingham and Albion Archaeology for access to images.