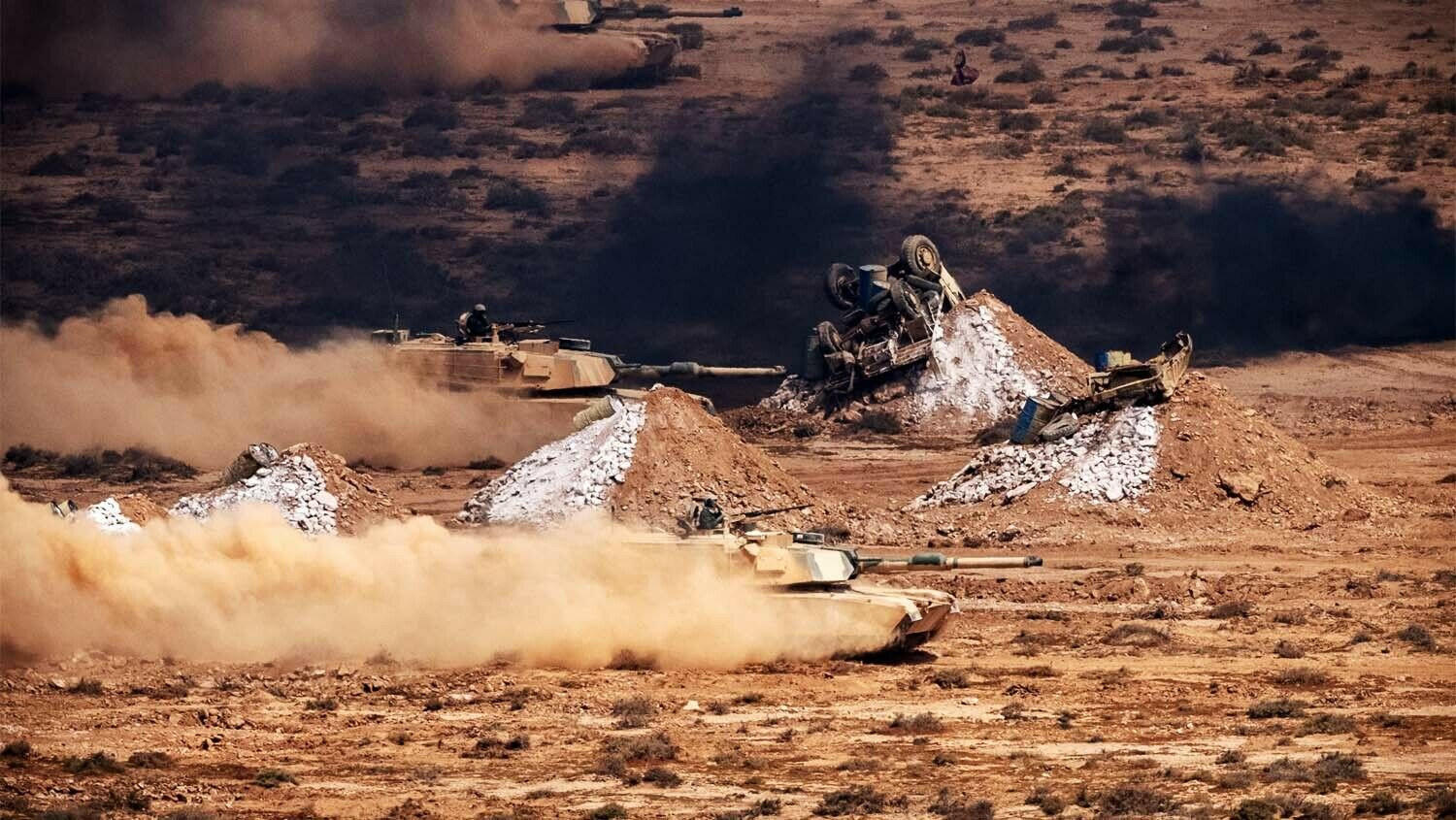 When a military advantage becomes a deadly weakness

When the United States Army and its allies invaded Iraq in 2003, it was a trial run of a new form of high-tech warfare. Instead of a long buildup of conventional forces, the smaller task force would use speed, surprise and “force multipliers.” Force multipliers refer to specific advantages over the enemy that multiply the effectiveness and lethality of military operations. The main force multiplier the U.S. Army utilized during Operation Iraqi Freedom was its massive technological superiority.

Most of the Iraqi Army used Russian military technology, including T-69s, flak cannons, scuds, cruise missiles and air radar. This seemed archaic compared to the technology boasted by the U.S. Army: M1 Abrams battle tanks, global positioning system guided bombs and missiles, stealth bombers, satellite and drone surveillance, and infrared night-vision capabilities. It was America’s first large-scale war with this generation of technology. In less than one month, the U.S. crushed Saddam Hussein’s army and overthrew the regime.

The lifeblood of America’s high-tech military invasion was the Central Command forward operating headquarters in Qatar. centcom commander Gen. Tommy Franks describes the headquarters in his memoirs as a “high-technology factory surrounded by a refugee camp. One of the 26 identical green warehouses in the mile-long rectangular compound, it was as broad and high as a Home Depot.” Over 600 military and support staff worked at the headquarters, working 12-to-16-hour shifts, with the operations running 24/7.

The headquarters—Building No. 217—was the technological nerve center of Operation Iraqi Freedom; at times, it seemed to be wired as intricately as the human brain. Along the sides of every aisle ran tubular protective conduits for the hundreds of miles of power and fiber-optic cables connecting the shelters. The entire complex was cooled to 85 degrees Fahrenheit by an industrial air conditioning plant outside the building.

Inside the command module where the top military leadership worked, Franks had access to the “Command Conference Room, with racks of video teleconference stations and matching stu-iii communications,” and his small war room, which was “equipped with plasma screens and secure communications,” he writes.

With its mega-channel, encrypted satellite voice and data links, and its multiple Secure Video Teleconference facilities, Building No. 217 used bandwidth equivalent to that of a large U.S. city. I could reach Secretary Rumsfeld, [Joint Chiefs of Staff] Chairman Dick Meyers, Rifle DeLong—or the president—within seconds by secure voice or video link. And a Red Switch voice console connected me to the Service Chiefs and my component commanders at the touch of a button.

From the war room, General Franks had instant access to drone surveillance of suspected terrorists and targets, with a military lawyer advising him on whether lethal force could be used on the targets. The commanding general had unprecedented control over the operations of the task force. The capability included observing troop movement in real time, as Franks explains:

The crown jewels of this “network-centric” headquarters were the Blue Force and Red Force tracking systems. Every important shelter in the headquarters was equipped with plasma-screens displays, on which the staff tracked the positions of friendly—“Blue”—coalition formations, all the way down to a tank company or individual aircraft. Virtually every vehicle and every aircraft carried a gps transponder that transmitted coded data on their coordinates, direction and speed via satellite to each component headquarters, to centcom Main in Tampa, to the Pentagon, and to our headquarters in Qatar.

gps coordinates of nearly all friendly forces were sent via satellite to America, and then back over to Qatar. Not only could stateside and theater leaders observe the data, it was also available to combat leaders on the ground. Blue Force Tracker is the most important tool in command and control.

Since that time, U.S. combat systems have become much more sophisticated, complex and dependent on satellite networks. General Dynamics supplies the U.S. Army with several of these systems. The most notable is the Warfighter Information Network-Tactical (win-T). This system allows voice and data connections to be accessed instantly anywhere in the world. The General Dynamics manual for win-T states that it “gives soldiers the ability to pass information seamlessly back and forth from the company commander back up to division and higher echelons—enabled in part by the system’s unique satellite communications’ on-the-move capability.

Can LTE technology be used to improve tactical communications for the U.S. Army? Our report:http://t.co/dU6W81NpCl pic.twitter.com/xOjrJPVn2z

One such tool available to soldiers is the Tactical Ground Reporting System. This provides a Google Earth-type interface where data points can be entered and analyzed, providing better situational awareness and allowing commanding officers to view data from live operations. This is currently deployed in the U.S. Army.

In order for combat units to have access to this network, several transport vehicles have been fitted with communication and Internet equipment. These are dispersed to several unit levels and link back to the unit headquarters. Stationary infrastructure and the satellite network allow this node to connect to a theater cloud. This cloud is connected to the Pentagon. This system works when units are stationary and on the move. (You can find more details on this system here.)

The U.S. Navy (as all modern navies) is increasingly reliant upon combat systems that seek to integrate several data inputs into a command and control console. Radar, infrared and other systems run independently on a vessel, but the data they collect must be coordinated together in order for effective combat decisions to be made. Especially in this age where weapons are controlled electronically and ordnance travels faster than a human operator can react.

This high-tech satellite network has been the key to overwhelming battlefield superiority of American forces all over the world. All military operations are now completely dependent on these networking systems being secure and functional. But what happens when this advantage becomes a deadly weakness?

John Storey wrote for RealClearDefense in “Is This How World War III Begins?”:

Cyber operations could facilitate kinetic operations (like an invasion of Taiwan, for example) by disrupting the other side’s communications so that its military hardware was temporarily powerless to respond. Modern military forces are blind without radar and satellite imagery, deaf without the Internet, and mute without secure telecommunications systems. In a short war, this might be all that’s needed.

Imagine if an enemy power were able to either disable, jam or hack in to America’s combat network. Commanders would be unable to communicate with troops, and leadership would be completely cut off from the battlefield. Drone and satellite imagery would be nonexistent. Most of the high-tech weaponry and vehicles would be rendered useless. Units wouldn’t be able to coordinate against enemy attacks. Military bases and individual combat units would be completely isolated. Confusion and division would reign. Especially if a cyberattack were coordinated with a surprise attack, the U.S. military would be defeated before it had a chance to respond.

The Bible indicates that this is exactly what will happen to America in the imminent future. Trumpet editor in chief Gerald Flurry warned of this danger in 1995 in his article “America’s Achilles Heel”: “Most of us have heard of the story of Achilles, the warrior who was only vulnerable in his heel. America is the greatest superpower this world has ever known. But we have a very vulnerable point in our military—our own Achilles’ heel. It is so dangerous that I am amazed it hasn’t received more publicity.”

He then quoted analyst Joseph de Courcy, who wrote: “Computer dependence is the Western world’s Achilles’ heel, and within a few years this weakness could be tested to the full” (emphasis added).

Mr. Flurry then quoted a key Bible prophecy in Ezekiel 7: “They have blown the trumpet, even to make all ready; but none goeth to the battle: for my wrath is upon all the multitude thereof” (verse 14). He continued, “The trumpet of war was blown in Israel—mainly America and Britain. It seems everybody was expecting our people to go into battle. But the greatest tragedy imaginable occurred! Nobody went to battle—even though the trumpet was blown! Will it be because of a computer terrorist?

“The overall reason this crisis occurred was because God’s ‘wrath is upon all the multitude thereof.’ Will one of God’s curses come upon us in the form of computer terrorism? We are not receiving God’s blessings. We are being cursed (Leviticus 26; Deuteronomy 28).”

This computer dependence is America’s Achilles’ heel: the key to a quick victory over the United States. America might still have incredible military power, but our enemies know its Achilles’ heel and will fully exploit it to devastating effect.

God has stopped supporting the American military because of national sins and rebellion. This correction is what it takes to bring the whole world to repentance. Turning away from sin, turning to God in heart-wrenching prayer, and obeying His laws are the key to having victories and escaping defeat. “If my people, which are called by my name, shall humble themselves, and pray, and seek my face, and turn from their wicked ways; then will I hear from heaven, and will forgive their sin, and will heal their land” (2 Chronicles 7:14). America needs to be healed, but unfortunately people won’t turn to God. But you can. To learn about how, please read Ezekiel—The End-Time Prophet.