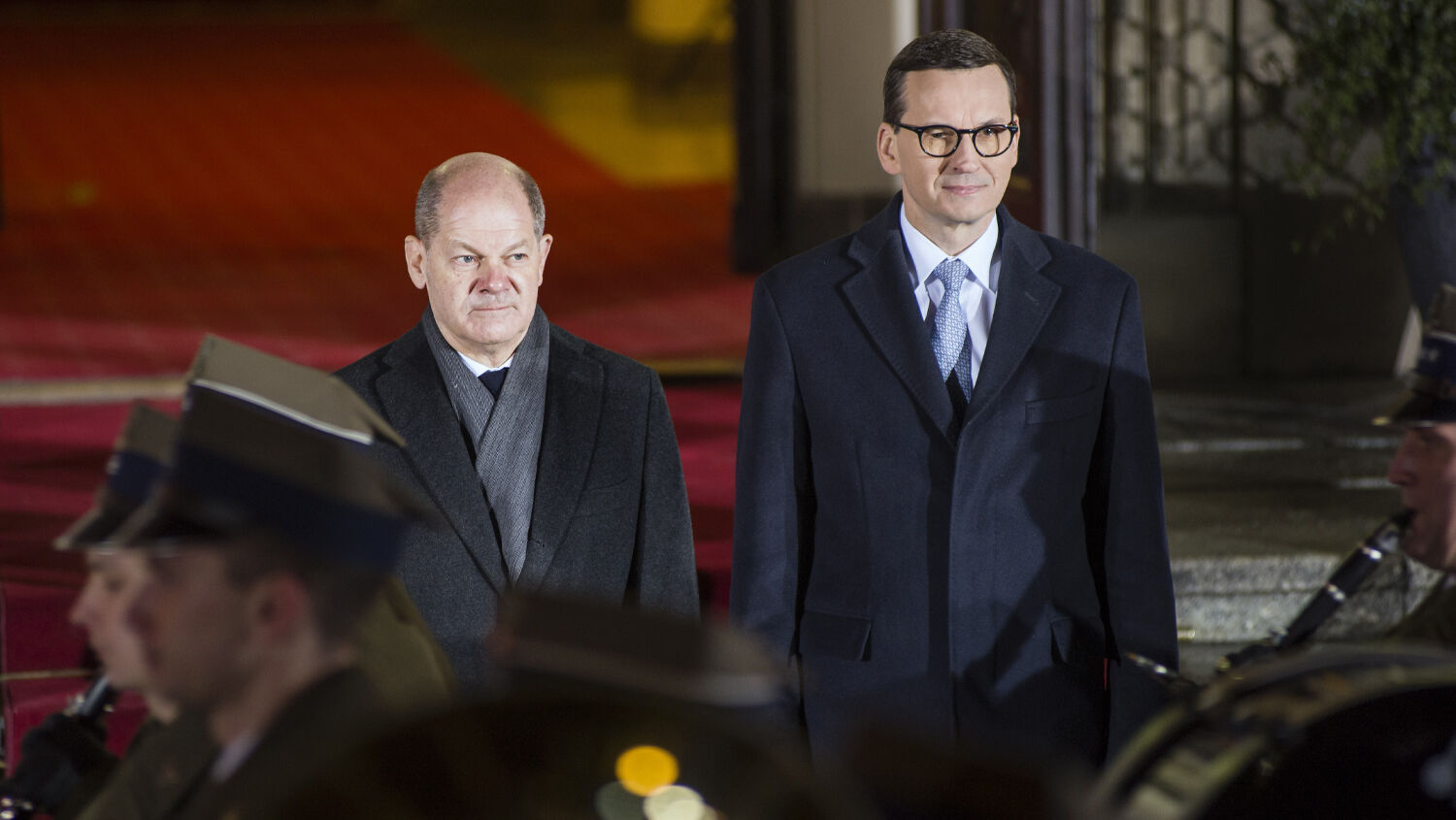 Following a visit to Paris and Brussels, German Foreign Minister Annalena Baerbock visited Poland on December 10, followed by German Chancellor Olaf Scholz on December 12. Poland is currently under pressure from its belligerent neighbor Belarus and from the European Union. The EU accuses Poland of undermining its judiciary and the balance of power in the country. Ahead of the meetings, Poland had its own demands for Germany in the form of large payments for war damages dating back to World War ii. While Baerbock and Scholz tried to smooth the relations, they were confronted with much criticism.

To greet the new German government, a poster campaign began in Warsaw that pictured recent German politicians alongside their counterparts from World War ii. The poster below shows the former chancellors Angela Merkel, Helmut Kohl and Konrad Adenauer, ex-Foreign Minister Heiko Maas, German President Frank-Walter Steinmeier and Ambassador Arndt Freytag von Loringhoven, together with Adolf Hitler and Nazi propaganda minister Joseph Goebbels. “Dear Mr. Freytag! Can the German authorities, who are so interested in the rule of law in other countries, finally deal with Germany’s scandalous lawlessness and pay Poland reparations for the damages and for the German crimes of World War ii?” the poster reads. Calculations from 2017 put war-time damages at $903 billion.

“If we then consider that the posters also feature pro-government media, whose main source of income is advertising partnerships with state-owned companies, and an institute funded by the Polish state, we can assume that the campaign was largely financed by taxpayers’ money,” n-TV wrote. From common citizens to the top of the government, Poland’s accusations against Germany’s plans to create an EU superstate are harsh. In Germany’s new coalition agreement, the government declared the goal to establish a European “federal state.”

Poland’s Law and Justice party leader and the most powerful Polish government official, Jarosław Kaczyński, said: “The Germans have laid their cards on the table. They want to establish the Fourth Reich.”

“Chancellor Scholz and Foreign Minister Baerbock flatter the Polish government. In return, they receive public lectures,” Spiegel Online commented. “Is the values-based foreign policy over before it has even begun?” Within the first week of the German coalition’s leadership, reality has crushed many of its ambitions. Germany’s new government is inexperienced, weak, uncharismatic and boastful. It’s hard to see how Poland could ever agree to enter a deeper cooperation with the EU led by the current German government.

There is, however, a way that leads to unity that will likely be accepted by Poland. The late Herbert W. Armstrong wrote in the January 1979 issue of the Plain Truth:

The nations of Europe have been striving to become reunited. They desire a common currency, a single combined military force, a single united government. They have made a start in the Common Market. They are now working toward a common currency. Yet on a purely political basis, they have been totally unable to unite.

In only one way can this resurrected Holy Roman Empire be brought to fruition—by the “good offices” of the Vatican, uniting church and state once again, with the Vatican astride and ruling (Revelation 17:1-5).

In Poland, the Catholic Church has already established its rule quite firmly. Deutschlandfunk.de noted in 2019: “In hardly any other EU country are the state and church as closely connected as in Poland.” Priests and bishops cooperate closely with the secular rulers and support the conservative-nationalist Law and Justice government, which secures them money and influence.

This church-state cooperation is remarkable considering the country’s history behind the Iron Curtain. Yet it was prophesied, as explained in our free booklet He Was Right.

The EU, however, has drifted toward secularism, refusing to acknowledge the common heredity that all countries in Europe share. But as pressures from Eastern Europe and the Middle East rise, calls for European unity only get stronger. European leaders will soon realize that their way to unity will have to go through the Catholic Church.

A united Catholic Europe will also be greatly welcomed by Poland. In 1980, nine years before the Berlin Wall fell, Mr. Armstrong wrote: “It now looks entirely feasible that Yugoslavia may be included in this revived Roman Empire. Also the pope’s native Poland and Romania, and possibly Hungary. Add Austria, Germany, Italy, Spain, Portugal and France. There will be a union of 10 nations in the general area of the medieval Roman Empire in the new united Europe. Probably Holland, Denmark, Norway and Sweden will not be included [in the final 10]. But Ireland may. Britain will not! … I have been forecasting this revived Roman Empire publicly since February 1934! Now it may go together suddenly, rapidly!”

In Daniel 2 and Revelation 17 we read about 10 kings uniting 10 nations or groups of nations in this end time. But we also read that it will be a fragile union. “And as the toes of the feet were part of iron, and part of clay, so the kingdom shall be partly strong, and partly broken. And whereas thou sawest iron mixed with miry clay, they shall mingle themselves with the seed of men: but they shall not cleave one to another, even as iron is not mixed with clay” (Daniel 2:42-43). Only the Catholic Church, as the first verses of Revelation 17 show, can bring about temporary unity.

Europe’s coming reunification is not speculation; it is part of a series of prophecies that are most assuredly going to be fulfilled. Request a free copy of He Was Right to learn more about Mr. Armstrong’s Bible-based prophecies and how they came and are coming to pass. The Bible has a message for our day, though few understand it.