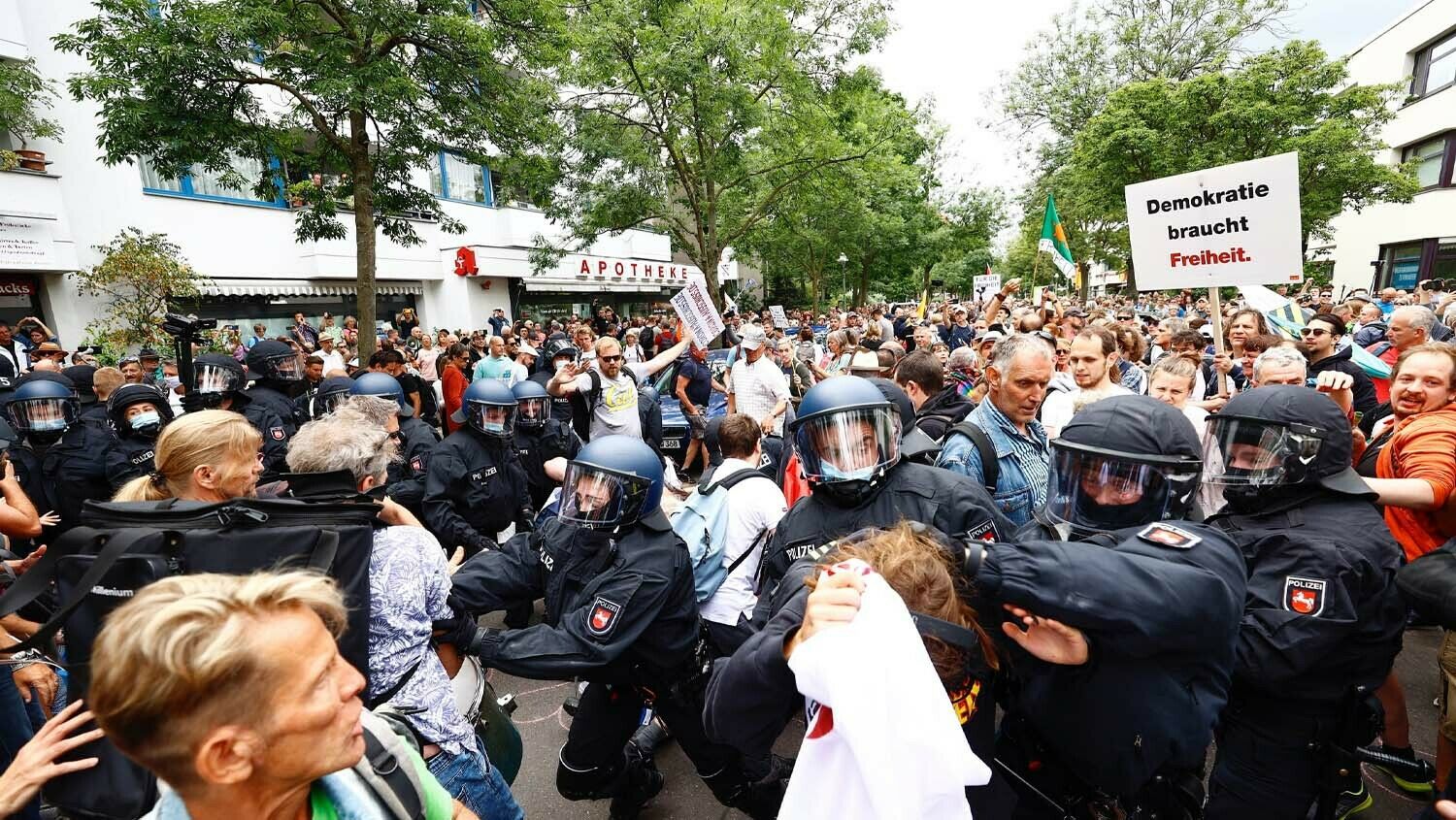 Throughout the coronavirus pandemic, Germany’s police forces have amassed a frightening amount of control. Germany is looking increasingly like the police state Allied forces defeated 76 years ago. Last week, a video emerged showing nine police officers surrounding an 80-year-old woman who refused to show her papers. This video highlights the direction Germany is headed.

Hi Aaron,
this was not about the vaccination pass. The lady was on a Monday walk (Protest in Göppingen) with others and could not identify herself. Friends of mine were on the scene and can be heard in the video as well. I spoke with them. Scary Germany.https://t.co/dDawXkNEXF

The interior ministers of the federal states in Germany agreed to deploy more police forces to monitor coronavirus rules violators. Bavarian Interior Minister Joachim Herrmann noted that the police must now set new priorities, and the control of traffic offenses is of secondary importance.

Spokesman of the Federal Interior Ministry Steve Alter said: “Like any organization in this government, you have to evolve and adapt to current phenomena. That’s what the police have always done in the past.” One could look back to Nazi-era Germany to see proof of that.

In Dresden, Saxony’s state parliament voted on December 6 to extend unconstitutional restrictions against the population. This was a vote that citizens with torches and drums demonstrated against outside Health Minister Petra Köpping’s home a few days prior. German Chancellor Angela Merkel condemned this protest as an “attack on democracy.” Government spokesman Steffen Seibert said the December 3 demonstration was “deeply outrageous.”

“The demonstrators want nothing more than to instill fear,” Seibert said. “There can be no place for that in the democratic debate about the right way forward in this pandemic.” Yet the government itself has weaponized fear to force millions to stay home. Meanwhile, politicians pursue their radical agenda.

Police intervened to stop multiple protests in Saxony on December 6, as demonstrations with more than 10 people are banned in the state. As protesters tried to reach the Saxony parliament building, the police set up blockades and closed down the streets. “Gatherings of more than 10 people were dispersed, potential demonstrators were sent away,” Bild.de noted. “The police had already announced a ‘tougher approach’ in advance. Water cannon, horse and dog squadrons are on standby.”

All over Europe, videos have emerged of police forces brutally beating protesters. Some protesters are demonstrating against a vaccine that caused the death of a loved one. In Italy, protesters marched with images of those they had lost to the vaccine. But the police response continues to grow stronger.

In Italy our government forbid us to demonstrate or protest against covid mandates.

So we are now silently walking around in big groups, holding the photos of the victims of the experimental jab. pic.twitter.com/WzaqWnbRW7

Following World War ii, the Bundeswehr was banned from any interference in Germany’s domestic affairs. Over time, this law has been watered down. The Bundeswehr was eventually granted permission to assist in national emergencies. Now it appears the government creates emergencies so the military can be mobilized on the streets.

Gradually, the German people are getting used to the police and military controlling their every move.

Additionally, government parties that were once against a vaccine mandate are now supporting it. With the new coalition “there will be new bodies and new commanders,” Melanie Amann, member of Spiegel’s main editorial office wrote. “Above all, however, there are completely new ideas emanating from the parties involved that they must now represent. These are tough times for Liberals and Greens.”

She further noted that the Free Democrats would have previously vehemently opposed a vaccine mandate, but now, as part of the new coalition, they are demanding a vote on the issue. Also, the Green Party would have sharply criticized putting a military general over the covid crisis response team and warned of “the danger of a militaristic pandemic policy.” But the “Greens are no longer part of the opposition but soon part of the government, and therefore, also in favor of the general in the chancellery. We are really experiencing an upside-down political world these days.”

On December 2, the German Armed Forces honored Chancellor Merkel with the traditional large military music parade by the Staff Music Corps and 74 torchbearers. This kind of ceremony dates back to the 19th century. While the guest list was reduced from the usual 600 to 200, there is still a level of hypocrisy in what the government is allowed to do versus the people. Furthermore, this style of parade honors the history of a dictatorial system that suppressed Europeans for centuries.

During the parade, soldiers prominently carried an ensign topped with a Roman Empire-style eagle and other heraldry, bearing eagle emblems. The symbol of the eagle has accompanied Germany for more than a millennium; its presence became famous through the work of the late Charlemagne of the eighth century. (Interestingly: Charlemagne brutally suppressed the people of Saxony to convert them to Catholicism.) In the past century, the eagle with outspread wings, representing combat readiness, and a swastika below its feet became a famous feature of the Nazi regime.

While the history of the Holy Roman Empire, over which Charlemagne and Hitler reigned, is being celebrated by elites in Berlin, average people in Saxony and other German states are being suppressed. One could argue that the December 3 gathering in front of Köpping’s home was wrong, but when you consider the strict measures being enforced, what other option do citizens have? People are desperate. The police, those who are charged with protecting the people, are in lockstep with the state, violently enforcing the government’s covid-19 measures.

Millions of people are blindly following the so-called “science.” Many politicians believe their undemocratic measures are the best course of action. The Bible describes this age in which we live perfectly: “But evil men and seducers shall wax worse and worse, deceiving, and being deceived” (2 Timothy 3:13).

We are seeing the rise of the final resurrection of the Holy Roman Empire, as recorded in Revelation 13. As has occurred in the past, the citizens will be suppressed and forced to take on a “mark.” The late Herbert W. Armstrong wrote: “Yes, the mark of the beast once again will be enforced! No one will be able to hold a job or engage in business without it. Those refusing will once again be tortured and martyred—probably by the secret police of the political state—but at the behest of the church!”

Germany and many other European countries are gearing up to enforce this mark! (If you don’t know what this mark is, request a free copy of Who or What Is the Prophetic Beast?) As the measures in Germany, Italy, Austria and other European nations get more strict, expect the police to grow stronger and stronger. And expect the oppression to become more and more tyrannical.