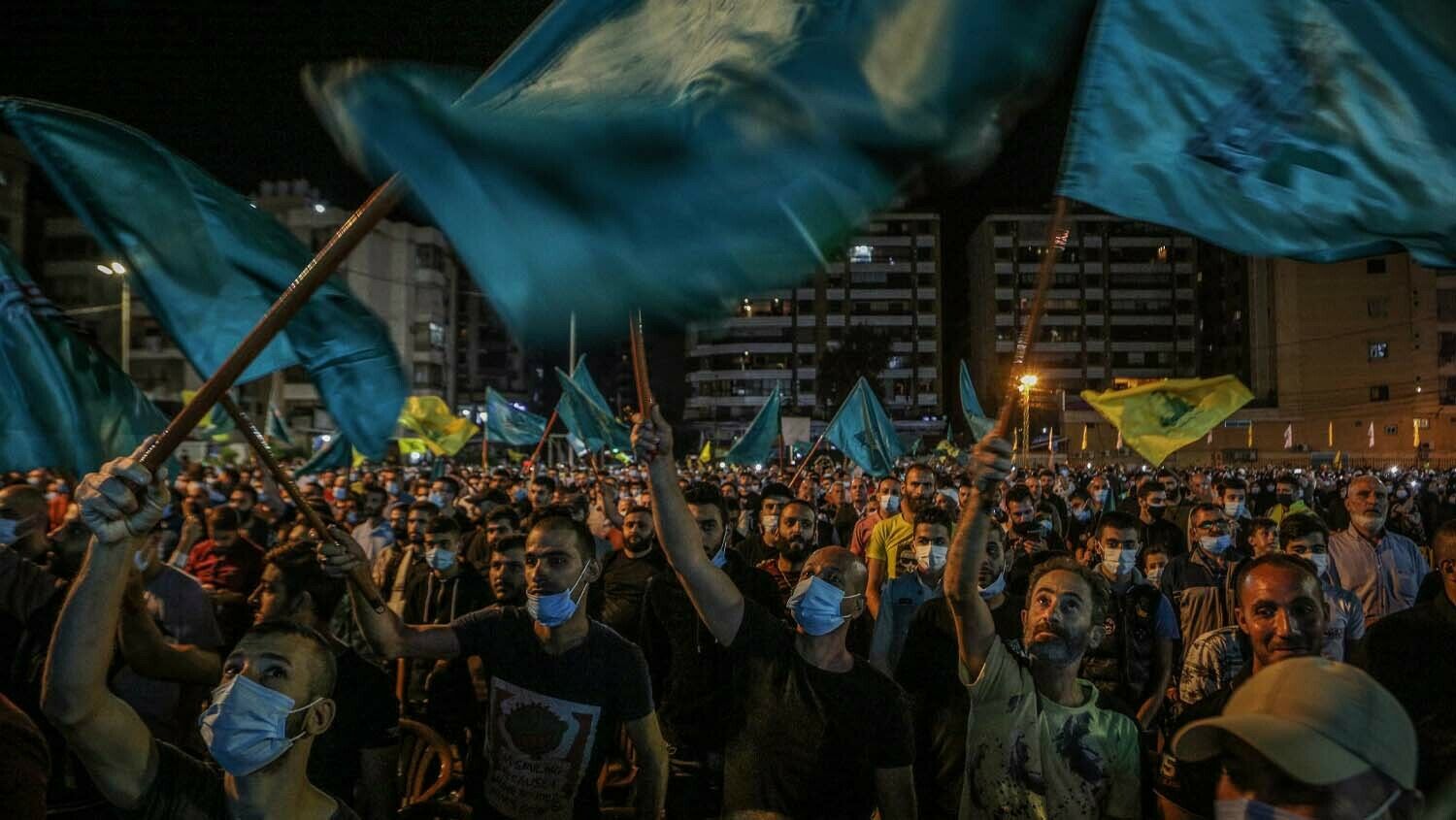 Iran’s dominance is making Lebanon an outcast to the world. Will internal discontent lead to a new civil war?

jerusalem
Lebanon continues to convulse following the devastating explosion that ripped through downtown Beirut in August 2020. At the time, the Trumpet forecast that the blast was an epic turning point in the fate of the tiny nation of 5 million. “I believe what happens next in Lebanon will validate not only the Trumpet, but more importantly the Word of God, upon which we base our news forecasting,” wrote editor in chief Gerald Flurry. We wrote that Iran would lose its great power over Lebanon.

Yet a year later, Iran still dominates Lebanon through its Lebanese terrorist militia and politicians. But the nation is still reeling from the Beirut blast, and Hezbollah has come under increasing pressure in Lebanese society and from other nations as well.

In the end, biblical prophecy will prove correct: Iran will indeed lose most or all of its power there as Lebanon pursues an alliance with Saudi Arabia and a German-led Europe. This change is critical for the formation of what the Bible says will become the dominant Middle East alliance directly preceding the Second Coming of Jesus Christ.

Lebanon Is a Vassal

While the world may have moved on from the most filmed major explosion in history, Lebanon has not. A year later, with much of the port front still being restored, no one has been brought to justice for the deaths of almost 200 mostly Lebanese Christians. For family members of the deceased, the reason why justice hasn’t prevailed is as simple as it is infuriating. A judicial inquiry into who allowed 2,750 metric tons of ammonium nitrate to sit at the port as a massive bomb has, thus far, held no one to account. That is because, whenever an investigator gets close to casting blame, Hezbollah and its allies call for the investigator to be removed.

Hezbollah succeeded in removing the first investigator and is pushing to remove the second, Judge Tarek Bitar. The closer Bitar gets to making indictments and arrests, the more pressure he faces to stand down. Given that Hezbollah controls much of Lebanon’s port facilities and Hezbollah politicians are the ones opposing Bitar and other investigators the most, it is likely that the investigation will implicate members of Hezbollah. Bitar, who is avowedly apolitical, has become a hero of the blast victims’ families, as well as of the Lebanese who desire judicial transparency.

On October 12 Bitar issued an arrest warrant for Ali Hassan Khalil, a former finance minister and Hezbollah associate. Days later, Hezbollah and its fellow Shiite movement, Amal, led street protests against Bitar’s inquiry and demanded his removal. As the protest crossed from a Shiite neighborhood into a Christian one, gunfire rang out. Christian Lebanese forces fired upon the protesters, who quickly returned fire in an hourlong gun battle that resembled scenes from Lebanon’s civil war. It was the boldest anti-Shiite attack in decades. Seven Shiite protesters were killed, and 32 others were injured.

Since that gunfight, the sectarian tensions have slacked somewhat, and Bitar has plowed ahead with the investigation. Hezbollah must choose whether to allow him to expose its connection to the port explosion or use more forceful means to stop his investigation. Either way, they will face the wrath of the Lebanese people, a majority of whom support Bitar’s work.

The more Hezbollah intervenes in the proceeding, the more it implicates itself in the port explosion and the more it exposes just how much Lebanon’s judicial process, like so much of its government, is dominated by Iran.

Iran’s domination of Lebanon is also becoming an international issue. On October 29, Saudi Arabia shocked the Lebanese by recalling its ambassador from Beirut. A day later, Bahrain, Kuwait and the United Arab Emirates recalled their ambassadors. Saudi Arabia said it was retaliating to Lebanon’s information minister blaming Saudi Arabia for “aggression” against Iran-backed Houthis in Yemen. This was a thin excuse for deserting Lebanon during its most severe economic slowdown in history.

Saudi Arabia’s real reason for leaving Lebanon is that the country is no longer a sovereign state. It has become obvious that it is nothing more than a modern Persian satrapy, completely controlled by Iran. “The Saudis have long understood that Lebanon is an Iranian-controlled province, and they no longer want to throw good money after bad,” explained Tony Badran, a Lebanon expert working for the Foundation for Defense of Democracies.

“I think we have come to the conclusion that dealing with Lebanon and its current government is not productive and not helpful, with Hezbollah’s continuing dominance of the political scene,” Prince Faisal bin Farhan Al Saud, Saudi Arabia’s minister of foreign affairs, told cnbc the day after his country recalled its ambassador.

Saudi Arabia has been locked in a decades-long cold war against Iranian hegemony across the Middle East. It is actively fighting Iranian foot soldiers who are supporting Houthi terrorists in northern Yemen. The Lebanese information minister’s criticism of Saudi “aggression” was hardly novel, but with Iranian domination coming out into the open, the Saudis were looking for a reason to cut their losses and move on from investing in a state controlled by their archenemy.

Lebanon’s reaction appears to have proved Saudi Arabia’s point. Typically, a government that loses the ambassador of its third-largest trading partner will seek to heal the wound and end the spat, perhaps by removing the information minister or at least issuing an apology. But the information minister, a Christian but an ally of Hezbollah, has refused to resign or even apologize. Two Hezbollah ministers have said that if he is forced to step down, they will resign, which would dissolve the entire Lebanese government.

With its ambassador recalled and no attempts being made at reconciliation, Saudi Arabia is considering further punitive measures, such as banning Lebanese agricultural imports and potentially freezing remittances from the 500,000 Lebanese working in the Gulf. This would sink Lebanon further into the financial abyss.

According to Badran, Saudi Arabia’s decision to ditch Lebanon actually started in 2016. In 2013, the Saudis had promised to provide $3 billion in funding to the Lebanese Army. This was intended to strengthen the Lebanese military against Hezbollah’s growing power in the country. Yet three years later, with only a small portion of the money spent, Saudi Arabia froze the funds. This was an early indication that the Saudis believed that even Lebanon’s military was under Hezbollah—and therefore Iranian—control.

Since then, Saudi Arabia has tried other carrots and sticks to pull Hezbollah away from Iran, all unsuccessful. Its October 29 decision appears to signal that Saudi Arabia has all but given up on changing Lebanon from the inside out. Instead, “The Saudis want to weaken Hezbollah inside Lebanon,” Mizrachi suggested, “and they think that the way to do it is to pressure the Lebanese system and to make the Lebanese even more dysfunctional than it already is.”

By banning Lebanese agricultural imports and threatening further economic sanctions, Saudi Arabia is effectively now sanctioning not just Hezbollah but the entire Lebanese state. This is bad news for a nation that is already experiencing soaring inflation, capital flight, rolling blackouts and slow recovery from the port explosion. Saudi Arabia is hoping that bailing on Lebanon will cause enough internal discontent that the Lebanese themselves will rise up against Hezbollah.

As other international backers join Saudi Arabia in cutting off Lebanon, the prospect of increasing civil strife and violence becomes more realistic.

About two thirds of Lebanese are Muslim, split evenly between Sunnis and Shiites. Roughly a third are Christian, most of them Maronite Catholic. Lebanon’s religious medley makes it a particularly unstable mixture in the already-volatile Middle East. Currently, many of Lebanon’s Christian leaders are allied with Hezbollah, merely to safeguard their own positions of power. Yet as pressure increases both at home and from abroad, it will become more difficult for these leaders to maintain their partnership with Hezbollah. Christians protesting on the streets are starting to demand a change from their leaders. If these leaders finally break from Hezbollah’s sway, there will be a major power shift in Lebanon.

If public anger against Hezbollah boils over, a major uprising would put enormous pressure on Hezbollah, and therefore Iran, to get out. Yet it is unlikely Iran would surrender its dominant position in Lebanon without a fight.

This means one thing: Civil war will once again come to Lebanon.

According to Bible prophecy, the result will not be a victory for Hezbollah. Instead, the Sunnis and Christians will emerge victorious. This alliance in Lebanon will actually be a microcosm of a much larger Sunni-Catholic alliance that is prophesied to gain power over the broader Middle East.

Based on an as yet unfulfilled prophecy recorded in Psalm 83, Mr. Flurry has forecast that Iran’s power is destined to weaken in Lebanon and Syria. Both these nations, along with other Sunni nations including Jordan, Turkey and several Gulf states, will join together with a resurgent Catholic Europe, led by Germany. With the only substantial Christian population, Lebanon’s conflict will likely be the gateway for increased European intervention in the Middle East. Thus, as Lebanon begins to boil over, watch for Europe to become more invested in the outcome.

“Continue to watch Lebanon,” Mr. Flurry wrote immediately after the 2020 explosion. “As you watch this terrible scenario unfold, recognize that bloody event as one in a chain reaction that the Bible says is destined to end in the Second Coming of Jesus Christ! God has laid it all out for us to see in His majestic prophecies.” Beyond civil war, there is still hope for the Lebanese people. And in witnessing God’s end-time prophecies play out in Lebanon, there is hope for all mankind as it shows the days of warfare are almost over.

To learn how Europe’s alliance with many Sunni states, including Lebanon, will lead to Jesus Christ’s return, request Gerald Flurry’s free booklet The King of the South.