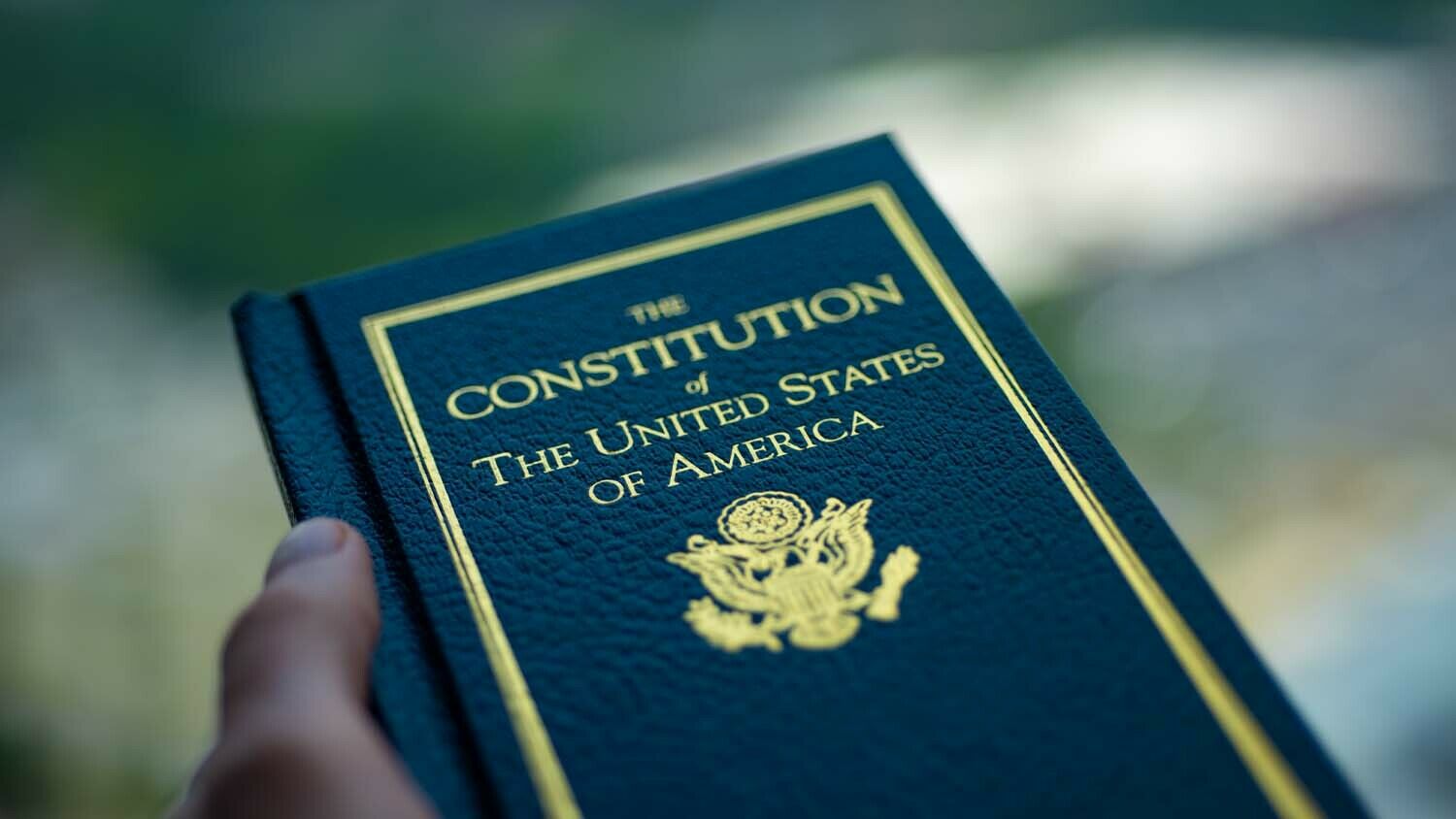 An ancient strategy to destroy a nation resurfaces in America.

“Where the book of the covenant was found in the possession of any one, or if any one adhered to the law, the decree of the king condemned him to death” (1 Maccabees 1:57). This ancient passage of text from 2,000 years ago has been rattling in my brain for the past two days. Let me tell you why: It has everything to do with what is happening in the United States of America.

On Saturday night, I watched Tucker Carlson’s much-forbidden three-part documentary on the events of January 6 and its aftermath. The one scene that particularly stood out to me was when gun-wielding Federal Bureau of Investigation agents invaded the home of Paul and Marilyn Huper, a middle-aged Alaskan couple from the small town of Homer. Their crime: attending the January 6 “Save America” Trump rally. The fbi thought Mrs. Huper had stolen Nancy Pelosi’s laptop, but in actual fact, the couple didn’t even enter the Capitol that day.

However, it wasn’t the fact that the fbi invaded their home that got my attention; it was which of the Hupers’ personal items the fbi seized, presumably to be used as evidence that they were conspirators against the state. After cuffing and questioning the couple, an fbi agent took Mrs. Huper’s laptop and something else—something you might have in your home too.

That is a good question.

The answer provides a moment of clarity about the course the Biden administration is taking America in its self-proclaimed war against “domestic terrorists.” Here is a United States federal agency engaged in a predawn raid of attendees of a political rally, and part of the confiscated evidence is a personal copy of the foundational law of the United States. As Mr. Huper told Carlson, “If you [have] a copy of those rights, you are considered to be an extreme radical today.”

With that in mind, now consider the quote from the book of Maccabees: “Where the book of the covenant was found in the possession of any one, or if any one adhered to the law, the decree of the king condemned him to death” (1 Maccabees 1:57).

The Hupers were not condemned to death for possessing a copy of the Constitution. Nonetheless, Mr. Huper’s question needs to be asked: What does it say of the motives of the Biden administration if its agents are going around seizing personal copies of America’s foundational book of the covenant? To answer that, it’s worth exploring the ancient parallel, especially considering the Bible prophesies specifically that the ancient type would play out again in this end time.

The first book of Maccabees is an eyewitness account; it’s an accurate historical telling. It describes the events of the early second century, about 300 years after the Old Testament ends and 200 years before the New Testament begins. And yet the Bible itself is not silent about these events.

The aged Prophet Daniel recorded a vision from God shortly before he died that prophesied what was to befall the people of Israel both in the years following Daniel’s death and also in the last days. The account recorded in Daniel 11 contains the most accurate telling of provable historical events of the 300 years following Daniel’s death, but it is mainly for our time today (Herbert W. Armstrong described this in his free booklet Proof of the Bible).

In Daniel 11:21, the account slows down and focuses on the work of a singular individual, a vile, despicable and monstrous person that history knows as Antiochus iv.

King Antiochus was narcissist-in-chief, calling himself Epiphanes, meaning “God manifest.” He ruled over the Seleucid Empire, which, during the time of his rule, comprised the territory of modern-day Iraq, Syria, Lebanon and, crucially, Judea.

Antiochus Epiphanes is also the chief antagonist in the history of the Maccabees: Jews who revolted against Antiochus’s decrees. Both Daniel and 1 Maccabees detail the events of Antiochus’s actions against the Jewish people—Daniel as prophecy and the Maccabees as history.

Crucially, both accounts tell of the inexplicable wrath Antiochus inflicted upon the Jews. His campaign was not just about trying to control a subject population. It wasn’t enough for Antiochus to attempt to destroy the Jewish people. He also sought to destroy every vestige of the law he could find. He sought to blot out the constitution of the Jews.

“Where the book of the covenant was found in the possession of any one, or if any one adhered to the law, the decree of the king condemned him to death” (1 Maccabees 1:57). The “book of the covenant” in this historical case was the foundational books of the Bible. They were looked upon by many of the Jews as holding the weight of constitutional law. Clearly, Antiochus’s hatred was not just against a group of people but against their foundational law, the source of the Jewish people’s identity.

“For Antiochus, it wasn’t enough to kill tens of thousands of Jews. He tried to kill their religion,” wrote Trumpet editor in chief Gerald Flurry in his 2014 article “What Inspires President Obama’s Relationship With Israel.” Without being able to practice the law, nor even keep a copy of the law, the Jewish people would likely have melted into history like other ancient people.

Thankfully, history bears out that Antiochus was unsuccessful. In fact, it was zeal for upholding the law that motivated the Maccabean revolt against Antiochus. “Let every one who is zealous for the law and supports the covenant come out with me!” said Mattathias, the father of the rebellion (1 Maccabees 2:27).

Yet Antiochus’s strategy was clear: By blotting out the constitution, Antiochus sought to blot out the Jewish people.

Now consider again what Mr. Huper told Tucker Carlson: “They seized my copy of the Declaration of Independence and the Constitution … as evidence against me. What does that say?”

What does it say about the spirit behind this administration that seeks to undermine the foundational law of the nation? It used to be that judges—whether originalists or those who favored a more liberal interpretation—argued over the nature of the Constitution. But now America’s leaders want to blot out the Constitution altogether.

It used to be that card-carrying Communists were deemed enemies of the state; now it’s those who carry a copy of the Constitution.

It is true that the U.S. Constitution is not the law of God (although much of it is founded on biblical values). Yet the Constitution is the foundational law that preserves the unity of the United States.

This same hatred toward the Constitution was on display throughout the administration of Barack Obama. One highly illustrative example is when the Obama administration’s Internal Revenue Service was exposed as targeting tea party organizations and, as the inspector general’s report revealed, “political action type organizations involved in … educating on the Constitution and Bill of Rights.”

Commenting on the inspector general’s report at the time, Georgetown Prof. Nicholas Quinn Rosenkranz wrote, “[F]ederal officers swear an oath to ‘support and defend the Constitution of the United States against all enemies, foreign and domestic.’ It is chilling to think that these same officials who are suspicious of the tea party are equally suspicious of the Constitution itself. …

“This is a new low for American government—targeting those who would teach others about its founding document. … In short, never before has the federal government singled out for special scrutiny those who would teach their fellow citizens about our magnificent Constitution. This is the new innovation of Obama’s irs” (Washington Post; Sept. 23, 2014).

Clearly, what started as a directive by Obama’s irs to target those who dare educate Americans about the Constitution is getting more personal. Now, a personal copy of the U.S. Constitution in your home is evidence that you are an enemy of the state.

Where does this hatred for the Constitution originate? Could it be that the same spirit that motivated Antiochus Epiphanes to attack anyone who had a copy of the law is at work inside the United States?

As Mr. Flurry wrote, Antiochus didn’t come up with the idea himself: “Any time a person like Antiochus is involved, it’s more than just Antiochus that you are dealing with. There is a God-hating evil spirit power at work.”

Antiochus’s face might have changed, but the strategy and the spirit remain the same.

These parallels between what happened to the Jews 2,000 years ago and what is taking place today in the United States are worth considering. The Bible said this would happen. To understand why, please request Gerald Flurry’s free booklet America Under Attack.