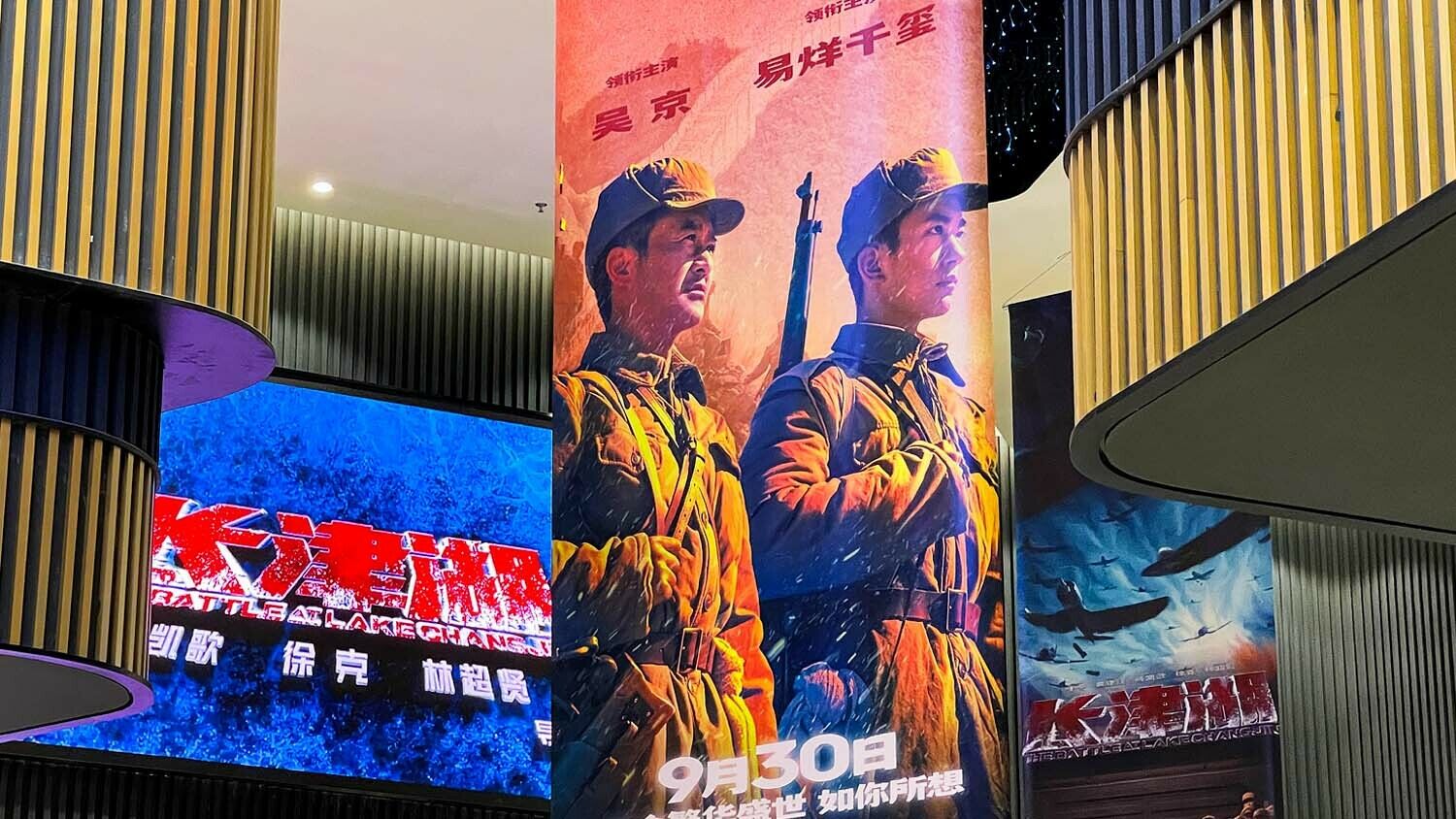 A poster for The Battle at Lake Changjin is displayed at a cinema in Beijing ahead of China’s National Day on September 30.
VCG/VCG/Getty Images

What this year’s top-grossing movie means for America, China and the world

The Battle at Lake Changjin depicts a group of Chinese “winter warriors” who heroically fight off advancing American forces in North Korea during the Korean War. Chinese patriots face off an intimidating Yankee army at Lake Changjin, better known to Westerners as Chosin Reservoir. The main villain is United States Gen. Douglas MacArthur.

The Battle of Chosin Reservoir (Nov. 27–Dec. 13, 1950) marked the end of the United Nations’ advance into North Korea. National Interest called it “the decisive moment of the war.” About 120,000 Chinese soldiers faced off 30,000 UN troops made up of Americans, Brits and South Koreans. The Chinese won the battle and forced the UN troops to flee, but it cost the Chinese greatly. Encyclopedia Britannica estimates the Chinese Ninth Army’s total losses to be between 40,000 and 80,000, including both combat losses and those who died from the elements (a Siberian cold front made temperatures that winter even more extreme). The UN forces lost roughly 17,800—most of them American.

There are many issues with this film. For one, North Korea invaded South Korea, and the UN forces were fighting a defensive war. Also, China declared war on the U.S. when Washington had no ambition to go to war with Beijing. General MacArthur was the man who saved China from Japan. And China’s leader at the time, Mao Zedong, killed far more Chinese than MacArthur ever did.

Yet one noteworthy aspect of The Battle at Lake Changjin may not receive as much attention.

The Korean War lasted between 1950 and 1953. America had recently come out of World War ii as the preeminent power in Asia, following the two atomic bombs dropped on Hiroshima and Nagasaki. U.S. troops were stationed everywhere from South Korea to Japan to the Philippines to Australia. America was the center of the free world. It was the economy that the rest of the capitalist world revolved around.

However, the Soviet Union also enjoyed a burst of energy following World War ii. Joseph Stalin took advantage of the crumbling empires of Germany and Japan to spread communism in both Europe and Asia.

A clash between communism and capitalism was bound to happen at some point. And the first shots of this “cold war” were, in many ways, fired in Korea.

America, to this time, had been unbeatable in its major wars. The Revolutionary War, the Mexican-American War, the U.S. Civil War, the Spanish-American War, World War i and World War ii were all victories. And with each victory, America’s power kept growing. During World War ii, it fought a war on two fronts (and two continents) and won. America was undefeated.

In the Korean War, America was defeated.

The Korean War was technically a stalemate, although South Korea’s independence was preserved. North Korea should have been an easy foe to smash. And it was. U.S. troops made it to the border with China. But once the Chinese intervened, the tide turned. Practically all the gains made by the U.S. troops were lost. The mighty American superpower that defeated Adolf Hitler’s panzers and Emperor Hirohito’s zeroes couldn’t stop Mao’s People’s Volunteer Army. And Gen. Douglas MacArthur, one of America’s greatest generals, ended his career on a low note.

Korea was only the first taste of decades of lost wars. The Bay of Pigs invasion of Cuba in 1961 was a fiasco. The Vietnam War ended with Saigon falling to Communist forces in 1975. The 1979–1981 Iran hostage crisis was a foreign-policy disaster. The humiliating retreat from Afghanistan this year shows that this trend has continued.

It’s as if America is cursed.

Herbert W. Armstrong, editor in chief of our predecessor magazine, the Plain Truth, proved in his free book The United States and Britain in Prophecy that America is descended from ancient Israel. This has everything to do with America’s history as an unmatchable military power.

God promised the patriarch Abraham that He would make of his progeny “a great nation” (Genesis 12:1-2). God told Abraham, “… I will bless thee, and make thy name great; and thou shalt be a blessing: And I will bless them that bless thee, and curse him that curseth thee …” (verses 2-3). Later, God promised the Israelites certain blessings if they kept His law. Those blessings included: “And ye shall chase your enemies, and they shall fall before you by the sword. And five of you shall chase an hundred, and an hundred of you shall put ten thousand to flight: and your enemies shall fall before you by the sword” (Leviticus 26:7-8). “And all people of the earth shall see that thou art called by the name of the Lord; and they shall be afraid of thee. … And the Lord shall make thee the head, and not the tail; and thou shalt be above only, and thou shalt not be beneath …” (Deuteronomy 28:10, 13).

God also promised Israel curses if they disobeyed His law: “And I will set my face against you, and ye shall be slain before your enemies: they that hate you shall reign over you; and ye shall flee when none pursueth you. … And I will break the pride of your power … And your strength shall be spent in vain …” (Leviticus 26:17, 19-20). “The Lord shall cause thee to be smitten before thine enemies: thou shalt go out one way against them, and flee seven ways before them …” (Deuteronomy 28:25).

Speaking of Israel, the Prophet Micah wrote that “all thine enemies shall be cut off” (Micah 5:9). Mr. Armstrong wrote in The United States and Britain in Prophecy: “They were cut off from the beginning of God’s birthright blessing on America and Britain starting about 1803, through the First World War, the Second World War, until the turning point of the Korean War at the end of 1950. Since that time, however, these blessings are surely being taken away—and neither America nor Britain has come out on top in any major skirmish since that time!”

America was a military superpower. But unlike almost every other superpower of history, America used its strength as a force for good in the world. World Wars i and ii were fought to preserve the freedom of the world. So was the Cold War. America sent so many of its sons abroad and spent billions of dollars to help other nations have what it had: freedom, prosperity and security. America was a blessing to the world.

Since the Korean War, and each subsequent lost war, other powers have been growing stronger and stronger. Powers like the People’s Republic of China. And their aims are far less altruistic.

The rise of countries like China herald what the Bible calls the “times of the Gentiles” (Luke 21:24). Luke 21 details what kind of place the world will be once countries like China call the shots: “For these be the days of vengeance …. [T]here shall be great distress in the land …. And they shall fall by the edge of the sword, and shall be led away captive into all nations …” (verses 22-24).

This is what makes The Battle at Lake Changjin important: It’s a giant announcement that the “times of Israel” are gone and the “times of the Gentiles” are moving in.

The movie is like a proclamation from Beijing: Israel has been cursed to military failure since the Korean War. We were the nation to inflict the first blow, and they haven’t stopped coming since. And this is worth celebrating. Move over, America; the 21st century belongs to countries like China.

And the fact that it’s 2021’s largest-grossing movie means that a lot of people—at least in China—are very excited about this.

This doesn’t bode well for the world.

To learn more, please read our Trends article “Why the Trumpet Watches America Has Won Its Last War.” Also please request a free copy of The United States and Britain in Prophecy to learn about America’s biblical heritage and what this means in the modern day.