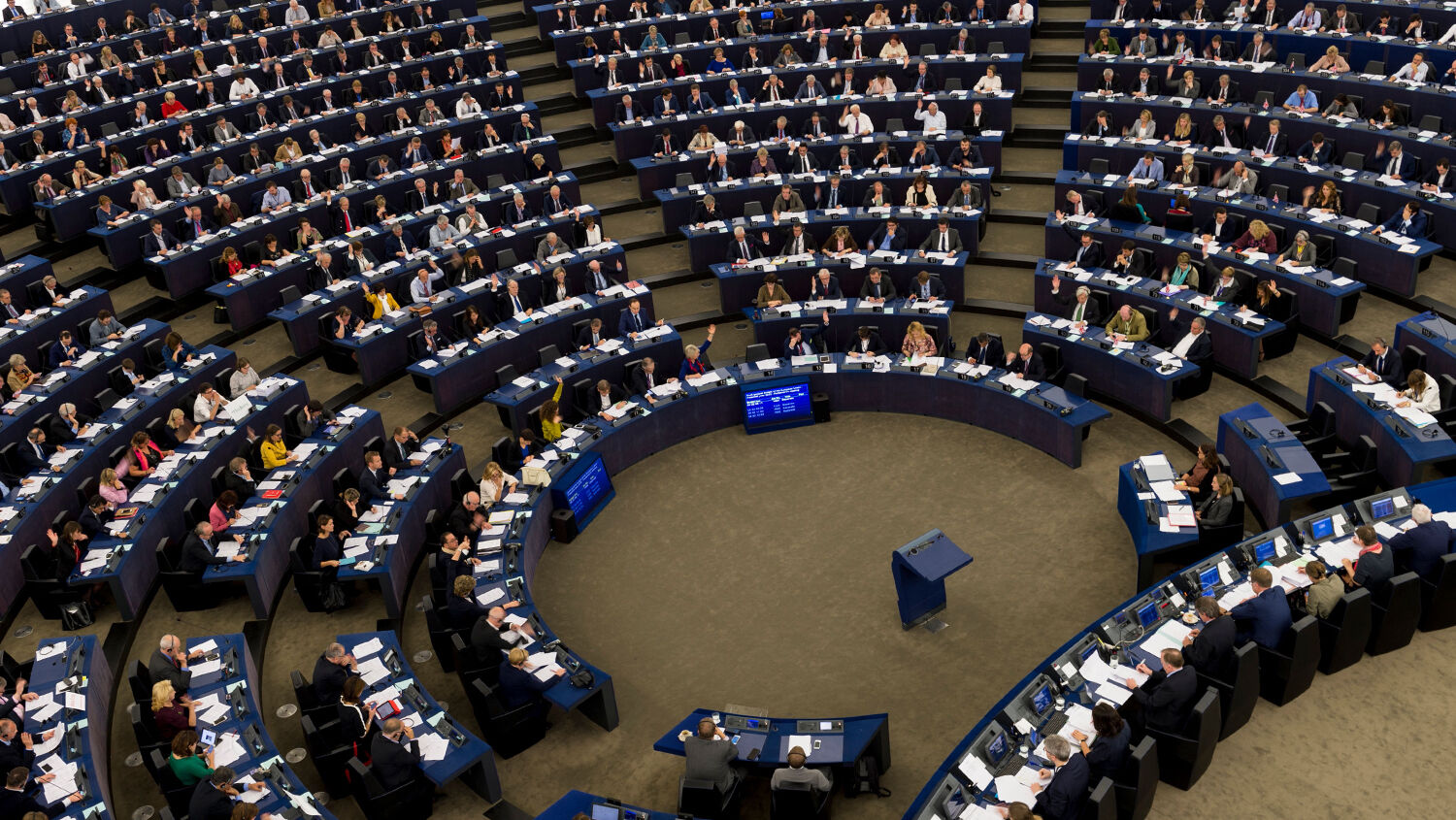 A key prophecy reveals how Europe will get its strongman.

Europe’s leadership is facing a deadlock. Just this month, Austrian Chancellor Sebastian Kurz announced his resignation until corruption charges against him are cleared. In the meantime, he is forced to rule as a shadow chancellor. In the Czech Republic, Prime Minister Andrej Babiš’s party lost its majority in the national election as a conglomerate of smaller parties united against him. Before that it was Germany’s September election that left the country, and consequently the European Union, without a strong leader.

Democracy, parliaments and coalitions seem to cripple Europe’s leadership. Where will it lead?

The Continent is forced to provide for its own security, economy and alliances. Yet at this crucial moment, Europe is acting like a chicken without a head.

European Union presidents have never been equipped with the power to make consequential decisions. EU nations have resisted giving up more of their sovereignty. Germany has been able to assert its will and lead the EU, but the process has been bureaucratic, burdensome and slow. Europeans have looked to Germany and, for the past 16 years, Chancellor Angela Merkel for leadership in crises like those with the euro and refugees. Now Merkel is departing politics, leaving Germany and Europe leaderless.

With each unsolved, worsening crisis, Europeans are becoming more and more willing to accept the unprecedented. Soon they will see only one way to escape the fate of being swallowed up by their crises: Give up individual and national autonomy and install a strong, overarching leader.

Crises are causing European leaders to only see dead ends. But one crisis is coming that will force a strongman to break forth.

Most recently, France has been upset by a new alliance between the United States, the United Kingdom and Australia (aukus) that voided a submarine deal between France and Australia. French Foreign Minister Jean-Yves Le Drian called it “a stab in the back.”

“France wants ‘European strategic autonomy’ and ‘European sovereignty,’ pet phrases of [French President Emmanuel] Macron, to become a reality,” the New York Times commented. “The case for a united Europe to chart its own course—after the submarine fiasco, after the Afghan mayhem, after President Donald J. Trump’s dismissiveness of Europe, after Brexit and in light of clear trans-Atlantic differences on China—could scarcely be stronger. For Le Drian, echoing Mr. Macron, it’s the only way for Europe to ‘remain part of history.’”

The chaotic withdrawal of the U.S. from Afghanistan has turned Europe’s fears into reality. Bloomberg noted, “Certainly it will infuse energy into the idea of a more muscular and independent military capability.”

But how can Europe “chart its own course” without a captain? How can it lead an independent foreign policy and command an EU army without a commander in chief? Will Europe put its trust in an inexperienced successor to Chancellor Merkel? Or will Germany and other nations trust France to lead them to war if crises escalate? They certainly won’t.

The late Otto von Habsburg once suggested a strategy of how governments should deal with national emergencies. In the April 1978 issue of his publication Zeitbühne, he outright suggested that in certain national emergencies, such as nuclear blackmail or major acts of terrorism, governments should let a strongman take over for a period of nine months. He would be equipped with the power to suspend laws and “take all measures necessary for the maintenance of the life of the population.”

A Europe-wide emergency would require the emergence of a leader with powers that transcend national borders.

The most powerful current European office is that of the president of the European Commission. Yet the person holding the office, former German Defense Minister Ursula von der Leyen, is pleading rather than leading. “Europe can—and clearly should—be able and willing to do more on its own,” she told the European Parliament in Strasbourg following the Afghanistan withdrawal. There is a “can” and a “should” but where is the will?

Von der Leyen joined France’s demand for a European defense union, but is she or anyone else on the scene able to build it and command it?

Looking to the Catholic Church

On the last weekend in August, Catholic lawmakers, government professionals, nongovernmental organizations and church leaders met in Rome to discuss, as Hungarian State Secretary Balázs Orbán posted on Facebook, “the great issues of the world and the possibilities of Christian politicking, in an uncertain world.”

Topics on the agenda included the persecution of Christians, the situation in Afghanistan, migration, digitalization and gender ideologies. Europe sees the increasing chaos and wants to bring back stability by joining forces with the millenniums-old Catholic Church and thus revive the heritage of the Holy Roman Empire.

Yet the Holy Roman Empire was based on an emperor and a pope that stood and fought for certain values. Europe united behind a cause and a leader. Today, Europe has neither.

Pope Francis is often seen as the antithesis to what conservatives in Europe crave. Meanwhile, the Catholic Church is plagued by scandals and debates for liberal reforms. Europe’s secular and religious leadership used to fight for dominance. Today it is more like they are fighting for survival. But this will change. And the trigger for that change may have already been pulled.

On September 30, the Biden administration in the U.S. signed legislation to avert a partial federal shutdown and provide government funding through December 3. But the crisis has not been averted. America has muddled through several debt crises in recent years, but each time, the debt grows and makes the eventual reckoning even worse and even more unavoidable. The recent crises may cause it all to blow up.

U.S. citizens fear growing inflation, a stock market crash and the government stopping Social Security or Medicaid payments. But U.S. financial woes could have even bigger consequences for the rest of the world.

Whether the U.S. keeps raising its debt ceiling or defaults, America’s financial woes are causing the rest of the world to lose trust in the dollar. Nations have been using dollars in international transactions for decades, and Europe is directly tied to the U.S. financial system. America’s lack of financial stability is therefore shaking European leaders to their core.

Even as the U.S. retires as global leader, Europe is conspicuously lacking in leaders and governments capable of handling the looming crisis. This will ultimately lead to radical changes in Europe. Watch for stronger European governments to set up a more independent financial system that excludes or takes advantage of weaker EU nations. The late editor in chief of the Plain Truth (predecessor to the Trumpet), Herbert W. Armstrong, predicted such an outcome decades ago. He wrote in 1984 that a massive banking crisis in America “could suddenly result in triggering European nations to unite as a new world power, larger than either the Soviet Union or the U.S.”

Guttenberg—the Leader They Will Call On?

One leader the Trumpet has watched for years has prepared himself for the time when Europe is forced to unite during a financial crisis: Karl-Theodor zu Guttenberg. He rose in German politics to become the economics minister, then defense minister, but he resigned in 2011 due to a doctoral plagiarism scandal. He chose the U.S. as his place of exile, in part because he wanted to understand the financial system better.

Guttenberg then founded the investment firm Spitzberg Partners in New York. Since 2014, he has also been an advisory board member for Ripple Labs, a global leader in cryptocurrency innovation. He recently mollified his doctoral scandal by receiving a doctorate from the British University of Southampton. The subject of his thesis was “an analytical reconsideration of the nature, scope and significance of correspondent banking and its application in historical precedence and selected case studies.”

More than most, Guttenberg has studied the history of the world’s global financial system and emerging new financial technologies. In the event of a financial crisis, could he play a role in causing certain economies to fall and others to rise?

In addition to his financial expertise, he also led German soldiers into Afghanistan and was the first German defense minister to openly call the conflict a war, acknowledging that Germany was at war again for the first time since its Nazi forces were defeated in World War ii. To this day, many in the military long for his return to politics.

Furthermore, Guttenberg is well connected with European leaders, has an aristocratic heritage and background, maintains high-level business and personal connections around the world, and harbors a strong desire to defend Europe’s Catholic heritage. As if this were not enough, he also sits on the Futures Board of the Human Vaccine Project that seeks to decode the human immune system, cure diseases and prepare for the next pandemic. When crises culminate, will he be the man Europeans rally behind?

In the December 1991 Trumpet, editor in chief Gerald Flurry asked: “If a real crisis develops, will the Germans call for a new führer? Your Bible says that is going to happen! That crisis will probably be triggered by an economic collapse in the U.S.” In 2015, he wrote an article titled “How the Global Financial Crisis Will Produce Europe’s 10 Kings.” The rise of a strong German leader and the reduction of the EU to 10 nations, or groups of nations, are forecasts the Trumpet has maintained from the beginning and that Mr. Armstrong maintained for decades prior.

Mr. Flurry and Mr. Armstrong based their prophecies on key Bible passages. You need to read these prophecies in detail to understand world events and where they are leading.

The Bible prophesies in Revelation 17 that 10 kings will rise to lead Europe and will unite under one overarching leader. This unified empire will conquer and terrorize much of the world in a conflict that far surpasses even the world wars. The Apostle John saw this empire in a vision symbolized by a beast, with 10 horns. “And the ten horns which thou sawest are ten kings, which have received no kingdom as yet; but receive power as kings one hour with the beast. These have one mind, and shall give their power and strength unto the beast” (verses 12-13).

This prophecy is explained in detail in Mr. Flurry’s cover story for our latest Trumpet issue: “Europe Is About to Be Hijacked.” His article puts recent events in the context of the big prophetic overview.

The very next verse in Revelation 17 shows that this prophecy is to be fulfilled right before Jesus Christ’s Second Coming. Yet almost no one in the so-called Christian world understands this prophecy or watches for its fulfillment. Yet Christ instructed His disciples to watch and pray always (Luke 21:36).

God commanded ancient Israel to be an example for the world to lead the world to Him—but it failed. As Mr. Armstrong explained in The United States and Britain in Prophecy, the English-speaking peoples today are the modern descendants of ancient Israel. They received unmatched blessings but abysmally failed to uphold God’s law. God prophesied in amazing detail that He would punish them and mankind as a whole. Yet like a loving father disciplining his children, there is a purpose for this punishment: God will use it to bring people from all nations to repentance and obedience to His just, life-giving, wonderful law and way of life.