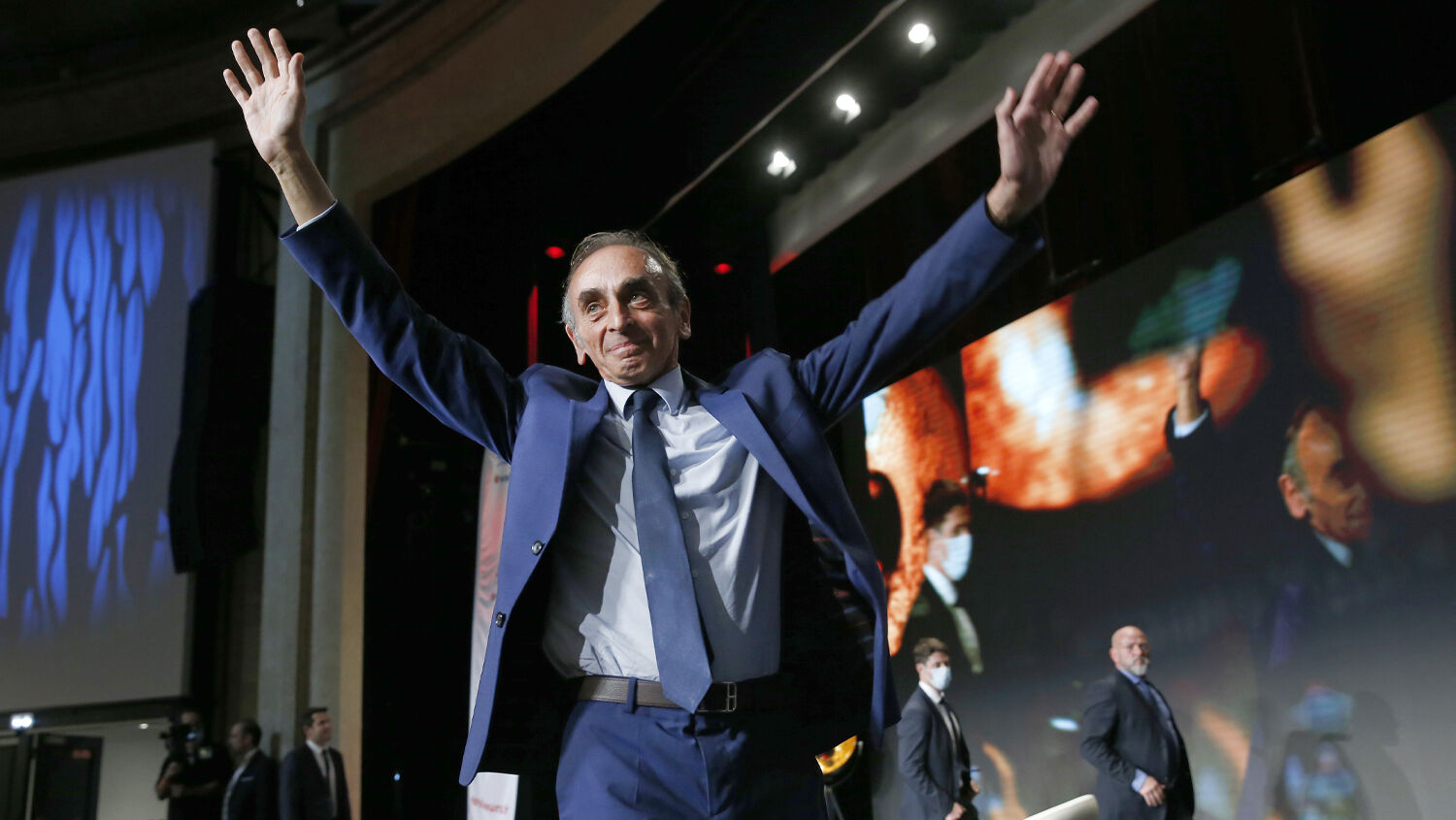 Events in France today show that more and more people are ready to engage in conflict to safeguard their Continent and their history.

French philosopher Éric Zemmour is polarizing France with his anti-Islam, right-wing rhetoric and is believed to have a good chance of winning the next presidential election if he chooses to run. Zemmour, a famous television personality and book author, is rallying millions behind his ideas. A recent Harris poll put him at 17 percent popularity, ahead of Marine Le Pen of the far-right National Rally and just behind incumbent Emmanuel Macron.

Though Zemmour has not announced his bid for the presidency, “Zemmour 2022” T-shirts are already being sold and chants, such as, “Zemmour! Président!” can be heard on his book promotion tour. The Spectator noted: “He has a devoted and surprisingly professional campaign behind him, the nucleus of a political party, conceived with a clear mission: to restore la gloire de la France. His new book has the faintly ridiculous title La France n’a pas dit son dernier mot (France Has Not Said Its Final Word) and has already sold more than 150,000 copies. He’s insanely popular.”

Popularity of course is a key to win a fair election. But what makes Zemmour’s rise interesting is why he draws so much support. In France’s last election, Le Pen attempted a more moderate campaign in an effort to beat Macron. Zemmour is going the other direction, using patriotic, anti-Islam rhetoric with incredible success.

As an author and tv host, Zemmour gives the impression of being educated and mainstream. He often speaks directly to the French people on CNews, France’s second-most watched news network. His 63 years of experience add to his credibility, as does his eloquence and knowledge. What’s more, his racial background provides him near immunity from criticism. “Bernard-Henri Lévy, another flamboyant public intello, has accused him of being a Jewish anti-Semite,” wrote the Spectator. “The truth is, Zemmour, the son of Algerian immigrants, says lots of things Lévy has said about Islam over the years, just more forcefully. He also says what a lot of French people know to be right: France has failed to assimilate large parts of its Muslim population and that is a problem.”

Many in France realize that the nation’s large Muslim population and corresponding terrorist threat provide a challenge France simply cannot handle. Project Syndicate notes that Zemmour advocates some of the same solutions as Charles de Gaulle: national independence, social policy, and the idea of a Christian France.

Zemmour’s defense of a Christian Europe is rooted in French tradition, but he has issues with the current pope. On CNews in 2020, Zemmour accused Pope Francis of siding with “the enemies of Europe.” He said: “We had two great popes, John Paul ii and Pope Benedict xvi. One was Polish, the other German, deeply European, deeply rooted in their national identities who believed in nations, who believed in European nations in particular. So here we have a guy who comes from South America, who despises Europe, who obviously, as far as I know, hates France. In particular, he despises Europe, and then delivers a universalist discourse like a nongovernmental organization.”

Francis, he claimed, is a “post-Catholic pope” and “Catholics aren’t obliged to obey him.”

This isn’t the only polarizing topic Zemmour speaks out on.

Macron is known for spearheading anti-American rhetoric in the European Union. Zemmour likes to take it a step further. Near the beaches of the 1944 D-Day landing, where soldiers shed their blood to defeat Nazism, he said: “The landing was at once a liberation of the national territory and at the same time an occupation and colonization by the Americans.”

His view on France’s Nazi collaborators also differs from the historically established reality. Zemmour said in a CNews segment that French collaborators did the best they could to protect French Jewish lives by only giving up foreign Jews to the Nazi regime. As the New York Times wrote, this is just “one of several remarks suggesting that the wartime government of Marshal Philippe Pétain that sent more than 72,500 Jews to their deaths was not so bad after all.”

With this mixture of anti-American, anti-immigration and pro-Nazi collaborators rhetoric, Zemmour stands in opposition to Macron. Regardless of whether Zemmour runs for president, it is significant that millions in France are willing to vote for far-right leaders, like Le Pen and Zemmour. France as a whole is shifting to the right. The Spectator concluded:

Zemmour is shrewd. He spies an opportunity to offer a new “third way” for the right. He can mix populist rhetoric about immigration and Macron’s ghastly vaccine passports with detailed plans for health-care reform and a new corporate tax system.

He remains a wild insurgent and a very long shot for the presidency. He may just end up being another vote-splitter on the right. His campaign could have problems financing itself. Even if he manages to gazump Le Pen, eviscerate Les Républicains and finish in the top two in the first round of the election on 10 April, he will struggle to overcome Macron, who despite his unpopularity still has the advantages of the incumbency. But the prospect of those two dynamic, combative and eloquent politicians squaring off in televised debates is an exciting one. In the big discussion about what it means … to be French, [Zemmour] may have the final word.

France has a strong appetite for radical politics that doesn’t shy away from confronting the liberal trends sweeping through Europe. Macron will either need to shift further to the right or lose his presidency. Either way, French politics will become more right wing. It is becoming increasingly clear that France wants a leader that preserves France’s culture and identity.

In April, French retired generals urged Macron to act against Islam and threatened military coup if no action followed. The letter was signed by 20 former generals and more than 1,500 members of the military, police and gendarmerie. It called on France’s leaders to “safeguard the nation” from Islamic threats and to preserve France’s history. Many fear that the days of Christian Europe are numbered and that the Continent will succumb to Islam. But if you look at history, it’s apparent that this current trend may have a completely different outcome.

There is reason why those on the far right talk about Muslim invasions: They happened in Europe’s history. One of the most famous examples came in the eighth century, when Charles Martel, Charlemagne’s grandfather, led Europeans to defeat an Islamic invasion. Historian Edward Gibbon portrayed Martel as the savior of Christian Europe, writing that, without him, “the interpretation of the Koran would now be taught in the schools of Oxford.” For those who fear a Muslim takeover today, the solution may be another Charles Martel. And indeed, the Bible reveals that a violent conflict is looming.

This prophecy “describes a time when Germany’s Catholic empire will wage all-out war, throwing everything it has at radical Islam—and dominating it like a violent flood pouring in!” Mr. Flurry explained. Just a few years ago this would have seemed unthinkable. But more and more in Europe are willing to fight to preserve the Continent’s culture.

Request free copies of Gerald Flurry’s booklets The King of the South and Jerusalem in Prophecy to understand how current rhetoric will suddenly transform into action.