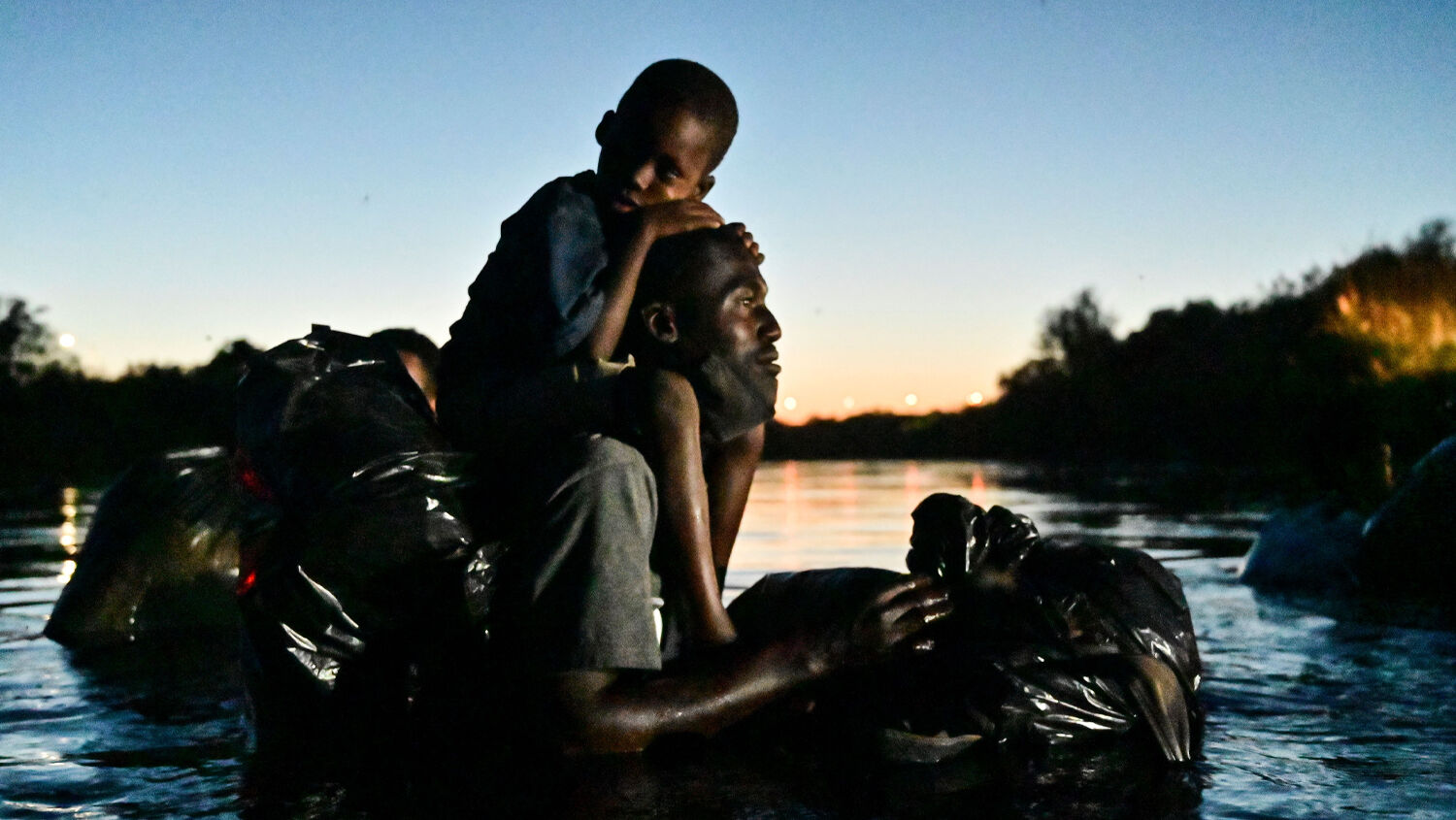 A man carries a child on his shoulders as Haitian migrants cross the Rio Grande between Ciudad Acuna, Coahuila state, Mexico, and Del Rio, Texas.
PEDRO PARDO/AFP via Getty Images

More people are realizing unchecked immigration is a nation-destroying problem.

Joe Biden’s border crisis is sowing the seeds of disaster. Border patrol apprehended more than 1.7 million illegal aliens along the United States-Mexico border during the fiscal year that ended on September 30. That is as many people as live in Phoenix, Arizona, (the nation’s fifth-largest city) and the highest number of apprehensions in American history. The previous record was set in 1986 when 1.69 million illegal aliens were apprehended nationwide before President Ronald Reagan enacted sweeping reforms to tighten up border security and penalize employers who hired illegal aliens.

Biden promised that he would undo the strict border security measures put in place by President Donald Trump. Illegal border crossings began skyrocketing after he took the oath of office. Almost 7,000 illegal aliens are now crossing into the U.S. each day, and all Biden has done about it is promise to punish patrol agents who treat illegal aliens too harshly and send in the military to transport illegal aliens to various cities and towns across the U.S. In fact, Jill Biden recently endorsed El Centro Academy for Children, a private school run by a Democratic donor (Irene Caudillo) whose organization has posted tips on how illegal aliens can avoid arrest while inside America.

Another 200,000 illegal aliens will cross into America next month, but Biden’s new pick to lead U.S. Customs and Border Protection admits he has no “ready-to-go plan” to solve the crisis.

In April, Donald Trump told Fox News host Sean Hannity the border crisis “is a horrible situation that could destroy our country,” and many former and current government officials agree with him.

Mark Morgan—who served as acting commissioner of U.S. Customs and Border Protection from July 5, 2019, to January 20, 2021—recently wrote an editorial for the speech digest of Hillsdale College warning that the border is a disaster. “In just a few short months, the Biden administration has created a disaster on the southern border of the United States,” he said. “It did so by methodically—and by all indications intentionally—undoing every meaningful border security measure that had been in place. … I’ve served in federal law enforcement in various capacities for more than 35 years, under six different administrations. And while I’ve become numb to the spin and misdirection that is commonplace in Washington, I have never seen as blatant a disinformation campaign as this one.”

Morgan elaborated on how Biden is making it easier for drugs and criminals to infiltrate our society. Just this year, Border Patrol has arrested 8,000 criminal aliens—including 46 murderers, 393 sex offenders and 880 assailants. It has also arrested several members of MS-13, the most violent transnational gang in America, and two Yemeni nationals in the U.S. Terrorist Screening Database.

In addition to these criminals, many of the illegal aliens crossing America’s southern border may be Marxist revolutionaries fleeing political violence in Central America. Nicaraguan President Daniel Ortega’s brutal crackdown on political dissent has fueled a new wave of Central American immigrants fleeing for the United States. Yet even though President Ortega is a former Marxist guerrilla leader himself, so are some of his fiercest opponents. This means there could well be thousands of Sandinistas moving into the United States and spreading their radical ideology.

The whole situation is reminiscent of the state of affairs that one perceptive columnist, Georgie Anne Geyer, described in an editorial published in 1984: “The United States has about five years left before the population imbalance in the entire Southwest will be so tilted toward the illegal aliens that there will be no possibility of passing any legislation at all. … Within 20 years, this illegal community will begin organizing politically, demanding rights even as they refuse to become citizens. … They will be led by self-styled caudillos and gangs. The rule of law will pass with the idea of American citizenship. If the Marxist civil wars in Central America are not contained, we will see a hemorrhage of Central Americans, many of them carrying with them extremist, Marxist and irredentist ideologies.”

President Ronald Reagan’s reforms delayed some of the serious problems Geyer predicted, but the Biden administration has made things worse than they were in Reagan’s day. If unvetted immigrants keep pouring into the U.S. at the current rate, we may soon see Marxist civil wars in U.S. cities.

The late Herbert W. Armstrong explained in The United States and Britain in Prophecy that the Anglo-Saxons who settled the U.S. and Britain descended from the lost tribes of Israel. This astonishing truth means that the Bible’s prophecies about Israel are directed largely at America and Britain.

Isaiah 1:7 says, “Your country lies desolate, your cities are burned with fire; in your very presence aliens devour your land; it is desolate, as overthrown by aliens” (Revised Standard Version). God is specific in this verse: Because the American people have turned away from His law, their “cities are burned with fire” and are “overthrown by aliens” in their midst. For years, the Western Hemisphere has been plagued by violent Latin American cartels that move drugs northward into the United States in return for cash profits and military-style weapons. Now the Biden administration is doing everything it can to help these illegal aliens move throughout the entire nation.

For information on what the Bible says about the dangers of out-of-control immigration in end-time America, please read “Joe Biden’s Border Catastrophe,” by Trumpet executive editor Stephen Flurry, and “Where America’s Race Riots Are Leading,” by Trumpet editor in chief Gerald Flurry.