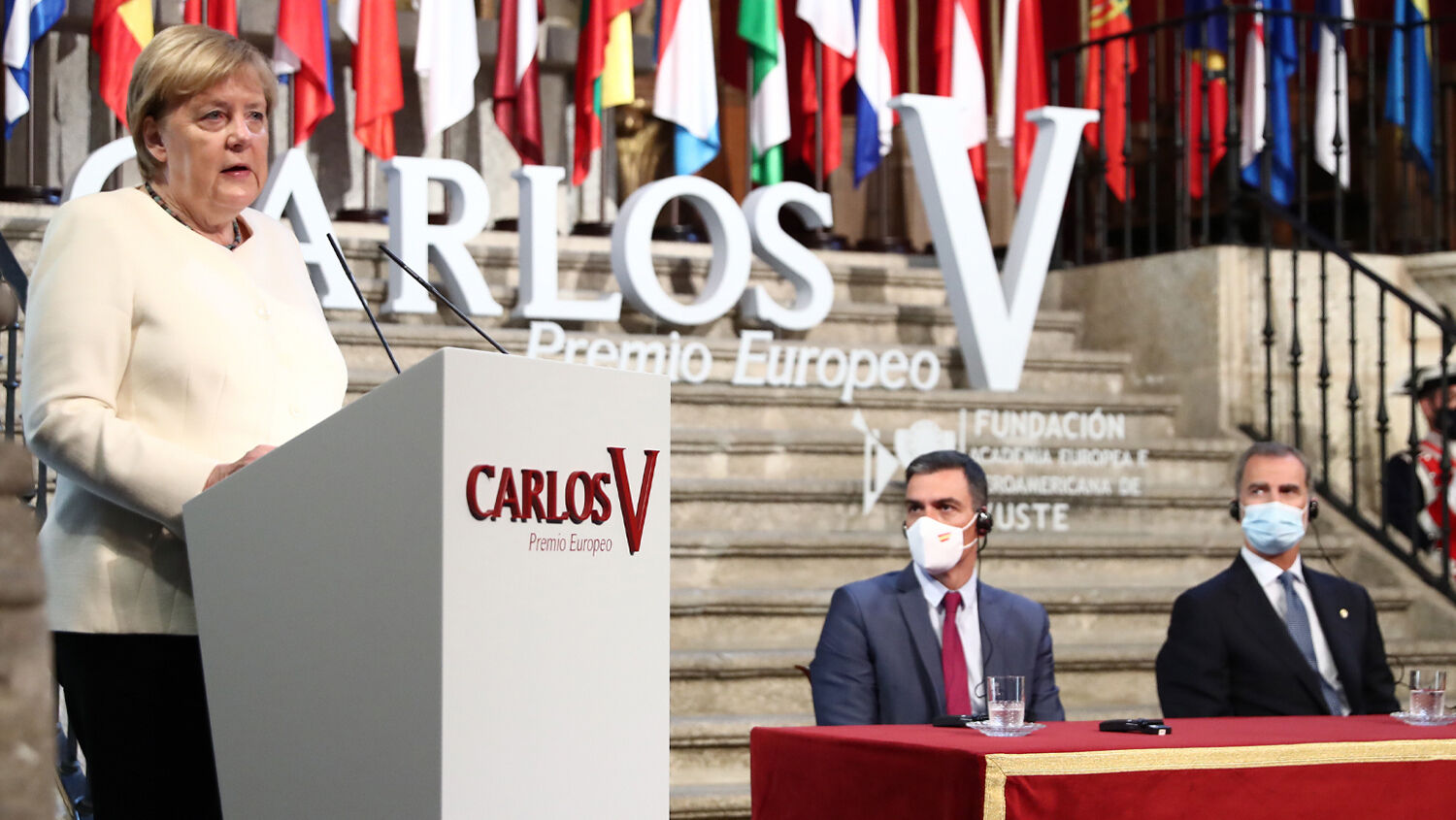 How desperately we need to understand history

German Chancellor Angela Merkel was awarded this year’s Charles v European Prize by Spanish King Felipe vi on October 14. Merkel received the award for being an “unwavering champion of the European integration process and the important strategic role of Europe.” In her acceptance speech, Merkel said: “Europe is only as strong as it is united.” King Felipe praised the outgoing chancellor as a politician who “embodies the spirit of Europe” like few others. Merkel also highlighted the good cooperation she has had with Spanish President Pedro Sánchez, who “sought close ranks with Germany in joint migration policy as well as in dealing with the consequences of the pandemic,” faz.net noted (Trumpet translation throughout).

Together, the Spanish representatives and Chancellor Merkel were reminded of the contribution Emperor Charles v made to the European continent. Merkel was awarded the prize in the very monastery that Charles v withdrew to die in, in 1588. Both the location and namesake are fitting to emphasize European unity. But while Charles v did reign over a united Europe, the late Holy Roman emperor is also famous for his contribution to the Inquisition, the torture and killing of many who denied the Catholic faith.

Charles v (1519–1556) succeeded his grandfather Maximilian i and led the Habsburg dynasty to greatness. Notice what theTrumpet.com managing editor Brad Macdonald writes about his vast empire in The Holy Roman Empire in Prophecy:

At age 19, Charles became ruler over Spanish and German dominions, including Germany, Burgundy, Italy and Spain, along with sizable overseas possessions. His kingdom became known as “the empire on which the sun never sets.”

During the reign of Charles v, the fourth resurrection of the Holy Roman Empire reached its apex. Not since the days of Charlemagne had a holy Roman emperor ruled over such an immense territory.

Early on, Charles swore to defend the Catholic Church. In his conquests, he brutally converted many in Latin America to Catholicism and pushed back a Muslim invasion. But his greatest challenge came with the Protestant Reformation, which divided Christian Europe. He ordered the killing of “heretics” and advanced the Inquisition. Macdonald continues:

Although the Spanish Inquisition was started by his grandparents, Ferdinand and Isabella, Charles took it to new levels. He became a deadly weapon of the Catholic Church.

At first, the Inquisition forced the conversion of Jews and Muslims. All Jews were expelled from Spain in 1492. …

As Protestantism swept through Europe, heretics were brutally tortured until they denied their faith or lost their lives. But the reformers grew stronger and formed military alliances to fight back. The religious conflict culminated in the Thirty Years’ War (1618–1648).

In his 1871 book, The History of Romanism, John Dowling wrote: “From the birth of popery … it is estimated by careful and credible historians that more than 50 millions of the human family have been slaughtered for the crime of heresy by popish persecutors …” (emphasis added throughout). Halley’s Bible Handbook corroborates this figure: “Historians estimate that, in the Middle Ages and Early Reformation era, more than 50 million martyrs perished.”

“The world has probably never seen a more vile period than those dark and miserable years of the 14th, 15th and 16th centuries,” Trumpet executive editor Stephen Flurry wrote in Germany and the Holy Roman Empire.

Europeans love and cherish their history, naming prestigious awards after some of that history’s most influential personalities. Yet as the life of Charles v shows, leaders of the Holy Roman Empire were guided by the Catholic Church and led with violence! The Bible reveals that we have not seen the last of this evil Holy Roman Empire. “The beast that thou sawest was, and is not; and shall ascend out of the bottomless pit, and go into perdition: and they that dwell on the earth shall wonder, whose names were not written in the book of life from the foundation of the world, when they behold the beast that was, and is not, and yet is” (Revelation 17:8).

Verse 1 warns that the beast of Revelation 17 is ridden by a woman—symbolic for the Catholic Church’s influence over the Holy Roman Empire. While worldly powers have risen and vanished, it was this spiritual institution that resurrected the empire again and again. Prophecy reveals that this empire will rise one more time, and Europe’s veneration of this history is one of many signs that this prophecy is about to be fulfilled. It is therefore imperative to understand both the history and prophecy of this evil empire. Read our free book The Holy Roman Empire in Prophecy for in-depth detail.