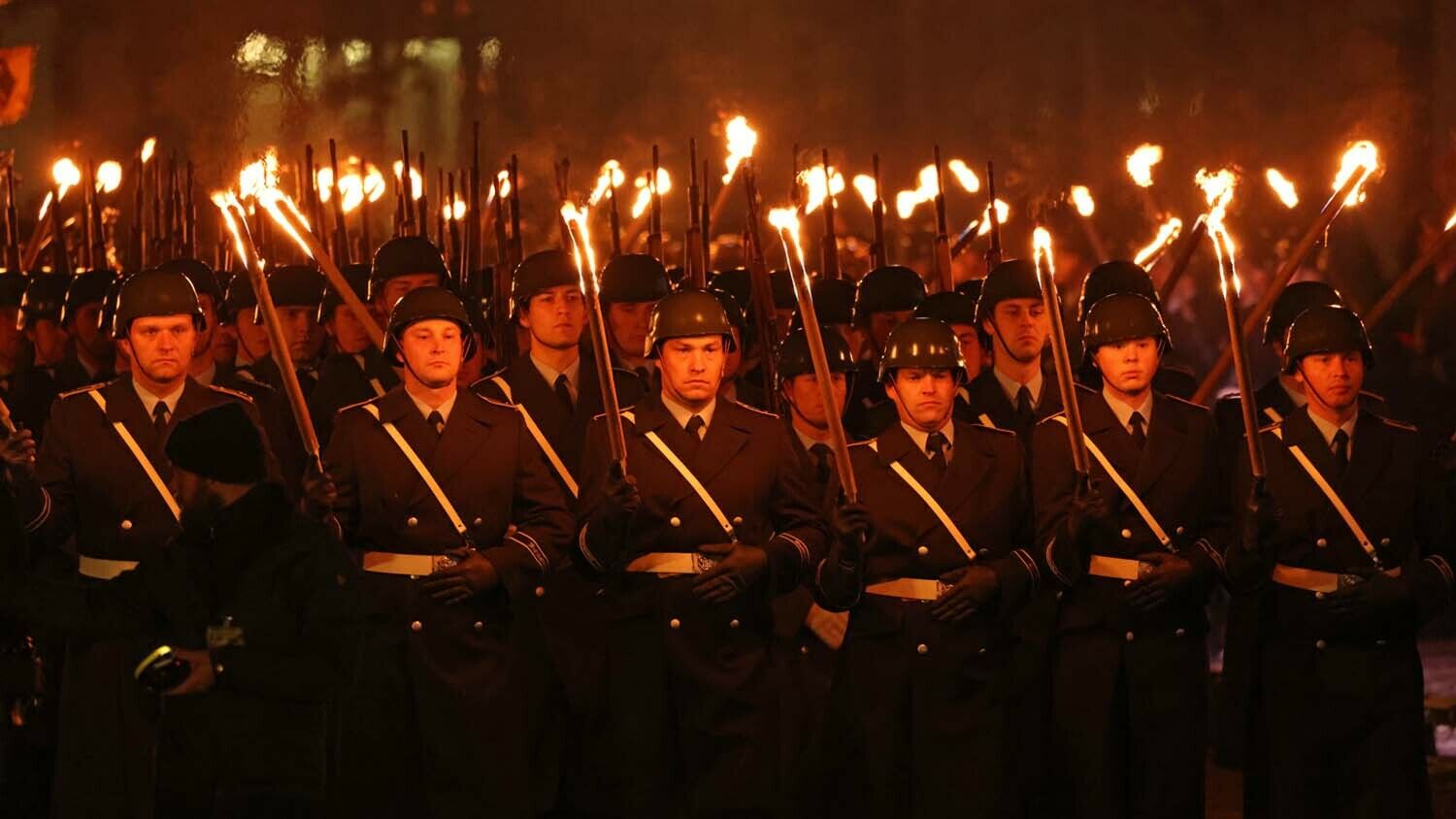 Soldiers of the Bundeswehr bear torches as they arrive in front of the Reichstag for an evening taps ceremony to honor veterans of Germany’s 20-year military mission in Afghanistan on October 13 in Berlin, Germany.
Sean Gallup/Getty Images

The German military honored the 90,000 German soldiers who served in Afghanistan with a parade on October 14 modeled after those of the German Reich and Adolf Hitler’s Nazi regime. The soldiers were carrying torches and wearing steel helmets reminiscent of the World War ii era. Many in German media and politics said the procession was appropriate and any criticism against it was doing the country a disservice. The overall message was: Nothing to see here; move on.

The world has moved on, and the profound meaning of what happened has been overlooked. But ignoring such dangerous warning signs will prove fatal.

While torchlit parades have occurred in postwar Germany at ceremonies for departing chancellors, presidents and defense ministers, this time the military was on parade to honor their fellow soldiers, and they did so in front of the Reichstag with a high level of publicity. “For some, the visual parallels to a Nazi march at the Brandenburg Gate in 1933 made the parade too historically insensitive,” wrote the Local. “Thousands of Twitter users posted with hashtags such as #Wehrmacht and #Ritual in which they said that the parade was not suitable for the modern age.” Torches were a popular expression of German dominance during the Nazi era.

Yet German politicians and media outlets were quick to defend the parade. In “A Small Piece of Recognition for People Who Fought,” Welt wrote: “The Afghanistan veterans were honored with a big military tattoo. People who smell fascism every time they see a steel helmet shouted ‘scandal.’ It wasn’t. The scandal is the hard-heartedness of these critics.”

“Ceremonial was absolutely appropriate in form, dignity and in the only right place (parliamentary army in front of parliament),” commented Marie-Agnes Strack-Zimmermann from the Free Democrats.

The German Defense Ministry tweeted: “Debate is necessary and important. Comparisons with Germany’s darkest chapter disappoint us. The Bundeswehr is a parliamentary army. As such, it has its place in the midst of society—on special occasions also in front of the Reichstag building.”

In other words, let history be forgotten; just let Germany be Germany.

But should we so quickly ignore these warning signs? Germany is again plagued by anti-Semitism and far-right extremism, of which its military is a proven hotbed for.

Ten years after the fall of the Berlin Wall, in 1999, the German capital and government moved from Bonn to Berlin. The Reichstag again became the seat of the German government just after the Luftwaffe went to war in Yugoslavia for the first time since World War ii. Addressing members of parliament for the first time in the new chamber, then Chancellor Gerhard Schröder said: “Equating Reichstag with ‘reich’ makes no sense. Our democracy and our parliament are strong and stable.” There had been demands that the word “reich,” meaning empire, should be replaced with a more modern term that reflects reality. Those demands were rejected.

The Reichstag has always symbolized Germany’s desire to form a strong empire—from the time of Kaiser to Hitler to today. Never has that desire manifested itself as strongly as under Adolf Hitler. In 1933, the Reichstag fire led to the rise of Hitler’s dictatorship. From the Reichstag, he ordered the suppression of Jews and his desire for world conquest.

In just a few weeks, we will be remembering Reichskristallnacht, “the Night of Broken Glass.” On November 9 and 10 in 1938, Jewish businesses were looted and buildings and synagogues were burned. Can one be blamed for recalling such images when seeing German soldiers march with torches at night in front of a building that retains its name from the Nazi period?

The symbolic imagery that we saw on October 15 should not be downplayed and forgotten. Instead it should serve as a strong warning.

The late theologian and author Herbert W. Armstrong warned that mankind has been lulled to sleep by modern education and its media, and it has thus failed to see the true significance behind world events. In The United States and Britain in Prophecy, he wrote: “Is it too late? Have our leaders become so steeped in a deceptive false education, so stultified that they cannot be aroused from slumber? God help us now! Time is fast closing in on us!”

If we ignore the obvious warning signs, we can’t escape the terrible times ahead. Mr. Armstrong explained that world events will pass by without us recognizing the true significance unless we understand Bible prophecy. I urge you to request a free copy of Germany and the Holy Roman Empire to learn where Germany’s desire for empire is leading.