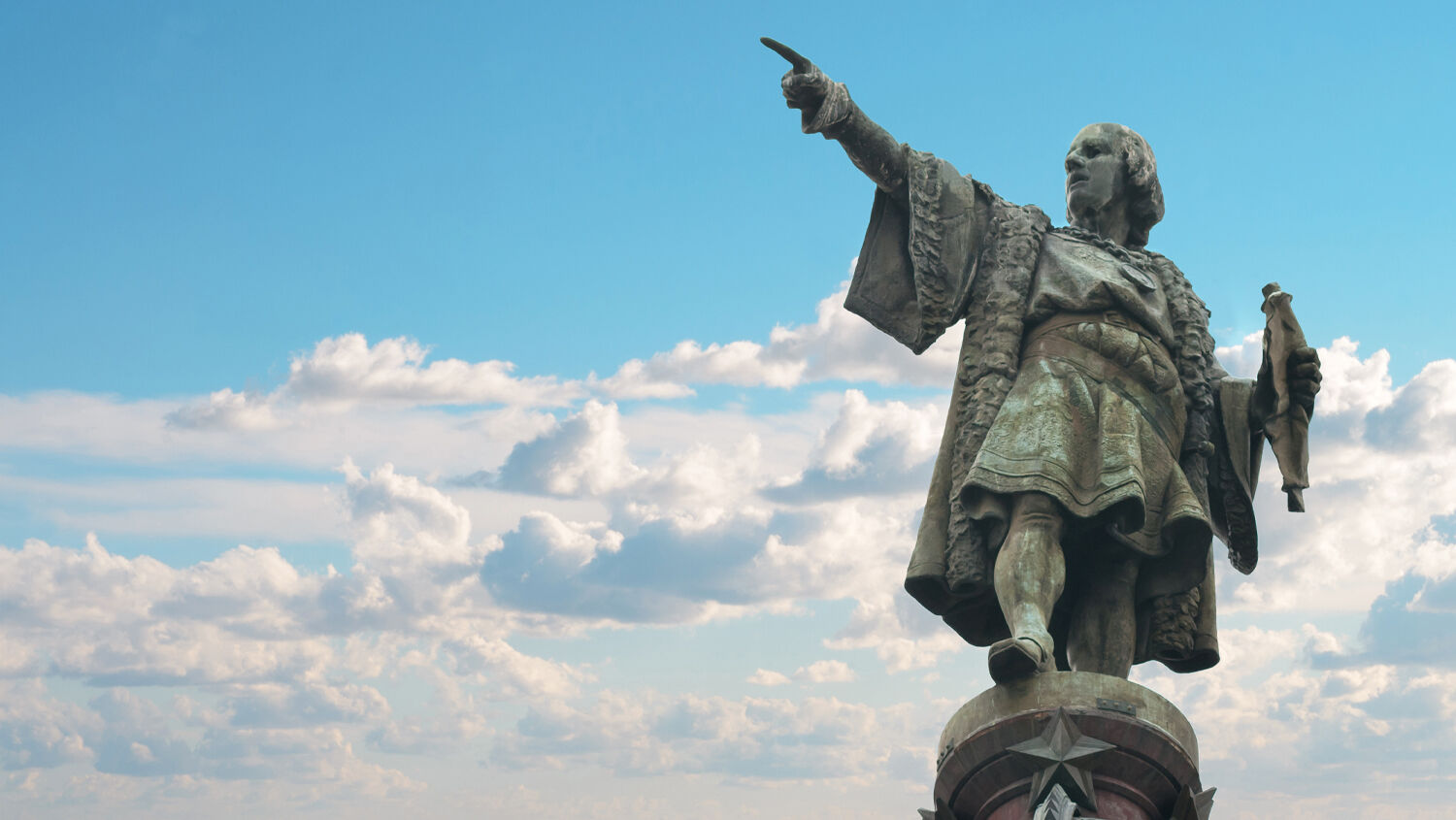 Harris said during her speech: “Since 1934, every October the United States has recognized the voyage of the European explorers who first landed on the shores of the Americas. But that is not the whole story. That has never been the whole story. Those explorers ushered in a wave of devastation for tribal nations—perpetrating violence, stealing land, and spreading disease …. We must not shy away from this shameful past, and we must shed light on it and do everything we can to address the impact of the past on native communities today.”

Columbus Day is being transformed into a day to apologize for alleged genocide and racism. The LA Times published an opinion piece that claims Christopher Columbus viewed the native tribes in an anti-Islamic light, tying Columbus Day to Islamophobia.

The radical-left’s rebranding of Columbus Day as Indigenous Peoples’ Day is another step in the Communist cultural revolution of America. What is the real motive behind canceling Columbus Day?

This has less to do with Christopher Columbus and more to do with attacking the truths of the Bible.

The ‘Discovery’ of the New World

Christopher Columbus, born in Genoa, Italy, in 1451, moved to Spain in 1485. Columbus first went to sea as a teenager, and he traveled throughout the Mediterranean, Aegean, and the coasts of Africa. Columbus was in his 30s when he first conceived the idea to travel across the Atlantic. His goal was to find a shortcut to China and Japan, since the eastward routes were dominated by Islamic enemies. After being rebuffed by Portugal, Genoa and Venice, Columbus won approval for his voyage from King Ferdinand ii and Queen Isabella of Spain in 1492.

In August 1492, Columbus departed Spain aboard the Santa Maria, accompanied by two other ships, the Pinta and the Niña. After a 36-day voyage, on October 12, Columbus landed on the present-day Bahamas. Columbus and his men then traveled the rest of the Caribbean, making contact with the natives living on the islands. Little is known about the voyage due to no firsthand accounts being recorded other than a letter Columbus wrote to the Spanish monarchy, which now resides in the Vatican Archives.

This is the moment celebrated as Columbus Day. The voyage of the Santa Maria was not the discovery of the Americas, but rather the rediscovery of the continent. Leif Erikson, among other explorers and cultures (some even before the life of Jesus Christ), had already landed in the New World. But during the Dark Ages, when the Roman Catholic Church dominated Europe, knowledge had been lost. The Renaissance and Scientific Revolution helped recover some of that knowledge.

The voyage of the Santa Maria was the moment that began the movement of European civilization to the new world. Columbus rediscovered the presence of the Americas at the moment Europe was ascending as a world power.

Columbus Day was first created in 1892 by U.S. President Benjamin Harrison to win over Italian-American voters whose communities had suffered violence. Throughout American history, Columbus Day has been about Italian-Americans celebrating their contribution to the republic’s story. Since they were mainly Catholic and were outnumbered in Protestant America, Columbus became a figure they could rally around. In reality, an attack against Columbus Day is an attack against Catholic-Italian heritage, not white supremacy.

According to PJ Media, Berkeley and Santa Cruz, two radical-left university centers, first renamed Columbus Day as Indigenous Peoples’ Day in 1992. That began the modern narrative that Columbus Day is about white Europeans stealing land and committing crimes against indigenous tribes. This narrative is always accompanied with the idea that North and South America were peaceful utopia’s before the Europeans arrived. Is that a fact or left-wing fantasy?

Hymie Rubenstein wrote in C2C Journal in the article “The Myth of Indigenous Utopia”:

As much as mainstream history and traditional anthropology have shown these five phenomena to be near universal features of the human condition, they are mostly portrayed these days in the ivory tower, government and media as late 15th-century European colonizer inventions to subjugate, exploit or exterminate the indigenous people of the world.

This is exactly the position taken by Kamala Harris. Although history shows that violence, war and greed are the state of human nature, the radical-left elite would have you believe they are exclusive to the white Europeans who came to America.

“In Canada, this skewed portrait of the five sins of Westernization portrays the pre-contact New World as a veritable Garden of Eden inhabited by a myriad of aboriginal groups mostly living peacefully with each other and in harmony with nature,” Rubenstein continued. “The indigenous ‘fall from grace,’ if any, was precipitated entirely by the arrival of Europeans.”

Scholars in Canada and the United States have promoted the idea that indigenous culture and ideas are superior to our current civilization because they lived peacefully and were “in harmony with nature.” But what was North and South America like before the Europeans arrived?

Mesoamerica was dominated by the Aztecs and Incas who were literate cultures. North America was fractured into thousands of tribal territories, overlapping with one another and constantly at war. John Keegan wrote in A History of Warfare: “There is a cruelty in the warfare of some pre-Columbian peoples of North and Central America that has no parallel elsewhere in the world.”

We know that the Mesoamerican tribes, especially the Aztecs, were a violent, imperialistic empire. The massive temples built in Tenochtitlan and other cities were used for human sacrifices. The Aztecs were known cannibals, eating members of enemy tribes as they conquered them. In fact, the Aztecs were constantly waging war in order to supply human sacrifices for their death cult. Keegan explained: “Aztec battles might yield thousands of captives, if conquest followed victory; after the suppression of one revolt by a subject people, the Huaxtecs, perhaps 20,000 were brought to the capital, to be sacrificed in dedication to the new pyramid temple, having their hearts torn out when they climbed to its summit.”

The Incas and Mayans preferred to enslave their captives, only sacrificing noble enemies. Cruelty and cannibalism were not limited to the Aztecs. The tribes of North America also had violent rituals. The Plains tribes, such as the Pawnee, would capture beautiful enemy women and sacrifice them to the morning star. The Huron would force their captors to run a gauntlet inside a locked lodge where they would stab, burn and break the bones of the captive. Eventually the Huron would burn the captive alive with red-hot axe heads, dividing the body later to be cannibalized.

The Iroquois and Blackfoot were especially warlike, much like the Apache. Other tribes were more peaceful and trade based, but still fought ferociously for their territory. What is clear from archaeological evidence and firsthand accounts from Jesuits and other missionaries in the 16th century is that indigenous North America was full of racism between the tribes, wars, slavery of captured peoples, and unspeakable atrocities.

In other words, the indigenous societies during this period were the same as any other society of mankind: There was greed, racism, war and violence. Europeans did wage war, commit crimes and made terrible mistakes in the Americas. But they also brought law, order, industrialism and education, which paved the way for unparalleled prosperity in North America.

The Real Cause of Human Evil

The modern narrative is really attacking two vital Bible truths. The first is the truth that the United States and British peoples are the descendants of the biblical nations of Israel. The British Empire and the American superpower were the fulfillment of promises given to Abraham. (Please read Herbert W. Armstrong’s book The United States and Britain in Prophecy to prove this truth for yourself.)

Canceling Columbus Day and removing statues of historical figures are attacks on our biblical history with God because those historical moments actually point us to God’s history with our nations. This history should make us want to learn why God gave these blessings, and why the United States and British peoples are no longer being blessed today.

The second biblical truth under attack is the truth about human nature. The Bible teaches that human nature is inherently selfish and sinful. Jeremiah 17:9 calls the human heart “deceitful above all things, and desperately wicked.” Men are experts at deceiving themselves. King Solomon prayed at the dedication of the temple that those who visited it would “know every man the plague of his own heart” so they could turn to God for help with this plague (1 Kings 8:38).

The radical left is constantly pushing the lie that socialism, Marxism or indigenous culture would solve all our societal ills. But they reject as the source of our problems any law or society that has any shred of biblical truth. The U.S. Constitution was based on biblical principles. Columbus and the age of European colonization helped fulfill the promises to Abraham’s descendants and created a free republic based on elements of God’s law.

What the Bible teaches about human nature, and the lesson of why God used Israel in His master plan, points us to the solution for all our problems. Mr. Armstrong wrote in Mystery of the Ages that “the mind of man, with its one spirit, and without the addition of God’s Holy Spirit, could not have spiritual discernment—could not solve human problems, could not cure the evils that were besetting humanity. The nation Israel would be His guinea pig to demonstrate that fact.”

All peoples, races and nations, including Israel who had knowledge of God’s laws, have utterly failed to solve our monumental problems on this Earth. The solution is not to look to indigenous cultures, socialism, experts or an elite ruling class; the only solution is to look to God. If we repent and obey God, He promises us the greatest gift available in the universe: the Holy Spirit, which is the only power that can heal the plague of our human hearts.

God has a master plan to give all people of all nations the chance to receive the Holy Spirit and live in peace and prosperity in the Kingdom of God. That is the future and solution we need to be focused on. Please read Mystery of the Ages to learn more about God’s transcendent plan for you.