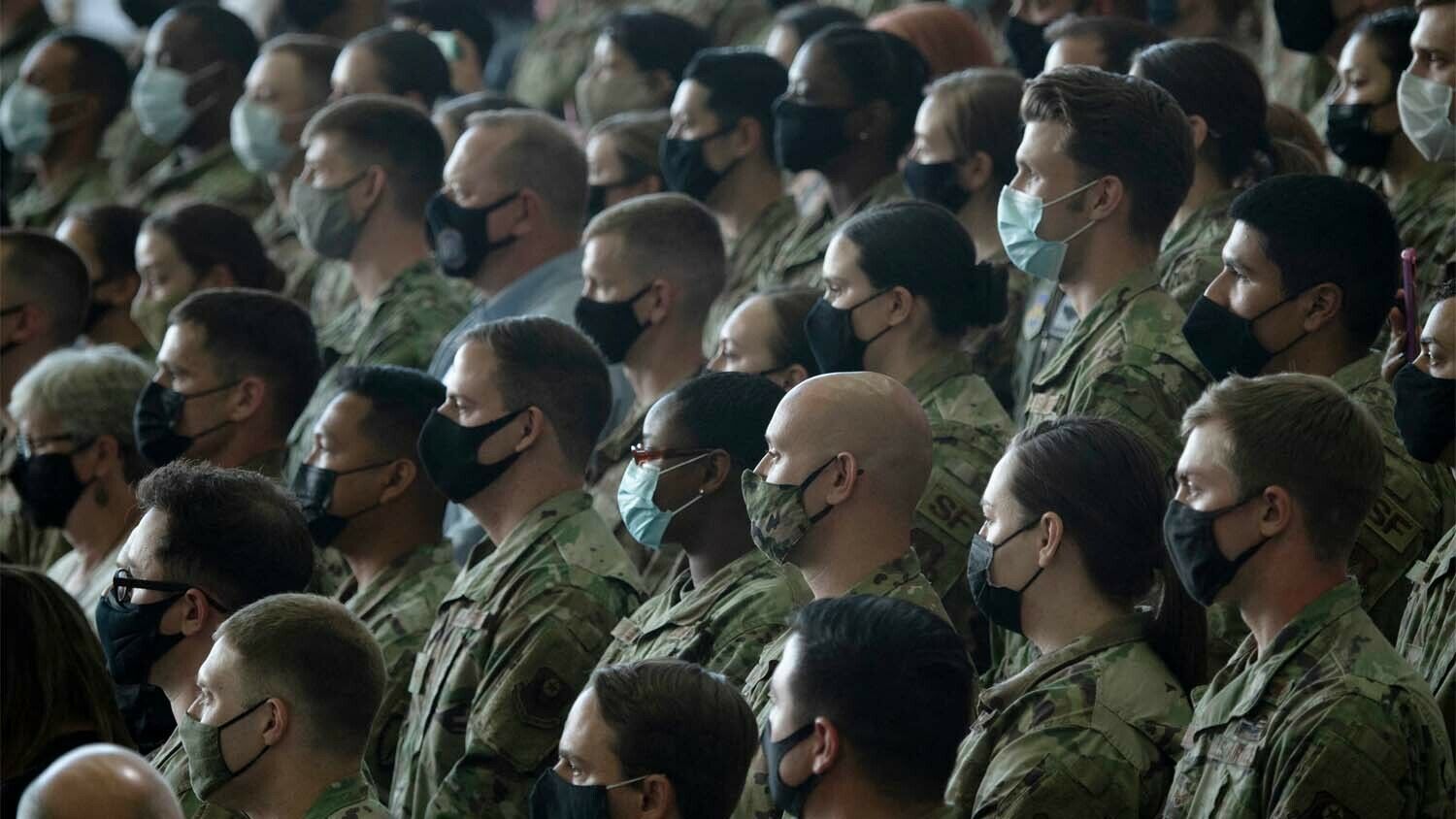 America is completely unprepared for the next war.

In April 2021, the commander for United States Strategic Command, Adm. Charles Richard, testified in front of Congress that the U.S. was unprepared to fight multiple fronts against a Russian-Chinese offensive.

Both nations have tested American resolve since Joe Biden entered the White House: Russia placed 100,000 troops on the Ukrainian border, and China has been operating military aircraft within Taiwanese airspace. This has both escalated tensions and exposed America’s mirage of strength.

The National Interest wrote on October 4:

[T]he United States might well face a two-front or even a three-front war if Russia were to invade Ukraine and/or other Eastern Europe nations, China were to attack Taiwan, and North Korea were to attack South Korea simultaneously and in coordination. Admiral Richard testified that the United States currently has no contingency plans for how to confront two allied nuclear superpowers in a future war. Thus, the ability of the United States and its allies to survive, let alone win, a war fought with such powerful, unconventional weapons against our enemies remains very much in doubt.

After decades of watching Russia and China rise to become peer-level threats (meaning near equal in military capability) the U.S. has “no contingency plans” to fight them at the same time. It appears the military has been more concerned with teaching critical race theory and becoming woke than creating plans to defeat America’s enemies.

Even on a singular front in a war against one peer-level enemy, the U.S. military appears to be outmatched. Edward Geist, a policy researcher at rand Corporation, noted: “If the United States had to fight Russia in a Baltic contingency or China in a war over Taiwan … Americans could face a decisive military defeat. … Put bluntly, the U.S. military could lose the next state-versus-state war it fights.”

In recent classified war games, the U.S. military lost to Russia and China in every single simulation. David Ochmanek, a key defense planner, remarked: “When we fight Russia and China, ‘blue’ [the U.S.] gets its [butt] handed to it.” The New York Times reported that in the last 18 Pentagon war games depicting a battle with the Chinese in the Taiwan Strait, the U.S. lost 18 times.

Geist wrote in War on the Rocks: “These findings suggest that, in a pitched battle with a near-peer adversary such as China, American forces may be defeated even if its commanders don’t make any mistakes.” These are chilling results. Even if no mistakes are made, the U.S. would probably lose; the history of war informs us that mistakes will be made.

The U.S. military is concerned about fighting conventional wars in foreign theaters; however, this assumes that weapons of mass destruction would not be used as the first resort in a preemptive strike on the U.S. homeland. In these scenarios, the U.S. fares even worse: The U.S. not only loses the battle, it ceases to exist as a nation.

America has fallen behind Russia and China in nuclear warhead capabilities. It has also failed to create any deterrence for other weapons developed by our adversaries. Both Russia and China have developed super electromagnetic pulse (emp) weapons; these are nuclear bombs designed to enhance the emp emitted from a detonation. National Interest reported:

Such an attack could cause all 94 nuclear reactors in the United States to melt down, spreading radioactive contamination and fallout to nearby cities. If such an attack were to occur, then U.S. leaders might not be certain which country attacked us or who to retaliate against. In 2008, the Congressional emp Commission estimated that such a cataclysmic attack on a national scale could cause up to 90 percent of Americans to die within 12 months due to starvation, disease and societal breakdown. A comprehensive cyberattack on the U.S. homeland could also kill tens of millions of Americans.

Experts believe these weapons would cripple all critical infrastructure, including food and water distribution, power grids, transportation, communications and Internet, in a matter of minutes. Experts also believe the super emps and cyberattacks could even disrupt the U.S. military command and control system and a president’s ability to launch retaliatory nuclear attacks.

The U.S. military and government have no contingencies to prevent or combat such an attack from Russia or China. U.S. policymakers have been operating in a capsule of pride and self-deception. They do not consider America could lose the next war, even though the U.S. has not won a war since 1945. If America could not beat North Korea, North Vietnam or the Taliban, what chance does it have against this powerful Asian axis?

The Bible explains the next major war America will face in astounding detail. It involves Russia and China, but the Bible reveals the future is far worse than what these scenarios predict.

The Rise of Gentile Powers

The period just before Jesus Christ returns is called the “times of the Gentiles” (Luke 21:24). This refers to the world being dominated by non-Israelite nations. (Please read Herbert W. Armstrong’s book The United States and Britain in Prophecy to prove for yourself the biblical identity of the Anglo-Saxon peoples.)

The Bible identifies four major Gentile powers that would dominate the end time: Russia, China, Iran and a German-led European superstate. The predominate powers will be the European revival of the Holy Roman Empire and an Asian axis between Russia and China.

The peer-level war America will face occurs in two phases: an economic siege, and a nuclear strike.

This siege is a trade war by “the mart of nations” prophesied in Isaiah 23:3. This alliance is primarily between the Asian axis and the Holy Roman Empire. These Gentile powers will work together temporarily to drag down America’s economy.

Ezekiel 5 outlines that the American and the British peoples will lose one third of their populations during this siege due to famine and internal violence. That is over 120 million people dying during this economic siege. “Both sieges end at the same time, when all three nations are invaded militarily,” writes Mr. Flurry. “Hosea 5:5 says that America, Britain and Judah will fall together. That is referring to the military attack!”

The siege against the U.S., United Kingdom and Israel ends when all three nations are attacked militarily. This is the second phase of the future war. But who is the attacker?

Before this, when the Tribulation began, this emperor was cooperating with the Russians and the Chinese to besiege the Anglo-Saxon nations economically. But perhaps he hears rumors that the Asian axis is planning to invade North America and conquer it for its own.

Regardless of what the exact tidings are, the Bible is clear that it will be the Holy Roman Empire that single-handedly invades North America. And this passage is clear that these tidings will provoke the emperor to go forth with great fury to destroy!

Ezekiel 5 again shows that this attack by the Holy Roman Empire will burn the cities “with fire,” implying a nuclear attack. Another third of the U.S. and British peoples will die in this attack. The final third of the Israelite peoples will be taken as slaves by the victorious power. (This is all explained in great detail in Ezekiel—The End-Time Prophet.)

This is World War iii, or what the Bible calls the Great Tribulation. This is not merely a scenario the U.S. military will face; it is the imminent future of all the English-speaking world! Can anything be done to stop such a disaster from happening?

There was a time in ancient Israel when God used the Prophet Elisha to reveal different military threats against the kingdom of Israel. Elisha worked with an unrighteous king at that time and showed him where the Syrians were planning to attack (2 Kings 6:8-10). King Ben-haddad of Syria was furious and thought one of his military leaders was a spy: “And one of his servants said, None, my lord, O king: but Elisha, the prophet that is in Israel, telleth the king of Israel the words that thou speakest in thy bedchamber” (verse 12).

This was an amazing time when God revealed the enemy’s plans to the nation’s leadership! But did you know something similar has happened today? The U.S. military does not need scholarly analysis and costly war games to know what and where the next war will be. God has revealed through Bible prophecy the military strategy of America’s enemies. Our nation’s leaders need only humble themselves and submit to God’s revelation and they could make sound policy decisions to protect America.

Wars are not won by clever strategies, amassing physical weapons, or even knowledge of enemy plans. The teenage King David said before conquering Goliath: “And all this assembly shall know that the Lord saveth not with sword and spear: for the battle is the Lord’s, and he will give you into our hands” (1 Samuel 17:47). God determines the outcomes of battles.

That is how America has won any war. George Washington crossing the Delaware in 1776, Ulysses S. Grant’s overland campaign in 1865, the D-Day invasion in 1944—God miraculously intervened to give victories in all of these cases. When Syria sent an entire army to capture Elisha, the prophet said, “Fear not: for they that be with us are more than they that be with them” (2 Kings 6:16), and God opened the eyes of Elisha’s servant to reveal a fiery angelic army protecting them (verse 17). That is the power America desperately needs in this end time!

But the other key needed is repentance. God allows the terrible destruction to come because Israel refuses to repent of its sins and turn to Him (Leviticus 26; Deuteronomy 28; Ezekiel 33). But God has a contingency plan to save anyone who will repent. You can be part of that plan, but you need courage to take action and listen to God.

Please read Ezekiel—The End-Time Prophet to learn more about Bible prophecy and how you can act on this vital knowledge.