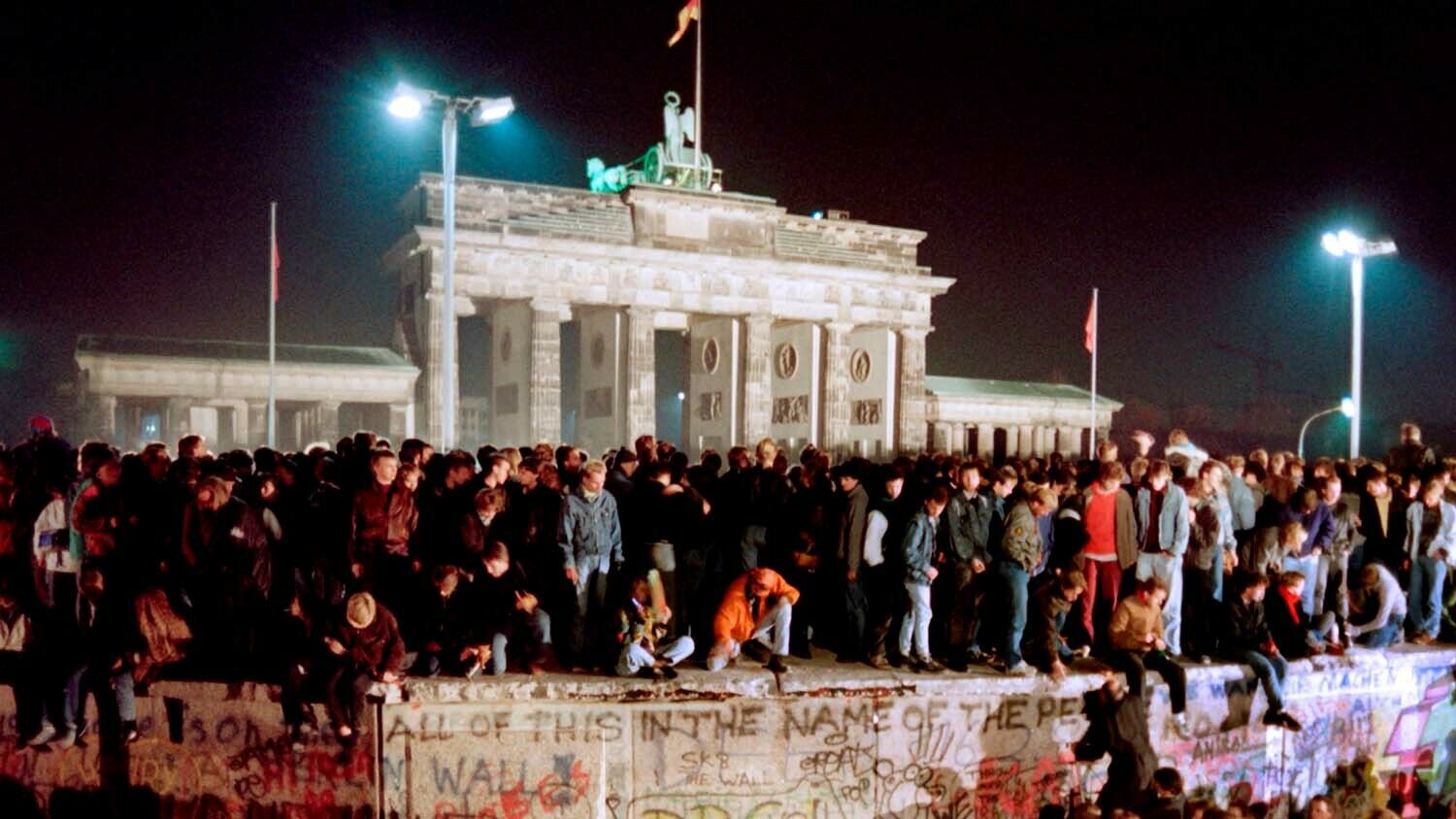 Thousands of young East Berliners crowd atop the Berlin Wall, near the Brandenburg Gate, on Nov. 11, 1989.
GERARD MALIE/AFP/Getty Images

Over 30 years of Germany rising as superpowers collapse

Every year in Germany, October 3 is celebrated as German Unity Day, commemorating when East and West Germany were reunified in 1990 following the fall of the Berlin Wall. It has been 31 years since the first German Unity Day. German reunification remains one of the most pivotal events of modern history. Thirty-one years later, this event has only magnified in importance.

“The fall of the Berlin Wall catalyzed world events into an unprecedented fast-paced mode that has brought within its wake such massive geopolitical changes as few could have envisioned during the waning years of the Cold War,” late Trumpet columnist Ron Fraser wrote on the 20th anniversary of the reunification.

Stephen J. Hadley, former United States national security adviser, said reunification “was nothing short of a miracle.” The nation once led by Adolf Hitler has gone from a defeated subservient, divided, with half its inhabitants living in Communist squalor, to becoming an economic powerhouse at the heart of Europe. There is a spiritual dimension to the rise of Germany.

Trumpet editor in chief Gerald Flurry writes in The Former Prophets: “History becomes prophecy. Not all prophecy is history, but a lot of history becomes prophecy. History prophesies the fate of nations—whether they will thrive or collapse!” Some of the events that brought about the fall of the Berlin Wall in the late 1980s are repeating themselves again right now. These events are clarifying where we are in Bible prophecy!

Rising in the Shadow of Collapse

On Feb. 15, 1989, the last Soviet soldier left Afghanistan. During 1988, the Soviet Union had been effectively withdrawing all civilians and all 100,000 troops from the 40th Army in Afghanistan. The operation was divided into two phases, with the Soviets transitioning control of garrisons and key infrastructure to the Communist-allied Democratic Republic of Afghanistan troops.

General Secretary Mikhail Gorbachev made the decision in 1986 to withdraw all Soviet forces by 1988, calling Afghanistan a “bleeding wound.” 1985 was the bloodiest year of the war after the Soviet Army sought a military victory over the Mujahideen, or the local insurgents. During the 10-year conflict, 15,000 Soviet troops died, 18,000 Afghan troops died, 90,000 Mujahideen fighters died, and between 1 million and 2 million Afghan civilians were killed. It was a brutal war that drained the lifeblood of the Communist superpower.

Franz-Stefan Gady wrote at the Diplomat: “Notably, the Soviet retreat from Afghanistan from May 1988 to February 1989 was not a rout. Rather, it was a well-executed and carefully planned disengagement operation ….” Despite the orderly withdrawal, the defeat was a shocking disaster for a world power.

Only nine months later, the Berlin Wall fell, and the Soviet Union was on the fast track to complete collapse. Just before Germany was reunified, a superpower had retreated from Afghanistan.

Only a few weeks ago another superpower retreated from Afghanistan in defeat: The United States’ withdrawal was a “well-executed and carefully planned” disaster that completely humiliated America. Germany’s 30-year reunification is bookended by superpowers retreating in disgrace from Afghanistan.

The Soviet withdrawal from Afghanistan emboldened its enemies, including the U.S., and contributed to the reunification of Germany. Other factors played a role in the event as well, but Germany rose to power in Europe as the Soviet power collapsed. The vacuum of a superpower collapsing aided the agenda of German ambitions.

Will the collapse of the United States on the world scene help propel German ambitions to becoming a world superpower? Is it possible that another important event in Germany will happen only months after the world’s lone superpower retreats from Afghanistan?

Trumpet editor in chief Gerald Flurry recently wrote in his article “After Afghanistan and AUKUS—Watch Europe!”:

European leaders were shocked by America’s retreat from Afghanistan. The United States exposed its willingness to abandon our friends and allies. It proved, in fact, that we will not even help our own people! We sneaked our military out and left at least hundreds of Americans behind. That is not how a superpower operates! As I wrote in my cover story in our October 2021 Trumpet issue, that was designed, on purpose, to be a debacle.

After witnessing what America did, European leaders know they cannot rely on the U.S. as an ally.

Europe is in a precarious state right now, and is on the cusp of radical change. We must understand how the Afghanistan debacle is hastening that change—and will help to catalyze the formation of this biblically prophesied empire!

Something important is going to happen in Europe, and it will probably revolve around Germany. The Bible prophesies that end-time Europe will become a superpower. Mr. Flurry explained: “The Bible prophesies that 10 kings will arise within Europe and combine to form a single formidable empire—the Holy Roman Empire (read ‘Why the Trumpet Watches Europe’s Ongoing Unification Project’). I believe the Afghanistan debacle will help that alliance of 10 kings to coalesce.”

We are about to witness the fulfillment of Bible prophecy! Remember where you first heard that Germany would rise to become a world power over 10 kings in Europe.

Herbert W. Armstrong wrote in the Plain Truth magazine in 1954:

And now, a short nine years [after Germany lay prostrate in defeat], behold the spectacle of Washington and London making every possible diplomatic effort, backed by American dollars, to do two things: create a United States of Europe and to rearm Germany. … Germany inevitably [will] emerge as the leader of a united Europe. It will require some spiritual binding force to inspire this confidence—to remove these fears—and that spiritual binding force must arise from inside Europe! All Europe is actually ready—just waiting for the confidence-inspiring leader …. That man is there somewhere.

After 45 years of Germany rebuilding during the Cold War, becoming reunified in 1990, and after 30 years of German reunification as the heart of the European Union, has this forecast been proved correct? Mr. Armstrong knew what modern Europe would look like because of Bible prophecy. (Please read our free booklet He Was Right for a full explanation.)

Germany is unified and has been using the past 31 years to unify Europe around its ambitions. “Germany has a master plan,” Mr. Flurry warns in Germany’s Conquest of the Balkans. “We have warned about that master plan since immediately after World War ii. Germany is fast becoming the fascist superpower of the West, as the United States collapses as a superpower.”

America’s collapse in Afghanistan has placed these Bible prophecies on center stage. As Mr. Armstrong and Mr. Flurry have explained, the last piece of the puzzle for Europe to become a superpower is a confidence-inspiring leader. With German Chancellor Angela Merkel on her way out and the German elections being so indecisive, could we see this leader emerge in Europe? Mr. Flurry wrote in “After Afghanistan and AUKUS—Watch Europe!” that “Europe is up for grabs. It is effectively leaderless right now. It is, actually, perfectly positioned for a strongman to come in.”

The emergence of a European strongman, and the 10 kings to lead a European Holy Roman Empire, could be a world-changing, pivotal event that happens in Germany just months after a superpower has retreated from Afghanistan.

Bible prophecy is about to be fulfilled before your very eyes! For more than 75 years, we have been accurately warning you based on Bible prophecy. The world is more dangerous and more unstable than ever before. Do you think you can ignore this warning? Read the proof for yourself in He Was Right, and then take advantage of the moment while there is still time left to act!