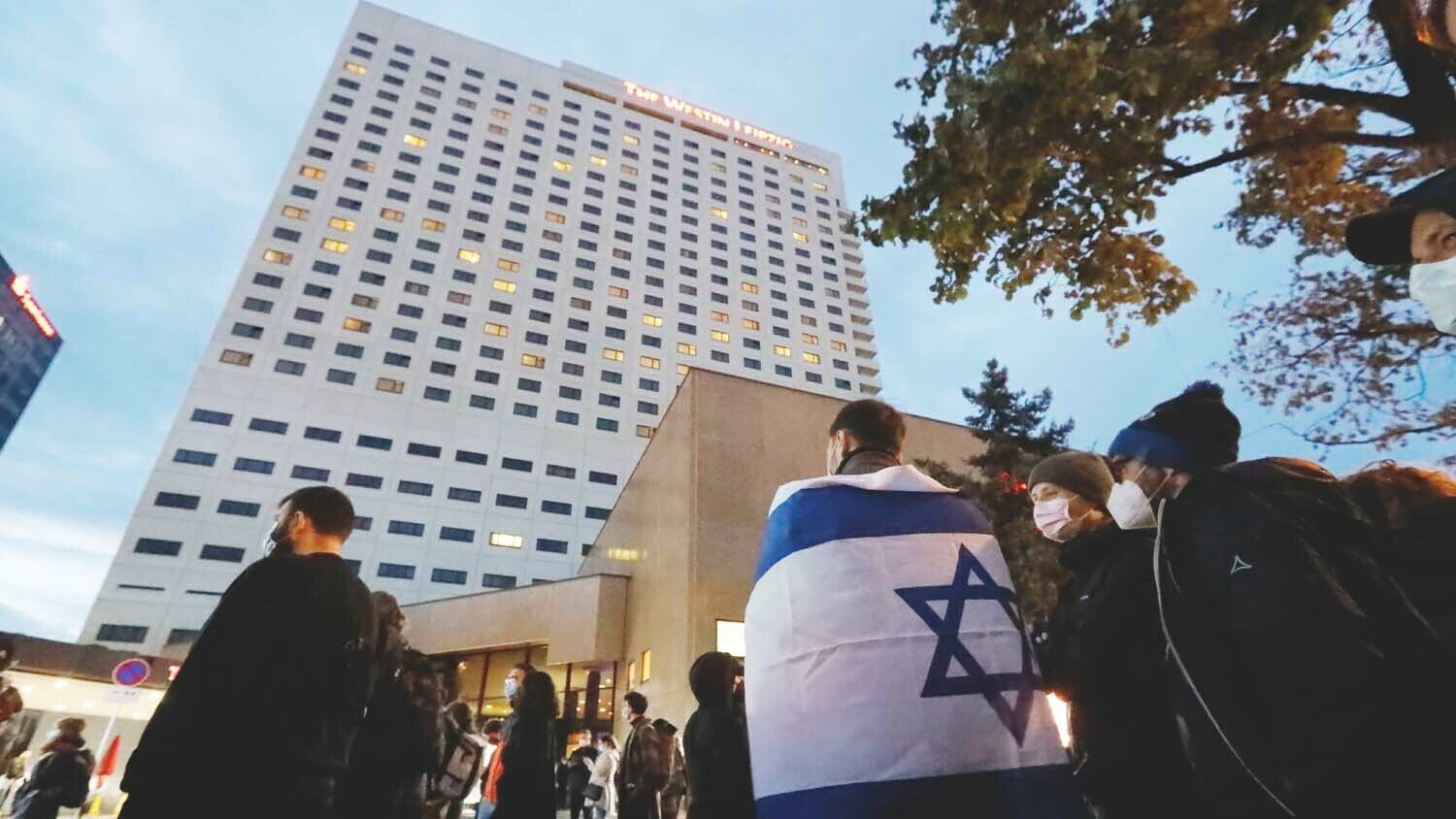 Hundreds of demonstrators gather in front of the Westin Hotel in Leipzig on October 5.
Dirk Knofe/picture alliance/Getty Images

History is repeating itself.

German musician Gil Ofarim, who is Jewish, related an experience on Instagram that he had at the Westin luxury hotel in Leipzig, Germany, on Monday, October 4. The musician recounted that he was waiting his turn to check in to his room. One by one, however, the hotel staff pulled other customers ahead of him. After some time, Ofarim questioned the procedure. Someone shouted in the background, “Pack your star away!” He was wearing his Star of David necklace. The receptionist then told him that only after covering the Star of David would he be allowed to check in.

During his October 5 video message, Ofarim is visibly shocked by the experience, becoming teary-eyed near the end. The fact that such persecution, and far more dangerous ones, is again common in Germany should deeply concern the whole world. In 2020, Germany experienced the highest number of anti-Semitic crimes since record-keeping began in 2001, Spiegel Online reported. There were 2,275 anti-Semitic crimes last year; that is an average of six per day. Spiegel noted that of those crimes, 55 were classified as acts of violence.

Proportionally no group in Germany has witnessed more persecution. Germany currently has a population of over 83 million people. Before the 1930s, the Jewish community had around 560,000 members. Since then, the community has shrunk to around 95,000. In a 2016 article, abc wrote: “The evidence produced through police reports on hate crimes and studies by anti-hate organizations show that in North America, Europe and Australia the most frequent targets of abuse and violence on account of religious affiliation continue to be Jews.”

Chancellor Angela Merkel lamented in 2018: “It is hard to understand, and it is a shame that no Jewish institution can exist without police surveillance, be it a school, a kindergarten or another institution, such as a synagogue.” One can only imagine how much blood would be shed if the German state were to drop its protection of its Jewish communities.

In October 2019, on the Jewish holiday of Yom Kippur, a right-wing extremist attempted a mass shooting in a synagogue in Halle, Germany. A bloodbath was only prevented by his failure to shoot open a locked door. Two years later on the same Jewish holiday, a 16-year-old Syrian allegedly planned to set off explosives at a local synagogue in Hagen, Germany.

Germany seeks to give the impression that it has overcome its Nazi past. An Israeli soccer team played at Berlin’s Olympiastadion on September 30, marking the first time an Israeli soccer club has played there. Adolf Hitler built the stadium as a propaganda structure for the 1936 Olympics. Around 1,000 fans traveled from Israel to attend the September 30 game. Representatives from the Young Forum of the German-Israeli Society also attended.

But the historic moment did not go over well. A police officer observed a man trying to set fire to an Israeli flag. Fans of the Israeli soccer team reported threats and insults. Another man was reportedly arrested for shouting, “Sieg Heil,” the Nazi victory salute.

Another recent headline from October 4 stated, “Greta Thunberg’s Friend Is Also an Israel Hater.” Thunberg is famous for the Friday for Future marches, which are supposed to raise awareness of the climate crisis. But as Germany’s Bild explained in its article: “Since the Gaza war in the summer, when Greta Thunberg criticized Israel and refused to condemn the terrorist group Hamas, the attitude of the climate icon to the Jewish state has become bitterly clear. Now there is new trouble. At the climate protest in Milan, the ‘Fridays for Future’ leader appeared very familiar with a young activist who openly presented an anti-Israel scarf.”

Just days later, Germany’s Tagesspiegel wrote in “Anti-Semitic Graffiti in Auschwitz-Birkenau”: “Nine wooden barracks were spray-painted with slogans in English and German …. Some of them referred to biblical passages often quoted by anti-Semites, while others denied the Holocaust, the systematic murder of millions of Jews by the Nazis.”

In response, the Auschwitz-Birkenau Museum said that it was “an outrageous attack on the symbol of one of the greatest tragedies in human history.” A 2018 survey by the World Zionist Organization conducted prior to International Holocaust Remembrance Day on January 27, found that half of European Jews said they do not feel safe being in public using a Jewish name or seen with Jewish symbols, such as a kippa or Star of David.

The German federal government reported in August that 2020 saw 580 anti-Semitic crimes in the East German states—a drastic increase over previous years. In April, the Berlin Research and Information Center on Anti-Semitism reported that Berlin experienced a 13 percent rise in anti-Semitic incidents in 2020 compared to 2019. In February, it was reported that the police had identified 1,367 anti-Semitic suspects from 2020, but only five had been arrested and not a single arrest warrant had been issued. According to a 2020 Civey survey, 33.5 percent of Germans believe their nation’s handling of Nazi crimes is “exaggerated.”

Before they found themselves in concentration camps, Jews in Europe were ridiculed, mocked and oppressed. Europe today is heading the same direction.

“In Europe, Jews are once again behind bars,” assistant managing editor of theTrumpet.com Richard Palmer wrote in “The One Minority Society Loves to Hate.” “Not in concentration camps—yet. But whenever they gather in synagogues, Jewish schools or other cultural centers, they are doing so behind walls, fences, gates and guards.”

The Trumpet has long warned that efforts to fight anti-Semitism will not succeed. Most people do not understand why there is so much hatred of the Jewish people. The history of Europe is full of pogroms, and yet few understand the cause. “The One Minority Society Loves to Hate” explains the cause in detail and points you to literature that can help you get to the root of this phenomenon.

Anti-Semitism isn’t just history. It’s also not a trend that will vanish as others rise. Anti-Semitism is a modern trend you can’t afford to ignore. It is a tragic harbinger of a future holocaust that has been prophesied in the Bible.

Yet ultimately, a bright future is ahead for all mankind. The Bible reveals that mankind will finally learn what is wrong with society and repent of these evils. To understand this deeply significant topic, read “The One Minority Society Loves to Hate” and also request a free copy of Germany and the Holy Roman Empire, which explains in detail why Germany has failed to overcome its past.