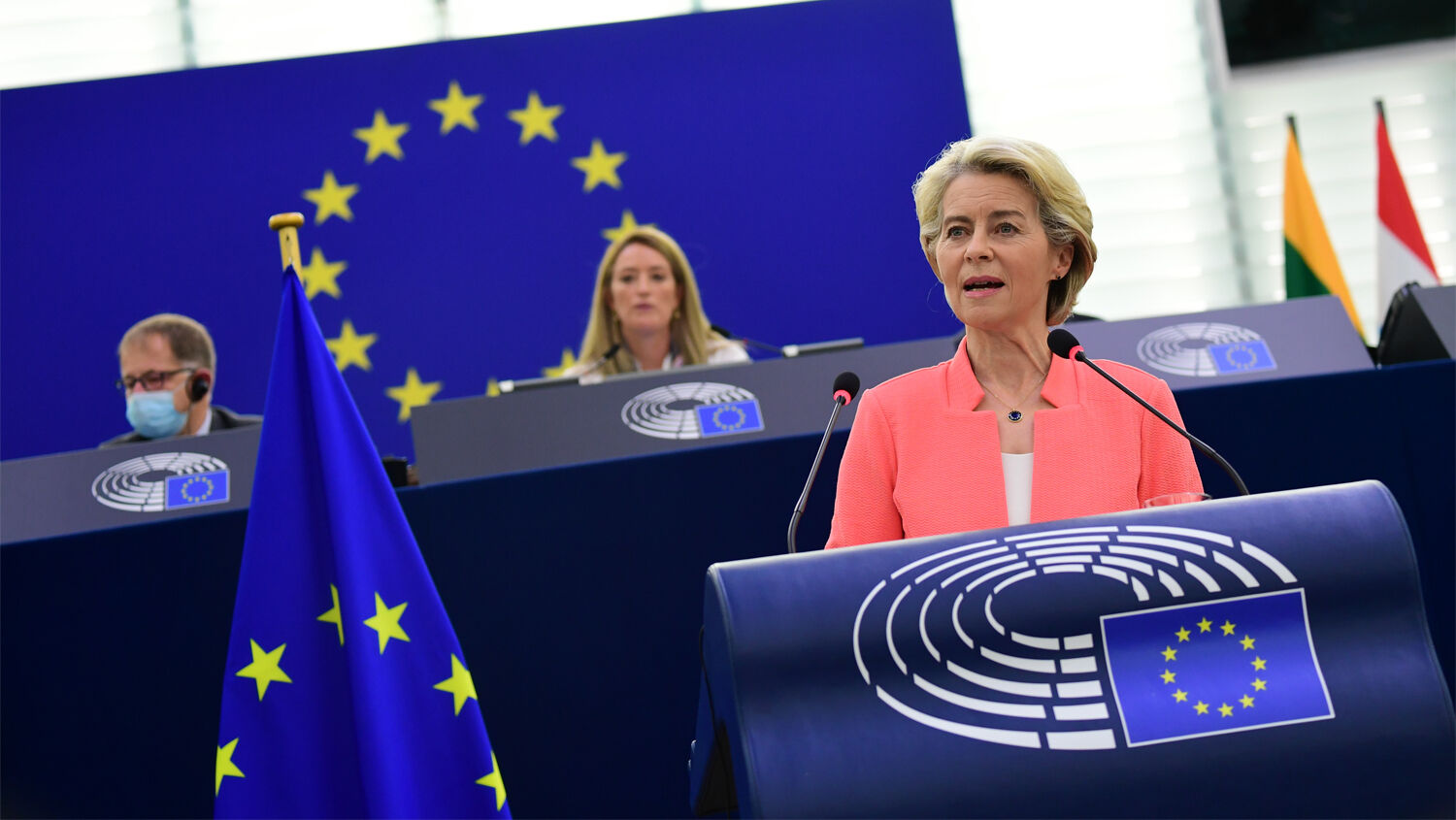 Ursula von der Leyen, President of the European Commission delivers “The State of the European Union” address during a plenary session in Strasbourg, France, on September 15, 2021.
EU Commission/Pool/Anadolu Agency via Getty Images

‘There will be missions where nato or the United Nations will not be present but where Europe should be.’

“Europe can—and clearly should—be able and willing to do more on its own,” European Union Commission President Ursula von der Leyen told the European Parliament in Strasbourg, calling for a European defense union. In her state of the union address, she said the time had come for greater cooperation on defense policy at the EU level. She noted that more details would be discussed at a summit next year.

“President [Emmanuel] Macron and I will convene a summit on European defense,” von der Leyen said. “Honorable members, it is time for Europe to step up to the next level.” She also said that strengthening of Europe militarily would be done in close cooperation with the North Atlantic Treaty Organization and that she is working on a joint declaration with the trans-Atlantic alliance.

Next year’s EU summit will be held during the French EU Council presidency in the first half of 2022. French President Macron is a strong proponent of an EU army but his ideas have been met with staunch resistance so far. The urgency of the times and the lack of American leadership could give him an unprecedented chance to unite Europe more strongly.

“There will be missions where nato or the United Nations will not be present but where Europe should be,” von der Leyen said. “You can have the most advanced forces in the world, but if you’re never prepared to use them, what are they? That is what has held us back until now. It’s not just a shortfall of capacity; it’s the lack of political will.”

In a summary of von der Leyen’s speech, n-tv.de noted: “There is no doubt that Europe has the military capability for more independence, but what has been lacking so far is the political will.” As crises intensify, the pressure for core European nations to unite militarily will get stronger.

After World War ii, Germany was initially denied having its own army, but later granted an armed forces that would be closely tied to nato. Today, Germany is Europe’s economic powerhouse and natural leader, and it is seeking to lead Europe’s own independent missions.

The late theologian and author Herbert W. Armstrong warned of this military union for decades. In May 1953, he wrote that “10 powerful European nations will combine their forces.”

In August 1978, he warned: “The Europeans are far more disturbed about their safety in relying on United States military power to protect them than Americans realize! … Europeans want their own united military power! They know that a political union of Europe would produce a third major world power, as strong as either the U.S. or the ussr—possibly stronger!”

Many believe that Europe’s military unification will be a force for good. But will it? Mr. Armstrong based his forecast on Bible prophecy and history, and came to an entirely different conclusion. Revelation 17:12 describes “ten kings, which have received no kingdom as yet; but receive power as kings one hour with the beast.” As Mr. Armstrong explained in Who or What Is the Prophetic Beast? this prophecy refers to a military empire in modern Europe.

To learn how Mr. Armstrong came to that God-revealed conclusion, read “Europe’s Push Toward a Unified Military” and order a free copy of Who or What Is the Prophetic Beast?