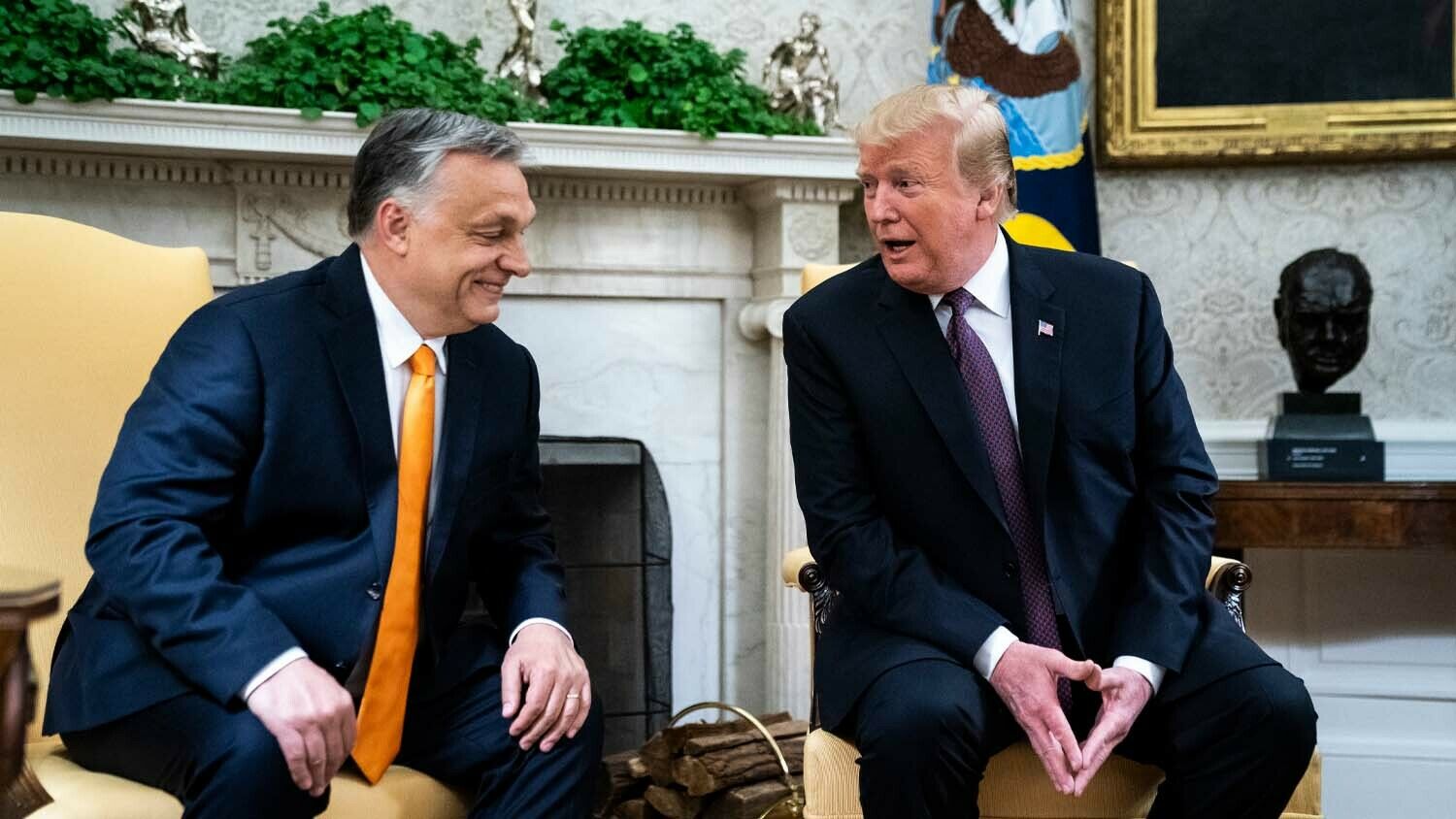 A fond relationship with unseen jeopardies

United States President Donald Trump praised Hungarian Prime Minister Viktor Orbán and thanked him for his friendship, in a letter dated August 12. The letter was published on Orbán’s Facebook page on August 31. Weeks prior, Fox News’s Tucker Carlson visited the Hungarian prime minister for an extensive interview. This developing fond relationship aggravates liberals in the United States. But the relationship is concerning for reasons neither the left nor the right understand.

In his letter, Trump praised Orbán for his determination to continue fighting for the ideals that both sides cherish. “Thank you for your beautiful letter and for your generous support and encouragement on behalf of the citizens of Hungary,” Trump wrote. “I am grateful for your continued friendship and enduring commitment to fighting for the ideals you and I cherish: freedom, patriotic pride and liberty.” These values bonded the two leaders during Trump’s presidency. In 2019, Orbán visited President Trump in Washington. The two found a lot of reason to praise one another as they both pursued the same policy of putting their own country first. Germany’s Die Welt noted at the time, however, that this policy also prevented close cooperation. Orbán wants the best for Hungary, which means cooperating with the European Union, Russia and China; Trump wants the best for the U.S., which means opposing the EU, Russia and China. It is clear, however, that Mr. Trump wishes more European leaders were like Orbán.

An additional note below Mr. Trump’s letter reads: “Great job on Tucker (Fox). Proud of you!” In the Tucker Carlson interview, Orbán stressed rejecting illegal migration, the importance of national values, and the right to make sovereign decisions. Unlike most of the media, Carlson portrayed Hungary as overwhelmingly free. He asked: “Who is freer? In what country are you more likely to lose your job for disagreeing with the ruling class’s orthodoxy? The answer is pretty obvious, though. If you’re an American, it is painful to admit it as we have discovered.” Carlson was referring to the cancel culture in the U.S. Yet Orbán is also accused of dismantling core democratic institutions.

During the coronavirus crisis, Orbán passed a law that allows him to rule by decree. In “Coronavirus and the Holy Roman Empire,” Trumpet editor in chief Gerald Flurry warned in 2020: “Hungarian Prime Minister Viktor Orbán is also growing more autocratic in this crisis. Hungary was only mildly affected by coronavirus, yet on March 30, Hungary’s parliament gave Orbán dictatorial powers. Now parliament is closed, elections are canceled, and anyone spreading ‘false’ information can be imprisoned for five years. Democracy has been replaced by rule of decree.”

Spiegel Online warned on April 3, 2020: “Hungary’s prime minister has abolished democracy. If the EU does not act, authoritarianism will spread in Europe.”

In “A Decade Viktor Orbán: The Iron Process,” Spiegel Online wrote on April 25, 2020: “Viktor Orbán’s party won the election 10 years ago. Hungary—once a symbol of overcoming oppression—has since dismantled democracy. His supporters are also surprised at how far the prime minister has gone.” Spiegel summarized the changes Hungary undertook, highlighting:

Some of the criticism is simply because Orbán booted liberals out of prime jobs. While the radical left continues to take over the Western world’s government institutions, Orbán pushed back against that trend in Hungary.

But some of the criticism against Orbán’s dictatorial advances are valid, such as his crackdown on free press.

While Tucker Carlson may be right that Hungary is more free than the U.S., to really understand what is happening in Hungary, you have to understand the foundation Orbán’s politics are built on. In his 2020 article, Mr. Flurry explained that following World War ii, Hungary was under Soviet rule. But as the Iron Curtain fell, Hungary joined the European Union. The Catholic Church, which shaped Hungary for centuries, played a crucial role in that decision.

The Catholic Church shapes Hungary’s policies today. “Hungary has for centuries been ruled by the Habsburg dynasty,” wrote Mr. Flurry. “The religion, culture and ties to Rome outlasted its occupation by the Soviet Union.” The Hungarian government, while taking a stand against immigration (which is mostly Islamic), has entered into stronger cooperation with Catholic and Protestant churches.

On August 27, Orbán traveled to Rome to attend the 12th annual meeting of Catholic legislators to discuss “the great issues of the world and the possibilities of Christian politicking, in an uncertain world,” Hungarian State Secretary Balázs Orbán wrote on Facebook. Prime Minister Orbán’s primary goal is to forge an alliance of the “Christian right” in Europe that opposes the liberal mainstream.

What conservatives in America don’t realize is that the Christian right in Europe is actually Catholicism.

Europe has a long history of governments with an Orbán-like relationship with religion. Charles the Great, or Charlemagne, was one of the first to forge this kind of relationship. Here’s how we summarize that history in our free booklet Germany and the Holy Roman Empire:

As emperor of the “Holy” Roman Empire, Charles felt it his duty to spread the Christian faith using whatever means necessary. The New Encyclopedia Britannica says, “The violent methods by which this missionary task was carried out had been unknown to the earlier Middle Ages, and the sanguinary [bloody] punishment meted out to those who broke canon law or continued to engage in pagan practices called forth criticism in Charles’ own circle” (“Charlemagne, Emperor”).

The violence Charlemagne used to enforce the Catholic religion on his subjects was simply unknown in earlier empires! He forced his brand of Christianity on everyone. His empire may have had distinct ties to the ancient Romans, but it was certainly not “holy”—even if there was a great church guiding it.

And yet for centuries to come, the aim of succeeding emperors was to restore the traditions of Charlemagne in their quest to revive the Roman Empire!

We have to understand the root of Europe’s right, which has been inspired by the Roman Catholic Church. The Catholic Church to this day largely opposes abortion, homosexuality and other liberal trends. But historically it has also encouraged anti-Semitism. With each crusade inspired by the Catholic Church came the persecution of the Jews. In “The First Crusade and the Persecution of the Jews,” by Cambridge University Press, Jonathan Riley-Smith wrote: “Between December 1095 and July 1096 there took place the first pogrom in western European history, a series of events so distressing to the Jewish people that rumors of them reached the Near East in advance of the First Crusade, inspiring the communities there with messianic fervor, while dirges in honor of the martyrs are recited in the synagogues to this day” (March 21, 2016).

History is full of examples that show that authoritarian rulers, kings and dictators have used religion to get their way. Adolf Hitler made a concordat with the Vatican; he sought to suppress rising prostitution, homosexuality and crime in German cities.

Today, European leaders admire the Catholic Church fending off liberalism—but they ignore the evil it commits and are destined to repeat the mistake of allying themselves with this church. This is deeply significant if you consider Bible prophecy.

In Revelation 17, the Apostle John recorded a prophecy that most professing Christians ignore. “And there came one of the seven angels which had the seven vials, and talked with me, saying unto me, Come hither; I will shew unto thee the judgment of the great whore that sitteth upon many waters” (verse 1).

In Who or What Is the Prophetic Beast? the late Herbert W. Armstrong wrote: “In the 17th chapter of Revelation we find a beast, and a woman—a great, wealthy but fallen woman—who was riding the beast. The Bible describes the symbol ‘woman’ to mean a church (see 2 Corinthians 11:2; Revelation 19:7; Ephesians 5:22-27). On the other hand, ‘beast’ is a symbol of a kingdom, or empire.” This church-state combine is known as the Holy Roman Empire. But this empire is not limited to history. It is being resurrected before our eyes. The Bible reveals that the modern resurrection of the Holy Roman Empire will be a combine of European nations that share Catholic values and seek to achieve the same goal.

Hungary may play a crucial role in this resurrection. “Is the acceptance of Orbán’s dictatorship in the EU a sign that the time has come for Europe’s 10 kings to emerge?” Mr. Flurry asked, referring to the prophesied 10 kings that will lead this empire (Revelation 17:12). “It is almost certain that Hungary will be part of the coming 10-nation European superpower,” he wrote.

Our leaders today don’t understand the history of the Holy Roman Empire, and they reject the Bible’s prophecies about it. As The Holy Roman Empire in Prophecy explains, the Nazis pursued many of the same goals as the Holy Roman emperors before them. One of these goals was and is to destroy the British monarchy and to bring the English-speaking people under subjection. As Mr. Flurry shows in Ezekiel—The End-Time Prophet, Ezekiel 23 warns that this plan to destroy the English-speaking people will involve a massive betrayal.

For this reason it is astonishing to see America’s conservatives cozy up to the Holy Roman Empire. For more than a decade we have been pointing to former German Defense Minister Karl-Theodor zu Guttenberg as the most likely man to lead this coming resurrected Holy Roman Empire that we see being established in Hungary and other countries. It is interesting to note that Guttenberg often appears on Fox Business and seems to enjoy a fond relationship with anchor Maria Bartiromo, who is in contact with Trump. Guttenberg’s connections with American conservatives is deceitful as he has often expressed to German-speaking audiences his utter contempt for Trump’s policies.

While few understand the danger of merging religion and politics in Europe, the Bible and history sound the alarm. To understand this history and prophecy, request a free copy of The Holy Roman Empire in Prophecy.