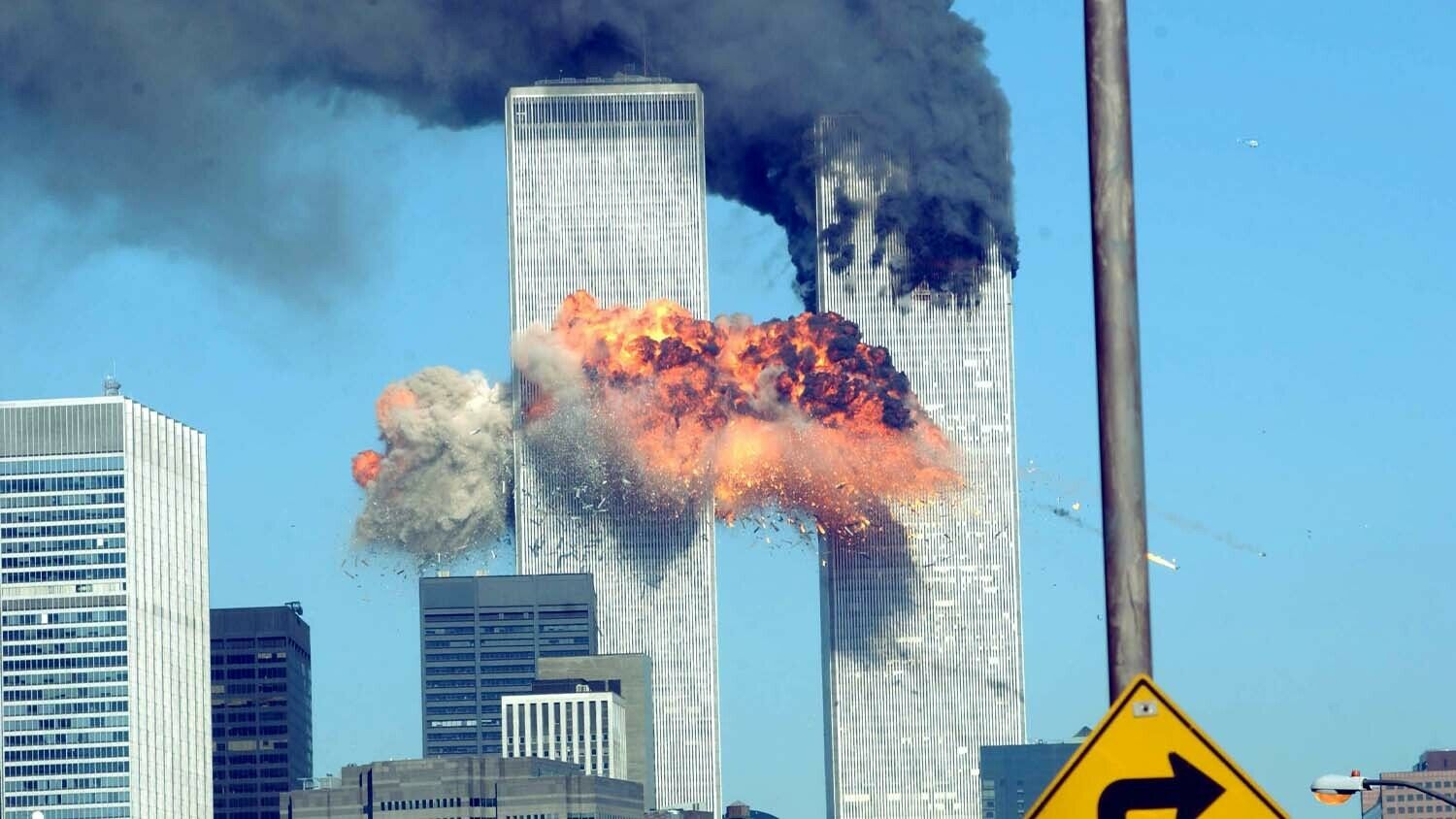 The southern tower of the World Trade Center is hit by a plane Sept. 11, 2001, in New York City.
Spencer Platt/Getty Images

Reflecting on the past, present and future

At 8:46 a.m. Eastern Standard Time, the world changed forever. American Airlines Flight 11 and all passengers on board disintegrated into flames, smoke and dust as the 747 impacted the northern tower of the World Trade Center in New York City. Only 17 minutes later, United Airlines Flight 175 exploded into the southern tower. The world watched in shock and horror as it became clear that America was under attack.

Black smoke plumed from the twin towers, with those trapped inside clinging to the side of the building and hanging out of windows. Onlookers in New York City, and those watching on televisions, witnessed humans plummet to their deaths as desperation to escape the flames drove them to jump from the towers.

At 9:59 a.m., the southern tower collapsed onto itself; the heat from the inferno inside buckled the superstructure. In a matter of moments, the entire tower vanished under a cloud of debris and dust. The north tower fell 29 minutes later. When the dust settled, downtown New York resembled a war zone. A mountain of twisted steel and concrete were the haunting sepulchers of the Twin Towers.

That day, 2,763 people died in New York, including 403 first responders. Another 189 died at the Pentagon and 44 on board United Flight 93 that crashed into a Pennsylvania field. Approximately 21,900 human body parts were found among the 1.8 million tons of rubble. Even the dust plumes that covered New York City were a mixture of toxins, harmful chemicals and human remains.

9/11 is the “day of infamy” for the 21st century. Now 20 years later, the shadow of that day’s events looms larger than ever before. The war of vengeance in Afghanistan that was sparked by those attacks has ended in the most humiliating debacle ever in American history. Trumpet editor in chief Gerald Flurry wrote in his recent article “This Isn’t Incompetence. This Is Treason!”: “This has been the worst foreign-policy disaster in the nation’s history. This terrible defeat was a spectacle seen by the entire world—and they were watching intently! It will mar our history, perhaps for the rest of time.”

Osama bin Laden, the mastermind of the 9/11 attacks, is dead. But it was a pyrrhic victory. Radical Islam has won the War on Terror. America has lost.

The goal of Osama bin Laden and other terrorists is to establish a caliphate, a civilization, of Islam ruled by Islamic (sharia) law. The fervor is supplied by the belief that conquest and terror will usher in their messiah. The events of Sept. 11, 2001, were bin Laden’s masterstroke. But why did the madman choose September 11 for the date of the attack?

Christopher Hitchens wrote in the Guardian in October 2001:

It was on Sept. 11, 1683, that the conquering armies of Islam were met, held, and thrown back at the gates of Vienna. … The Ottoman Empire never recovered from the defeat; from then on it was more likely that Christian or Western powers would dominate the Muslim world than the other way around.

Pulitzer Prize-winning author Lawrence Wright also pointed to the significance of this battle to the terrorists:

[Al Qaeda] bitterly perceived the contradiction embodied by Islam’s long, steady retreat from the gates of Vienna, where on September 11–that now resonant date–in 1683, the king of Poland began the battle that turned back the farthest advance of Muslim armies. For the next 300 years, Islam would be overshadowed by the growth of Western Christian societies.

We don’t know for certain if that is why bin Laden chose Sept. 11, 2001, but we do know that the Islamic world has a long memory. And events in Afghanistan have proved they will wage a war if it takes 20 years to win, or 200 years.

The Siege of Vienna in 1683 lasted from July 17 to September 12. It was the battle between the Holy Roman Empire and the Ottoman Empire that would determine the future of Europe and the West.

Following the Crusades, the Ottoman Empire began expanding around 1300 and reached its zenith in the 1500s. The empire spanned from Oran in northwest Africa to the Persian Gulf, with the capital at Constantinople (captured in 1423). Byzantium was the first to be consumed, and then Serbia, Greece, Albania and Hungary in turn. By the middle of the 16th century, Suleiman the Magnificent was driving northward through the Danube Valley and reached Vienna in 1529. He was defeated, but the Ottomans would make one final push in 1683 to capture Vienna, the heart of the Holy Roman Empire.

During the Ottoman ascent, Europe languished under Catholic control and from internal conflict. Technologically inferior and numerically decimated by the bubonic plague, Europe could not defeat the Islamic advance unless they were united, Pope Pius ii warned, saying: “Who will unite the Genoese and the Aragonese? Who will reconcile the Germans with the Hungarians and Bohemians? If you lead a small army against the Turks you will easily be overcome; if a large one it will soon fall into confusion.”

Holy Roman Emperor Charles v responded to the Turkish threat and, as the archduke of Austria, was most concerned with the protection of Vienna. Charles v, in alliance with the pope, used the Islamic threat to expand the empire’s power, familial land holdings, and influence in Eastern Europe. The Ottoman threat actually aided the rise of the Holy Roman Empire in Europe and helped solidify its power.

Leopold i ascended the Habsburg throne in 1658 as Holy Roman emperor and, prompted by Pope Innocent xi, launched a war against the now ailing Ottoman Empire in 1683. The Ottomans were able to push back against the Europeans and began a siege of Vienna. The Ottomans began to tunnel through the first defensive wall and were threatening the very city itself.

Innocent xi was able to persuade the Polish King John iii, or King Sobieski, the electors of Saxony and Bavaria, and 30 other Germans princes to create a relief army of 80,000 troops. The climactic battle was fought between September 11-12 and lasted 15 hours. Led by Charles of Lorraine and the Polish king, they swept away the Ottoman attackers. Some say it was the largest cavalry charge in history.

This was the closest Islam ever came to conquering the heart of Christian Europe, but the victory by the Holy Roman Empire and allies stopped the threat of conquest until our modern times. Afterward, Innocent xi made a Holy League including the Holy Roman Empire, Poland and Russia to drive the Muslims out of Europe.

Sept. 11, 1683, was a pivot point in Western civilization: Islam began its long descent in power, and Europe began its long and steady rise to power.

This history points to what the Bible prophesies will happen in the near future.

History is set to repeat itself again. The Bible says that there will be a clash between the resurrected Holy Roman Empire and an aggressive Islamic power, led by Iran, in the near future. Only this time the Europeans will not be on the defensive, they will be going on the offensive!

Daniel 11:40 prophesies “at the time of the end” the king of the south will “push” at the king of the north, who will respond with a ferocious attack. Mr. Flurry writes in his booklet The King of the South:

This king of the south is undoubtedly the Iran-led radical Muslims. …

Soon they will push at the king of the north, the so-called Holy Roman Empire—the same religious power that was behind the Crusades. And that push will surely revolve around Jerusalem.

Just 25 years ago, nobody could have even imagined two world powers coming out of the Middle East and Europe. But God knew exactly what would happen. Nobody but God could have inspired these prophecies. Everybody can see these two great powers today.

The disaster in Afghanistan has made this even more clear. On the 20th anniversary of 9/11 we see the rapid decline of America, we see an emboldened and victorious radical Islam, and a European continent in crisis, yearning for a strong leader to unite them.

This anniversary can be depressing, and indeed it is a bitter moment of reflection for Americans who love their country. However, we can have hope in these dark days. The Bible does prophesy terrible events to come to pass, but it also prophesies of the wonderfully bright future that comes afterward, when all mankind, including the 2,996 who died on Sept. 11, 2001, will have an opportunity to experience lasting peace and abundant joy.

To learn more about what the future portends, please read The King of the South and Germany and the Holy Roman Empire.