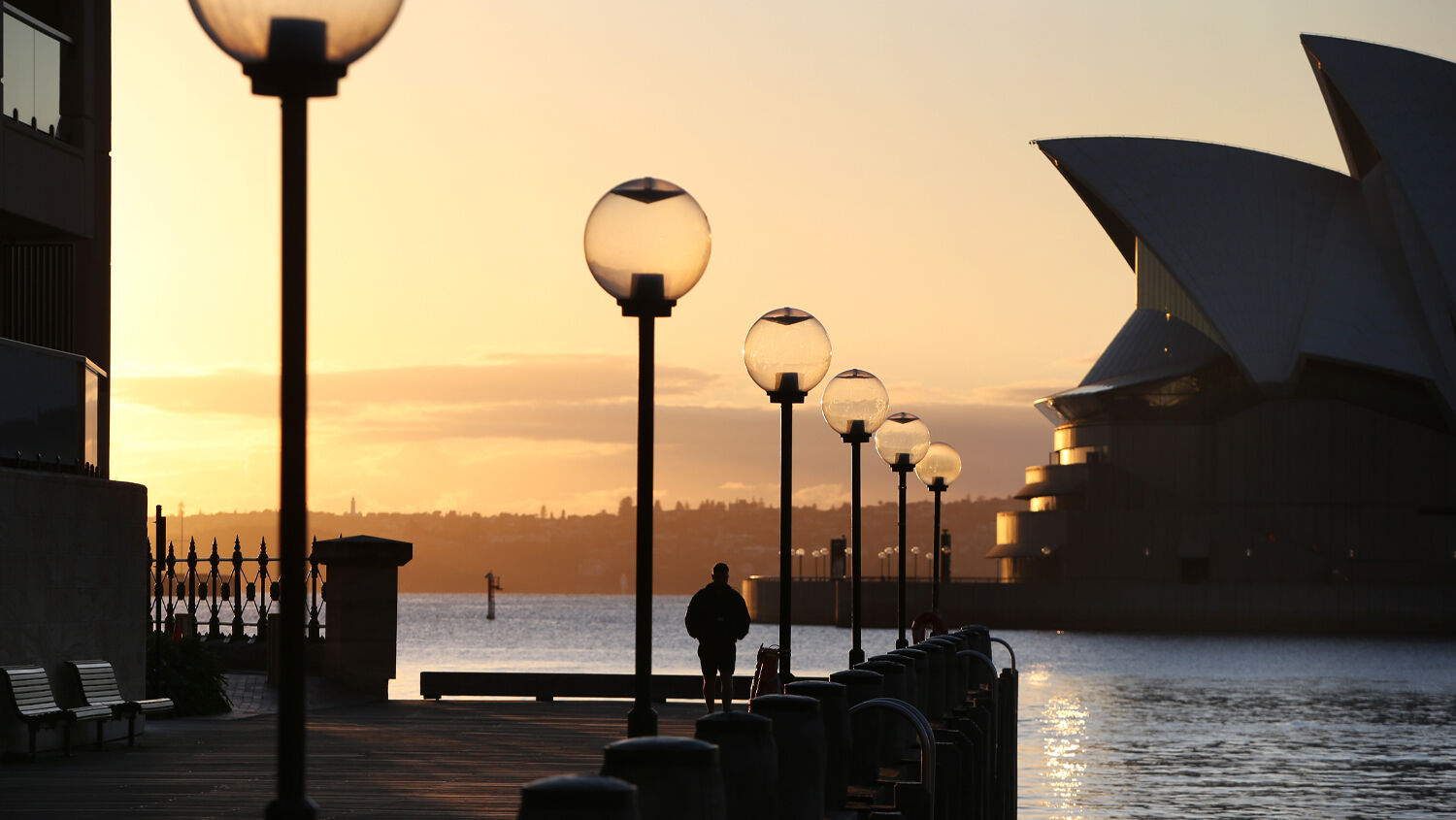 A person is seen exercising at sunrise in the foreground of the Sydney Opera House at Circular Quay on September 8, in Sydney, Australia.
Maree Williams/Getty Images

The slide toward authoritarianism

What has happened to Australia? The country synonymous with a laid-back lifestyle has undergone a hideous two-year transformation. The disfigurement leaves Australia looking a lot less democratic, and a whole lot more authoritarian.

Australia is going back to its 1788 history as a penal colony, isolated and cut off from the world. Today, the island is once again home to prisoners—25 million of them.

Australia’s first big step away from democracy came when international borders closed in March 2020. International arrivals have been limited ever since. The decision was made under the Biosecurity Act. In an emergency, the health minister is granted sweeping powers to prevent and control the arrival of diseases. When covid-19 arrived, the government was quick to test that power to its full potential.

All those arriving are subjected to two weeks of quarantine at their own expense, costing thousands of dollars. More troubling still, the government has banned most people from leaving. Australia has one of the harshest border policies in the world. By banning its own citizens from going to otherwise welcoming countries, Australia is taking a page out of North Korea’s book.

With the public safely contained, the government could turn its hand to the economy.

Australia’s covid-19 response has delivered a staggering blow to the economy. Repeated snap-lockdowns have decimated businesses and families alike. Often giving less than a day’s notice, state leaders are forcing businesses to lock down on the spot. Only businesses deemed “essential work” can remain open in such times. For many, these measures are unsustainable. The result is an unemployment rate that has risen to 5.5 percent.

Retail and hospitality have recorded an astounding 25 percent drop in income.

During the latest lockdown, the federal government paid families au$700 per week to cope with the effect of being confined to their homes. To put that in context, the average rent in Sydney is $520 per week. Meanwhile, the unelected “health officials” who advise the state governments continue to rake in $12,000 per week.

Between the loss of business and the government aid, the past two months have cost the government $17 billion. That represents a 2.5 percent hit to the gross domestic product in the September quarter. Sydney alone is bleeding out $1 billion per week.

Economists and politicians are quick to assure the public that the economic suicide will be well worth it. “We’ve avoided 48,000 deaths on a per capita basis compared to what’s gone on in other countries, so you have to keep all of this in perspective,” amp Capital chief economist Shane Oliver told the Sydney Morning Herald. This is the opposite of perspective.

Australia is a nation of 25 million people. Tens of thousands of families have had their savings obliterated. Countless businesses have been shut down for good. The elites who provide this “perspective” are not taking into account the debt future generations will be left with. Tens of thousands of lives are truly being destroyed.

To keep the broader nation on their side, the federal and state governments must continually barrage the public with facts and figures. Every state has its daily briefings, where the waiting journalists are peppered with “new hot spots,” “case numbers” and “new restrictions.” (The death toll is rarely mentioned since it is so low.)

The barrage of facts and misleading figures serves to normalize the increasingly deranged decisions made at the top levels of the Australian government. And the public seems blithely unaware—or at best accustomed—to the hysteria.

But just take a snapshot of recent comments and consider if Australians would have stood for such nonsense two years ago.

Victorian Premier Dan Andrews used his August 22 press conference to warn Australians of the risk of a sunny weekend: “Sunday is going to be quite a nice day, at home. … Otherwise, it will be lots of Sundays spent in hospital.” Such a statement two years ago would have garnered a deep belly laugh from Perth to Point Danger, but not anymore. We have become acclimatized to the madness.

The South Australian chief health officer warned that spectators shouldn’t catch a football kicked into the crowd lest they catch covid-19. You can’t sing karaoke, but you can sing at a wedding. You can eat in public, but it has to be sitting down.

Perhaps we could laugh if the ramifications were not so dire. But the lunacy takes an increasingly dark tone when it is backed by action.

Last week a rescue shelter in New South Wales shot all its dogs to prevent people traveling in to adopt them. A man who was videotaped sneezing in an elevator became the subject of a nationwide manhunt. Weddings, funerals, travel and other such vital and meaningful events in life are being limited or banned. Loved ones cannot visit a senior care facility or hospital without a jab. You can’t have guests in your house. Workplaces are moved from an office to home. Schools are either closed or kids must wear masks.

The daily interactions that mankind not only desires but needs are being curtailed. The mental and emotional damage to the national and individual psyche is evident in the spike in depression, anxiety, self-harm and suicide.

God makes an explicit warning to our leaders in the end time: “Woe to those who issue harsh decrees, penning orders that oppress, robbing the weak of their rights and defrauding the poor of their dues” (Isaiah 10:1; Moffatt translation). God will not sit idly by while a nation like Australia—which once knew God through its ties to the British Empire—carries on down such a path.

Australia keeps pushing on, driving a deep wedge into our communities. In states such as Queensland, mask wearing has become mandatory. A muffling barrier of light blue wherever you go is a good example of the barrier now forming in human relationships. The covid-19 crisis is, according to Joe Biden, “a crisis of the unvaccinated.” The mentality is very much the same in Australia.

As vaccination rates gradually rise, more pressure is being applied to those who have refused the jab. The federal government has promised not to make the jab mandatory. However, Canberra has given businesses the green light to fire people who refuse.

In the community, it is breeding an “us vs. them” mentality. The media is quick to stir the pot with a name-and-shame campaign. Lockdown violators are not just subjected to the iron fist of the law, but their lives are also plastered over the Internet. This happened two weeks ago with an “illegal” engagement party in Melbourne and a church group gathering in Sydney.

The bitter divide is only set to widen as communities are punished for their low vaccination and high infection rates.

As frustration mounts against the state and federal governments, protests have begun to spark. To quell the dissent and enforce their non-science, nonsense policies, the states are turning to overwhelming police force.

While most mainstream media refused to cover the story, videos have emerged of the heavy-handed response against unarmed lockdown protesters on the streets of Melbourne. More than 700 police descended on the protest, some on horseback and many more in full riot gear. With police helicopters overhead, the masked police forces fired rubber bullets, tear gas and pepper spray into the crowds.

In disturbing scenes last month, a 12-year-old girl was pepper-sprayed by police after she and her sister refused to wear a mask at a western Sydney shopping center.

In many of the lockdown cities, residents are limited to a 3-mile radius from their home. To enforce this, police are being taken away from other duties. Images of three or four police officers surrounding a sunbather or someone sitting alone on a park bench are becoming commonplace. One man of Polish descent told me his mother remembered having to carry papers to show the Nazis if you ever wanted to leave your own suburb. While Australia is no Nazi-Germany, there is no denying Australia is sliding down a path toward authoritarianism or even totalitarianism. And anyone who stands up against such measures is being shut down, shut up and shut in.

As the police clamp down, remember that since mid-July Australia has averaged roughly 1.5 covid deaths per day, in a country of 25 million people. In the words of Tucker Carlson, “That has been enough to justify the end of Australia and totalitarianism.”

As the nation continues to undergo its ghastly transformation, we are told by our political elites that there is cause for cheer. At 70 percent vaccination, we are assured the nation will unlock—maybe. Or when state health officials see lower numbers, they throw tidbits to the masses. For instance, last week New South Wales State Premier Gladys Berejiklian proclaimed that those who are vaccinated will receive a welcome reward; they can visit a hairdresser again. As if in some way this is good news in the light of all the aforementioned man-made catastrophe.

Australia is the perfect example of a nation being poisoned to death by its own cure.

Where is the hope? After all, in the nuclear age there are far more destructive forces than the coronavirus. The Bible is full of such warnings for us today. If Australia cannot handle covid-19, how can it stand up to a real threat like China? The truth is, there is no hope in man.

Notice what Herbert W. Armstrong, founder of the Worldwide Church of God, wrote in the January 1974 Plain Truth:

Man has demonstrated that he cannot rule himself. Unless there exists this divine Creator of all power—the God of love—who will now soon step in and intervene, and take the governing out of the hands of mankind, and govern all nations with His almighty divine power, humanity would soon destroy itself— erase all human life from Earth! But the Creator whom I serve will soon intervene and do just that. Mankind will resist. Mankind will fight against it, but God will save us from ourselves—and enforce the laws of the Kingdom of God, ruling all nations—forcing all mankind to enjoy peace, universal prosperity, happiness, and with the offer of eternal life available to all!

Right now, Australia and many nations in this world are learning the hard lesson that we need a new ruling government—God’s government. God alone has the means to bring about world utopia. He alone can bring you real freedom! Our world is not free. This world needs God. It needs the ultimate solution. If you want a glimpse into what that world is going to look like, request and read our free booklet The Wonderful World Tomorrow—What It Will Be Like. It is a reality, and it is coming soon.