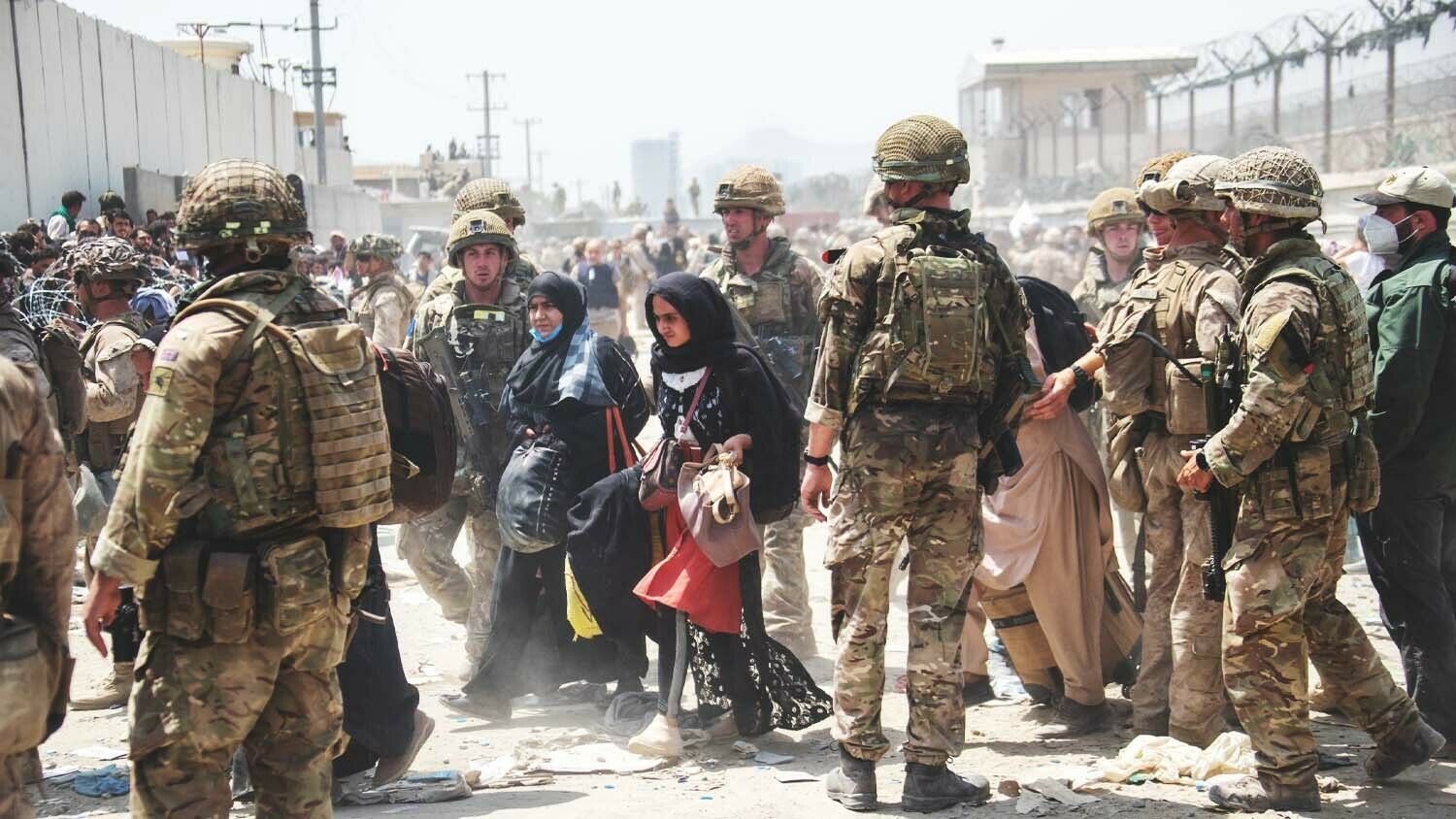 Eligible civilians and their families are evacuated out of Afghanistan on August 21 in Kabul.
MoD Crown Copyright/Getty Images

The American empire is dying. High gas prices, inflation, a border crisis—all compounded by the shameful exit from Afghanistan that is reverberating around the world.

For decades, the Trumpet has written that “America has won its last war.” Not only has it lost consecutive conflicts in Vietnam, Cambodia, Iraq, Iran and now Afghanistan, it has also developed a reputation for walking out on its allies.

The United States abandoned South Vietnam in the shameful Saigon evacuation in 1975. The withdrawal of forces from Iraq in 2011 precipitated the rise of the Islamic State. And now, within days of America’s hasty exit from Afghanistan, the Taliban has taken over.

What does this mean for the rest of the world?

The Chinese Communist Party’s news agency, the Global Times, is using the Afghanistan situation to advance China’s agenda in Taiwan. The Global Times wrote that America’s troop withdrawal dealt a “heavy blow to the credibility and reliability of the U.S.” This tendency of “abandoning allies to protect U.S. interests” is an “inherent flaw” in American foreign policy, it added.

Regarding Taiwan, Chinese President Xi Jinping said, “We do not promise to renounce the use of force and reserve the option to use all necessary measures.” He said this in 2019, before the American deterrent was as weak as it is now. With the fiasco in Afghanistan damaging America’s credibility, it’s just a matter of time until China takes Taiwan as its own.

The U.S. had committed troops to Afghanistan, and yet it left the region to the Taliban. It has made no such commitment to Taiwan. What’s to stop China from taking definitive action against Taiwan?

America’s allies clearly see its unreliability. And its enemies are relishing this reality.

“The point is, if the U.S. cannot even secure a victory in a rivalry with small countries,” the Global Times wrote, “how much better could it do in a major power game with China?”

The North Atlantic Treaty Organization will be asking the same question, as will Ukraine. As the American Conservative wrote: “We thought we were a hyper-competent humanitarian empire once. No longer.”

An old folktale titled “The Emperor’s New Clothes” describes America’s position well. The arrogant emperor has delusions of grandeur. He meets two swindlers who pose as weavers. They tell the emperor they have beautiful fabric that is invisible to the incompetent and the unworthy. Afraid of being considered an inadequate ruler, the emperor effuses about how beautiful the fabric is. His ministers and servants, just like the king, pretend they can see the fabric. The emperor made a great show of parading about town in his “new clothes.” Everyone was full of adulation, until one child pierced through the facade and declared that the emperor had nothing on at all. Slowly, everyone begins to admit they couldn’t see anything either. Yet the emperor, even knowing they were right, refused to admit that he was wrong, and continued on his parade, head held high.

So too, the Biden administration is unwilling to admit error. The Wall Street Journal has called the Afghanistan debacle Joe Biden’s “Neville Chamberlain moment.”

War in the South China Sea is much more likely. Taiwan’s days are numbered. And Russia will only be emboldened in the East European theater against nations such as Ukraine.

The existential problem is that America needs good leadership to right its ship but there is none.

Our federal bench is weak.

Biden is a corrupt old man. Impeachment is a long shot; VP Harris is an unpopular paperweight. The Legislature is a feckless cabal of empty suits.

America truly has no helper, as Trumpet editor in chief Gerald Flurry warned.

Journalists at cnn believe Taliban soldiers chanting “death to America” are “friendly at the same time.” Small and large nations alike are boldly disrespecting and scorn this once-great nation.

The New Yorker wrote regarding Afghanistan:

America’s standing abroad is profoundly weakened, symbolized by the U.S. Embassy’s lowering the Stars and Stripes for the final time on [August 15]. Smoke was seen rising from the grounds of the Embassy—which cost almost $800 million to expand just five years ago—as matériel was burned in the rush to exit. Washington will have a hard time mobilizing its allies to act in concert again—whether for the kind of broad and unified alliance, one of the largest in world history, that formed in Afghanistan after 9/11, or for the type of meager cobbled-together “coalition of the willing” for the war in Iraq. The United States is still the dominant power in the West, but largely by default. There aren’t many other powers or leaders offering alternatives. It’s hard to see how the United States salvages its reputation or position anytime soon.

What happened in Afghanistan has weakened America’s international standing. But this shameful demise was prophesied.

In Leviticus 26:19, God warns the nation of Israel that He would “break the pride of your power” as punishment for rejecting Him. Herbert W. Armstrong proved in The United States and Britain in Prophecy that America and Britain descended from ancient Israel. Therefore, Bible prophecies about Israel are chiefly about modern-day America and Britain.

In conflict after conflict, America has been embarrassed and forced out in shame. This is a curse on the nation. For rejecting God and His laws, America is a superpower in free fall. Other great powers are ready to take its place. And this too was prophesied.

Jesus Christ Himself prophesied of an era called the “times of the Gentiles” (Luke 21:24). Mr. Flurry explained in “What Are the Times of the Gentiles?” that those prophecies detail the conclusion of Israelite dominance and the rise of “the non-Israelite peoples” who “have started to take charge of the world right now.”

There is a reason God uses this terminology: Every leader of these Gentile kingdoms was under the sway of an evil spiritual influence—and came to have the mind of a wild, fierce beast! When such men attain power, they become cunning, ferocious beasts. Throughout history they have routinely thought like wild animals, wanting to conquer, pillage, burn and destroy.

As the U.S. falls in power, it is being replaced by leaders who act like wild, raging beasts!

God calls these leaders beasts for a reason! Yet people don’t believe God. Somehow, the leaders of Israel think our modern world has evolved beyond that evil nature. In reality, we haven’t even seen the most savage of these beasts! The worst times of the Gentiles are yet ahead of us! …

The big reason these powers are rising today traces back to the power vacuum created by America’s weakness—and the disappearance of America’s will.

These beastly powers prophesied in the Bible are rearing their heads. They are ready to take advantage of American weakness. Refugees so desperate to flee that they cling to an airplane as it takes off are a symbol of the times of Gentile dominance versus the rule of the nations of Israel.

But there is another empire on the horizon, a fifth empire that will destroy all earthly ones and rule in peace forever (Daniel 2:44).

“[God] will force us to learn the lesson that should be so obvious: Human beings are unfit and incapable of properly ruling over human beings,” Mr. Flurry wrote. “Only God can rule over men! And that is exactly what will happen: The glorified Jesus Christ is going to return and take over the literal government of all peoples and all nations. God’s other prophecies have happened: This prophecy will too.”

To learn more about these four beastly empires, and the fifth empire that will replace them all and rule in peace forever, request your free copy of Daniel—Unsealed at Last! by Gerald Flurry.