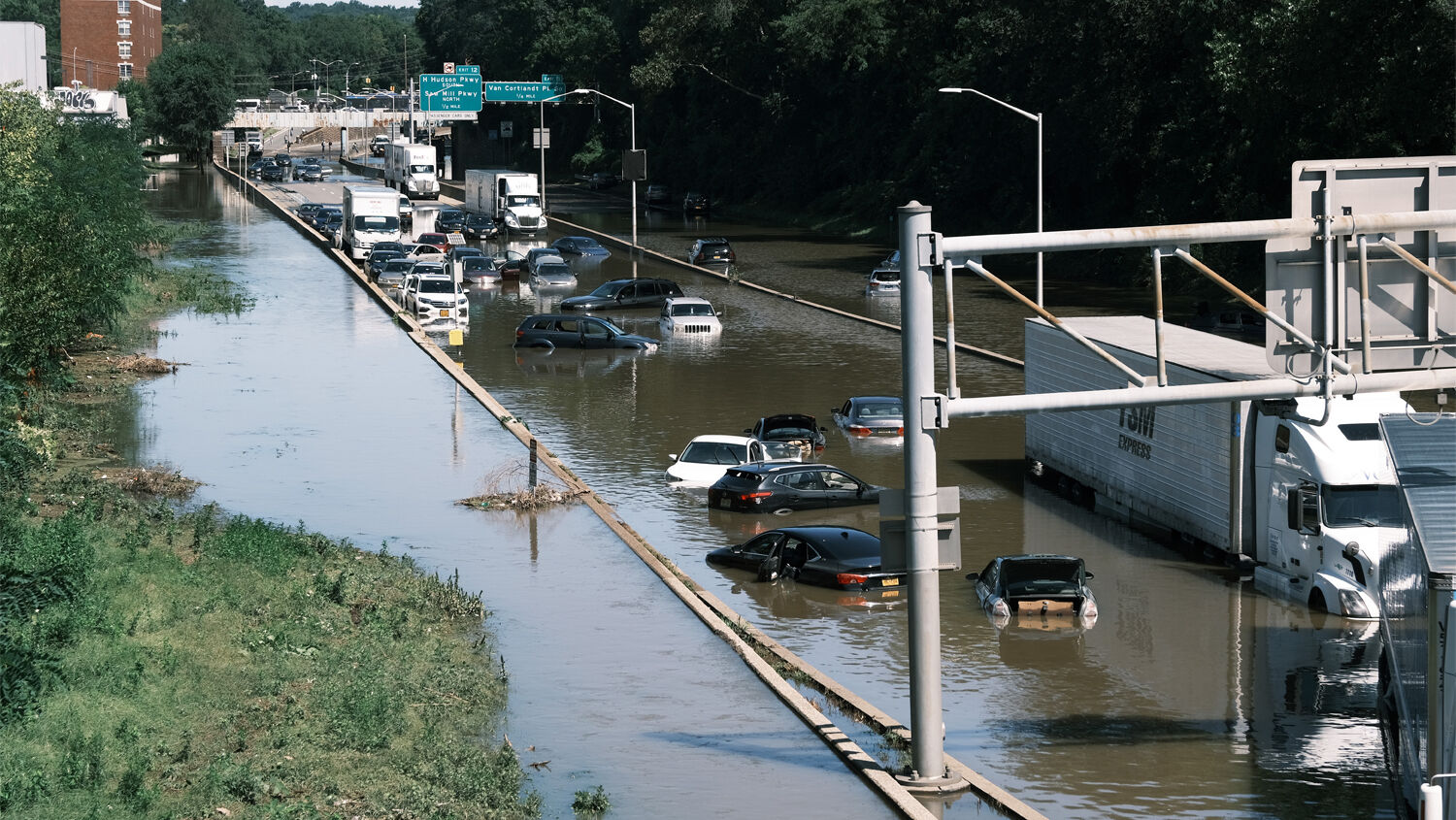 Cars sit abandoned on the flooded Major Deegan Expressway in the Bronx following a night of heavy wind and rain from the remnants of Hurricane Ida on September 02, in New York City.
Spencer Platt/Getty Images

The mainstream media relies on junk science to convince people that both droughts and floods are caused by rising atmospheric carbon dioxide.

As satellite imagery reveals the extent of the catastrophic flooding Hurricane Ida caused in New York and New Jersey, it is easy to forget that another explosive wildfire season is underway in California. Ever since Hurricane Ida made landfall in Louisiana on August 29, the news has been filled with imagery of streets flooded by torrential rains and houses destroyed by 150 mph winds. This storm left more than 1 million people without power in Louisiana before it moved inland and caused further flooding and storms across the eastern United States. And all this occurred while California’s second-largest wildfire ever recorded incinerated nearly 900,000 acres.

But does burning oil really cause catastrophes like Hurricane Ida and the Dixie fire? Almost every mainstream media outlet says “Yes,” but when you look at the actual data, Hurricane Ida is only the fifth-strongest hurricane to hit the U.S. mainland based on windspeed at landfall. The four stronger hurricanes were the Labor Day Hurricane of 1935, Hurricane Camille in 1969, Hurricane Andrew in 1992, and Hurricane Michael in 2018. Of these four hurricanes, the Labor Day Hurricane and Hurricane Andrew took place at times when the Earth was warming, but Hurricane Michael took place during a global warming pause and Hurricane Camille took place when the globe was cooling. Many scientists were warning of a new ice age when Camille made landfall in Mississippi.

The U.S. National Interagency Fire Center recently deleted all its data on the number of acres consumed in wildfires before 1983 because this data showed that out-of-control wildfires were worse 100 years ago than they are today. Government-funded scientists are ignoring evidence that carbon dioxide emissions do not cause natural disasters in an effort to convince people that the only way to stop natural disasters is to sign the Paris climate agreement, vote for the Green New Deal, and turn over control of the entire global economy to a socialist central-planning committee.

But such “solutions” will not make natural disasters less devastating. The oldest book in the Bible, the book of Job, states that God balances the vapors of the clouds and warms the Earth with a south wind (Job 37:16-17). He commands the clouds do His will, whether for mercy or for correction (verses 12-13).

Many climate scientists scoff at the notion that God controls the weather, but the south wind is warm because it comes from equatorial regions that are exposed to more direct sunlight. And new research published in the scientific journal Research in Astronomy and Astrophysics shows that the sun likely has a far more profound impact on the Earth’s temperature than human emissions of carbon dioxide. Job may have understood far more about the actual mechanism behind the Earth’s climate than the so-called scientists working with the United Nations Intergovernmental Panel on Climate Change.

The author of Psalm 148 also understood God’s power over the elements, writing: “Praise ye the Lord from the heavens: praise him in the heights. … Praise ye him, sun and moon: praise him, all ye stars of light. … Fire, and hail; snow, and vapour; stormy wind fulfilling his word” (verses 1, 3, 8).

This passage confirms that God controls the sun and balances the gases that compose the clouds. It also confirms that God sends fire and stormy winds to fulfill His promises and His prophecies. Among God’s promises are a promise to give “rain in due season” when His people obey Him (Leviticus 26:4). And among His prophecies is one about punishing end-time Israel for turning away from Him by sending rain on some cities until they flood and withholding it from others until they are parched (Amos 4:7).

The late Herbert W. Armstrong explained in his book The United States and Britain in Prophecy that the Anglo-Saxon peoples who settled the United States and Britain are descended from ancient Israel. America’s West Coast being consumed by wildfires at the same time its East Coast is being flooded is a fulfillment of Bible prophecy. God is doing everything He can to get America’s attention, but America’s leaders keep making up ever more elaborate explanations as to how natural disasters are not really sent by God but are the result of burning too much petroleum.

“The idea that carbon emissions cause storms is the antithesis of what God says,” Trumpet editor in chief Gerald Flurry wrote in “The Deadly Climate Change Deception.” “[I]n Amos 4:7, God says, ‘And also I have withholden the rain from you, when there were yet three months to the harvest: and I caused it to rain upon one city, and caused it not to rain upon another city: one piece was rained upon, and the piece whereupon it rained not withered.’ Here God is controlling the rainfall, causing floods and droughts! Why would He do that? Verse 8 answers: ‘So two or three cities wandered unto one city, to drink water; but they were not satisfied: yet have ye not returned unto me, saith the Lord.’ God causes these conditions as punishment for pushing Him out of our lives. These are prophecies for the near future. Many scriptures show that God rewards and protects those who put Him first.”

All the evidence shows that if everyone in America would look to God, the plagues would stop.

For information on what the Bible says about the nature-related phenomena making the headlines with troubling frequency, please request our free booklet Why ‘Natural’ Disasters?