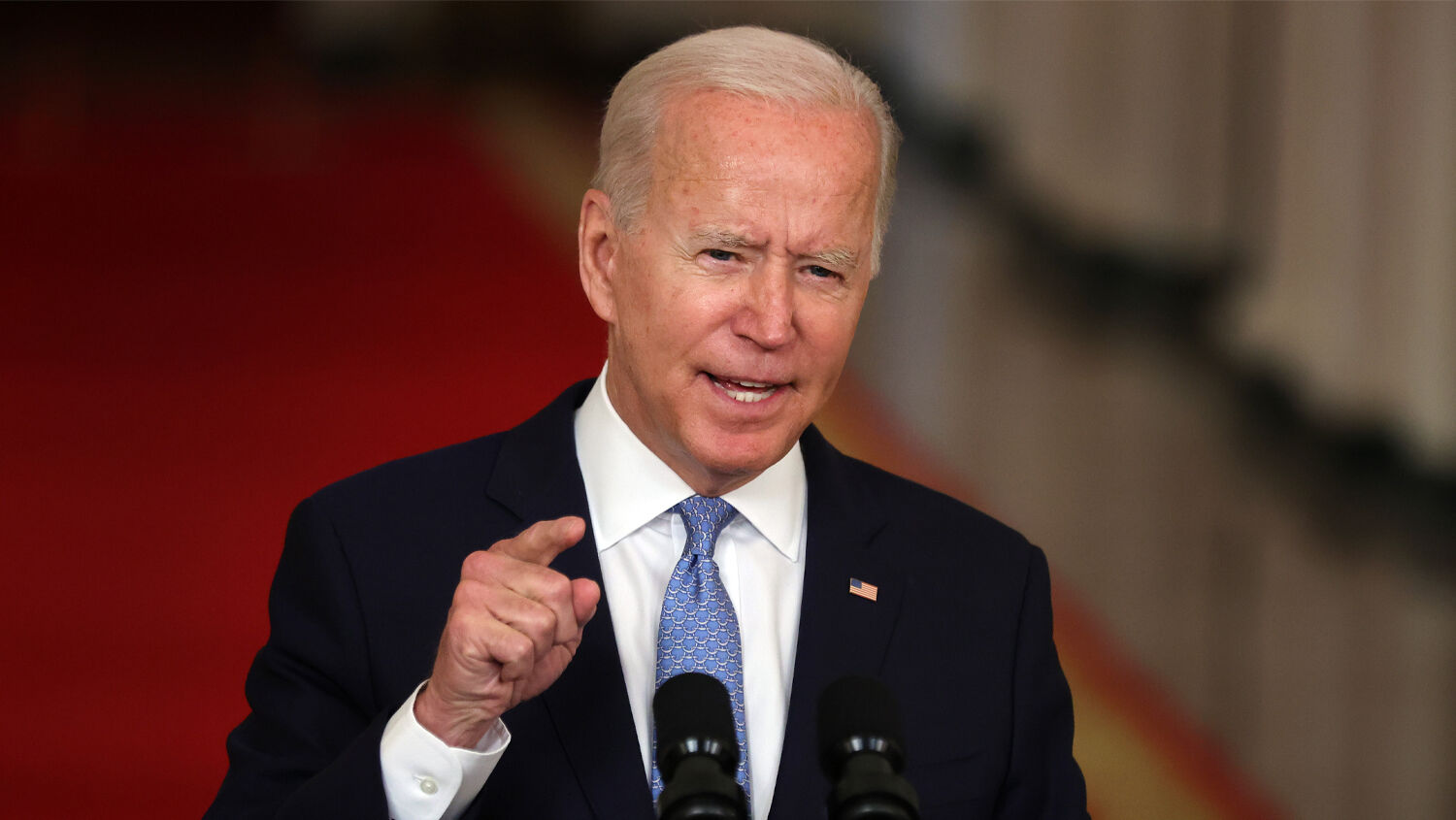 President Joe Biden delivers remarks on the end of the war in Afghanistan in the State Dining Room at the White House on August 31, in Washington, DC.
Chip Somodevilla/Getty Images

Of all the plagues in today’s world, one of the greatest is the arrogance of our leaders. You see it in their handling of the coronavirus pandemic, in America’s disastrous evacuation of Afghanistan, in crisis after crisis. Despite making major and even fatal errors, our leaders simply will not acknowledge their mistakes.

Evidence is piling up that our leaders have been wrong on coronavirus in a huge way. Yet governments act like they couldn’t be more right. They are doubling down on confronting people, fining people, arresting people, closing businesses, decimating the middle class. Two states in Australia have locked down their entire populations on account of only one covid-19 case each. For the crime of choosing not to get vaccinated, people are getting fired and will likely be denied not only legal remedy but even unemployment benefits (a stark contrast to the mountains of money governments have thrown at the unemployed in the past 18 months). An Illinois judge abruptly asked a mother during a court hearing if she had been vaccinated. When she said no, the judge took her son and barred her from time with him until she gets the jab.

These are stunningly hubristic decisions. Elites now routinely issue draconian decrees and speak publicly like they are trying to bring naughty children to heel. They are unilaterally destroying free societies that took generations and countless sacrifices to build. They are imposing mandates that ignore and defy scientific evidence, they are denying children an education even though the young are at very little risk, they are restricting businesses into financial disaster, and they are forcing vaccines on people despite evidence that they don’t stop the spread of the virus and are themselves dangerous—even fatally so. And often they secretly (or blatantly) break the rules they subject millions of people to.

These leaders are creating a wasteful, dangerous, unjust, corrupt mess. Yet in the face of clear evidence, they carry on, undeterred. This is arrogance on an epic scale.

What would it take for these people to acknowledge that what they have done is disastrous? The train is careening off the tracks, and they keep accelerating.

Their arrogance has made them uncorrectable.

“Read what the Bible says about knowledge and so-called experts,” Trumpet executive editor Stephen Flurry asked in our last Trumpet issue, “and ask yourself if it doesn’t perfectly describe the intellectual arrogance motivating the authoritarian scientific regime increasingly dominating our society.”

Isaiah 10:1 prophesies of leaders who prescribe grievousness. And anyone who resists, they attack, they fire, they arrest, they silence. They don’t care about the efficacy of their policies or the suffering of their people. They just want compliance.

As verse 2 describes, many are deeply suffering, yet the elites still enjoy their luxuries, their four-star dinners, their hair salon appointments and extravagant birthday parties. Since they are “sophisticated vaccinated people” crusading against nonvaccinated philistines, they believe they are above reproach.

God pinpoints their core attitude and warns that judgment is coming! (see verses 3-6). These terrible decisions have an enormous cost. The sins of our leaders, and of all our people, will catch up with us.

We tend to think that power comes from wealth, technology and weapons, but America has all of that, and it is losing its power.

In his article “Decadence & Hubris Have Finally Brought Down the American Empire,” Allister Heath wrote, “No empire is eternal: all eventually fall amid hubris and humiliation. The heart-wrenching, humanitarian calamity that is the botched Afghan retreat is merely the latest sign that the American era is ending: Washington is no longer the world’s policeman, and an unsettling future of clashes between expansionist, authoritarian regional powers beckons” (Telegraph, August 18).

Hubris is an excellent description. It means exaggerated pride or self-confidence. This sin is surely and rapidly destroying America’s power.

But the future—dominated by “clashes between expansionist, authoritarian regional powers”—will be far worse than merely “unsettling.” The Bible prophesies that the fall of America and the rise of the nightmarish “times of the Gentiles” is upon us. It prophesies that the result is about to be cataclysmic, “great tribulation,” unprecedented in the history of the world.

“Twenty years on, America’s global plan lies in ruins, its elites confounded on almost every issue, the stupidity and incompetence on display over the Afghan withdrawal confirming that they don’t understand the rest of the world, and aren’t fit to govern their own country, let alone the globe” (ibid).

With disasters compounding upon disasters, you would think our leaders would display some contrition, certainly for something like the Afghanistan fiasco. Yet they insist that they made the best decisions possible.

Proverbs 6 says, “These six things doth the Lord hate: yea, seven are an abomination unto him: A proud look, a lying tongue, and hands that shed innocent blood, An heart that deviseth wicked imaginations, feet that be swift in running to mischief, A false witness that speaketh lies, and he that soweth discord among brethren.” God hates our pride, our deceit. He hates how we invent things out of our wicked hearts that inflict suffering on others. He hates people stirring up divisions between other people.

“The fear of the Lord is to hate evil: pride, and arrogancy, and the evil way, and the froward mouth, do I hate” (Proverbs 8:13). Yet these abominations of pride and arrogancy are defining characteristics of our domestic and foreign policy today.

God warns us in Proverbs 16:18 of cause and effect: Pride always leads to destruction.

What would it take for people to acknowledge their errors?

These problems are the poisonous products of our educational system. And as Herbert W. Armstrong often explained, modern education is now entirely materialistic. It denies revelation from God and the very existence of God. That leaves the human mind as supreme authority in the universe, and it leaves men exalting their own reasoning above other men and above God. It leaves them taking power and putting themselves in the place of God.

And because they know best, they must control everything and everyone.

History is liberally populated by men who believed they had the solutions to the world’s problems and who took drastic actions to realize their vision. In fact, this Earth is stained with the blood of millions of people who got in the way of men’s grand visions for peace!

Whitaker Chambers, who had previously been an ardent communist, wrote that this ideology wasn’t new. “It is, in fact, man’s second-oldest faith,” he wrote. “Its promise was whispered in the first days of the Creation under the Tree of the Knowledge of Good and Evil: ‘Ye shall be as gods.’ It is the great alternative faith of mankind. … The Communist vision is the vision of Man without God. It is the vision of man’s mind displacing God as the creative intelligence of the world.”

Joseph Stalin didn’t have a goal to become a murderous dictator. His goal was to create a peaceful, universally prosperous world. His goal was so strong and he was so convinced he was right about it that he was compelled to eliminate people who resisted. And so he did—to the tune of some 20 to 60 million victims.

John Adams was a leader of men, but his perspective was more grounded. He said, “Power always thinks it has a great soul and vast views beyond the comprehension of the weak and that it is doing God’s service when it is violating all His laws.”

Examples abound of people who lead governments, industries, businesses, schools, even families—who, in pursuit of making things right according to their own definition of what is right, destroy lives.

Why are human beings so drastically illogically, self-destructively inclined? Where does this thinking come from?

It came from a being who was living in an awesome, peaceful, perfect, God-governed environment—but who became convinced in his own mind that he had a better way. Lucifer’s efforts to make things better based on his own ideas resulted in universal catalysm!

Isaiah 14:13-14 shows Satan to be the most arrogant being in the universe. In spite of all his deceit, sabotage and murder, he remains deeply impressed with himself. Everything he has done has led to destruction, yet he still thinks he’s right. Evidence to the contrary is screaming in his face while he stubbornly clings to his belief that his way is better than God’s.

His malevolent influence saturates our world. It is particularly rife among the elites and decision-makers. But it is an attitude that Satan has infected all human beings with to some degree.

When you exalt your own reasoning, you are doing what Adam and Eve did and what Lucifer did before them. And just as he manipulated them, he manipulates you.

This attitude is more dangerous than Joe Biden or Barack Obama or the Taliban or China. And it is impossible to cure—without God.

The Apostle James wrote, “God resisteth the proud, but giveth grace unto the humble. Submit yourselves therefore to God. Resist the devil, and he will flee from you. Draw nigh to God, and he will draw nigh to you. Cleanse your hands, ye sinners; and purify your hearts, ye double minded. Be afflicted, and mourn, and weep: let your laughter be turned to mourning, and your joy to heaviness. Humble yourselves in the sight of the Lord, and he shall lift you up” (James 4:6-10).

Here is your hope!

This is a hope not just for peace of mind, not just for escaping the hubris and insanity of this world, but the hope of new elites and a new world government. God is training even now people who will listen, people who will admit mistakes, people who will repent, people who will believe and obey His law of showing love toward others. He is showing them and the whole world inescapable proof that man cannot rule over man, that human reasoning is fatally flawed.

This is a colossal lesson to take from the debacles happening all around us. When you realize what is needed, and how God is bringing it about, it totally changes how you pray “Thy kingdom come.”