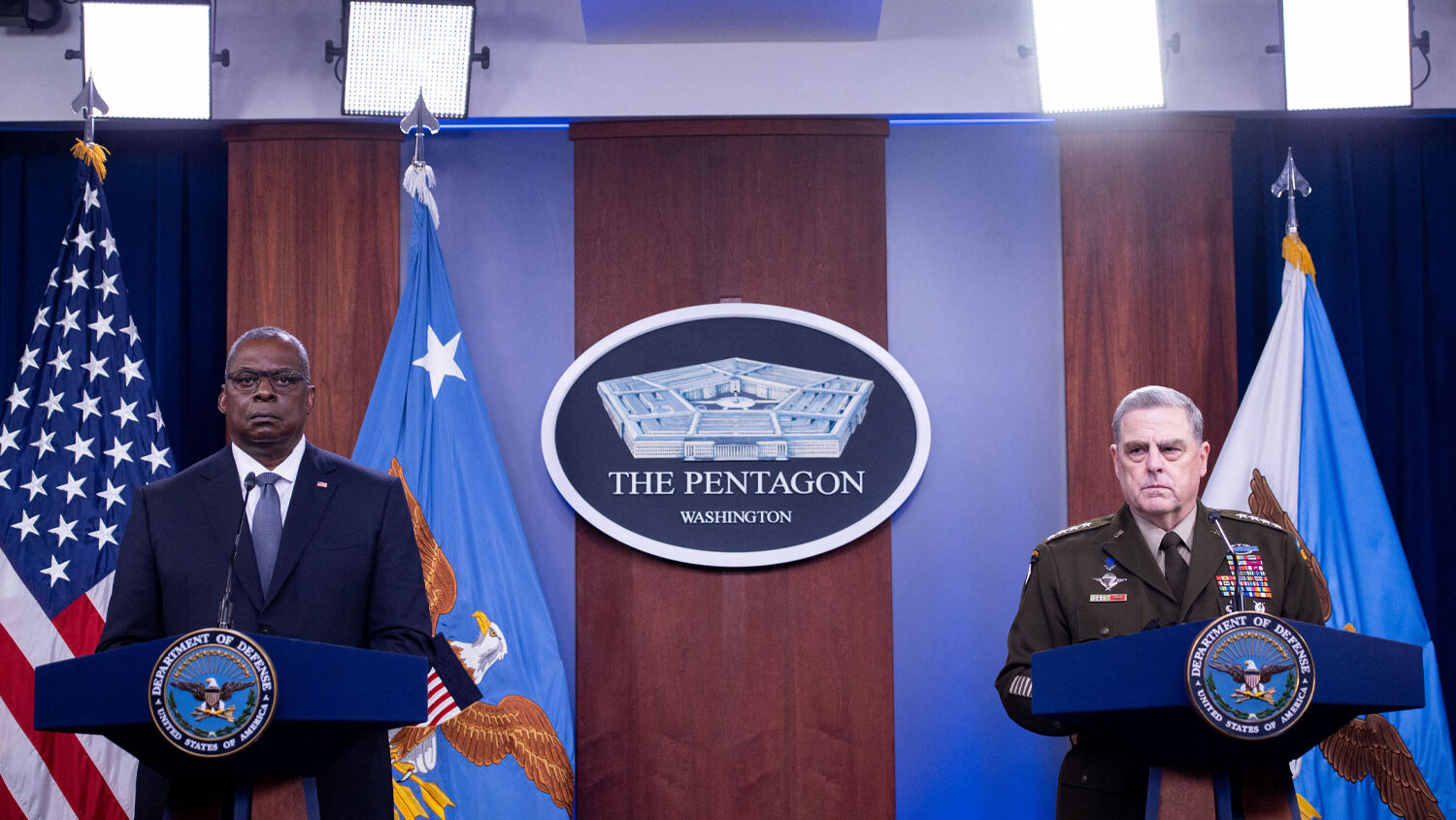 U.S. Secretary of Defense Lloyd Austin iii and Army Gen. Mark Milley, Chairman of the Joint Chiefs of Staff, hold a press briefing about the U.S. military drawdown in Afghanistan, at the Pentagon in Washington, D.C.
SAUL LOEB/AFP via Getty Images

Nearly two dozen Republicans in Congress have called for Joe Biden to resign or be removed from office for his shameful and unnecessarily disastrous retreat from Afghanistan. And according to a group of 87 retired United States military generals and admirals, Biden is not the only person who should resign. On August 31, these flag officers posted an open letter online calling for the resignation of Defense Secretary Lloyd Austin and Joint Chiefs of Staff Chairman Gen. Mark Milley.

“The retired flag officers signing this letter are calling for the resignation and retirement of the Secretary of Defense (secdef) and the Chairman of the Joint Chiefs of Staff (cjcs) based on negligence in performing their duties primarily involving events surrounding the disastrous withdrawal from Afghanistan. … As principal military advisers to the [president], the [secretary] and [chairman] should have recommended against this dangerous withdrawal in the strongest possible terms. If they did not do everything within their authority to stop the hasty withdrawal, they should resign. Conversely, if they did do everything within their ability to persuade the [president] to not hastily exit the country without ensuring the safety of our citizens and Afghans loyal to America, then they should have resigned in protest as a matter of conscience and public statement.”

This letter noted how “catastrophic” it is to have weapons falling into the hands of the Taliban. And it explained how the Biden administration’s weakness would embolden America’s adversaries.

Secretary Austin and General Milley will almost assuredly ignore this letter, as it is not the first time this group of retired generals and admirals have criticized the Biden administration. On May 10, the “Flag Officers 4 America” published another open letter, warning, “We are in a fight for our survival as a constitutional republic like no other time since our founding in 1776. The conflict is between supporters of socialism and Marxism versus supporters of constitutional freedom and liberty.”

From election fraud to collaboration with Communist China to the dangerous Iran nuclear deal to illegal immigration of the U.S.-Mexico border, these flag officers detailed many ways the Biden administration is destroying America. They warned that “our country has taken a hard left turn toward socialism and a Marxist form of tyrannical government which must be countered now by electing congressional and presidential candidates who will always act to defend our constitutional republic. The survival of our nation and its cherished freedoms, liberty and historic values are at stake.”

When you read these open letters, it becomes evident that the flag officers’ outlook is precisely opposite from the “woke” perspective of Biden’s Joint Chiefs of Staff. This indicates that there are deep divisions in America’s military. The Biden administration realized this. That is why Defense Secretary Austin has hired critical race theorist Bishop Garrison as the Pentagon’s extremism czar, tasked with purging those who think like the “Flag Officers 4 America” from the ranks.

The Biden administration plans to cleanse the military of Trump supporters and transform it into a “Praetorian Guard” used to protect Washington elites from the American people. But the consequence is likely to be war. As the Biden administration kicks the conservatives out of the military, it will become more Marxist and the pool of officers that militia groups can recruit will also grow.

America is bitterly divided. Analysts are discussing the possibility of civil war, and one Georgetown University poll showed that two thirds of Americans believe the nation is “on the edge of civil war.”

Think about that for a moment. The Civil War took 620,000 American lives, about 2 percent of the nation’s population, and more deaths than all other American wars, from the American Revolution to the Korean War, combined. Could America be on the verge of another such catastrophe? Many analysts say a conflict as devastating as the Civil War could not happen to the U.S. again because the military would quickly put down the rebellion. But the Afghanistan debacle reveals that the military is just as divided as the rest of society. An armed conflict between “supporters of socialism” and “supporters of constitutional freedom” would likely rip the military into hostile, warring factions.

Herbert W. Armstrong explained in his landmark book The United States and Britain in Prophecy that the Anglo-Saxon peoples who settled the United States and Britain are descended from ancient Israel. This means the Bible’s end-time prophecies concerning Israel are directed at America and Britain. In one prophecy in Ezekiel 5, God reveals that one third of the population of end-time Israel will die from pestilence, famine and violence. “And I will do in thee that which I have not done, and whereunto I will not do any more the like, because of all thine abominations. … A third part of thee shall die with the pestilence, and with famine shall they be consumed in the midst of thee …” (verses 9, 12).

This prophecy means more than 100 million people will die in rioting and warfare in the United States. (For proof, request your free copy of Ezekiel—The End-Time Prophet, by Trumpet editor in chief Gerald Flurry.) Logistically, it takes a lot more than Antifa riots or Black Lives Matter protests to achieve this kind of death toll. It takes a Bolshevik-style revolution backed up with massive military firepower on both sides. You can see the fault lines of such a seismic conflict forming.

Civil War President Abraham Lincoln stated, “All the armies of Europe, Asia and Africa combined, with all the treasure of the Earth (our own excepted) in their military chest, with a Bonaparte for a commander, could not by force take a drink from the Ohio or make a track on the Blue Ridge in a trial of a thousand years. … If destruction be our lot, we must ourselves be its author and finisher. As a nation of freemen, we must live through all time or die by suicide.”

History shows that when a nation falls into division and infighting, it quickly becomes consumed by internal crises that leave it vulnerable to attack. This is what God prophesies will happen to America. Unless people wake up and repent, communism will weaken and divide America to the point where a modern-day Bonaparte will have little trouble invading the nations and finishing the job we have started!

For more information on what the Bible says about a second civil war in America, please read our article “American Bolsheviks” and request a free copy of Great Again, by Gerald Flurry.