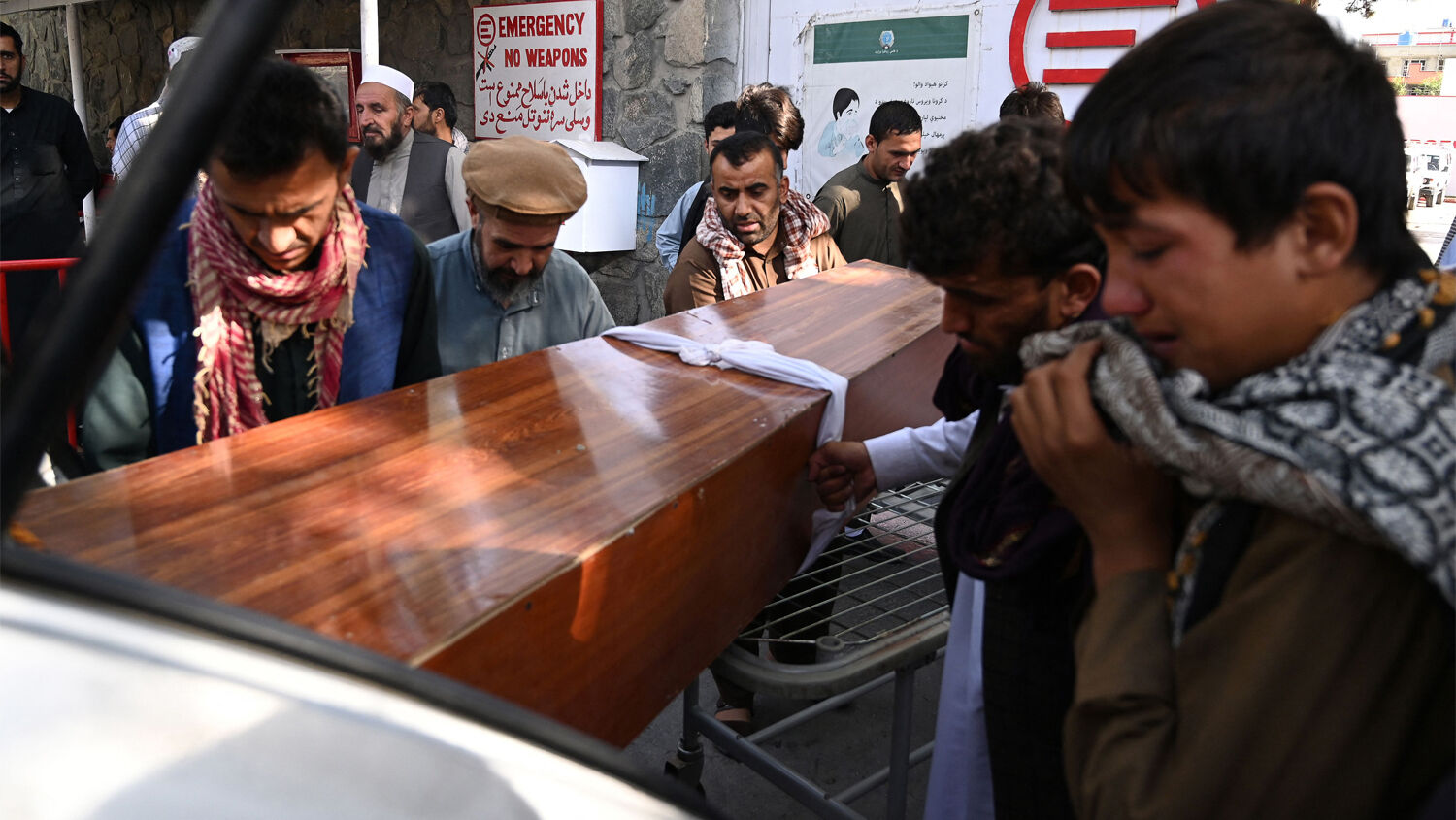 Relatives load the coffin of a victim of the August 26 suicide bomb attacks in Kabul.
AAMIR QURESHI/AFP via Getty Images

A parting shot from the jihadists as America packs its bags

Over a hundred people were killed in a mass terrorist attack in Kabul on August 26. A suicide bomb went off at Kabul international airport’s Abbey Gate. This was immediately followed by an attack on the airport by gunmen. Soon after, another bomb exploded at a hotel outside of the airport.

The attack adds to the humiliation unfolding in Afghanistan, as the United States is chased from the Kabul airport by a terrorist group.

Ninety Afghans and at least 13 United States service members were killed in the attack, and another 18 service members were injured. This makes August 26 the deadliest day of America’s War in Afghanistan since 2011. And it happened less than a week before the August 31 deadline U.S. President Joe Biden has given for American military evacuations to be completed.

The Islamic State’s Afghanistan affiliate, isis-k, took responsibility for the attack. British Armed Forces Minister James Heappey stated earlier in the day that there was “very, very credible” intelligence the Islamic State was preparing something.

Since the Taliban took over Afghanistan earlier this month, Abbey Gate has been a choke point for Afghans desperate to escape Taliban rule. This contributed to the high death toll.

“People were burning alive, people could not breathe,” said one eyewitness.

“Those who arrived could not speak, many were terrified, their eyes totally lost in emptiness, their gaze blank,” said a medical coordinator in Kabul. “Rarely have we seen such a situation.”

Biden promised retribution against the Islamic State. “We will hunt you down and make you pay,” he said in a speech at the White House.

He had also claimed the U.S. Afghan withdrawal would be orderly and that the Afghan military was capable of defending itself. Both those claims have proved false. So it remains to be seen how seriously this “hunt” will be carried out.

Following the attack, a new narrative is emerging from the media: The Islamic State is no friend of the Taliban. It was formed by disgruntled Taliban members six years ago and has waged war against them since. But an old proverb says that “the enemy of my enemy is my friend.” What happens when the enemy of America’s enemy is the Taliban?

As the Washington Post wrote, “The shared isis-k threat between the Taliban and the United States has turned the two enemies into temporary security partners after 20 years of combat.” The attack is being used to paint the Taliban as the good guys—despite their well-documented atrocities, even in recent days. It disguises the fact that America is looking to a terrorist group for mercy.

Taliban spokesman Suhail Shaheen denounced the attack on Twitter. “The Islamic Emirate strongly condemns the bombing of civilians at Kabul airport, which took place in an area where U.S. forces are responsible for security.”

A Taliban representative told the Post that they have “launched an investigation to know the nature of the blasts and why it happened.” General McKenzie stated that U.S. forces are cooperating with the Taliban regarding security. “We’re doing everything we can to be prepared for those attacks,” he said. “That includes reaching out to the Taliban who are actually providing the outer security cordon around the airfield and make sure they know what we expect them to do is protect us.”

In 2001, the United States entered Afghanistan to go after the regime that harbored al Qaeda and the perpetrators of the 9/11 terrorist attacks. The Taliban were evicted from power and a democracy was installed. At its peak, the U.S. military had well over 100,000 troops in Afghanistan. Shortly after the U.S.-led invasion, the cover of Time read, “The last days of the Taliban.”

Fast-forward 20 years. Not only did the United States not beat the Taliban, not only did Washington order a full-scale retreat, not only were the Taliban able to topple the Afghan government while U.S. troops were still around—now the situation has deteriorated to the point where America is relying on the Taliban to investigate the murder of American soldiers. Now the U.S. military is looking to the Taliban as essentially their bodyguards. The army that once defeated Hitler and Tojo is now at the mercy of a ragtag group of mountain men.

Herbert W. Armstrong, editor in chief of our predecessor magazine, the Plain Truth, had a lot to say about the decline of America’s military. He lived through America’s victory in World War ii. He also lived to cover America’s defeats in the Korean War, the Bay of Pigs invasion and the Vietnam War—far smaller conflicts that the U.S. should have dominated in easily.

Here is what he wrote for the October 1961 issue of the Plain Truth, covering the Bay of Pigs fiasco:

Unless or until the United States as a whole repents and returns to what has become a hollow slogan on its dollars: “In God we trust,” the United States of America has won its last war! I said that when we failed to win in Korea! I have said it as we have lost every round of the Cold War with Russia! I say it again, now that the United States government endorsed this Cuban fiasco—and God, the God America has deserted—gave it its most humiliating defeat! What does the Cuban debacle mean? It means, Mr. and Mrs. United States, that the handwriting is on your wall!

That forecast has been true in every major conflict America has gotten into since 1961. It was true for Vietnam, for Iraq, for Libya and now for Afghanistan.

Mr. Armstrong based his forecast on Bible prophecy. As he proved in his book The United States and Britain in Prophecy, the United States is descended from the ancient Israelites. In fact, its unparalleled ascent to world power and prosperity is because of a promise God made to the patriarch Abraham, the Israelites’ ancestor, that he would father of “a great nation” (Genesis 12:1-3).

God also promised the Israelites that if they disobeyed Him, He would bring curses on them. One of those curses is listed in Leviticus 26:19: “And I will break the pride of your power.”

America today has a lot of military power. But it has no pride to use it. The Afghanistan debacle is one of the biggest examples of this. And it is a direct fulfillment of the prophecy in Leviticus.

Again, what does this mean?

As Mr. Armstrong put it, the handwriting is on the United States’ wall.