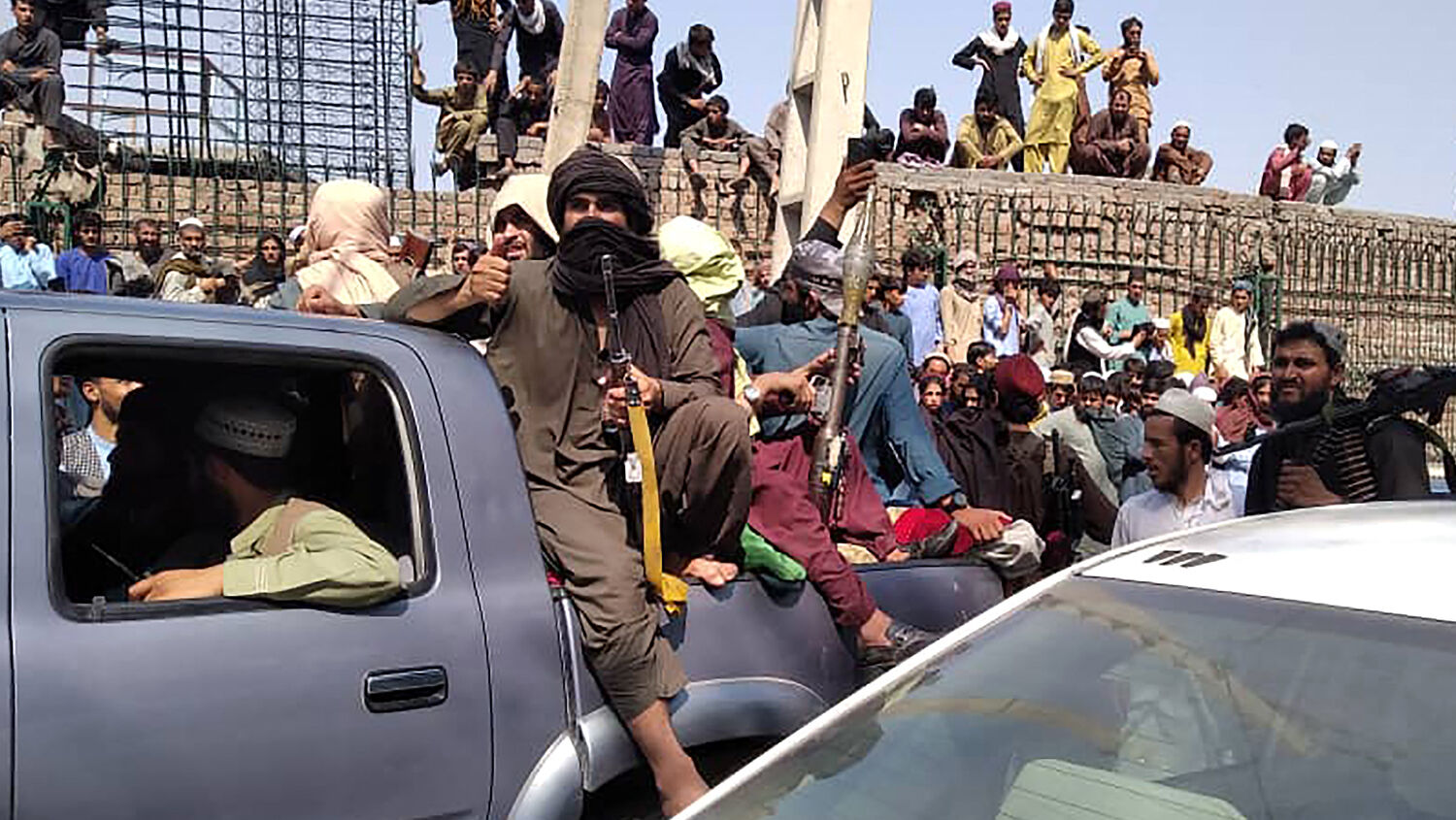 Taliban fighters sit on a vehicle along the street in Jalalabad province on August 15.
AFP via Getty Images

This shameful departure from Afghanistan is agonizing for Americans. It is embarrassing to flee from a menagerie of Third World terrorists. It is humiliating to be told by the Taliban that we must vacate by August 31 or face consequences—and for the White House to weakly submit. It is insulting to hear the barefaced lies from this administration: that other nations support our withdrawal, that Americans are having no trouble reaching the airport, that the Taliban have reformed, that al Qaeda is no longer a threat, that we accomplished our mission in Afghanistan. It is painful to watch the world gloat over America’s hasty and ugly retreat.

Americans are ashamed and angry at how this was handled. But the truth is, even Joe Biden’s political foes agree with him on the basic premise: that we needed to get out. With Americans today, stationing troops in foreign countries is not popular.

This wasn’t so in previous generations. After the Second World War, the United States established a military presence in 3 out of 4 countries on the planet. The most widely deployed nation in history, it oversaw Pax Americana—the relative world peace that has prevailed in the Western world since World War ii. There have been no full-scale wars between major powers. The number of battle deaths per capita has been at a historic low.

Demands to withdraw from Bagram, Kandahar and Helmand province have been far more strident than they have to bring our boys home from Okinawa and Iwakuni, Ramstein and Bavaria, Kunsan and Osan, Incirlik, Stavanger, Guantanamo, or any other of the more than a thousand American bases, forts, annexes, installations, embassies and missions worldwide. But the trend line is clear. A growing number of Americans don’t really see the purpose in standing watch on foreign soil.

It’s not difficult to understand why. We are filling our public education curricula with the toxic message that the nation was founded on genocide, built by slavery, and sustained by racism and oppression. Many Americans disagree, but the “enlightened” masses emerging from our universities and filling our bureaucracies, legislatures, corporate desks and newsrooms view the notion that American influence could be positive as egotistical and imperious. In their values-relative world, who’s to say that the Taliban are any less deserving of sovereignty than the white males that dominate America?

America’s former confidence, patriotism and pride, borne of sense of purpose and destiny, have been supplanted by self-loathing. Why maintain a presence abroad when we don’t even believe in the cause for which the nation once stood?

America’s loss of prestige and identity is disheartening to a lot of people. But it has a definite cause, and one that very few understand.

Right now, many observers can explain what is happening—they can tell you just how far America has fallen and how fast—but they cannot explain the true cause. We see a lot of finger-pointing—at the president, the previous president, bad advisers, poor military leadership, a lack of foresight and planning. Yet all these problems are actually symptoms of a much more serious and elemental cause.

That cause is revealed with crystal clarity in the Bible. It explains exactly why America has lost its leadership role in the world. In fact, it explicitly foretold it. You can’t understand Afghanistan without understanding this.

Herbert W. Armstrong spelled out the biblical explanation in his book The United States and Britain in Prophecy. If you have not read this book—and even if you have—it is worth devoting the time to study in light of these recent events.

Speaking of the prophesied fall of these two nations that have dominated the world for decades, he wrote, “Do you think so great a fall could not come to so great powers as Britain and America? Do you say, ‘It can’t happen here?’ … You need to wake up to the fact that the United States, even still possessing unmatched power, is afraid—fears—to use it, just as God said: ‘I will break the pride of your power’; that the United States has stopped winning wars—that America was unable, with all its vast power, to conquer little North Vietnam! The United States is fast riding to the greatest fall that ever befell any nation! The handwriting is on the wall!”

Mr. Armstrong wrote these words in 1980. His reference to the humiliation of America’s defeat and retreat from Saigon in 1975 has now been eclipsed by the nightmare unfolding in Kabul.

Leviticus 26—from which Mr. Armstrong quoted—and Deuteronomy 28 are two crucial prophetic chapters that list the curses America would suffer if it rebelled against God. Ask yourself whether these are coming to pass: “But if ye will not hearken unto me, and will not do all these commandments … I also will do this unto you; I will even appoint over you terror …. And I will set my face against you, and ye shall be slain before your enemies: they that hate you shall reign over you; and ye shall flee when none pursueth you. … And I will break the pride of your power … And your strength shall be spent in vain …” (Leviticus 26:14, 16, 17, 19, 20). Consider the fear and weakness motivating American foreign policy. Consider the weaponry and military might the U.S. spent billions of dollars on that is now in the hands of the Taliban. Consider the terror among those who are suddenly American refugees. Consider the Americans slain before their enemies—all in vain.

“And thou shalt become an astonishment, a proverb, and a byword among all nations …” (Deuteronomy 28:37). Today, many are secretly or openly gleeful at the loss of American prestige.

Several times in these chapters God warns, If, in spite of all this, you don’t turn back to me, then the curses will intensify.

But even as Americans are sustaining grievous curses, nobody will even take responsibility, let alone hearken to God. Joe Biden repeatedly insists he has done everything right. His staff apparently feel they have handled this situation perfectly. They are watching thousands of stranded Americans, Afghans and other nationals shocked at their betrayal, they are seeing America’s international reputation in tatters—and in their minds, it all confirms the correctness of their decision. “So you don’t think … this exit could’ve been handled better in any way? No mistakes?” one reporter asked Biden. He responded, “No. … The idea that somehow there’s a way to have gotten out without chaos ensuing, I don’t know how that happens.” What would this man have to see for him to recognize he could have handled it better?

Hatred of admitting error is intrinsic to human nature. It matters not how much evidence accumulates nor how spectacular are the failures that they directly cause, nor how grievous the curses become. Human beings hate saying, “I was wrong.”

Isaiah 9 prophesies about our uncorrectable nations. It criticizes the leaders who “say in the pride and stoutness of heart, The bricks are fallen down, but we will build with hewn stones: the sycomores are cut down, but we will change them into cedars” (verses 9-10). Even as punishment from God escalates, we keep trying to solve our problems any way possible—as long as it does not entail humbling ourselves toward God. “For the people turneth not unto him that smiteth them, neither do they seek the Lord of hosts” (verse 13).

Many people are angry with Joe Biden right now. But this is a national sin. Everyone seems to think that the problem is with someone else. Yet America is being hammered by all manner of curses—economic curses, health curses, immigration curses, weather curses. Recognize these curses for what they are: punishment from God! God is cursing us for our sins: pride, arrogance, godlessness, family breakdown, immorality and lust, materialism, greed, idolatry, hatred and violence. Our mass-scale sins, in which everyone has a part, have consequences.

Those two “blessings and curses” chapters—and the whole Bible—show you the purpose behind punishments. God is correcting us to help us see our sins, and to turn us back to Him.

If we refuse to be corrected, then what is God to do?

The nations of Israel are guilty of worshiping money and other idols instead of the Creator God who has had a special relationship with them and their ancestors. “Their land also is full of idols; they worship the work of their own hands, that which their own fingers have made,” the Prophet Isaiah wrote. Then, he prophesied of God’s dramatic entrance (Isaiah 2:8, 10-12):

This is about the return of Jesus Christ to take over the literal government of all nations. He will first punish mankind, then put down all rebellion and shut down all this arrogance. Verses 17-19 say,

And the loftiness of man shall be bowed down, and the haughtiness of men shall be made low: and the Lord alone shall be exalted in that day. And the idols he shall utterly abolish. And they shall go into the holes of the rocks, and into the caves of the earth, for fear of the Lord, and for the glory of his majesty, when he ariseth to shake terribly the earth.

God will humble America’s leadership, and the American people, including the conservatives—as well as the Taliban and the nation’s gloating enemies. He will make all men realize how small and pitiful they are!

“God is going to take mankind to the point where people will know there is no hope in man and they are willing to heed God’s Word—the Bible,” writes Gerald Flurry in The Epistles of Peter—A Living Hope. “The experiment of human government will prove itself a grandiose failure, and people will begin to recognize that they do need God’s help. What a world that will be! When human arrogance has been leveled, people will be humble and childlike, ready to be taught by God! But to reach that stage, mankind must experience destruction just short of destroying all humanity—every man, woman and child.”

How about you? Will you need to receive greater and greater chastisement from God before you recognize how much you need Him? Or will you humble yourself before Him and allow yourself to be taught by Him—today?

What suffering you can be protected from, individually, if you will learn the lesson that America is collectively failing to learn today.