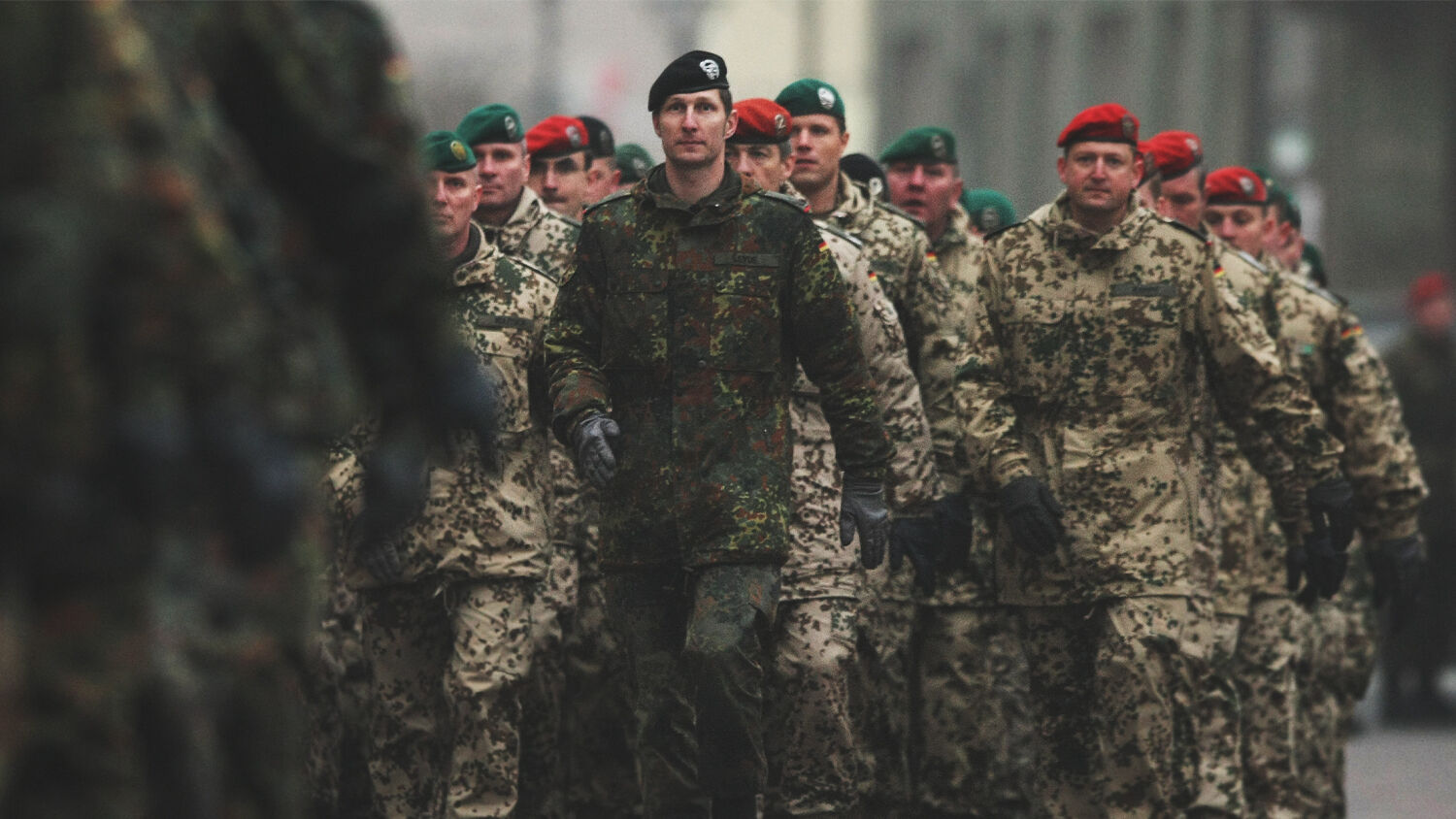 Soldiers of Tank Grenadier Brigade 37 of the German Bundeswehr arrive at a ceremony marking their deployment to Afghanistan in March 2009.
Sean Gallup/Getty Images

Calls for Germany to reawaken its military spirit are rising.

While the whole world is shaken by the Taliban’s takeover of Afghanistan, one region is particularly concerned: Europe. Another refugee crisis is looming; more terrorism can be expected. Many Europeans wonder if the Middle East will ever be safe without major military intervention. Germany, most of all, feels directly betrayed by America’s withdrawal.

Afghanistan had been Germany’s longest, most extensive military mission since World War ii. In February, the German government authorized the mission in Afghanistan to continue through Jan. 31, 2022, with up to 1,300 troops. But after Joe Biden announced in April that the United States military would vacate by September 11, Germany pulled out all of its troops.

Over the almost 20-year mission, Germany lost 60 soldiers in Afghanistan. Now Germany is watching as America’s weak leadership throws its efforts away. Chairman of the Bundeswehr Association André Wüstner called the situation in Afghanistan “shameful” and claimed that veterans would be “enormously furious.”

“The American president’s decision to allow Afghanistan to collapse into the arms of the Taliban has European officials worried he has unwittingly accelerated what his predecessor Donald Trump started: the degradation of the Western alliance and everything it is supposed to stand for in the world,” Politico noted on August 17.

France 24 reported: “European leaders said Monday they will press for a unified international approach to dealing with a Taliban government in Afghanistan, as they looked on with dismay at the rapid collapse of two decades of a U.S.-led Western campaign in the country.”

Individual European nations don’t have the capacity to pull off major military missions without the help of the United States. But the U.S. withdrawal is causing Europe to band together in an effort to take the Middle East into its own hands.

Behind closed doors, German Chancellor Angela Merkel criticized the withdrawal ordered by Joe Biden. Politico summarized the feelings in Europe, writing: “Across Europe, officials have reacted with a mix of disbelief and a sense of betrayal. Even those who cheered Biden’s election and believed he could ease the recent tensions in the trans-Atlantic relationship said they regarded the withdrawal from Afghanistan as nothing short of a mistake of historic magnitude.”

“I say this with a heavy heart and with horror over what is happening, but the early withdrawal was a serious and far-reaching miscalculation by the current administration,” Norbert Röttgen, chairman of the German parliament’s foreign relations committee, said. “This does fundamental damage to the political and moral credibility of the West.”

Leader of the Christian Democratic Union and most likely successor of Merkel, Armin Laschet, called Afghanistan “the biggest fiasco” since the founding of the North Atlantic Treaty Organization. Laschet also lamented the European Union’s inability to run the mission without the U.S.: “We see that Europe’s ability to act is not a given without the United States at our side” (Trumpet translation throughout). This means that the U.S.’s decision to withdraw entailed “direct consequences for German and European policy and the German armed forces.”

Germany pulled out its last troops in June. Leaving the war zone has been greatly criticized. On July 28, Deutschlandfunk commented: “NATO Leaves a Country Alone in War.”

Laschet called for “a rapid European and trans-Atlantic response” and advocated that the EU foreign ministers meet for a special council “to analyze the situation.” He also warned of a repeat of the 2015 refugee crisis.

French President Emmanuel Macron warned: “We must anticipate and protect ourselves against significant irregular migratory flows.”

Politico wrote: “At a time when some European leaders, including French President Emmanuel Macron, have been pushing for the bloc to pursue a security policy less dependent on America, Afghanistan is bound to be used as evidence for why ‘strategic autonomy’ is necessary. ‘Naturally this has damaged American credibility, along with that of the intelligence services and of the military,’ said Rüdiger Lentz, the former head of the Aspen Institute in Berlin. ‘One can only hope that the damage to America’s foreign-policy leadership can be quickly contained.’”

The foreign-policy spokesperson of the center-right European People’s Party, Daniel Caspary, and David McAllister wrote in a statement that Europe “must now do everything we can to ensure that those fleeing get protection close to home.” In other words, Europe wants to exert great efforts to prevent them from coming to their shores. To accomplish this, Europe would need to act together, even militarily.

Europe’s push toward a united military, led by Germany, is something we have expected for a long time. In relation to Germany’s military involvement in Afghanistan, late Trumpet contributor Ron Fraser wrote in 2009:

Germany, by virtue of national character, strength of population, industrial might and military heritage, is the only European nation capable of pulling together a multi-nation military machine to project the necessary power to take advantage of Anglo-Saxon decline and rising Russian aggression, in tandem with the rapid rise of other Far Eastern powers. It will be a natural concomitant of this equation that both nato military assets (including nuclear weapons) and non-Anglo-Saxon military personnel will eventually fall under the German-led EU umbrella.

Germany’s military involvement has been viewed shamefully in the past. But when German troops returned from Afghanistan this year, Defense Minister Annegret Kramp-Karrenbauer was accused of not properly honoring the soldiers for their service.

Wolfgang Kubicki, vice president of the Bundestag, accused Foreign Minister Heiko Maas of being responsible for the “biggest foreign-policy disaster since the founding of the Federal Republic of Germany.” Maas has been criticized for allowing local Afghan forces, which have supported the Bundeswehr mission, to fall into the hands of the Taliban.

The message remains for German soldiers: If you serve your country in war, you will indifferently collapse for what you risked your life for.

The message remains for German diplomats: If you have to be saved, the chancellor has forgotten to send the Bundeswehr off in time.

For helpers, friends, supporters of our country who believed in our values, the message remains: Don’t rely on Germany.

The message remains for us in Germany: While the first refugee crisis is far from over, the federal government is doing nothing to avert the next one.

In “Afghanistan Was a Lie of the Merkel Era,” n-tv.de noted on August 17:

There is great horror in Germany at the developments in Afghanistan. The Taliban have embarrassed the eight-year-old grand coalition and Angela Merkel, who is so often celebrated on the international stage, at the end of her era. Obviously, however, there is already a language regime in Berlin designed to save face: First, the unreliable Americans were largely responsible with their hasty withdrawal; second, Germany was never able to take sufficient responsibility for shaping the U.S.-dominated mission; third, the rapid collapse of the Afghan Army took the entire international community by surprise.

It is absurd. The Bundeswehr spent almost 20 years with allies in Afghanistan, 10 years after the War on Terror to bring democracy and human rights (without sufficient debate, by the way, as to what should be achieved in the end)—and now the West is negotiating with the victorious Taliban in Doha, having to beg to get compatriots and aid workers out unharmed. This disgrace will have long, long repercussions.

One man in recent years who has significantly contributed to raising German soldiers’ prestige is former Defense Minister Karl-Theodor zu Guttenberg. Trumpet editor in chief Gerald Flurry wrote the following about Guttenberg’s achievement in this regard:

Guttenberg also helped change the German public’s perception of the military. He led them to begin viewing their army, not with shame, but as part of Germany’s contribution to the world. He was the first politician to call Germany’s military operation in Afghanistan a war. How many remember today that Guttenberg was one of the key figures behind Germany’s military presence in Afghanistan? He was thinking in terms of offensive warfare. And he accomplished all this under the moderate rule of Chancellor Merkel.

Merkel is now on her way out and not running for office again. Crises are brewing all over the world. Europe is looking for a leader who can fill the void. Mr. Fraser further noted in 2009, writing about the Afghanistan crisis: “If ever there was a politician who could take clear advantage of this situation and succeed in the agenda to put the German defense forces at the forefront of European defense, it is Baron Karl-Theodor zu Guttenberg!”

The Bible prophesies of the rise of such a strongman. “And in the latter time of their kingdom, when the transgressors are come to the full, a king of fierce countenance, and understanding dark sentences, shall stand up. And his power shall be mighty, but not by his own power: and he shall destroy wonderfully, and shall prosper, and practise, and shall destroy the mighty and the holy people. And through his policy also he shall cause craft to prosper in his hand; and he shall magnify himself in his heart, and by peace shall destroy many: he shall also stand up against the Prince of princes; but he shall be broken without hand” (Daniel 8:23-25).

Elsewhere Daniel prophesies what this strongman would do: “And at the time of the end shall the king of the south push at him: and the king of the north shall come against him like a whirlwind, with chariots, and with horsemen, and with many ships; and he shall enter into the countries, and shall overflow and pass over” (Daniel 11:40).

In “The Whirlwind Prophecy,” Mr. Flurry explained that the king of the south refers to radical Islam, led by Iran, and the king of the north is a German-led European empire. He also noted: “The Iranians are so focused on conquering their own objectives that they don’t see what the Germans are doing. They don’t recognize how Germany is planning for the bigger war to come! No one but the Trumpet recognizes it! But the facts are visible for anyone to see.”

Terrorists are celebrating their success in the Middle East, but they are not aware of the whirlwind that they are about to experience. As the crisis continues, European leaders will call for stronger military action and a leader willing to take action. Read Mr. Flurry’s article “A Sudden Whirlwind” to learn more about this coming reality.