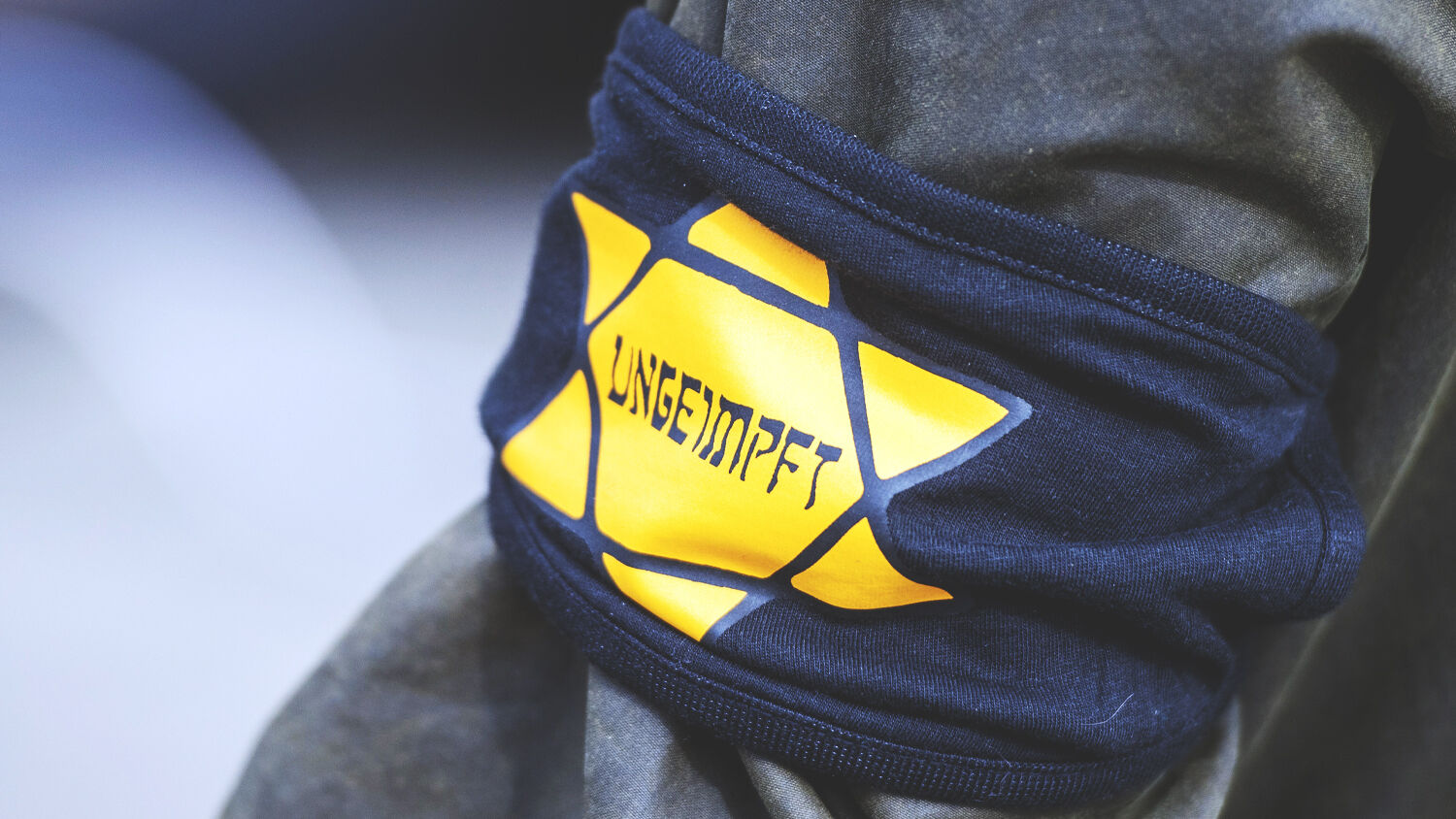 At a demonstration one participant wears an armband with a yellow star, reminiscent of a Jewish star, with the inscription “Unvaccinated”.
Christophe Gateau/picture alliance/Getty Images

Considering how few Jews live in Germany, the increasing offenses are alarming.

The German federal government registered 580 anti-Semitic crimes in the East German states of Brandenburg, Mecklenburg-Western Pomerania, Saxony, Saxony-Anhalt and Thuringia last year. In 2019, 491 anti-Semitic crimes were recorded; 416 in 2018; and 330 in 2017. The drastic increase over the years is an alarming sign for the whole world.

Germany currently has a population of over 83 million people, with around 5 million Muslims. Before the 1930s, the Jewish community had around 560,000 members. Since then, the community has shrunk to only around 95,000 people.

History should teach us that such a trend should not be ignored.

“History’s warning is thunderous and undeniable: Pre-World War ii trends in Britain, America and Europe show that anti-Semitism is a barometer of crisis!” theTrumpet.com managing editor Brad Macdonald noted in 2009 in “Anti-Semitism: Why You Should Be Alarmed.” He also warned of disguised anti-Semitism:

In Europe, the river of anti-Semitism that carved through the Continent, swelling Nazi Germany’s prewar anti-Jew ambitions, has reappeared today, and flows as briskly as ever. Though their hatred is cloaked in anti-Israel and pro-Palestinian rhetoric and gestures, many European leaders are sanctioning, even promoting, the persecution of Jews.

Today, we are witnessing a steady increase in anti-Semitism and hatred for the Jewish nation in the Middle East. European history is full of examples of such hatred escalating into brutal violence. The years leading up to World War ii are only one of many harbingers that such hatred always escalates.

But the Bible gives an even stronger warning. “Great tribulation,” “a time of trouble, such as never was since there was a nation even to that same time,” is about to come to this Earth (Matthew 24:21; Daniel 12:1). This time will be ushered in by hatred toward modern-day Israel, which includes the Jewish nation.

“For, lo, thine enemies make a tumult: and they that hate thee have lifted up the head. They have taken crafty counsel against thy people, and consulted against thy hidden ones. They have said, Come, and let us cut them off from being a nation; that the name of Israel may be no more in remembrance” (Psalm 83:2-4). In “A Mysterious Prophecy,” Mr. Flurry explained that the nation that would be plotting this final attempt to blot out the name of Israel is the very same nation that tried to do so more than 75 years ago.

The good news is that the Bible repeatedly describes the time period that we are now entering is not only the worst in history but also the one that leads right up to Jesus Christ’s return. At His return, Christ will enforce God’s law that mankind rejected ever since the Garden of Eden and a time of unparalleled prosperity will result.

There is reason why anti-Semitism is one of the strongest and most enduring forms of hatred. The reason behind this also reveals the hope that lies beyond today’s events. Both of these truths are explained in “The One Minority Society Loves to Hate,” by Richard Palmer, assistant managing editor of theTrumpet.com. Request a free copy of Germany and the Holy Roman Empire to learn what both history and prophecy teach about our future.