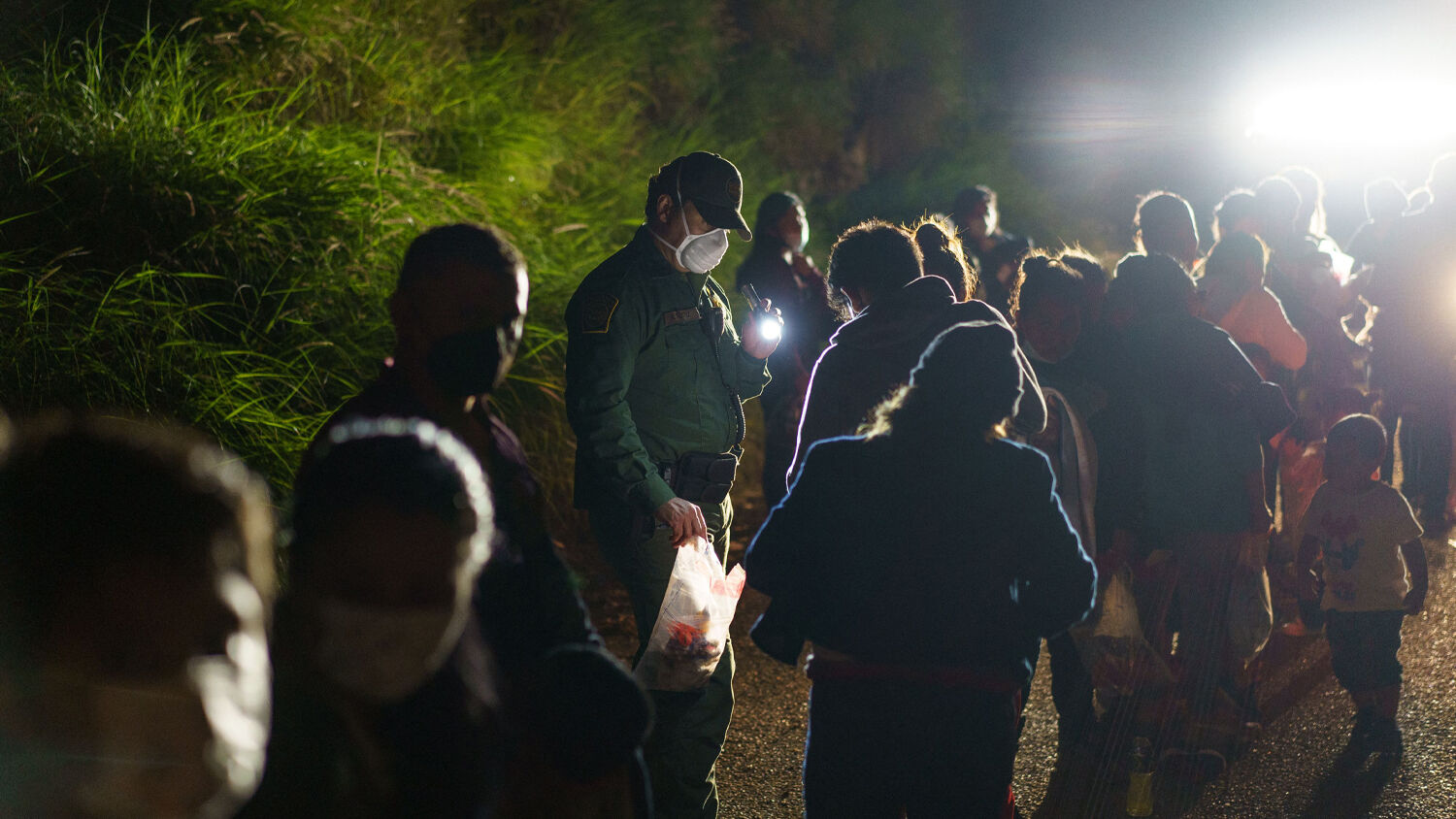 Migrant families are processed by United States Border Patrol after crossing the Rio Grande into the United States in Roma, Texas, on July 8.
PAUL RATJE/AFP/Getty Images

More than 1.1 million illegal immigrants have been processed by Border Patrol from January to July this year, a sign of America’s ever worsening border crisis. This isn’t even counting the estimated 300,000 who have evaded capture. At this rate, by the end of the year, those entering the country illegally will match the population of Houston, the United States’ fourth-largest city, with 2.3 million people.

Around 210,000 people entered the country in July alone, the highest single-month figure for illegal entrants into the U.S. in over 20 years. And the immigrants have come from more than 150 countries.

Most of the entries has been via the Rio Grande Valley. Over 78,000 entrants were captured; tens of thousands more evaded capture. This region is the epicenter of the surge in illegal crossings.

The Biden administration has largely remained silent on the border catastrophe. Illegal immigrants have been flooding in for months. Hundreds of thousands have been granted entry and flown to different parts of the country. They have practically been welcomed with open arms.

Some of these immigrants are looking for refuge, fleeing turmoil and poverty. But how many of the tens of thousands are gang members, drug dealers and rapists, bringing their anti-American hostility into the United States? None of them have been required to prove they embrace the Judeo-Christian values on which America was founded. None of them have even been tested for coronavirus. None of them are required to take the double jab like American citizens are being increasingly pressured to.

And far too many of them have a fundamental disregard for law.

By allowing people to lawlessly enter the country, the government is encouraging this spirit of lawlessness. This lawless, open-door immigration policy that typified the Obama administration embodies the Biden administration today.

Liberal “progressives” envision a world without borders. They want open borders. They don’t want to send anyone home—certainly not children. They want amnesty for all illegal aliens. They want the federal government to handle the situation indeed, not by locking the door, but by taking it off its hinges! This is what they have vowed to do from the very beginning—to fundamentally transform the United States of America.

And so, the all-out assault on America’s southern border will continue. And it will contribute to not only the transformation of the nation and the erasing of its border security, but to its actual destruction! …

The flood of illegal immigrants highlights a fundamental disregard for law. It exposes and exacerbates the loss of a common culture. America’s inability to protect its borders shows that the very things that define the United States as a nation are being chipped away.

Policies encouraging illegal immigration fit right in with the Democratic Party’s radical agenda to “fundamentally transform” America. It is a surefire means of undermining America’s traditional identity and culture.

The “American dream” was founded largely on the ideal of legal immigrants coming together and embracing a common law and language. It was an ideal built partly on the blessings God bestowed on the nation. Now, it is turning increasingly into a nation of lawlessness and a hodgepodge of ideas from over 150 different countries.

These lawless immigration policies are bringing curses on America that were prophesied in your Bible.

In his book The United States and Britain in Prophecy (free upon request), Herbert W. Armstrong proved that biblical prophecies about “Israel” principally refer to modern-day America and Britain. Upon Israel’s agreement to a special relationship with God, God promised to bless Israel for obedience and to curse it for refusing to obey to Him.

Trumpet editor in chief Gerald Flurry commented on this verse in his article “Where America’s Race Riots Are Leading,” writing:

[N]otice the first part of verse 52: America’s “high and fenced walls [are to] come down.” Aren’t we seeing that take place right now? This is talking about a virtually open border where foreigners flood into the land. Illegal immigrants are streaming over the Mexican border in droves—and that is clearly the way some of our leaders want it.

Do you realize that the immigration problem befalling America right now is actually prophesied here in Deuteronomy? …

But why does God allow this to happen? Notice the last part of verse 52: God gave Israel their land! Did you know God gave America and Britain the land they have? The U.S. has been the beneficiary of the richest land on Earth, and Britain received a bountiful island, necessary for the rise of its empire. And yet, because we have chosen not to acknowledge Him as providing it, He is allowing our lands to be overrun by foreigners.

God gave us these gates, these cities, this wealth and this power! And now He is taking it back because of our ingratitude and rebellion!

The border crisis is born of lawlessness but also brings about more lawlessness. It is a means to blot out the name of Israel. United States President Donald Trump sought to rectify the immigration problem. But with the radicals stealing the November 2020 election, the Joebama administration is working to continue its crusade to destroy this nation. But God is not going to allow them to do so.

To learn the biblical explanation of how God will intervene, read Mr. Flurry’s article “Why I Still Believe Donald Trump Is Coming Back.” It explains exactly how God will use Donald Trump to stop these anti-American policies from destroying the nation—temporarily.