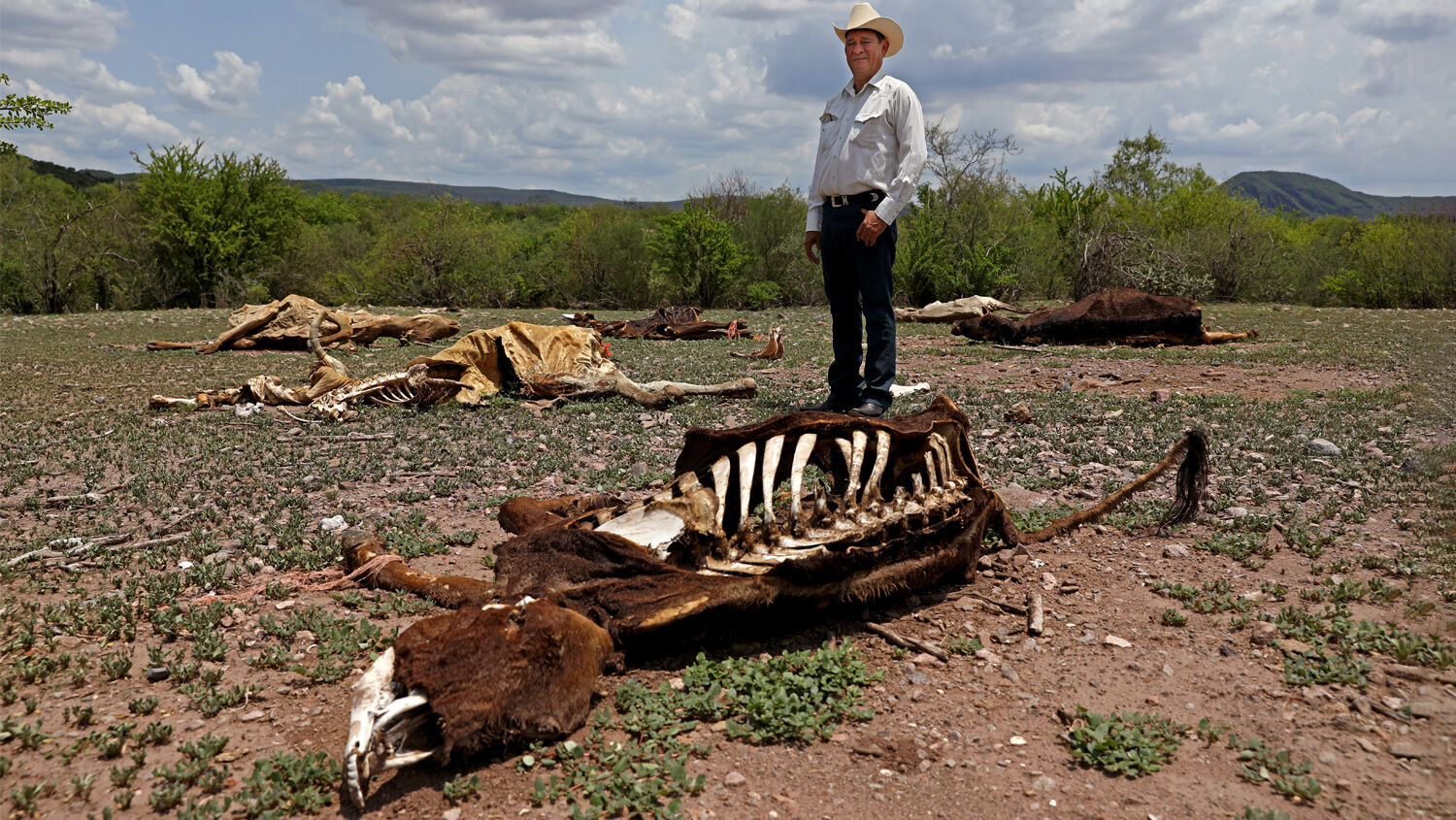 Inflation isn’t the only thing causing the price of food to increase.

Sonora is famous for its beef. The state is even called the cattle capital of Mexico. Many Sonorans eat beef for breakfast, lunch and dinner. Yet they still have enough left over to ship 255,000 tons to the United States. These facts make it all the more devastating that drought is starving tens of thousands of cows to death and bringing hard times to ranchers across the southwest of North America.

“Two years of extreme drought have turned large stretches of northern Mexico into a boneyard,” reports Los Angeles Times foreign correspondent Kate Linthicum. “Between starvation and ranchers forced to prematurely sell or slaughter their livestock, officials say the number of cattle in Sonora has dropped from 1.1 million to about 635,000. It’s an unimaginable loss for a state that is world-famous for its high-quality cows, and where beef is not just a central part of the diet and economy but also a tradition that binds families together. This is a place, after all, with a bull on its state flag ….”

Linthicum interviewed one rancher who had 70 of his 100 cows starve. “There’s nothing for them to eat,” said Marco Antonio Gutierrez. “There used to be big ranches here. Now it’s pure sorrow.”

For months, ranchers depended on alfalfa grown in irrigated fields to replace the withered grass on the rangelands. But once the water at the local reservoir fell below a certain point, authorities had to cut off the alfalfa fields from their irrigation systems to conserve water for drinking, cooking and bathing. The price of alfalfa has doubled, and many ranchers can no longer afford it. Many are considering whether it is time to auction off their remaining cattle and find some new line of work.

“Imagine the sadness—all the sacrifices of your grandparents and your parents for nothing,” said Julio Aldama Solis, a rancher from Cajeme. “We’re all praying to the Virgin of Guadalupe that it rains.”

There have been a couple of big thunderstorms in other parts of Sonora, enough to cause a flood in Nogales. Yet 97 percent of the state remains in its worst drought in 500 years. On the other side of the U.S.-Mexico border, this mega drought is hitting Arizona, California, Nevada and Utah hard. Ranchers across the Southwest are auctioning off cattle they can no longer afford to feed. IndexBox projects that U.S. beef production will fall by 2 percent this year, while beef prices increase by nearly 5 percent.

“Your food bill is going up, but your meat bill might increase a little bit faster than other food products,” says Katelyn McCullock, an economist at the Livestock Marketing Information Center. Yet as inconvenient as these price increases are, they are just a tiny preview of food shortages to come.

A study published in the journal Science found the 19 years from 2000 to 2018 was the driest in the history of the Southwestern U.S. since the late-1500s and the second-driest since a.d. 800. This study was based on tree-ring reconstructions of summer soil moisture. It confirms studies showing that over the past few hundred years, the U.S. has received some of the best weather North America has to offer.

Previous megadroughts contributed to the falls of the Mayan civilization, the Cahokian civilization and the Aztec civilization. These droughts were not caused by greenhouse-gas emissions, as they did not drive cars or burn coal to generate electricity. But it may have been caused by immoral human activity, as the Mayans, Cahokians and Aztecs were involved in many pagan rituals, such as human sacrifice.

Herbert W. Armstrong proved in The United States and Britain in Prophecy that the U.S. and Britain are descended mainly from the ancient Israelite tribes of Manasseh and Ephraim. And prophecies in Deuteronomy 28, Isaiah 23 and Ezekiel 5 describe the devastating effects that economic besiegement will have on America and Britain in the end time. Widespread crop failures will worsen these effects.

This passage is about corn, wheat and barley grown in the Midwest perishing; grapes, figs and pomegranates grown on the West Coast drying up; and apples grown in Michigan withering.

Joel continues: “How do the beasts groan! the herds of cattle are perplexed, because they have no pasture; yea, the flocks of sheep are made desolate. O Lord, to thee will I cry: for the fire hath devoured the pastures of the wilderness, and the flame hath burned all the trees of the field” (verses 18-19).

Animals will starve like they are starving now in Mexico. Drought and wildfires will dry up their pastures and burn away their forage. God sends such disasters to destroy America’s food, even as foreign nations refuse to sell produce to the United States. America’s agrarian crisis is setting the stage for these sobering prophecies to be fulfilled, but God is not sending such curses because people use too much on fossil fuels. He is sending them because they have turned away from His moral laws.

For more information on how experts have misdiagnosed the cause of devastating weather disasters, please read “The Deadly Climate Change Deception,” by Trumpet editor in chief Gerald Flurry.