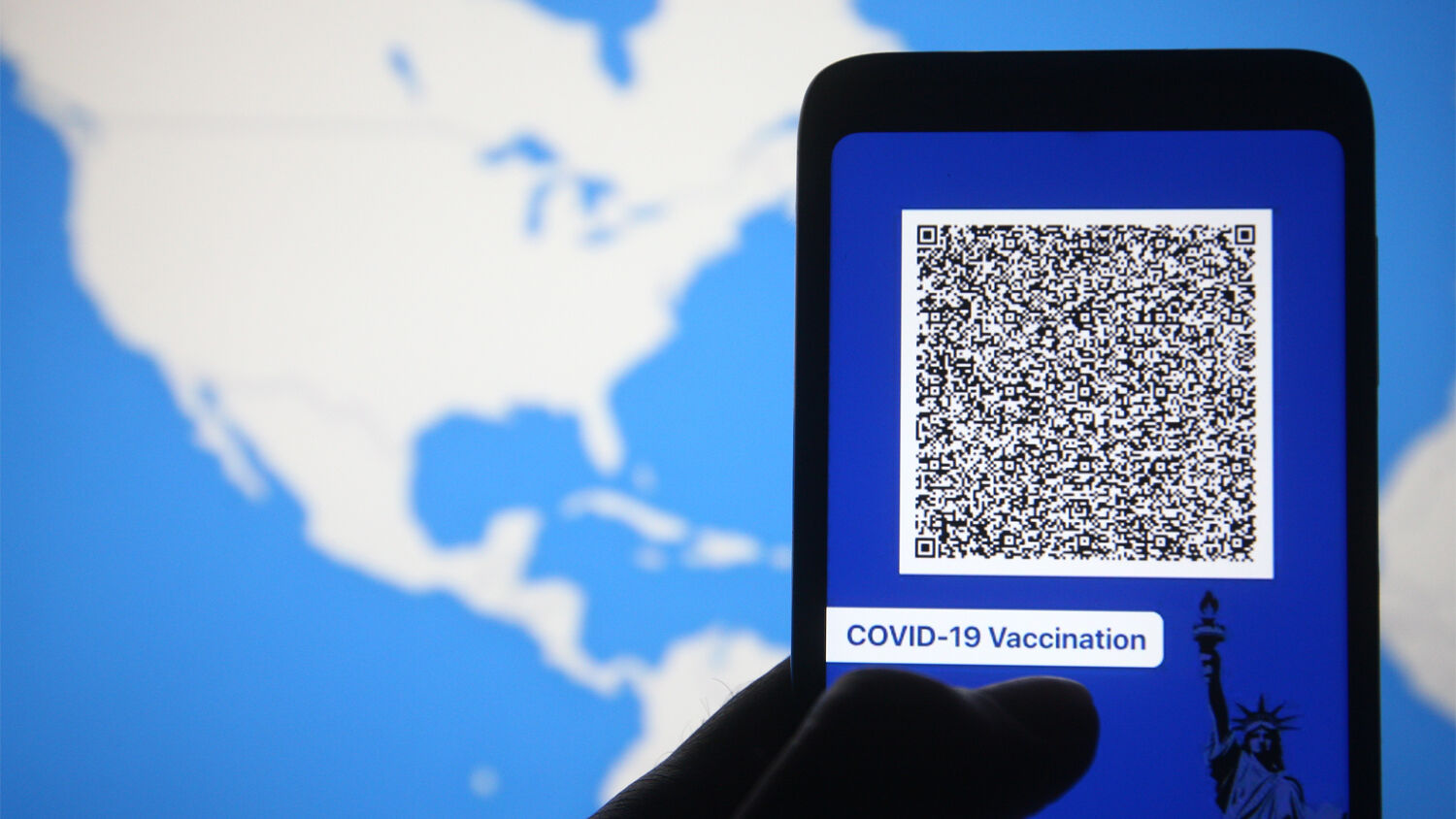 The ‘Land of the Free’ goes from jab persuasion to flat-out coercion.

New York City will require vaccine passports for admission into gyms, restaurants and other indoor activities, Mayor Bill de Blasio announced on August 3. This new policy is going to be phased in over the next few weeks. And come September 13, inspection and enforcement will begin.

“The move is an effort to increase the number of people vaccinated,” he said. “That is the key to protecting people and the key to recovery.” The evidence, however, shows that the jab not only fails to protect people from infection but is actually dangerous. Thousands of Americans have already died because of the vaccine.

Despite the evidence, local and federal governments are pushing ahead with “vaccine passports.” The New York vaccine passport will be via physical documentation or the Excelsior app. The latter, which is likely to be overwhelmingly more common, will give the government knowledge of everywhere you go and what you do, at all times.

But this isn’t happening simply through state legislation. The Constitution doesn’t allow for something like that. The actual mechanism is more insidious.

On Tuesday, Joe Biden actually said he didn’t think states needed to require vaccine passports: “I don’t think they need to do that. I think they just need to give the authority to those restaurants or businesses to say, in order to come in, you have to give proof that you’ve been vaccinated or that you can’t come in.”

This comes after Biden himself mandated that all federal employees undergo regular testing, wear masks and remain socially distanced if they choose to remain unvaccinated. It’s jab—or else.

The federal government is the largest employer in the country. This rule is, therefore, effectively coercing 2.1 million Americans to get the jab.

Initially, the government tried persuading Americans through incentives and bonuses to take the vaccine. Get the jab and get $100 or a free burger. But with half of America still unvaccinated, the Biden administration is resorting to coercion.

Businesses and employers are being encouraged to deny Americans their everyday rights and privileges. And Americans are responding.

The day after Biden announced the new vaccine mandate, the Walt Disney Co. said all of its employees would need to be vaccinated within two months. Walmart, the largest private employer in America, similarly said it would require vaccinations for all employees at its Arkansas headquarters.

The “experts” want this same approach extended to everyone. According to New York University Prof. Arthur Caplan and Yale Prof. Sarah Hull, by remaining unvaccinated, Americans forfeit the freedom to “dine at restaurants, attend shows in a theater, and travel for leisure.” cnn’s Don Lemon says, “It has nothing to do with liberty. You don’t have the freedom and the liberty to put other people in jeopardy.”

This new policy is designed to give the government the power to determine the extent of a citizen’s rights. It is being crafted to leave people no choice but to take the vaccine. But crucially, it is being done in such a way that people “voluntarily” give up their freedoms.

No legislation has been passed explicitly forcing people to take the vaccine. The government is simply collaborating with private businesses to force people to choose between taking the vaccine and remaining unvaccinated. Take the vaccine, and you can go to work, the movies, restaurants, the gym and anywhere else. Refuse, and your options are far more limited.

This is based on the premise that the government knows best. The politicians and the experts know best. The average American can’t be trusted. According to Caplan and Hull, “[T]he time for begging and pleading to vaccinate must come to an end. The dangers we collectively face are too great to indulge bad choices any longer.”

Is remaining unvaccinated a “bad choice”?

Thousands of Americans are dead or dying because of the double jab. A large percentage of those vaccinated are still catching covid-19. Meanwhile, natural immunity is a proved, scientific fact that the radical left is conveniently staying silent on.

What is all of this really about? Why is the government trying to force you to take a vaccine it knows doesn’t really work?

This is about government control. This is about the radical left wanting control over what citizens can and can’t do. This is about undermining the Constitution and attacking everything that the United States stands for.

covid-19 and the vaccine mandates are simply a vehicle for the left’s chief goal: destroying America’s constitutional form of government.

In his 2016 article “America Has Been ‘Fundamentally Transformed,’” Trumpet editor in chief Gerald Flurry explained:

What is happening in the Democratic Party is an extension of and intensification of a process started by the previous president.

When Barack Obama promised to “fundamentally change America” during his 2008 presidential run, few people knew what he really meant. Now that he is out of office, it is becoming clearer all the time that the change he was talking about was something far more dangerous than many people assumed.

He meant changing America from a constitutional republic. And what we are witnessing in the country today shows that, to an alarming degree, he succeeded!

The Obama administration was infamous for spying on American citizens. Journalist Andrew McCarthy said, “No administration in American history was more practiced in the dark arts of politicizing intelligence than President Obama’s.”

Vaccine passport apps like Excelsior will give the government unprecedented knowledge about the movements of American citizens. And such knowledge means power and control to transform the Land of the Free into a Communist state. And this is all being accomplished through deception and lies.

We are getting a hard look at just what the radical left is willing to do in order to seize power and stay in power. They have no respect for the rule of law! They believe they are above the law. It is no exaggeration to say that such contempt for the nation’s founding principles is a threat to the republic!

Leftist radicals hate the Constitution. Barack Obama has stated explicitly that it is an outdated document and criticized it for being “a charter of negative liberties.” Liberals in academia, the media and in government don’t believe governing officials should be restricted by the limitations imposed by the Constitution. America’s founders imposed those restrictions to prevent tyranny!

Our Constitution makes America different from any nation in the world. The protections afforded by the Constitution have allowed God to bless this nation tremendously. They prevent a dictator from seizing control of the nation’s unmatched resources—resources that God gave in order to fulfill promises He made to the patriarch Abraham. I urge you to request our free book The United States and Britain in Prophecy for the marvelous proof behind that statement. America is a modern descendant of the biblical nation of Israel.

You need to understand the real reasons why America has been the greatest nation in history. No man can “make America great again”—certainly not if he is ignorant of the fact that it was God who made it great, and ignorant about why He did so!

The Bible makes it clear that Satan the devil is a powerful spirit being that exerts an evil influence over the world today (2 Corinthians 4:4; Ephesians 2:2). He does this through a mastery of lies and deception (Revelation 12:9).

“This evil spiritual power is influencing the radical left!” Mr. Flurry wrote. “Most Republicans don’t realize what they are dealing with: people who are absolutely committed to destroying the government of this land!”

This was all prophesied in your Bible. Studying the Bible as you watch world events will help you make sense of what you are seeing in the world. It will also help you understand where it is all leading.

A good place to start is with Mr. Flurry’s article “America Has Been ‘Fundamentally Transformed.’” It will clearly explain how these events are in accordance with God’s plan, and what you can do about it.