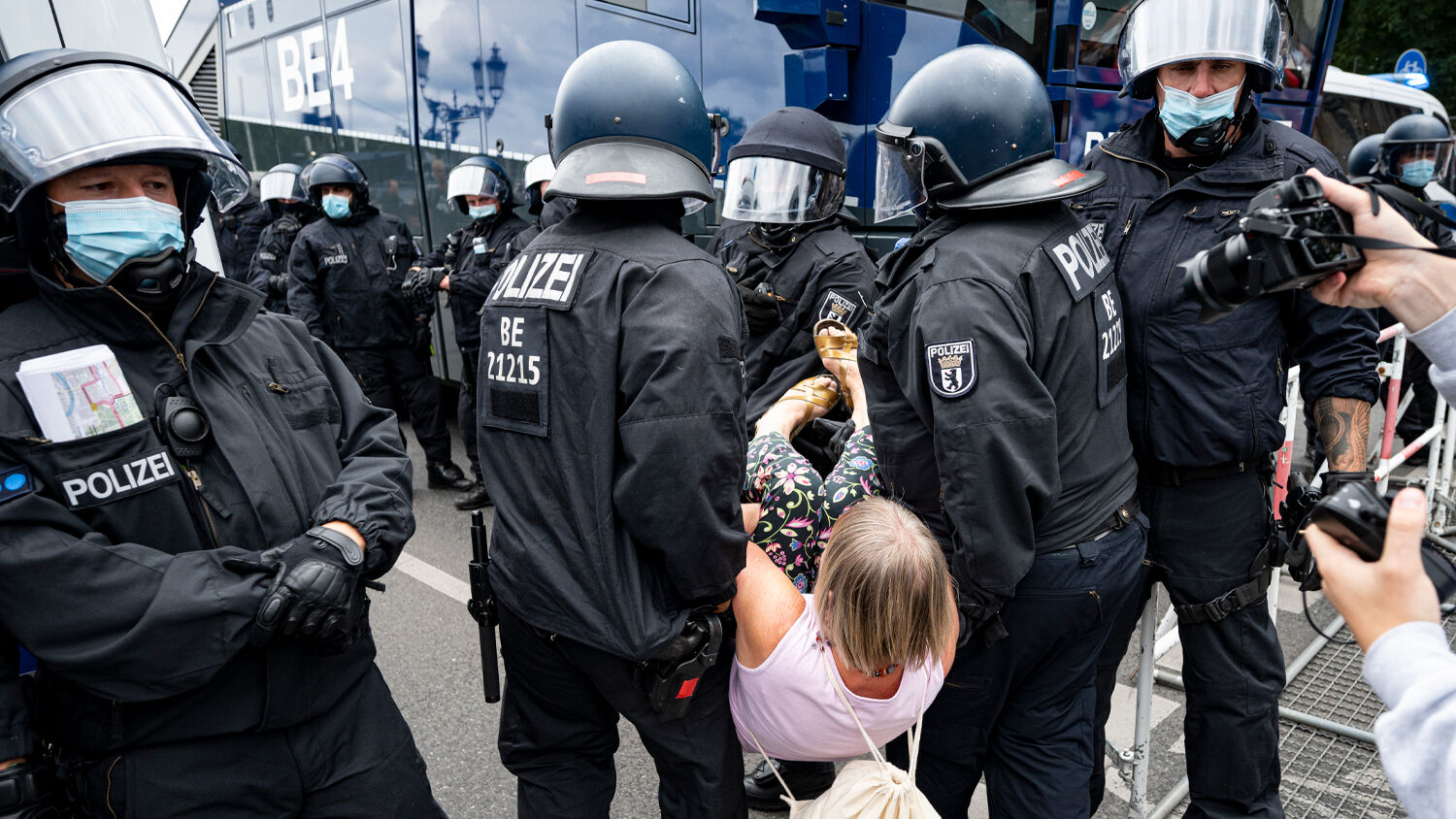 Police haul off a demonstrator during a demonstration at on August 1 in Berlin, Germany.
Fabian Sommer/picture alliance/Getty Images

Democracy—only for those who agree with the state

Anti-vaccination protests erupted in Europe over the weekend. Around 200,000 marched throughout France. Thousands more marched in Berlin, Germany, even though the government had banned all demonstrations by the Querdenker movement, a diverse group of people who disagree with the government’s coronavirus measures. Police violently confronted those who ignored the bans. Around 600 demonstrators were arrested on August 1. One demonstrator, a 49-year-old man, died of a heart attack after being arrested.

“After participants did not heed orders to abide by hygiene rules, police used pepper spray and truncheons to break up the crowds,” the Guardian reported. Yet an lgbtq march, with over 35,000 participants, at Berlin’s annual Christopher Street Day celebration on July 24 was allowed to take place unhindered.

Regarding the march, Time wrote: “Organizers made repeated calls for revelers to put masks on and keep their distance—though it wasn’t always possible due to the sheer number of people.” Social-distancing rules and mask requirements may have been broken, but the police never dissolved the large crowd.

On August 2, Julian Reichelt wrote for Bild that it’s becoming increasingly evident that those who submit to government political correctness are portrayed as those who are in the right. “Courts approved the bans on the ‘Querdenker’ demonstration,” wrote Reichelt. “You can call that the rule of law, but I say: Too much in Berlin is now political.”

The German government prohibits some demonstrations, citing national health concerns, but willingly allows other large gatherings that fit within its agenda.

“When the constitutional state begins to believe that it can patronize fundamental rights, granting or withdrawing them as it suits the government’s policies, it opens the gates to all those who want to abolish it,” Reichelt wrote. “Can the obligation to wear a mask in the open air, which virtually no one adheres to anymore, really outweigh the fundamental right of freedom of assembly? The state should not be allowed to ban because it disagrees. And never should this state so lightly claim that the opinion of others brings death. This fearsome assertion is increasingly becoming a mental pandemic in our country.”

This is the current state of German democracy. Sadly, millions of Germans and the vast majority of the media ignore this concerning trend toward authoritarianism in Germany. As freedom of speech and assembly are being stripped away, it is becoming increasingly clear that European governments are deciding for themselves what a future “democratic” order should look like.

In April, the German government put the Querdenker movement under nationwide surveillance, claiming the movement was causing an “anti-democratic and/or security-endangering delegitimization of the state.” Of course there are right-wing extremist groups that actually want to overthrow the government, and some of them mix with the Querdenker movement from time to time. But if an individual is against taking a vaccine and wants to express his opinion on the street, is he truly threatening democracy?

To even raise this question today puts you at odds with the government and may cause you to be surveilled as a criminal.

“One of the most important effects of the global panic over covid-19 has been almost overlooked,” Trumpet editor in chief Gerald Flurry wrote last year. “Europe’s response to the pandemic is accelerating the fulfillment of one of the most crucial end-time prophecies of your Bible! The coronavirus is hastening the arrival of the prophesied Holy Roman Empire. … Europe’s response to covid-19 has set the stage for dictators to rise.”

When Mr. Flurry wrote those words, many had hoped that the pandemic and the strict governmental response would be short-lived. But as time goes on, we are seeing how Europe has been transformed. We are seeing the authoritarianism that people hoped had died with Adolf Hitler reemerge! You ought to consider where such early beginnings of authoritarianism will lead if they remain unchecked.

The Querdenker movement hopes it can inspire enough people to join its fight against the government. Some of them use violence; some are allying themselves with other extremist movements. But the Bible reveals that none of this will stop Germany’s drift toward establishing the rule of the Holy Roman Empire.

Revelation 17 compares this empire to a beast. It reveals that though this old authoritarian rule was thought to be dead, it will plague mankind once more. “The beast that thou sawest was, and is not; and shall ascend out of the bottomless pit, and go into perdition: and they that dwell on the earth shall wonder, whose names were not written in the book of life from the foundation of the world, when they behold the beast that was, and is not, and yet is” (verse 8).

To understand what this means and why you should be concerned, I urge you to read Mr. Flurry’s article “Coronavirus and the Holy Roman Empire.” This article will prove to be of utmost importance to understand the current crisis.