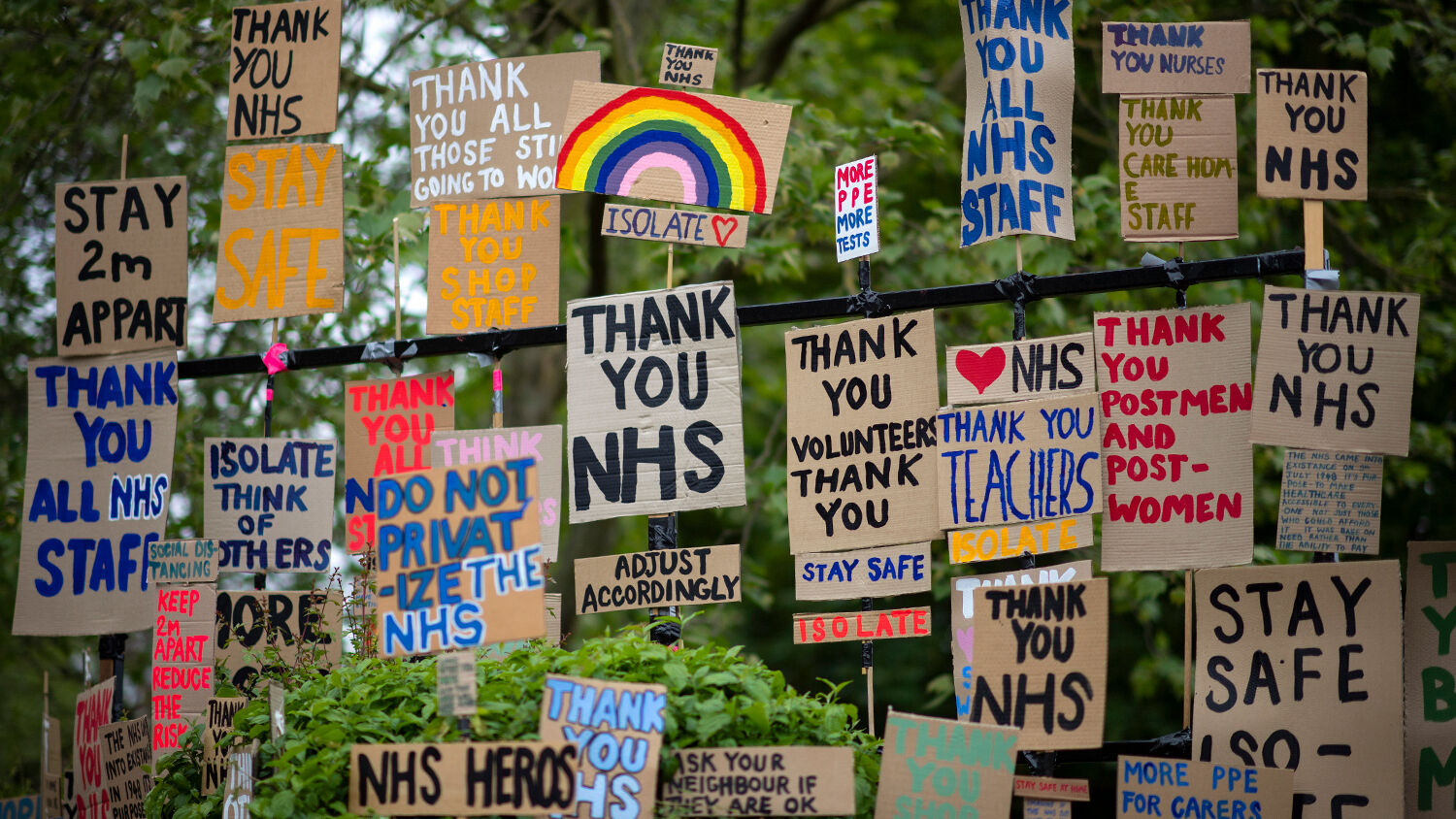 Signs in support of the NHS are seen in East London on April 25, 2020 in London, England.
Justin Setterfield/Getty Images

Britain’s National Health Service is apparently the best thing ever. Labour leader Sir Keir Starmer called it “our country’s greatest institution.” Former Health Secretary Matt Hancock went one better, saying, “The nhs is the best gift a nation has ever given itself.”

On July 5, the nation celebrated the “birthday” of the nhs. A thanksgiving ceremony was held at St. Paul’s Cathedral. Buckingham Palace hosted a garden party. Most remarkable was the awarding of the George Cross, Britain’s highest civilian award for “acts of the greatest heroism or of the most conspicuous courage in circumstances of extreme danger,” to the nhs.

In the venerated name of the nhs and its covid-19 directives, the British have surrendered freedoms that their ancestors fought and died for for hundreds of years.

Yet the nhs is measurably worse than health services in other developed countries. Dr. Kristian Niemietz, head of policy at the Institute of Economic Affairs, compared nhs performance in four common cancers and found that Germany’s health system yields 12,000 fewer deaths every year. James Bartholomew crunches even more numbers in his 2013 book, The Welfare State We’re In, and concludes that if the nhs functioned as well as an “averagely good health-care system,” it would yield about 48,000 fewer deaths each year.

Britain has been shut down for the last year “due to covid.” In fact, the infectious virus we really ought to be concerned about is the nhs. It has been weakening Britain from within for decades.

The National Health Service began after World War ii, when the British voted out Winston Churchill and elected the Labour Party. Labour celebrated by singing “The Red Flag,” the Communist anthem, in Parliament. Aneurin Bevan was one of the most extreme of these socialists, having been briefly kicked out of the Labour Party six years earlier due to vocal support for communism. Then he became minister of health and helped establish the nhs. His biographer, Labour Party leader Michael Foot, said his thinking was “rooted in Marxism.”

The nhs was part of a reformation of the welfare state that deeply rooted socialist thinking into the British psyche. These reforms minimized personal freedom and responsibility, replacing them with a collectivist approach. Any man’s personal failings became society’s problems. If he failed to care for his health, ran out of cash, or fathered children out of wedlock, the nation would bear the expense.

Of course, any just society needs a safety net. No one wants to see a child die because his or her parents can’t afford to pay the bills. But the new welfare state went much further. And the result was not just an economic decline but a decline in character.

Bartholomew writes, “It is not going too far to say that there seems to have been a revolution in the culture and character of the British people in the last 60 years. The evidence is overwhelming that they are less polite and more violent. … A picture emerges of a country that has become brutish and even degenerate compared to how it was.”

The whole world has suffered in this collapse. Defense spending suffered cut after cut to pay for the nhs. For many, January 1968 marks the official end of the British Empire. Prime Minister Harold Wilson announced that Britain would withdraw all its forces east of the Suez Canal. United States Secretary of State Dean Rusk was incredulous and “could not believe that free aspirin and false teeth were more important than Britain’s role in the world.” But Britain had no interest in empire or even in a responsible drawdown of the empire. It just dropped everything, heedless of the lives it shattered.

In India, the result of Britain’s hurried handover to native elites was a disaster. As British authorities pulled out of India, the ethnic tensions they had kept under control exploded. Estimates vary wildly, but somewhere in the region of 1 million people died in the violence. As Britain pulled out of Uganda, Zimbabwe, Egypt and elsewhere, men like Idi Amin, Robert Mugabe and Gamal Abdel Nasser took over.

The nhs has been part of an agenda that has diminished personal responsibility, destroyed families, and extinguished Britain’s sense of duty toward the world. America is rapidly hurrying down the same path, expanding the welfare state and government power, and smothering individual liberty and responsibility. It too is rejecting any ambition to help or even set an example for the wider world.

This is perhaps the most pernicious effect of the welfare state. It took Britain’s focus off a wider vision and turned it inward. No longer would we dare great things. And when a disease came along which 99.97 percent of healthy people survive, we cowered in fear and prayed to the nhs for salvation.

The desire to place faith in a big government to take care of us is alluring but deadly. We were created to thrive in personal responsibility, striving to look after ourselves and each other, rather than sitting back and waiting for a bureaucracy to do it for us.

A society that encourages individuals to strive is one that allows them to thrive—and enables them to then give to others. No society has ever been perfect, but some have been far better than others. Those are the nations, like Britain, that have acknowledged that men are created to exercise freedom, bear responsibility, help others and build society.

God allowed the decline of Britain and now America to pave the way for a new society—one that takes care of its poorest and ensures the sick don’t die for lack of funds, but not by stripping individual and family responsibility. You can read more about it in our free booklet The Wonderful World Tomorrow—What It Will Be Like, by Herbert W. Armstrong.