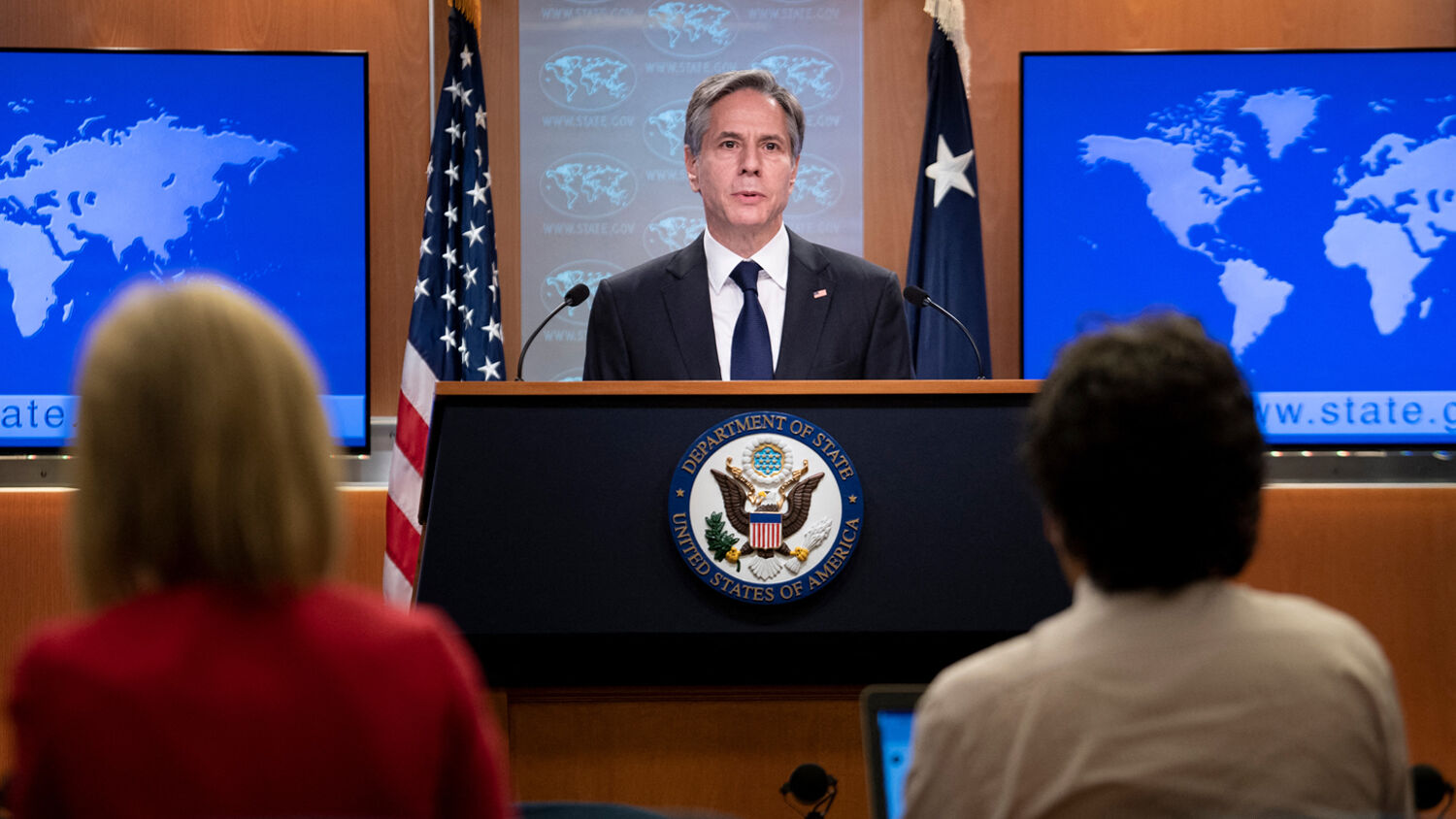 U.S. Secretary of State Antony Blinken speaks about refugee programs for Afghans who aided the U.S. during a briefing at the State Department on August 2 in Washington, D.C.
BRENDAN SMIALOWSKI/POOL/AFP/Getty Images

The ‘apology tours’ are back.

United States Secretary of State Antony Blinken issued a cable on July 23 to all U.S. embassies around the world directing ambassadors to promote a negative view of American history and society. They should, he said, make promoting democratic and human rights a priority, but while doing so acknowledge how imperfect America is with human rights.

Politico obtained the lengthy document and reported that Blinken believes openly discussing how awful America has been with human rights will strengthen their platform to effect change. Politico wrote:

In promoting human rights and democracy abroad, U.S. diplomats should make “clear that we ask no more of other countries than we ask of ourselves,” Blinken states. “That means we acknowledge our imperfections. We don’t sweep them under the rug. We confront them openly and transparently.”

It might be “painful, even ugly,” but Blinken argues that such honesty “helps disarm critics and skeptics who would use our imperfect record at home to undercut our global leadership on these issues.”

What effect will “open” and “honest” policy have on the moral authority America has in the world? Politico wrote:

Blinken notes that democracy as a concept faces challenges worldwide from populist and authoritarian forces. The United States hasn’t escaped that trend, thanks to “political polarization, disinformation and misinformation, and low levels of trust in government.” Neither has it been immune to human rights failures, with too many Americans still facing discrimination on multiple fronts.

Blinken actually is correct: America is facing a lot of misinformation, disinformation, threats from authoritarianism, and discrimination. But these abuses are coming from the Biden administration. Blinken is making sure the entire world knows how terrible of a nation America is and has been. He is essentially exporting the self-loathing principles of critical race theory as a foreign-policy dialogue.

Ever since being confirmed as secretary of state, Blinken has clearly trumpeted the return of Barack Obama’s foreign policy.

In a June 1 New York Times interview, President Obama said, “I think that what we’re seeing now, is Joe and the administration are essentially finishing the job.” The Biden administration is the third term of Obama’s administration, continuing and actually intensifying the same policies.

Blinken was the deputy national security adviser and the deputy secretary of state under John Kerry in the Obama years; he also worked with the Clinton administration and directly for Joe Biden in the Senate. Blinken was involved in some of the worst foreign-policy decisions in American history, which include the Iran nuclear deal, the Cuba deal and America’s response to the Arab Spring. That legacy continues under his tenure.

In the first high-profile meetings between the United States and China in March, Blinken was confronted by Chinese officials accusing the U.S. of human rights abuses that were worse than China’s. Stacey Lennox at PJ Media wrote:

Blinken let the government that holds Uyghur Muslims in concentration camps (where they harvest organs, forcibly sterilize women, and force people to work in slave labor situations) make a fool of him ….

The ccp [Chinese Communist Party] is raiding news organizations in Hong Kong and has disappeared dissidents from the city. The Wuhan lab has never been forthcoming about the origins of covid-19, which has ruined lives and sent vast numbers of people into abject poverty around the world. Yet when Blinken timidly mentioned the Communist regime’s human rights record, the delegation was having none of it. Somehow, the ccp suggested the United States is far worse because Democrat mayors let people riot all summer. It was unbelievable.

Instead of creating a policy that refutes these ridiculous accusations by the Communist Chinese government, Blinken has created a policy for diplomats that agrees with these accusations. This was possibly the worst possible posturing for Blinken to take against one of America’s biggest international rivals.

Earlier this month, Blinken announced on Twitter that he is inviting the United Nations’ special rapporteur on contemporary forms of racism to the U.S. He did not specify what the goal of the visit would be, but the special rapporteur usually investigates racism in whatever country he or she visits. This is not historical racism, it is contemporary—racism occurring right now. PJ Media wrote:

The special rapporteur is Ms. E. Tendayi Achiume of Zambia. She’s part of the UN High Commission on Human Rights, a farcical committee whose current membership includes China, Cuba and Venezuela. China is currently running slave labor in concentration camps in Xinjiang and threatening its neighbors. Venezuela is a human rights and economic basket case thanks to its socialist government. Cuba is a dictatorship that arrested independent journalist Dina Stars live on the air while she was speaking with a journalist in Spain.

To add to the irony, Blinken made the announcement while Cuba was in the midst of protests against the dictatorship, waving American flags and calling for reform. But don’t worry: The same government that cracked down on the Cuban protesters will be involved in investigating racism in America.

Such weak policies have a terrible track record. Lennox wrote that the Obama “apology tours” will have some blowback from Republicans and critics of the Biden administration:

Maybe Republicans attacked Obama because those apology tours lit the Middle East on fire and ended with our sailors kneeling for the Iranians? There’s not a chance the mullahs would have pulled that during the Trump administration. Now, China may be bold enough to give it a try. Heck, the Iranians reportedly decided to grab a journalist here in the U.S. How did the Biden administration respond? By telling members of Congress that we would release the funds related to the oil embargo to the globe’s number one sponsor of terror.

These Biden administration officials are “finishing the job” of the Obama presidency. Its foreign policy lacks logic and undermines the security of the United States. This is the real Obama doctrine.

What is behind these foreign-policy decisions?

America Is Still Under Attack

In America Under Attack, Trumpet editor in chief Gerald Flurry exposed the real source of the disastrous decisions being made by American leaders. Revelation 12:12 reveals that Satan the devil was cast down to the Earth in this end time and is exerting more influence on world events than ever before. America Under Attack details how Satan is now focusing his attack on America, the British peoples and the nation of Israel in the Middle East.

This influence and attack reached a peak under the Obama administration. The irrational foreign policy led to a complete collapse of American power and influence abroad. Mr. Flurry wrote:

How much is the devil influencing America’s foreign policy today? Many people would scoff at such a question. But in looking at the decisions this administration is making, I’m hard-pressed to think of any that don’t have the effect of weakening America and strengthening the forces of evil in this world.

This too is an indication of Satan being cast down and exerting his influence at the highest levels. Every decision they are making in foreign policy and just about everything else is dangerously wrong. And we need to prepare ourselves for more terrible decisions.

Is there any other explanation for why President Obama’s biggest foreign-policy “achievements” were deals with enemies of the United States? In his eight years in office, dictatorships flourished and the world became more unstable. The “Obama doctrine” was a carefully engineered policy to destroy America. Mr. Flurry explains:

The irrational foreign policy of Obama is back stronger than ever, and as Mr. Flurry says, we need to “prepare ourselves for more terrible decisions” from this current administration. Please read America Under Attack to see how all these terrible events will lead to the best news that will ever be reported.