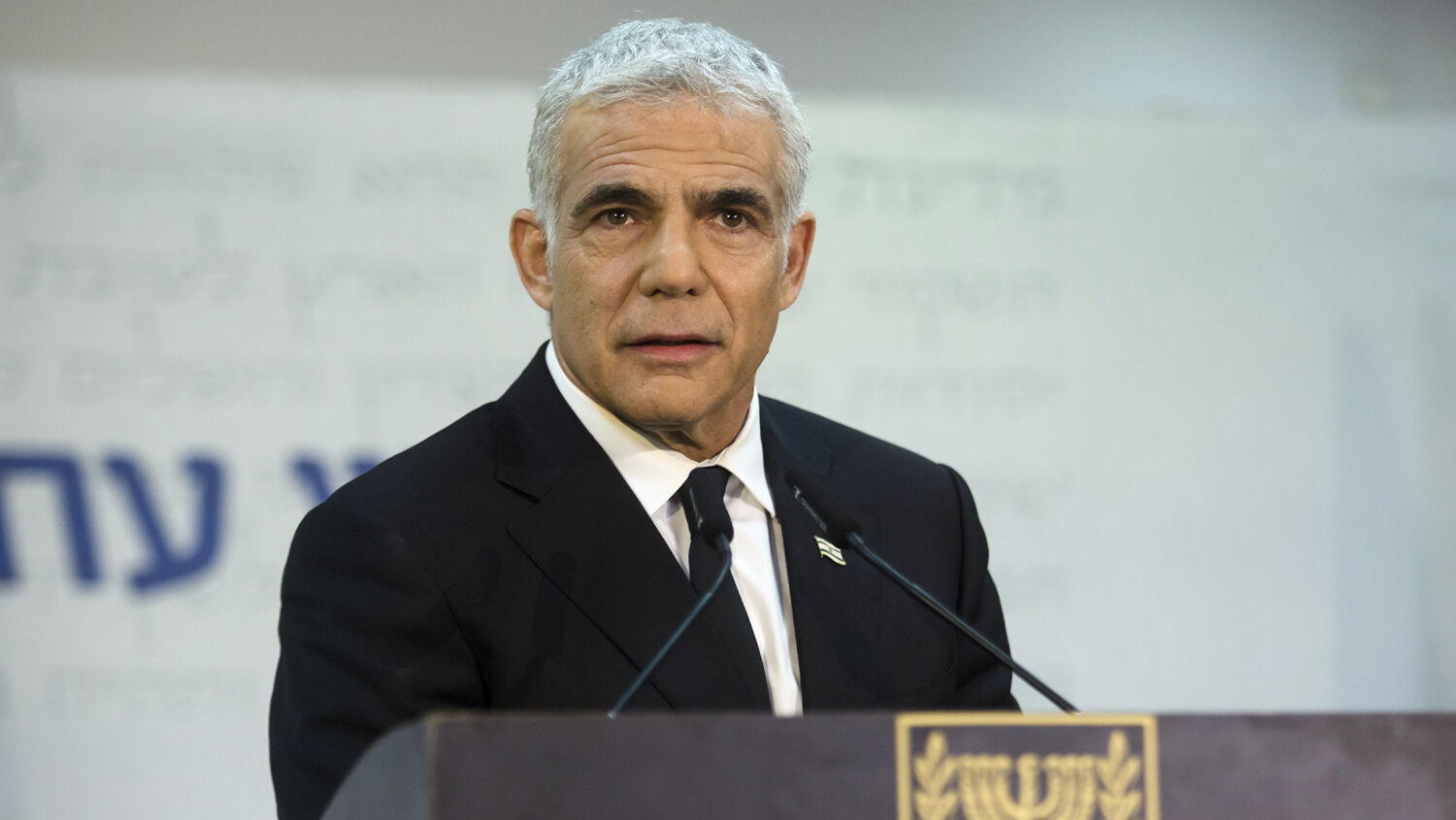 Is the hatred of Jews really ‘no different’ from any other?

What is anti-Semitism? The definition, as represented by the new Israeli unity government, has evidently changed rather dramatically. Some have praised the new interpretation as “groundbreaking,” “a foundational event in the history of Israel”; others have condemned it as “scandalous and irresponsible,” “a real danger.”

Israeli Foreign Minister (and rotational Prime Minister-in-waiting) Yair Lapid gave a short speech on July 14 at the seventh Global Forum on Combating Anti-Semitism. A key subject of the forum was the alarming rise of anti-Semitism on social media (such as the nearly 1,400 percent increase in anti-Semitic usernames). In his guest speech, he said: “For too long we’ve defended ourselves. Too many of us thought we needed to tell the right story about the Jews for the anti-Semites to stop hating us. I would like to offer you the opposite option: It’s time that we tell the right story about anti-Semites. It’s time that we tell the world what we face.

Anti-Semitism, in other words, is nothing unique; it is no different from violence against any other community. It is driven by entirely the same motivation.

To one side of the audience, the message sounded good—poetic, all-inclusive. Nir Guntaz, from the left-wing Israel newspaper Haaretz, was effusive in his praise for the speech and its importance, calling it a “foundational event in the history of Israel and maybe even in the history of the Jewish people. [T]he hatred of Jews is no different from any other hatred against any other religion or nationality. And as a derivative of this idea, nothing is unique about the Jewish people” (“Lapid’s Speech on Anti-Semitism Admitted Something Jews Rarely Admit”). The same sentiment was held by other Israeli journalists, such as Anshel Pfeffer and Orit Kamir.

Is the new definition that anti-Semitism is no unique phenomenon—but just like any other oppression and hatred—actually helpful? Not to several leading Jewish figures who were surprised and shocked by the speech. There was widespread criticism for Lapid’s view.

Former Prime Minister Benjamin Netanyahu, his own father a historian on anti-Semitism, rebutted the speech, saying that Lapid “offered a very limited and shallow understanding of the concept of anti-Semitism and determined that it is not the hatred of Jews but the hatred of all people, whoever they are. While the hatred of Jews, or ‘anti-Semitism,’ is part of an overall human phenomenon of xenophobia, it differs in its intensity, in the fact that it has persisted for millennia and in the idea that over generations, this murderous ideology laid the groundwork for efforts to exterminate the Jewish people. … This was a scandalous and irresponsible statement that distorts history and empties the very concept of anti-Semitism of all content. If all terrible violence is anti-Semitic then everyone is anti-Semitic and there is no anti-Semitism anyway.”

Lapid shrugged off the accusations from Netanyahu and other Israeli politicians, characterizing them as “attacks from the far right,” and saying that they were “aiding anti-Semites.” “I stand behind every word,” he said.

The Zionist Organization of America’s representative, Dan Illuz, wrote in a letter to Israel’s Foreign Ministry on July 19 that Lapid’s speech was “not only irresponsible, it poses a real danger to the war that we wage day after day against anti-Semitism. You played into the hands of haters of Israel when you also undermined the uniqueness of anti-Semitism. … As foreign minister of the State of Israel, you gave a speech that completely runs counter to the interests of the Jewish people. You damaged our ability to fight against anti-Semitism on campuses, in international organizations, in governments and in institutions.”

The Anti-Defamation League defines anti-Semitism as “the belief or behavior hostile toward Jews just because they are Jewish.” The International Holocaust Remembrance Alliance defines it: “Anti-Semitism is a certain perception of Jews, which may be expressed as hatred toward Jews. Rhetorical and physical manifestations of anti-Semitism are directed toward Jewish or non-Jewish individuals and/or their property, toward Jewish community institutions and religious facilities.” Lapid’s watered-down definition appears to be simply “hatred against people for who they are.”

Haaretz’s Gontarz wrote in his defense of Lapid (emphasis added):

[W]hat then was so special in the short speech that triggered such a major reaction? Between the lines, Lapid made the most simple and correct claim, but one that angered all those who argue and live their lives from a perspective of Jewish supremacy. Lapid denied one of the fundamental principles of the Jewish people when he said that the Jewish people is the same as all other peoples—no longer the “chosen people” or “a light unto the Gentiles.”

Those are certainly inflammatory words from an Israeli publication (but not unusual for the deeply left-wing Haaretz).

Of course, horrific violence exists against other cultures in the world. The Rwandan Genocide is an especially recent and bloody example. But there is a difference. The Tutsis have not faced oppression worldwide, throughout their entire history, by all walks of society.

There is nothing like anti-Semitism. It is utterly unique. It is prevalent all around the world. It was seen recently in protests over the Gaza conflict, with Jews run out of restaurants and assaulted in the streets of New York, London and other major Western cities. Street attacks and other anti-Semitic incidents—particularly in Western nations—are a regular, almost daily occurrence.

Then there are the bigger, state-coordinated attacks. The Germans famously took their opportunity to extinguish the Jewish people, and succeeded in wiping out two thirds of the Jewish population across the European continent, killing 6 million Jews. The repeated Russian pogroms as well as massacres and pogroms in Poland, Ukraine, Morocco, Iran, Lithuania, Mongolia, Moldova, Afghanistan, Turkey, Algeria, Ecuador, Austria, France, Iraq, Tunisia, Romania, Mandatory Palestine, Latvia, Libya, Hungary, Egypt, Syria, Yemen, the Caucuses and more led to the deaths of hundreds of thousands more Jews.

And all of these above cases are just the ones in living memory.

Not to mention the numerous historical examples: the Spanish Inquisition; the Black Death, blamed on the Jews, which itself led to the killings of many thousands; the repeated, near-extermination of the Jewish people by the Roman Empire; massacres and oppression by the Byzantines, the Sassanids, the Babylonians, the Assyrians—and the list goes on.

Are we to believe that “the hatred of Jews is no different from any other hatred … nothing is unique about the Jewish people”? This is false. There is clearly no hatred like anti-Semitism; no hatred that can so collectively unite people from all walks of life.

This begs the question of why the virulent hatred of anti-Semitism. As Trumpet editor in chief Gerald Flurry writes in his booklet The Key of David, “Most people who hate the Jews don’t even know why they do.” What is the reason for it?

Given that the inverse of Gontarz’s article (and Lapid’s speech) is true, that anti-Semitism is a unique xenophobia, then it stands to reason that the inverse of his other claims are also true: Jews are different; they are the “chosen people,” a “light unto the Gentiles.” Jesus Christ Himself stated, in the New Testament, that “salvation is of the Jews” (John 4:22). As described throughout the Bible, the Jewish people have been central to God’s plan for the salvation of all mankind.

It is for that very reason they are persecuted.

Yet that by itself does not explain the uniquely irrational, illogical, rabid and mindless violence toward Jews throughout history by all manner of peoples—many of whom can’t coherently explain why. After all, isn’t recognizing the Jews as special in history, as God’s chosen people, simply a matter of personal opinion and belief? Many anti-Semites today do not believe the Bible as true or binding, neither are knowingly driven by (nor probably even know of) such biblical assertions. Why should such statements of faith and personal belief warrant such reactions? (Indeed, Jews throughout history have been blamed and targeted not only directly for their religion but for just about every conceivable problem under the sun—everything from pandemics to poverty.)

By the same token, Adolf Hitler considered the Germans as specially chosen by God to replace the Jews. The Japanese believed their people to be superior to all others, and reverenced their emperor as a god. Yet their people, after committing some of history’s greatest atrocities that are still in living memory, are not persecuted, but are held up on a pedestal as two of the most powerful and highly respected nations in the world.

The difference with the Jews is that there is evidently truth to the biblical assertion. Further, the Bible explains the source and rationale of anti-Semitism’s unique irrationality. It is tied directly to the original father of lies and murderer himself, Satan the devil, who “deceives the whole world” (John 8:44; Revelation 12:9). Anti-Semitism, a persecution that is so irrational to man, is perfectly rational to this “accuser of our brethren” (Revelation 12:10)—after all, the Jews, the tribe of Judah, are key not only to salvation but also to the overthrow of Satan’s rule upon this Earth (e.g. Genesis 49:10; Daniel 2:31-44; Zechariah 14:13-16; Revelation 19:11-20). And so his hatred is poured out against both physical and spiritual Israel, the people whom God has chosen. His anger toward the Jews is channeled into the minds, moods and emotions of people all over this Earth (Ephesians 2:2).

“… Woe to the inhabiters of the earth and of the sea! for the devil is come down unto you, having great wrath, because he knoweth that he hath but a short time” (Revelation 12:12). Satan’s time as ruler over this Earth is just about up. His control over this world is about to be overthrown by the coming of the Messiah—of the tribe of Judah.

This, then, explains the unique hatred against the Jewish people, and why anti-Semitism has proved so uniquely and repeatedly deadly and dangerous throughout history. But it also explains how dangerous—really, how satanic—it is to water down its definition, to treat it as “nothing to see here”—while still tragic, yet an entirely ordinary phenomenon in the world. It’s not.

For more information on this subject of anti-Semitism, read Richard Palmer’s article “The One Minority Society Loves to Hate.”