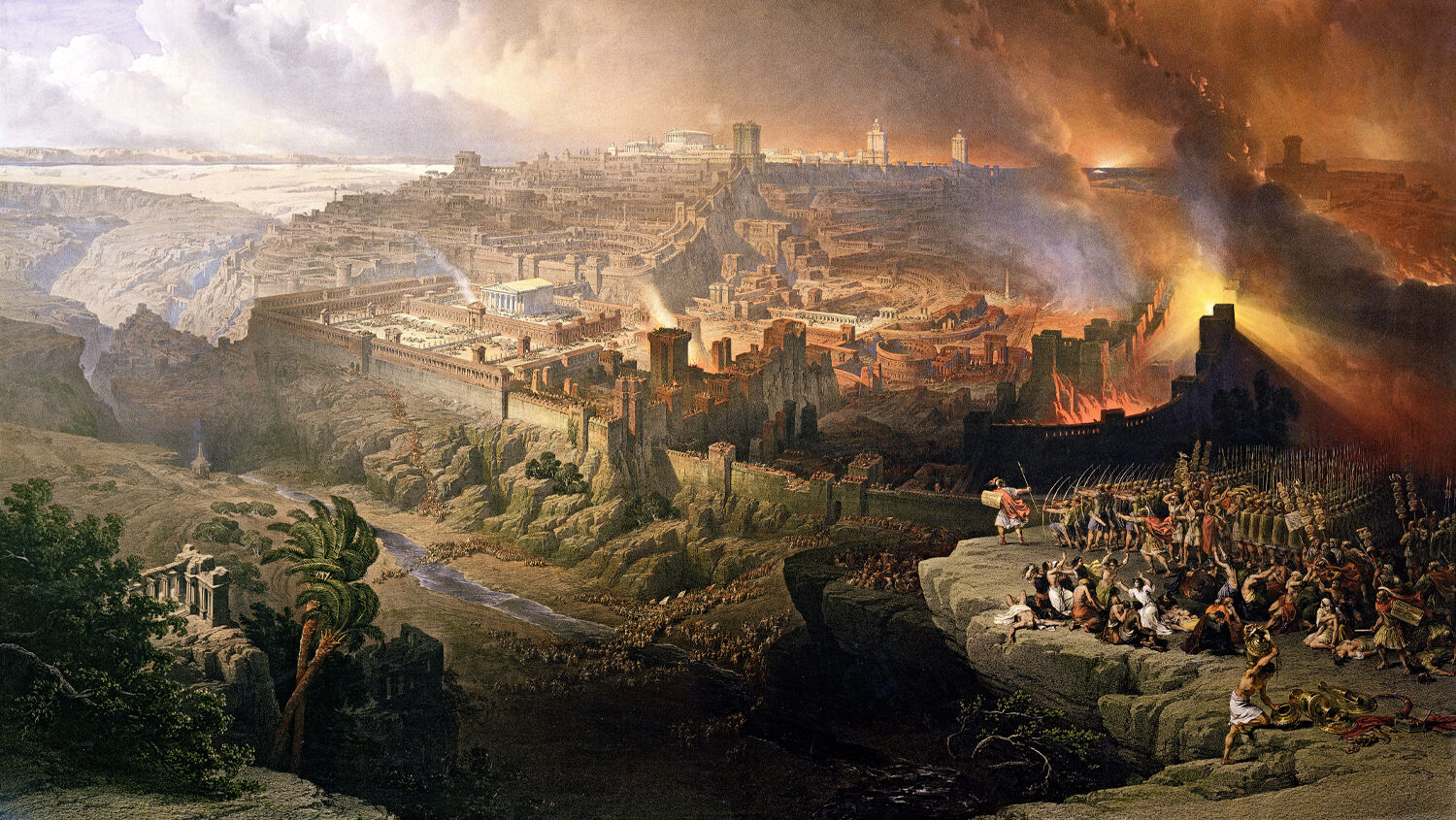 Reflecting on the Jewish day of mourning

This year, July 18 is the ninth day of the fifth month (Av) on the Hebrew calendar. Jews around the world will commemorate the 9th of Av (Tisha B’Av) as a day of mourning and remembrance. According to the biblical record and Jewish tradition, as well as secular history, Tisha B’Av is associated with catastrophe to the Jewish people. Many notorious events have happened on or near that date in history for thousands of years.

The most notable event was the destruction of Solomon’s temple in 585 b.c. by the Babylonians. 2 Kings 25:8 says the Babylonians came to Jerusalem on the 7th of Av. According to the Talmud, the temple itself was set on fire on the 9th.

The Jews were allowed to have some presence in the Holy Land for a few more decades, but Jerusalem lay in rubble. Roman Emperor Hadrian wanted to rebuild Jerusalem—as a Gentile city, populated by Roman military veterans. That was more than many Jews could take. Led by Simon Bar-Kokhba, they revolted. The Romans absolutely crushed the Jews. The conflict concluded on Tisha B’Av, a.d. 135. Hadrian then decreed that Jews were forbidden from living in the Holy Land. He renamed the region “Syria Palestina.”

Jewish persecution continued into the Middle Ages. In 1290, King Edward i evicted all Jews from England on Tisha B’Av. The date on the Roman calendar was July 18, the same date of 2021’s Tisha B’Av.

At the dawn of the early modern period, in 1492, the Catholic Spanish under Ferdinand and Isabella conquered the last of the Muslim Moorish kingdoms. Most of Spain was ruled by the Moors during the Middle Ages. They were comparatively tolerant to the Jews and allowed them to practice their faith. Because of this, Spain had a vibrant and thriving Jewish community. But on the 7th of Av, 1492, the king and queen of Spain announced the Alhambra Decree: All Jews in their realm had to either convert to Catholicism or leave. What was once one of the healthiest Jewish communities in Europe became scattered around the Mediterranean.

In 1994, on the 10th of Av, the infamous bombing of the amia Jewish community center took place in Buenos Aires, Argentina. Eighty-five people were killed, and 300 were injured.

Tisha B’Av has a historical legacy of tragedy and catastrophe for the Jewish people.

Although not commanded in the Bible, Jews observe this day by fasting from sunset to sunset. The only other day Jews do this is on the Day of Atonement, the solemnest day of the year in the biblical calendar (Leviticus 23:32).

Traditionally, the book of Lamentations is read on the 9th of Av in synagogues. Lamentations is probably the most somber book in the Bible. Written by the Prophet Jeremiah (2 Chronicles 35:25), the book describes the horror and terror of Jerusalem’s destruction by Babylon.

The book has some of the most tragic—and beautiful—poetry in the Bible. Notice some passages:

“How lonely sits the city
That was full of people!
How like a widow is she,
Who was great among the nations!
The princess among the provinces
Has become a slave!
She weeps bitterly in the night,
Her tears are on her cheeks;
Among all her lovers
She has none to comfort her.
All her friends have dealt treacherously with her;
They have become her enemies”
(Lamentations 1:1-2; New King James Version).

“All our enemies
Have opened their mouths against us.
Fear and a snare have come upon us,
Desolation and destruction.
My eyes overflow with rivers of water
For the destruction of the daughter of my people.
My eyes flow and do not cease,
Without interruption,
Till the Lord from heaven
Looks down and sees.
My eyes bring suffering to my soul
Because of all the daughters of my city”
(Lamentations 3:46-51; nkjv).

“How the gold has become dim!
How changed the fine gold!
The stones of the sanctuary are scattered
At the head of every street.
The precious sons of Zion,
Valuable as fine gold,
How they are regarded as clay pots,
The work of the hands of the potter!”
(Lamentations 4:1-2; nkjv).

These verses describe the destruction of Solomon’s temple over 2,500 years ago. But the Jews—and Jerusalem specifically—have lived through the nightmares described in Lamentations over and again.

If there is one lesson we can take from Tisha B’Av, it is that calamity keeps coming. No matter where Jews are in the world, no matter the historical era or epoch, catastrophe follows them.

It seems as if the Jews, in their millenniums-old history as a nation, have had more persecution hunting them down than any other ethnic group. No other ethnic group has had so many attempts to completely wipe it out for so long.

There is a reason for this.

“The Bible is clear that God the Father has a plan for mankind, and that the Jews have a unique role in this plan,” theTrumpet.com assistant managing editor Richard Palmer wrote in 2019. “Most of the Old Testament is a history of the Jews and the other tribes of Israel. Even the New Testament has a lot to say about Jews.”

The Bible reveals that ancient Israel, of which the Jews were one tribe, was chosen by God to be a model nation to the rest of the world. In Exodus 19:6, God calls for Israel to become “a kingdom of priests, and an holy nation.” Deuteronomy 4:6-7 show that ancient Israel was chosen to point the nations of the world to God. Romans 3:1-2 state that unto the Jews “were committed the oracles of God [the Holy Scriptures].” Genesis 49:10 shows that the Messiah would come from the tribe of Judah.

This unique calling of the Jewish people has everything to do with why they are persecuted as they are.

The Bible also reveals that there is a devil who hates God and relentlessly seeks to destroy His plan (John 8:44; 2 Corinthians 4:4; Revelation 12). It is not fashionable to talk about him today. But it’s impossible to believe what the Bible says and fail to recognize the devil’s existence. Ephesians 2:2 says the devil influences people’s moods, feelings and emotions. He is the ultimate author of jealousy, anger and hatred. …

Satan has a special hatred for Jews. He is the ultimate source of anti-Semitism.

Why this special hatred? Because of the Jews’ special role in God’s plan.

This is the main reason why the Jews keep having tragedy after tragedy—tragedies like the ones that hit them on Tisha B’Av.

Should we expect more calamities to strike the Jews?

After all, the Jews have only been in control of their own state since 1948. They’ve only controlled all of Jerusalem since 1967. The last “Jewish states” were crushed by the Babylonians and Romans.