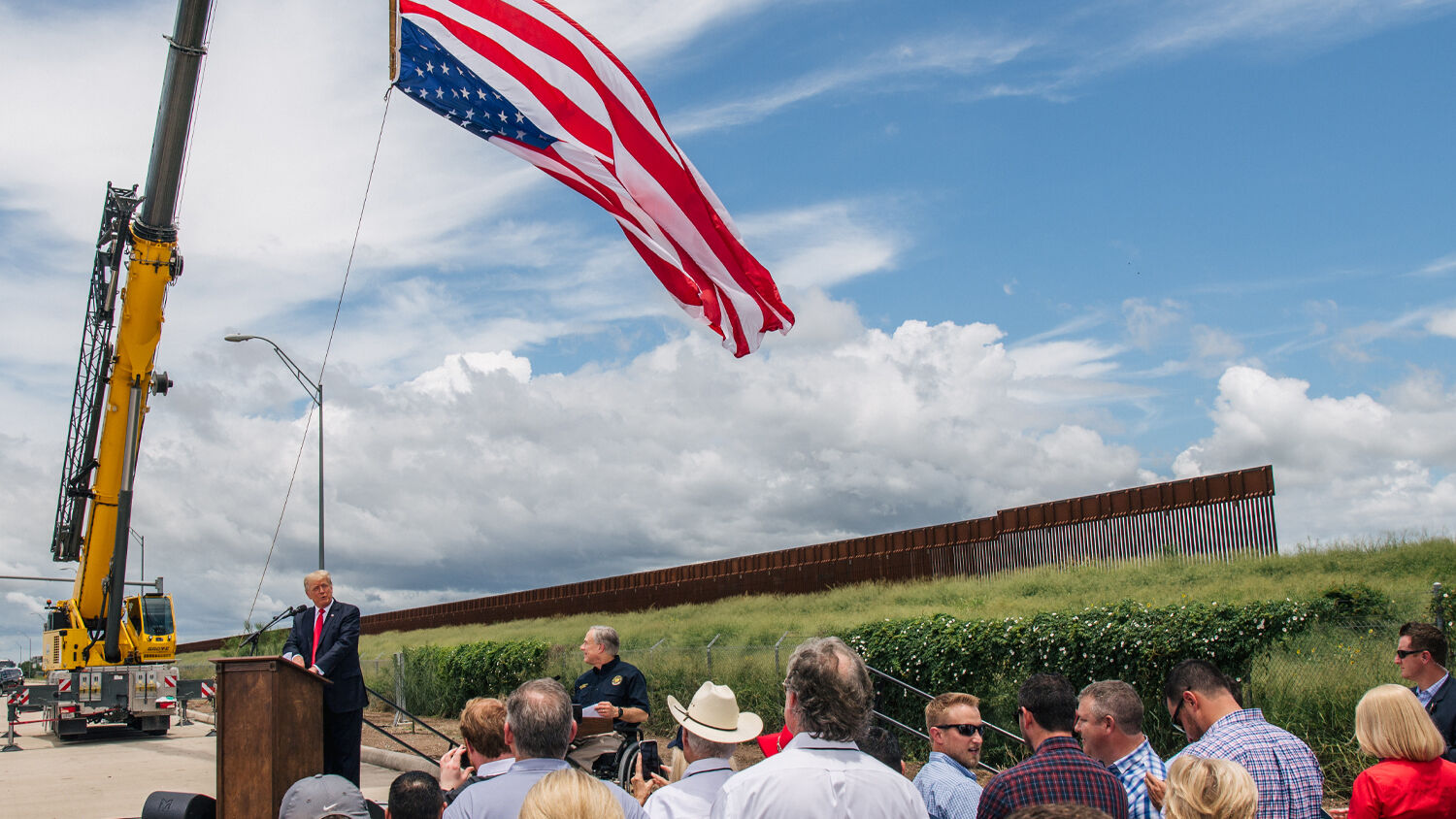 People listen to President Donald Trump’s address near an unfinished section of the border wall on June 30 in Pharr, Texas.
Brandon Bell/Getty Images

‘Biden is destroying our country, and it all started with a fake election.’

Biden’s job approval ratings on immigration lag his poll numbers on other issues considerably. A recent poll by the Associated Press and the norc Center for Public Affairs Research found that only 24 percent of adults approved of the way Biden was handling the flood of migrant children into the country. Even among Democrats, only 44 percent of poll respondents approved of how Biden was handling this crisis. Unchecked immigration is undermining confidence in the Biden administration and could prove to be Joe Biden’s Achilles’ heel if the crisis continues much longer.

When Harris made her first trip as vice president to the nation’s southern border on June 25, she deliberately visited El Paso to keep the media far away from crisis areas. “They took her to a point in the border where she wouldn’t see the crisis and so the press wouldn’t report on the crisis,” Sen. Ron Johnson told Fox News. “And of course, that’s what’s been going on. … We literally are apprehending now about 6,000 people per day. That’s … a large caravan every day being processed, some of them being returned, others are being dispersed. But this crisis is not going away.”

Donald Trump did not make this mistake when he visited the border with Texas Gov. Greg Abbott on June 30. The two leaders visited Weslaco, Texas, which is near the crisis area. During the visit, President Trump held a roundtable meeting with Governor Abbot and later visited a portion of the unfinished border wall. During the roundtable, President Trump warned that America is in a sick state. “We have a sick country in many ways,” he said. “It’s sick in elections, and it’s sick on the border. If you don’t have good elections and if you don’t have a strong border, you don’t have a country.”

During his visit to a segment of the border wall, President Trump addressed a crowd of supporters, explaining how the Biden administration is destroying America. “All Biden had to do was go to the beach,” he said. “If he had just done nothing, we would now have the strongest border we have ever had. It was even getting better and better.” President Trump then told how Central American nations refused to take deported immigrants from U.S. officials until he threatened to cut off aid to these nations. Then they started letting America send illegal immigrants back to their home countries, and border crossings dropped dramatically once people heard that Trump would not let them stay.

Now, the Biden administration has stopped construction on the border wall and let Central American nations know that the U.S. will give them aid whether or not they accept deported criminals. Border crossings have increased 700 percent in the last 12 months.

“Biden is destroying our country and it all started with a fake election,” said Trump.

President Trump also made it a point to highlight how much fentanyl from China is pouring into the United States via Mexico. Trump spokesperson Liz Harrington said in a statement to Newsweek: “President Trump is adamant about holding China accountable, not only for the virus but for the unprecedented amounts of deadly fentanyl now being allowed to pour into the United States by Joe Biden.” Federal agents say the powerful synthetic opioid is becoming a drug of choice for Mexican cartels because it’s highly profitable and easier to smuggle than other drugs.

Media reports describe the fearsome surge of migrants pouring across the border, but America’s leaders refuse to do anything about it. So the flood of foreigners will continue for months to come!