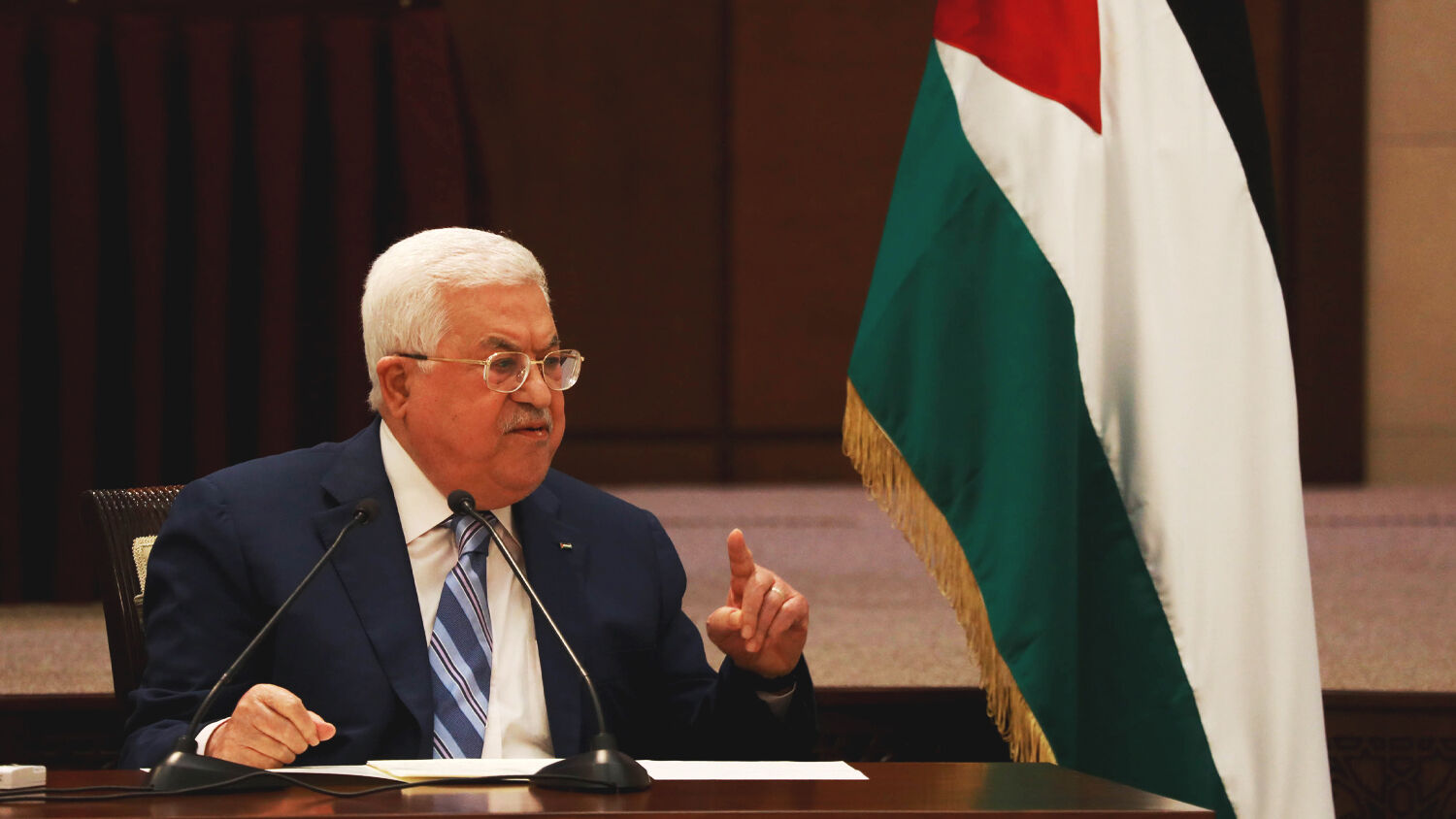 An America-induced Arab Spring is making its way to the West Bank. And again, it’s the Islamists who will benefit.

jerusalem
The relationship between Israel and the Palestinian Authority can be difficult to follow. Often, things are not as they seem.

For example, Israel loudly condemns PA President Mahmoud Abbas for his dictatorial rule over the West Bank. Yet at the same time, Israel maintains an extremely close security partnership with the Palestinian security forces that perpetuate Abbas’s stay in power. In fact, as former Prime Minister Benjamin Netanyahu once boasted, without Israel’s security partnership with the Palestinian Authority, Abbas wouldn’t last a week.

It is reasoned that even though Abbas is a dictator who rules over the West Bank with absolute power, even though he oversees and orchestrates regular payments to the families of terrorists currently sitting in Israeli prisons, and despite the fact he is prone to fiery rhetoric against the Jewish state, Abbas’s continued rule is at least better than the alternative.

And currently, the only other alternative is Islamist rule in the West Bank of the Hamas variety. If that happened, rockets wouldn’t just be flying into Israel from the Gaza Strip but from the West Bank as well.

“Today, if there were elections, we would have the Islamist parties winning the elections in the West Bank,” Sari Nusseibeh, a Palestinian professor of Philosophy and former president of the al-Quds University in Jerusalem, said in a Jerusalem press briefing on Wednesday. According to Nusseibeh, Hamas is currently riding high in the West Bank after what is viewed as a successful mini-war against Israel and extreme dissatisfaction with Abbas’s rule.

His comments follow the results of a large Palestinian poll conducted from June 12 to 14 that highlighted the dramatic shift away from Abbas in support of Hamas. The poll found that 53 percent of Palestinians believe Hamas is “most deserving of representing and leading the Palestinian people,” while only 14 percent prefer Abbas’s secular Fatah party.

This swing in support toward Hamas following the Gaza skirmish had Israel and many of the more pragmatic Palestinians worried for the near future.

This was even before large Palestinian demonstrations erupted on the streets of the West Bank over the past two weeks.

Following the Gaza skirmish, Abbas’s security forces directed a brutal crackdown on dissenting Palestinian voices. In some instances, his critics have been rounded up, beaten and tortured for their condemnation of Abbas’s rule. This culminated in the June 24 murder of longtime anti-Abbas critic and human rights activist Nizar Banat at the hands of PA security forces.

Since that time, legitimate protests against Abbas have increased.

Because of the rise of Islamist parties, however, many Palestinians who long to be rid of Abbas also warn against his hasty removal.

“I think the presence of Abbas is illegitimate and harmful and he should pack up and leave,” stated Professor Nusseibeh. “[Abbas] has become an authoritarian leader; a dictator. He has become an invisible dictator.” Nevertheless, like many circumspect Palestinians, Nusseibeh doesn’t see an alternative right now: “We do not wish for our demand that he leave us right now. This would be a step toward a total stage of chaos …” (emphasis added throughout).

Seeing the popularity of Hamas inside the West Bank, Nusseibeh senses that it would be better to wait another six months to a year before attempting to hold legitimate elections. If Abbas were to step down right now, Islamists would capitalize on the chaos.

Yet contrary to the wishes of many Palestinians, the political upheaval spreading through the West Bank against Abbas might have already passed the tipping point.

In scenes reminiscent of the 2011 Arab Spring, many youths are starting to join the popular protests to topple Abbas. “The people want to bring down the regime,” protesters have chanted, an echo of the slogan used in Tunisia over a decade ago that kicked off the Arab Spring.

And now that same slogan is being heard in the streets of Ramallah and Hebron to remove the Palestinian dictator. Still, given Abbas’s power over the Palestinian security forces, as well as Israel’s security partnership, it’s unlikely the voices in the street would ever become powerful enough of themselves to topple Abbas.

But as we learned during the Arab Spring a decade ago, sometimes it just takes the pressure of the United States to bring down a dictator.

During the Arab Spring, the biggest scalp claimed by the protesters was Egyptian President Hosni Mubarak’s. Excited by the possibility of change, hundreds of thousands of Egyptians took to the streets to call for the ouster of the longtime American ally. Yet it was only after Mubarak lost the support of U.S. President Barack Obama that Egypt’s protesters could claim victory.

Obama loudly and publicly called for Mubarak to step down. Mubarak’s hasty removal from power led to the election of the Islamist Muslim Brotherhood under the leadership of Mohamed Morsi.

Recalling that history, consider what esteemed Palestinian journalist Khaled Abu Toameh wrote for the Gladstone Institute on June 20, just days before Nizar Banat was killed by PA security forces. Is the Biden administration about to topple Abbas as Obama did Mubarak? Toameh wrote:

Did the Biden administration give the Palestinian Authority (PA) a green light to resume its security crackdown on social media users, political activists and rivals in the West Bank?

Since U.S. Secretary of State Antony Blinken’s visit in late May to Ramallah, the de facto capital of the Palestinians, PA security forces have arrested or summoned dozens of Palestinians for interrogation. …

The Biden administration, in short, seems to be sending a message to the Palestinians that the U.S. supports Arab dictatorships that suppress and imprison political activists and opponents and that block the emergence of new and young leaders.

According to Toameh, it’s possible that, behind the scenes, the United States was green-lighting Abbas’s crackdown on dissent. Of course, this would make it seem like the U.S. supports the longevity of Abbas’s rule. In actual fact, it’s more likely the Biden administration gave Abbas a free pass knowing it would further inflame the Arab street to rise up against him.

The silence of the international community and the Biden administration’s blind and unqualified support for the PA encourages the Palestinian leadership to step up its repressive measures against Palestinians.

When Palestinians despair of any improvement in the PA leadership, they move towards Hamas and other terrorist groups that are seen by many Palestinians as a better alternative to Abbas and his Fatah faction.

It is hardly surprising, then, that the most recent public opinion poll showed a dramatic surge in the popularity of Hamas among Palestinians. What should be surprising—and disturbing—is that the Western world is directly aiding and abetting this bloody shift of allegiance.

Put simply, by green-lighting Abbas’s crackdown, the Biden administration is encouraging a widespread shift in Palestinian support against Abbas’s own rule in favor of the Islamists.

As happened with Mubarak, how soon will it be before the Biden administration publicly calls for Abbas to step down and calls for democratic elections of the Palestinians—elections which Hamas, a child of the Muslim Brotherhood, will win?

The parallels between the Obama-era policy to bring down Mubarak in favor of Islamist rule and what is taking place now on the Palestinian street are too similar to ignore.

Consider too Biden’s personal choices in relation to the Palestinians. Last month, Joe Biden’s representative, Hady Amr, was in Israel talking with Palestinian officials. Details of those discussions are closely held, but consider that in 2019, Amr wrote that Hamas ought to be included in peace talks with Israel. A decade before that, Amr was also ostensibly on the payroll of the Qatari government via the Doha center of the Brookings Institution. Qatar is the chief financial backer for the Muslim Brotherhood and Hamas. Consider too that Amr is slated to be the consular general of a soon-to-be-opened, yet illegal, U.S Consulate for Palestine operating out of Jerusalem.

Then there is Tom Nides, Biden’s upcoming pick for the United States ambassador to Israel, announced on June 15. Nides spent critical time with Barack Obama’s State Department from 2011 to 2013, acting as deputy secretary of state. Crucially, he was instrumental in furthering ties between the Muslim Brotherhood and Obama’s government as then Israeli Ambassador Michael Oren documented in Ally. Oren wrote:

Contrary to the assurances I had received that the [Obama] administration would not engage the Islamist movement, the State Department formally initiated ties with Brotherhood leaders in January 2012. Six months later, after the election of the movement’s leader, Mohamed Morsi, to the presidency—by just over 51 percent of the vote—those contracts became an embrace. Deputy Secretary of State Tom Nides led a delegation of 100 American businessman to Cairo to shore up the new government financially.

This means that the two men set to lead the Biden administration’s outreach to Israel and the Palestinians either have close ties to the Muslim Brotherhood or were instrumental in attempting to solidify its rule in Egypt under Barack Obama. Given their history, are both men about to use those connections to be part of a new, post-Abbas American embrace of Hamas?

As we wrote in the April 2021 issue of our sister publication Watch Jerusalem, Biden’s policies show that Barack Obama is back in the Middle East.

Based on biblical prophecies and a knowledge of recent history, we are able to plot much of the foreign-policy moves of the Biden administration. As we wrote months ago, “Realistically, that means Israel may soon be pressured by the Biden administration to negotiate peace across the table from not only Fatah but also the extreme, Iran-aligned Hamas terrorist organization.” Now with the Palestinian Spring already erupting, it’s only a matter of time before the U.S. calls for Abbas’s removal from power, knowing full well that Hamas will benefit.

As with Obama’s first two terms, it is clear that the current administration in the White House is no friend of Israel. And just as the U.S. sided with Iran and the Muslim Brotherhood at the expense of Israel and its other allies, be prepared for it to happen again.

The reasons for such a massive shift in American policy is a mystery to most people, yet it does not have to be. In his article, “The Barack Obama Mystery,” Trumpet editor in chief Gerald Flurry explained why an American president could so readily turn on the nation’s long-standing alliance with Israel. If you are concerned about where this break of the historic brotherhood will lead, please read “The Barack Obama Mystery.”