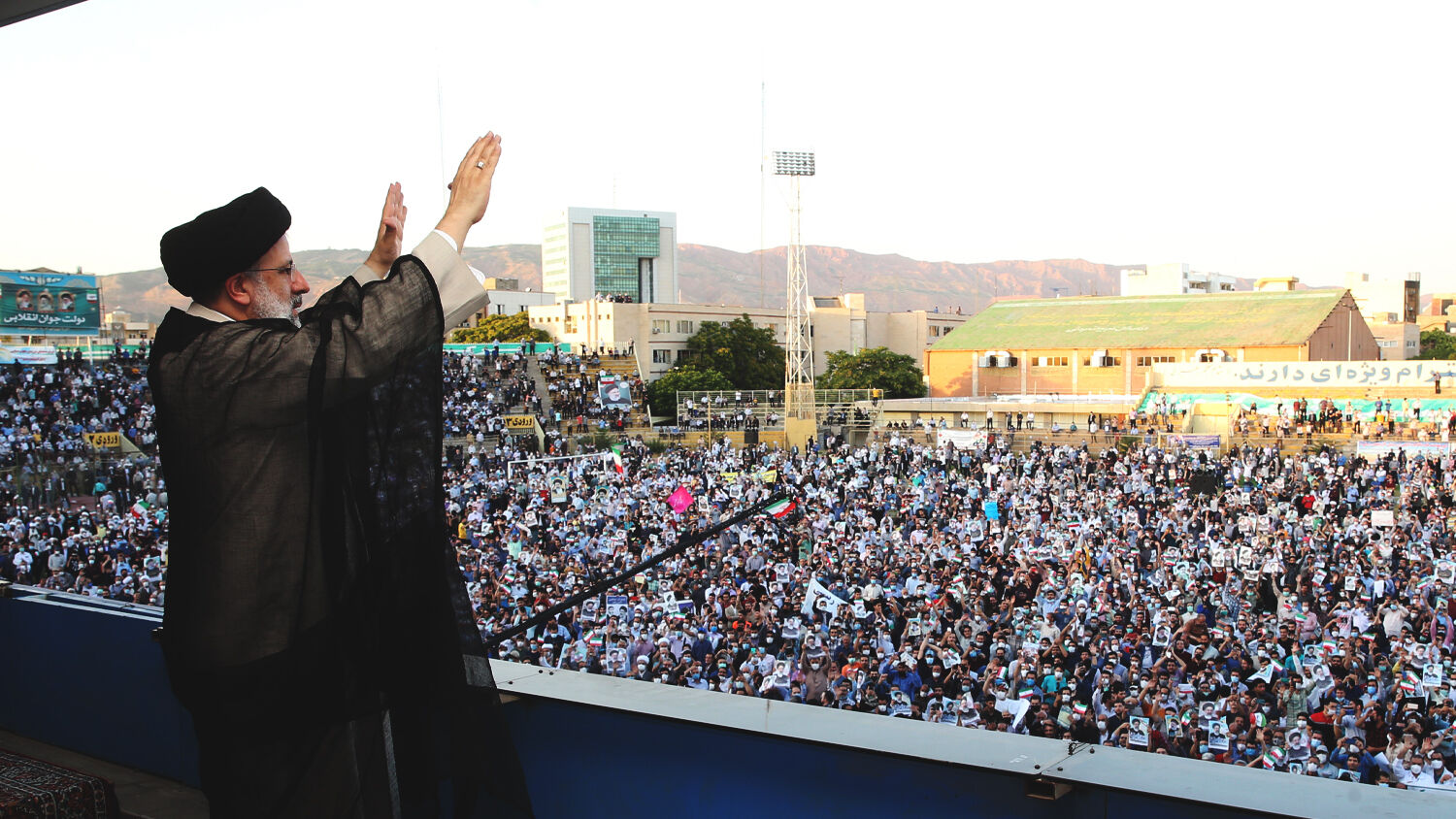 With fruits of ‘divine intervention’ the Islamic Republic is filled with unchallenged confidence in its mission.

jerusalem
Typically, Iran’s elections are a rigged affair. This isn’t achieved only by fudging the numbers. It’s also done by a highly effective mechanism ensuring that only the candidates that the Supreme Leader Ayatollah Ali Khamenei deems acceptable make their way to the ballot. This feigning of the democratic process isn’t new; it happens every four years.

But even by Iran’s standards, the rigging in today’s election has reached a new level. “This time, they are not even trying to play the game,” stated Iranian expert Dr. Thamar Eilam Gindin yesterday to a press group organized by Jerusalem-based Media Central. “Usually, everyone knows that, but they try to make it look like [they are legitimate],” Gindin continued. But this time, the process of selecting the candidates for the election was unabashedly undemocratic, leaving no mistake who the ayatollah wants to become president.

In this election, the number of people who tried to make the ballot was 598, a third of the number of previous elections. Of those, only seven were selected by the Guardian Council, a 12-person body loyal to the ayatollah that vets candidates. And of those seven, most are hard-liners associated with the clerical regime or the Islamic Revolutionary Guard Corps. Usually, some pragmatists and reformists make this cut to at least present the ruse to foreign media that there are “moderate” elements inside Iran’s political Islamist system. This year, there is only one, and he is considered a far outside shot.

The regime’s preferred choice is ultraconservative cleric Ebrahim Raisi. According to Gindin, Raisi is being groomed to replace the aging Ayatollah Khamenei as the supreme leader of the regime in the near future. To increase his credentials for that job, it would be helpful if he becomes president first. Nevertheless, even if it isn’t Raisi who “wins” the vote, another of his ilk will fill the role.

What this election means is that the Islamic regime is dispensing with the need to play the game with the West that it is open to democratic change toward moderation. They are no longer trying to put forth candidates, such as current President Hassan Rouhani, to soften the image of the Iranian regime.

In 2013, the election of “moderate” Rouhani was a critical part of then United States President Barack Obama’s narrative to sell the Iranian nuclear deal to the American people. The mainstream media championed the nuclear deal based on that logic. Of course, that was just the narrative inspired by Obama deputy Ben Rhodes. As we now know, Barack Obama had actually started secret nuclear negotiations behind Israel’s back with Rouhani’s predecessor, Mahmoud “wipe-Israel-off-the map” Ahmadinejad.

As it turned out, former Israeli Prime Minister Benjamin Netanyahu was right when he called Rouhani a wolf in sheep’s clothing and Ahmadinejad a wolf in wolves’ clothing.

On today’s ayatollah-inspired ballot in Tehran, there are only wolves in wolves’ clothing, bar one. It’s all but certain that Iran’s next president will be a wolf, and that is just the way the ayatollah wants it.

This highlights a big change in confidence in the image the Islamic Republic wishes to send to the world, and particularly the United States.

In 2013, with a nuclear deal and sanctions removal on the table, the ayatollah thought it important to present a moderate for the United States to deal with.

In 2021, again with a nuclear deal and sanctions removal on the table (after President Donald Trump’s 2018 withdrawal), the ayatollah does not feel the need to placate the West. “If sanctions relief will be on the table no matter who is at the helm, then Khamenei may feel safe enough to ditch the window-dressing,” wrote Saeed Ghasseminejad and Behnam Ben Taleblu this week in Al Arabiya.

So confident is the ayatollah that the Biden administration will yield in nuclear negotiations that he has dispensed with sheep’s clothing altogether.

The ayatollah is declaring that the Islamic Republic of Iran is here to stay. And he is absolutely sure that the Biden administration will bring sanctions relief to Iran, even while hoisting the regime’s fanatical colors up the mast for all to see.

Outside of the Biden administration’s desire for a deal at any cost, what else has inspired this shift in confidence for the ayatollah?

“The Iranian regime is the mood of divine intervention,” stated Ret. Lt. Col. Michael Segall of the Jerusalem Center for Public Affairs in the same Jerusalem press briefing on Thursday.

As Iran sees it, “they outlasted the Trump administration, and now they outlasted Netanyahu. Then we saw during the last round in Gaza with Jerusalem being inserted, and with Iran’s international Quds in right in the middle. They see things as divine intervention in the Iranian regime interest,” Segall continued.

As Segall related, Iran no longer feels it necessary to hide its real goals behind plausible deniability. “Iran sees the bigger picture is good for Iran. They are not afraid to say things that they were in the past,” he said. Iran used to hide its support for terrorist proxies in the region, but now it openly shows its support for Palestinian terrorist groups, Shiite militias in Iraq, and the Houthis in Yemen. “They are not trying to care anymore. They are not hesitating to say that they are here to stay,” Segall said.

Put another way, the ayatollah is telling the world—and particularly the West: Yes, we are a religious regime that won’t let anything overthrow our clerical rule. Yes, we will continue exporting the Islamic revolution across the world, supporting and arming like-minded terrorist organizations as we see fit. And yes, we also have a nuclear program and are on route to obtaining nuclear weapons and the delivery systems to use them. What are you going to do about it?

Such boldness from Iran during an election cycle is new. It is the direct result of years of appeasement by the West and particularly the United States. In fact, as Trumpet editor in chief Gerald Flurry wrote in “The Barack Obama Mystery,” Iran’s current emboldened state is the purposeful fruit of Obama’s Middle East policy, a policy Joe Biden continues to this day.

It is also a confirmation that unless a stronger power sends a resolute message to Iran to get back into its box, the Middle East and the world face a grim near future. That message will not be sent by the Biden-led United States, nor a Netanyahu-less Israel.

In the longer term, biblical prophecy informs us that it will take a resurgent German-led Europe to face down Iran’s pushy foreign policy once and for all. This is explained in detail in Mr. Flurry’s free booklet The King of the South. In that booklet, Mr. Flurry shows that Iran will gain king-like status in the Middle East, leading a number of other nations into an alliance that will eventually come knocking at Europe’s door. This conflict is detailed in Daniel 11 and actually foretells the major future events in the Middle East that will culminate in the return of Jesus Christ.

Yet as that chapter also explains, Iran must first gain more power and influence in order to make its prophesied violent “push” against Europe.

As evidenced by Iran’s newfound confidence in the election, are we about to see Iran boldly and shamelessly proceed to violently shake up the Middle East through its proxies? Hamas’s 10-day rocket war on Jerusalem was the first blow of what is likely coming.

Far from warmongering, this is reality based on what an emboldened Iran says it is going to do. History proves that belligerent powers that are constantly appeased only grow more confident. Iran’s 2021 election process led by the ayatollah is proof of this phenomenon.

Appeased nations have an insatiable desire for more power, unless and until superior force overwhelms. Such will be the case with Iran. History, Iran’s radical theology, and biblical prophecy all align to prove this will be the case.

And yet only biblical prophecy can inform of the true hope-filled conclusion to Iran’s quest for power. Contrary to the dark rhetoric and violent actions pronounced in the ayatollah’s fanatical doctrine, the Bible shows that true and loving “divine intervention” will be needed to put an end to the war that Iran starts. And that will come as sure as Iran’s rise.